The sword presented by Russian President Putin to Prime Minister Abe was displayed at the Dai Token Ichi on November 2017.

The meeting and exchange was very jovial, with President Putin joking with Prime Minister Abe, asking, “Should I wear the helmet while working?” The Japanese Minister of Economy, Trade and Industry, Hiroshige Sekō, who was also at the meeting, chimed in, saying, “I hope Prime Minister Abe doesn’t use the sword in the workplace!” 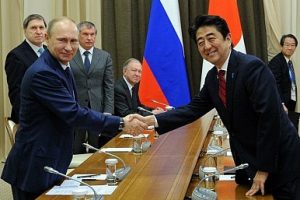 Then again this year, in September, at another Japan-Russia summit in Vladivostok, President Putin presented Prime Minister Abe with another katana. This time it was by the master smith, Muramasa. The sword had been taken to America after World War II by one of the soldiers of the Allied Occupation Forces. It is unclear how the sword made its way to Russia. According to government officials, the sword was returned as a sign of goodwill by the Russians.

The sword presented last year was made by swordsmith Takahashi Nobuhide, who was active between the late Edo period (1603-1868) and the early Showa era (1926-1989). The blade was one of the 12 made for the ascension of Emperor Hirohito in 1928. As the inscription on the blade states that he was 84 years old at the time of its manufacture, it is thought that Takahashi Nobuhide was born in 1844. 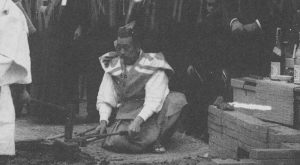 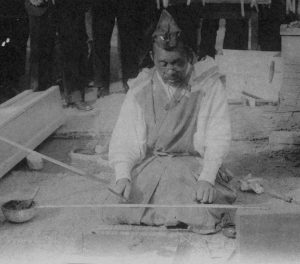 Nobuhide was the adopted son of Takahashi Naganobu, who was a swordsmith in the employ of the Matsue clan of Izumo (Unshu) province and a student of the Chounsai Tsunatoshi school. Naganobu also claimed to be the 17th-generation descendant of Fuyuhiro. Nobuhide went on to also study under the mastersmith Gassan Sadakazu (a smith of imperial appointment). Nobuhide sometimes added the art name Seiunshi to his works. He later became very well known in Osaka in his own right and was eventually honored to be officially appointed to produce a sword for the ascension ceremonies of the Emperor Hirohito in 1928.

The nakago (tang) is signed and dated on the tachi side (worn cutting edge facing downwards):

Inscription obverse: Tame Go Taiten Kinen (For the commemoration of the Imperial enthronement).

The tachi is shinogi-zukuri (with a ridgeline) in construction, and has a tightly forged ko-itame-hada (grain pattern in the steel) with mokume and ji-nie. It comes in a gold nashiji (pear skin texture) lacquered with gold maki-e pawlonia mon, efu-dachi (Imperial court guard) mounting.

The blade was recently displayed at the 2017 annual sword fair, the Dai Token Ichi (partially sponsored by Sankei Shinbun), in Onarimon, Tokyo, in November. 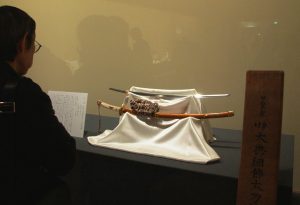 Paul Martin is a former British Museum curator, Japanese Sword Specialist and a secretary of the Nihonto Bunka Shinko Kyokai (NBSK). He is also an appointed Bunka Meister (Master of Culture: Japanese Swords) by the Japonisme Shinko Kai (Honganji).