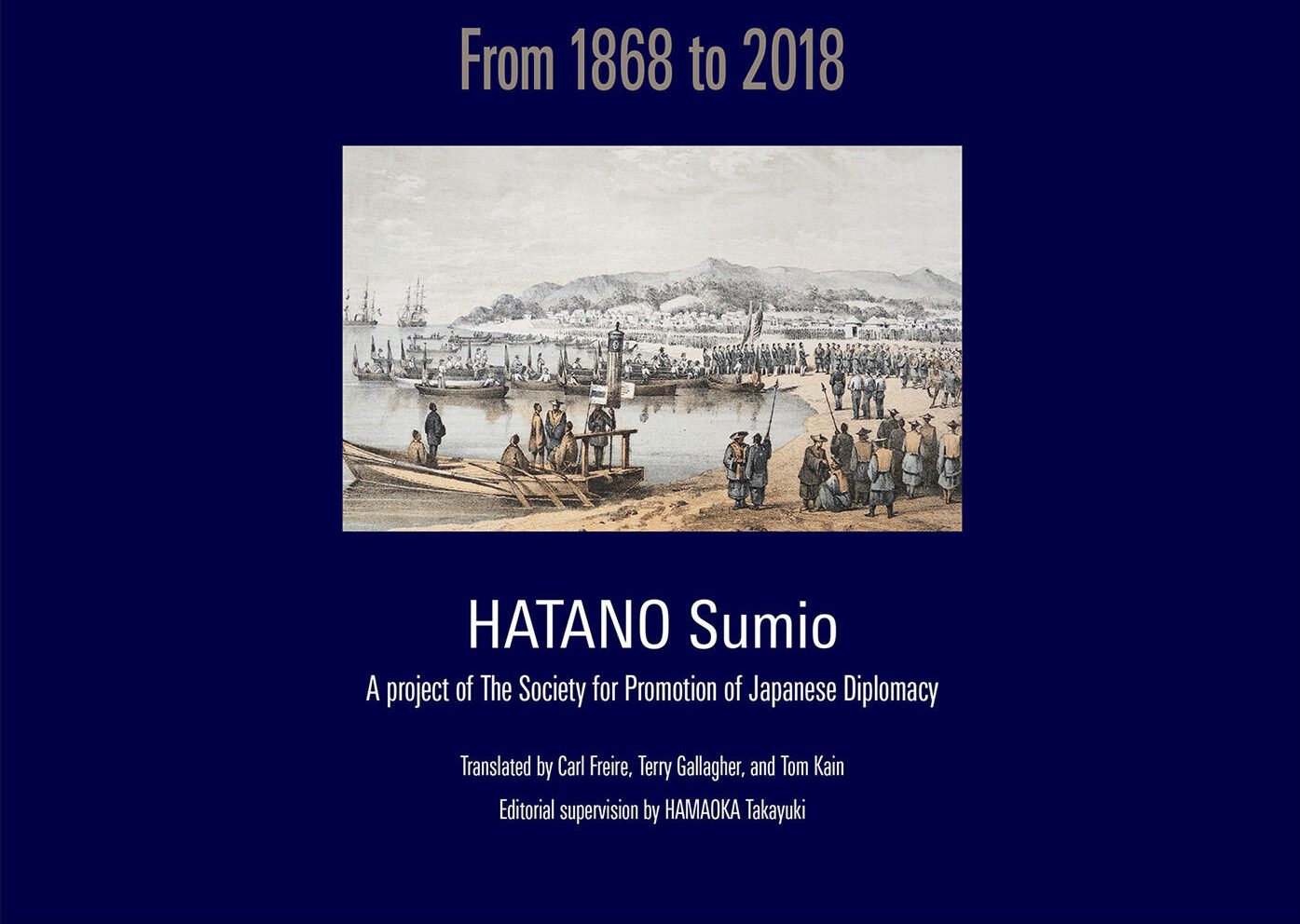 For those interested in Japan's diplomacy and the history of its interaction with the world, a massive new volume titled One Hundred Fifty Years of Japanese Foreign Relations: From 1868 to 2018 is out and available. It may be one of the best textbooks I have ever seen.

But it is more than a textbook. Based on primary documents and the academically rigorous secondary sources by leading domestic and international scholars, the 543-page survey will be a valuable companion to have for understanding Japan's foreign relations and the statesmen who helped lead the country.

Both Informative and Entertaining

Written by the distinguished diplomatic historian and professor emeritus of the University of Tsukuba Sumio Hatano and aided by the editorial supervision of Hamaoka Takayuki, the assistant director of the Diplomatic Archive of the Ministry of Foreign Affairs for Japan, this book will be valuable for both educators and students, as well as those with professional, cultural, and/or intellectual relationships with Japan.

The book, sponsored by the Society for the Promotion of Japanese Diplomacy, or Nihon Gaikō Kyōkai, was first published in 2019. The English translation was undertaken by Carl Freire, Terry Gallagher, and Tom Kain, and was published by the Japan Publishing Industry Foundation for Culture (JPIC), which has published more than 100 volumes to date. Having worked on many translations and editing projects myself, I can easily imagine the effort that went into this book.

One Hundred Fifty Years of Japanese Foreign Relations is immensely readable. Divided into 15 chapters of varying lengths, each chapter focuses on a particular chronological period and theme, with a helpful timeline to start off each chapter. In addition, each chapter has multiple photos of the places, personalities, and documents related to the period described, and "sidebars" to explain in more detail particular events and people.

For example, in Chapter 1, "Bakufu Diplomacy and the Opening of Japan," following a two-page timeline, are two sections: "The Difficulties of Opening Japan: Barriers to Free Trade" and "The Upsurge of the 'Expel the Barbarians' Movement: The Quest for National Unification," each with several sidebars of people and events.

Specifically, for the first section, these sidebars include important information on who shaped Bakufu diplomacy, early engagement with the United States, and the impact of natural events such as the Ansei-Tōkai Earthquake.

For the second section, the sidebars are extensive, perhaps worth a book on their own. They begin with the Tokugawa clan, and include people and events related to the opening of Japan and its markets, the Paris Exhibition. Bringing in the diversity of the era, some of the sidebars note the Posadnik (Tsushima) Incident and the Boshin War.

The Beginning of Modern Japan

The rest of the book is arranged as follows.

Chapter 2 is entitled "The Age of 'Elder Statesmen Diplomacy'." Section  1 is "Creating a New Government." It includes 9 sidebars about the people and incidents that helped define the era. In this volume, the sidebars are important to telling the story. Covering diplomats of Satsuma and (separately) of Chōshū, foreign employees in Meiji Japan, Japanese students abroad, lifting the ban on Christianity, and Chinese hegemony, the sidebars set the stage for the era.

The chapter continues in Section 2, "Adjusting Relations with Neighboring Countries: Responding to External Crises," with a sidebar on Takeaki Enomoto and Kiyotaka Kuroda.

Section 3 follows with a focus on "The Korean Peninsula and Japanese Diplomacy." The author develops the issue with sidebars on Yoshimoto Hanabusa, and Foreign-Settlement Trade and the Question of Opening Up the Interior.

The chapter ends with Section 4, "Putting the Finishing Touches on Independence." Sidebars are employed to cover historical incidents such as the María Luz and Ōtsu incidents, Rokumeikan Diplomacy, Foreign Minister Shūzō Aoki and the roles of Hirobumi Itō and Kaoru Inoue.

Rise of the Military

Chapter 3 addresses "The Mutsu and Komura Periods: The First Sino-Japanese War and the Russo-Japanese War." Here, the author introduces Mutsu diplomacy with sidebars influential figures such as Munemitsu Mutsu, Tokujiro Nishi and Ichiro Motono. This is followed in Section 2 with a more detailed look at diplomacy under Foreign Minister Jutaro Komura with China, Great Britain and the United States. Sidebars on imperial defense policy also help develop the story.

Section 3 looks at the era of diplomacy following the Russo-Japanese War, including the annexation of Korea, with sidebars on the Hague international peace conferences as well as individuals involved in open and secret diplomacy at the time. Section 4 takes a look at Japanese immigration to the United States and the Gentlemen's Agreement, with sidebars on prisoners of war and the Japanese Red Cross.

"Political Movements in China and Japanese Diplomacy," is the title of Chapter 4. It includes Section 1, The Yuan Shikai Regime and Japan, with sidebars on influential figures and a look at what were the Manchurian and Mongolian special interests? It leads to Section 2, "The Start of World War I and Japan's Participation" and Section 3, "The Russo-Japanese Alliance and the US Entry into the War."

For Chapter 5, "The 'New Diplomacy' and Japan," Section 1 covers The Paris Peace Conference and Its Legacy, and Section 2 addresses the League of Nations and Japan. both include sidebars filling in important historical facts behind the well-known events. Section 3 discusses international consortia and brings in the foreign travels of Crown Prince Hirohito.

Not forgotten are Far Eastern Russia and related events in Section 4, which includes the Siberian expedition and the tragedy of the Czechoslovak Legion, among others.

Thoroughly covered in Chapter 6 are "The Ups and Downs of International Cooperation." Focused on "The Era of 'Shidehara Diplomacy,'" cultural programs for China, the separation of Manchuria and Mongolia, and the second period of Shidehara diplomacy. These, too, are well-developed through specific sidebars on people and events that shaped policies of the time.

Second Sino-Japanese War and War with the US

Chapter 7 is titled "The Impact of the Manchurian Incident." It comprises three sections — (1) The Occupation of Manchuria, (2) The Inukai Cabinet, and (3) The Pluses and Minuses of Withdrawing from the League of Nations.

Four sections make up Chapter 8, "The Disruption of International Cooperation and Japan-China Cooperation." Together they tell the story of "The Era of Hirota Diplomacy" as well as the crisis in North China, including changes and setbacks in China policy.

"War with the United States Begins" is the name of Chapter 9. Beginning with the second Sino Japanese War, the reader is taken behind the scenes preceding World War II in the Pacific. Replete with numerous sidebars, the author pulls together a wide range of important incidents, events and historical figures in a discussion of global events influencing the start of war in the Pacific. Among them, the curious case of the "Draft Understanding" between Japan and the United States and the Tokyo Olympics that never were, help round the reader's understanding of how the war began.

Covering a portion of the Pacific War history better known by many, Chapter 10 is titled "The Pacific War and Wartime Diplomacy." It is one of several chapters with five sections. Beginning with Foreign Minister Shigenori Tōgō's foreign policy, it covers people and events influencing the Pacific war era, up to the demobilization and retreat of Japan.

The postwar era begins with Chapter 11, "The Era of Yoshida Diplomacy: The San Francisco Peace Treaty." It carries Japan's diplomatic history through the occupation, the war crimes trials and the Shigeru Yoshida cabinet, ending in 1954.

The story of postwar diplomacy continues in Chapter 12,  "'Autonomous Diplomacy' and Coordinating with the United States." Sidebars in its sections fill in important details of the policies and events surrounding the Ichiro Hatoyama cabinet. The chapter goes on to extensively cover work of the Kishi Cabinet and its "three principles of Asia Diplomacy." Relevant today, it also brings in the discussion of Japan's position on banning nuclear testing and the secret Japan-US agreement on prior consultation.

The postwar figures discussed in the sections and sidebars set the stage for the next chapter, Japan's growing prosperity.

Chapter 13, titled "Diplomacy during the Period of Rapid Economic Growth" looks in detail at Japan's diplomacy and policies under Hayato Ikeda and Eisaku Satō. But its sidebars, in addition to personal details on the important figures of the time, also addresses South Korea's "unlawful occupation" of Takeshima and the incorporation of the Senkaku Islands.

The second section, "The Agreement between Japan and the United States of America Concerning the Ryūkyū Islands and the Daitō Islands," includes diverse sidebars, including Japan's three non-nuclear principles, secret agreements on Okinawa, and the Japan-US textile trade conflict. The sidebars are critically important to understanding the story here.

Having become a "Great Economic Power," Chapter 14 addresses the liabilities of Japan's new status. From 1, "The Nixon Shocks and the Normalization of Japan-China Relations," to the Yasuhiro Nakasone and Noboru Takeshita cabinets, this chapter covers Japanese policymakers and diplomats seeking respect for Japan among the advanced nations. The sidebars look at the individual characters and some of the controversies that come up along the way.

Finally, Chapter 15, entitled "The Post–Cold War Era" has four sections. It looks at the changes brought to Japanese diplomacy with the end of the Cold War, including controversies with its neighbors on the Korean Peninsula and warmer reception in other parts of Asia, the continuing occupation of the Northern Territories by the Soviet Union's successor, Russia, and the central diplomatic tool of several of these decades: overseas development assistance (ODA). Sidebars examine each of the issues of their era in specifics, noting small changes and mistakes made along the way.

The chapter covers the second Shinzo Abe administration and the expansion of japan's diplomacy, ending with the "hope and insecurity" of the current era.

Following the main chapters can be found a bibliography of English language sources, a list of illustrations, an index by subject, and an index of names.

Edited in the aforementioned manner, the book brings to life Japan's diplomacy in a way that is easy to follow and understand. Overall, it argues that Japan's foreign policy has been based for the most part on "accommodation diplomacy" as it has dealt with the challenges and changes to the international environment during the past century and a half.

The author, Sumio Hatano, is the director-general of the Japan Center for Asian Historical Records (JACAR) at the National Archives of Japan. He also serves as head of the editorial committee for the Ministry of Foreign Affairs' Nihon Gaikō Bunsho (Documents on Japanese Foreign Policy).

Hatano earned his doctorate at Keio University, specializing in Japanese political and diplomatic history. He served as a research fellow at the National Institute for Defense Studies before joining the University of Tsukuba, where he held the posts of professor, vice president, and head of the library. He has published numerous books both as an author and an editor. His work, Taiheiyō Sensō to Ajia Gaikō is available in English as The Pacific War and Japan's Diplomacy in Asia (JPIC, 2021).

Like Hatano's previous scholarship, which includes both prewar and postwar studies, his new book is for the most part well-balanced between the prewar and postwar. This is important because the book argues that diplomacy in the postwar was an extension of Japan's prewar foreign policy. Namely, it has "emphasized cooperation and coordination with other nations while responding to changes in the international environment."

The world is getting even more complex. Readers will want to turn to this book to discover hints about how Japan will be responding in the future to the changes internationally.