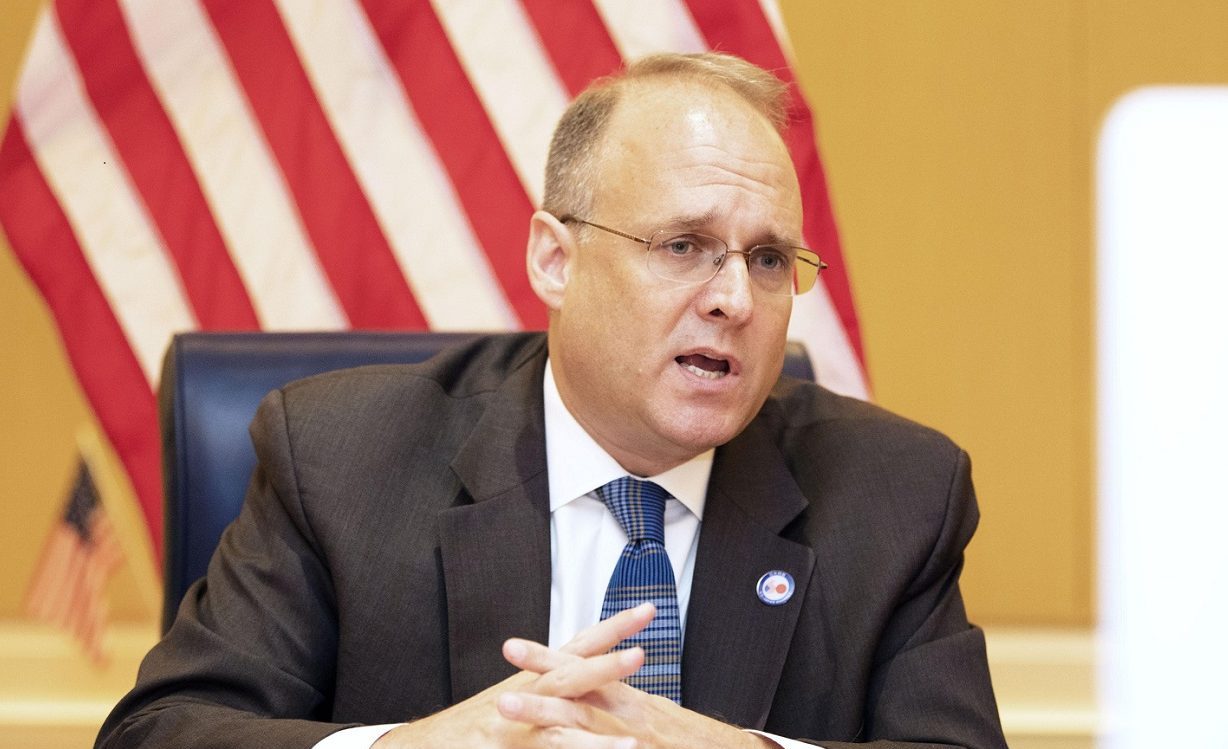 China is in an “arms race” and has deployed a large number of ballistic and cruise missiles, the U.S. Special Presidential Envoy for Arms Control Marshall Billingslea told the Japanese media in an online meeting on September 29. Billingslea, who is in charge of arms control for the Trump administration, strongly criticized the Communist Party administration in Beijing for not responding to the United States’ call for arms control talks.

In the question-answer session with Japanese media, Billingslea cited concrete examples of China’s arms development and provocations, including its establishment of military bases on rocks in the South China Sea and aggression around the Senkaku Islands (Ishigaki, Okinawa Prefecture, Japan).

Ambassador Billingslea’s trip to Japan in late September was for the purpose of bilateral coordination with the new Suga government, he told the group, “To discuss the very worrisome trends we now face with regard to the Chinese Communist Party and Chairman Xi’s alarming buildup of Chinese military capabilities.”

Countering allegations from some quarters that the United States was prompting China’ into an arms race by its presence in Asia, Billingslea said:

This idea of triggering an arms race in Asia through some kind of a U.S. deployment of a capability, I think, is absolutely false. First of all, China is already arms racing. We need to be very clear.

There are more than 13 different kinds of Chinese short, medium, and intermediate range ballistic missiles and cruise missiles that the Chinese have deployed. The United States has deployed zero. […] China has deployed more than 1,000 – maybe as many as 2,000 – of these kinds of missiles.

In the question-answer session with Japanese media, Billingslea used the numbers to describe the threat perception:

Let me give you an example. Last year the Chinese People’s Liberation Army shot 225 ballistic missiles. That is enormous if you compare with any other country: maybe five or ten [times more]. And far more than the entire rest of the world combined.

The arms control ambassador pointed to China’s disregard for its international obligations and agreements, such as in Hong Kong and China’s own minority regions, while expressing concern for China’s growing nuclear arsenal. At the same time, he cited concrete examples of China’s arms development and provocations, including its establishment of military bases on rocks in the South China Sea and aggression around the Senkaku Islands (Ishigaki, Okinawa Prefecture, Japan).

The violence – the shootings and the attacks – on the Indians on the border with India. The harassment of South Korea in South Korea’s DMZ. In the South China Sea with the clearly illegal construction of those islands and with the militarization of those islands – after Chairman Xi promised at the White House that he wouldn’t do this. This is a regime that feels very free to engage in intimidation and coercion and blackmail.

And our great concern is that this is a regime that now wants to become a nuclear-armed bully with a large number of nuclear weapons. And this should be alarming for the entire Asia-Pacific region.

The U.S. is anxious, he added, to achieve a strategic arms reduction agreement that includes China as a step toward global stability. 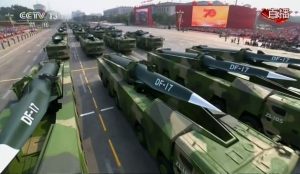 He condemned China’s unwillingness to participate in talks using the excuse of the COVID-19 pandemic, noting:

So far they have refused to sit down in person to have this discussion. I find it very ironic that the regime which gave the world the Corona virus – the COVID virus – is now using the Corona virus – the COVID virus – as an excuse to not meet in person. That is clearly ridiculous. We are here, in Japan, under the most safe and tested of circumstances.[…] They simply are dodging their obligations under the nuclear non-proliferation treaty.

Getting to Arms Control

Japan, he said, should want arms reduction in its region as well, and he made it clear that one purpose of his trip was to urge the new Japanese government to encourage China to respond to the call for arms control talks. China’s foreign minister, Wang Yi, is due in Tokyo for his first talks with the new Suga government in late October.

The U.S.-Russia New Strategic Arms Reduction Treaty (New START), which will expire in February next year, can be extended if the Russian side accepts the U.S. conditions, in particular limiting all nuclear forces, including those of China. The U.S. envoy elaborated:

We are also going to update our ally [Japan] on the state of play with regard to the Russian Federation; and Russia’s buildup of nuclear weapons; and our effort to negotiate a new approach to nuclear weapons’ arms control with both Russia and, ultimately, to include China.

To illustrate the growing arms gap, he pointed out:

[T]he reason that we feel so strongly about this is because of the [current] New Start treaty: it covers over 90% of all U.S. nuclear weapons. It only covers 40 or 45% of the Russian nuclear weapons. And it covers 0% of China’s. And so, we need to restructure our approach to take into account what China is doing and frankly what Russia is doing. 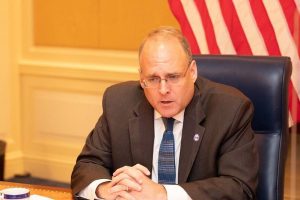 Billingslea emphasized the need for Japan’s cooperation and discussed how the U.S. would like to see the bilateral alliance develop under the new Prime Minister Yoshihide Suga.

First, he noted his trip and the arms issues come at the time of the 60th anniversary of the Japan-U.S. alliance. Looking forward, he reflected, “I believe that we would see continuity in the close relationship […] In particular, we should look to ways to strengthen in anticipation of growing Chinese aggression.”

The U.S. wants to work with the new Suga government to strengthen defense and deterrence. At the same time, he said, “we also will be talking about how to use diplomacy. How to build a coalition of democratic nations and like-minded nations together to counter what the Chinese Communist Party is trying to do.”

Expanding on this point, he left the media to consider the challenges ahead, saying:

Our preference is diplomacy. Our preference is arms control. To that end we are looking to the government of Japan to publically push the Chinese to negotiate. […] And I think it is important to continue to reaffirm and remind China of its NPT obligations.

Ambassador Billingslea was appointed U.S. Special Presidential Envoy for Arms Control in April 2020. Prior to the appointment, he served in the U.S. administration as Assistant Secretary for Terrorist Financing at the Department of the Treasury, and as president of the 37-country Financial Action Task Force (FATF), a global anti-money laundering and counter-terrorist financing body. Previously, he served in the Pentagon as Deputy Under Secretary of the Navy, among several other positions.

Billingslea has worked with the Japanese government in a number of different roles, most recently with Japan’s Finance Ministry while he was in the U.S. Treasury Department. Before that, while he was in the Defense Department he worked with Japan’s Maritime Self-Defense Force during the George W. Bush administration. He notes that he had the privilege of studying in Chiba, Japan, as a young high school student.

(Find a related story by the author here, in Japanese.)