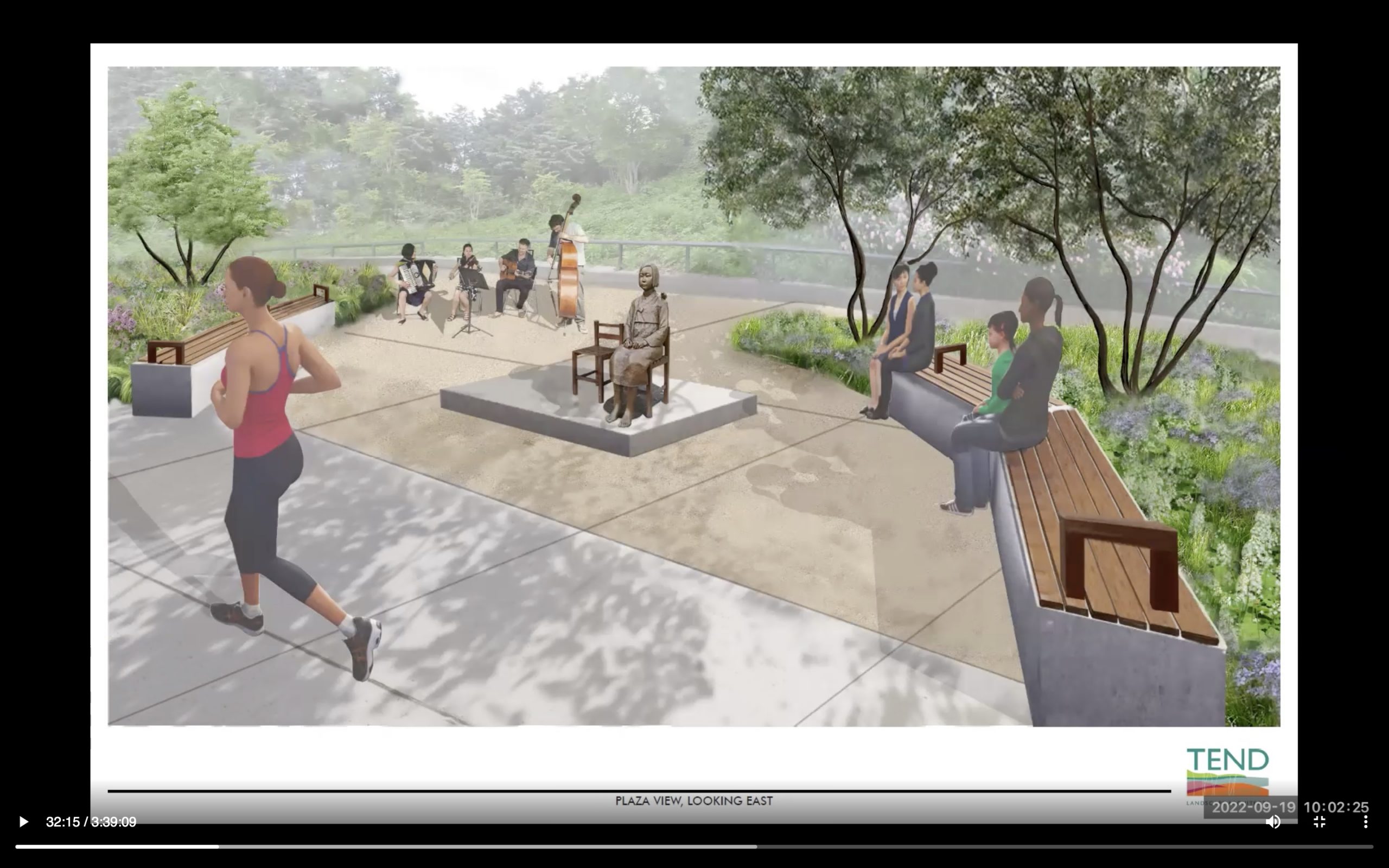 The Philadelphia Art Commission held a public hearing on September 19 to consider the establishment of a Philadelphia Peace Plaza, which comprises a project to erect a “Statue of Peace.” a controversial monument commemorating the alleged comfort women victims under Japanese Imperial rule.

Endorsed by the Philadelphia Office of Arts, Culture, and Creative Economy, the plan was initially submitted to the city's Art Commission by Shinjoo Cho, chair of the Philadelphia Peace Plaza Committee (PPPC), in February 2021. The advocates aspire to fund the fabrication of the memorial via grassroots donations and, upon completion, bestow it to the city for installation at a designated site in Queen Village.

The proposal immediately provoked vigorous opposition from residents and civic groups, fearing potential ethnic quarrels and targeted discrimination against the Japanese and Japanese Americans in their neighborhoods.

Proponents contend there's no empirical evidence indicating a discernible rise in hate crime and harassment against the Asian community or any major public disorder caused by the said monument elsewhere.

At the public hearing, Cho stressed the importance of joining the global movement in memorializing the "perils of women during armed conflict" and not being swayed by the "false controversy" manufactured by the objectors. Cho claimed the opposition groups employed diverse tactics, including fearmongering, to stir public opinion against constructing the shared space.

She argued that the PPPC is motivated to “encourage dialogue that can help resolve existing division and distrust that have long festered.” And through the Statue of Peace, she hopes to "teach the history of sexual violence and forge harmony among Asian and other ethnic groups."

"We can point to so many points in history where communities and nations became truly healed, unified, and stronger by confronting the past," she said.

Mazurek argued that the monument does not symbolize peace and human rights but is "designed to stoke anti-Japan sentiment and contempt toward Japan and the Japanese people." Mazurek indicated that at least seven major cities in the United States rejected similar plans due in part to its divisiveness.

"This artwork is not simply public artwork that will bring about a healthy discussion of different political positions. Instead, it singles out a particular ethnic group... Erecting this statue in a public space strongly implies that the city indeed takes the side of the Korean group," he said.

Most pertinently, the general requirement of the policy are:

Mazurek believes that neither prerequisite has been fulfilled.

Pre-registered and unregistered participants were each granted a 2-minute opportunity to address the subject. Most attendees were at odds with the project for various reasons ranging from a public disturbance and business interests to concerns over conceivable animosity between the nations involved.

South Korean scholar Dr Lee Wooyoun of Nakseongdae Economic Research Institute joined the dissenting crowd to rebuke what he argued advocates' erroneous historical assertions on the comfort women issue. He claimed there is no documented evidence to prove comfort women were in their early teens or were dragooned by the Japanese Military into sexual slavery.

"These women were sex workers in their mid-20s, paid fair wages, and returned to Korea according to the contract," said Lee.

While Cho responded to many objections raised by the audience, she abstained from commenting when the historical evidence of "sex slave theory" was called into question by Lee and a few others.

Lee further cautioned the municipality not to overstep its jurisdiction to intervene in diplomatic disputes between third-party states.

"I ask that US citizens not engage in historical conflicts between Koreans, and between Korea and Japan. The statues have nothing to do with peace, and erecting them makes the problem (between Seoul and Tokyo) worse and worse," he added.

Few Endorsers of the Project

Lee, who sat through a nearly four-hour meeting, was astonished by the noticeably small group of “statue endorsers” at the conference. But for all that, some recognizable names, such as filmmaker Miki Dezaki and Korea Verband, a civic group in Berlin responsible for erecting their own Statue of Peace, showed their unwavering support. Jung-Hwa Han, president of Korea Verband, had also enlisted to speak, but left to attend another meeting.

At the hearing, Dezaki argued that "attempting to construct a universal monument on sexual violence and avoid mentioning Japan and the comfort women system is whitewashing history."

"It's like proposing a monument on victims of Pearl Harbor to not mention the actual victims and the perpetrating country, and just saying generically that killing is bad," he said.

Dezaki also set aside time to establish his academic credentials and introduce his principal work, Shunsenjo, an provocative documentary exploring the dichotomy of comfort women history through personal interviews.

Several scholars and activists he interviewed filed a lawsuit in 2019, accusing him of ethical violation and unfairly exploiting the conversation to suit the film's narrative.  The plaintiffs likewise requested the court to suspend the public showing of the film.

Notwithstanding his self-professed bona fides, however, he refrained from debating the academic aspect of the comfort women discourse.

Can a Statue Truly Heal the Divide?

While the PPPC cites US Justice Department records to demonstrate a poor correlation between the statue and hostility vis-à-vis specific ethnic communities, many locals feel otherwise. They've witnessed firsthand the bullying and verbal abuse their family, friends, and neighbors endured as a result of the monument.

These victims likely wish their voices were thoroughly examined and reflected in the decision-making process, just as the testimonies of former comfort women.

In a phone interview with JAPAN Forward, board members of the Japan America Society of Greater Philadelphia said:

We think the PPPC takes quite a contradictory position. Even misleading to some degree. Suppose the Peace Plaza, as they submit, serves to condemn ubiquitous wartime atrocities against women and memorialize all such victims regardless of time, place, and nationality. Then, the inscription need not include the noun “Japanese Military.” Nor shall the sculpture be attired in a traditional Korean garment, ”Hanbok.”

Those members feel genuinely anxious that the motion, if approved, could irreparably harm the group’s healthy bilateral relations with the Korean community.

The commissioners are indeed confronting a challenging circumstance, particularly since Philadelphians are just now recuperating from a recent friction and courtroom battle over another controversial monument in Marconi Plaza. Nevertheless, the ball is firmly in the Art Commission's court.

The city's nine-member commission, which unanimously  approved the proposal conceptually in 2021, will make its final decision on October 12. No public hearing is scheduled for that day.

Find more of Kenji Yoshida’s reports on Korea-Japan relations at this link.