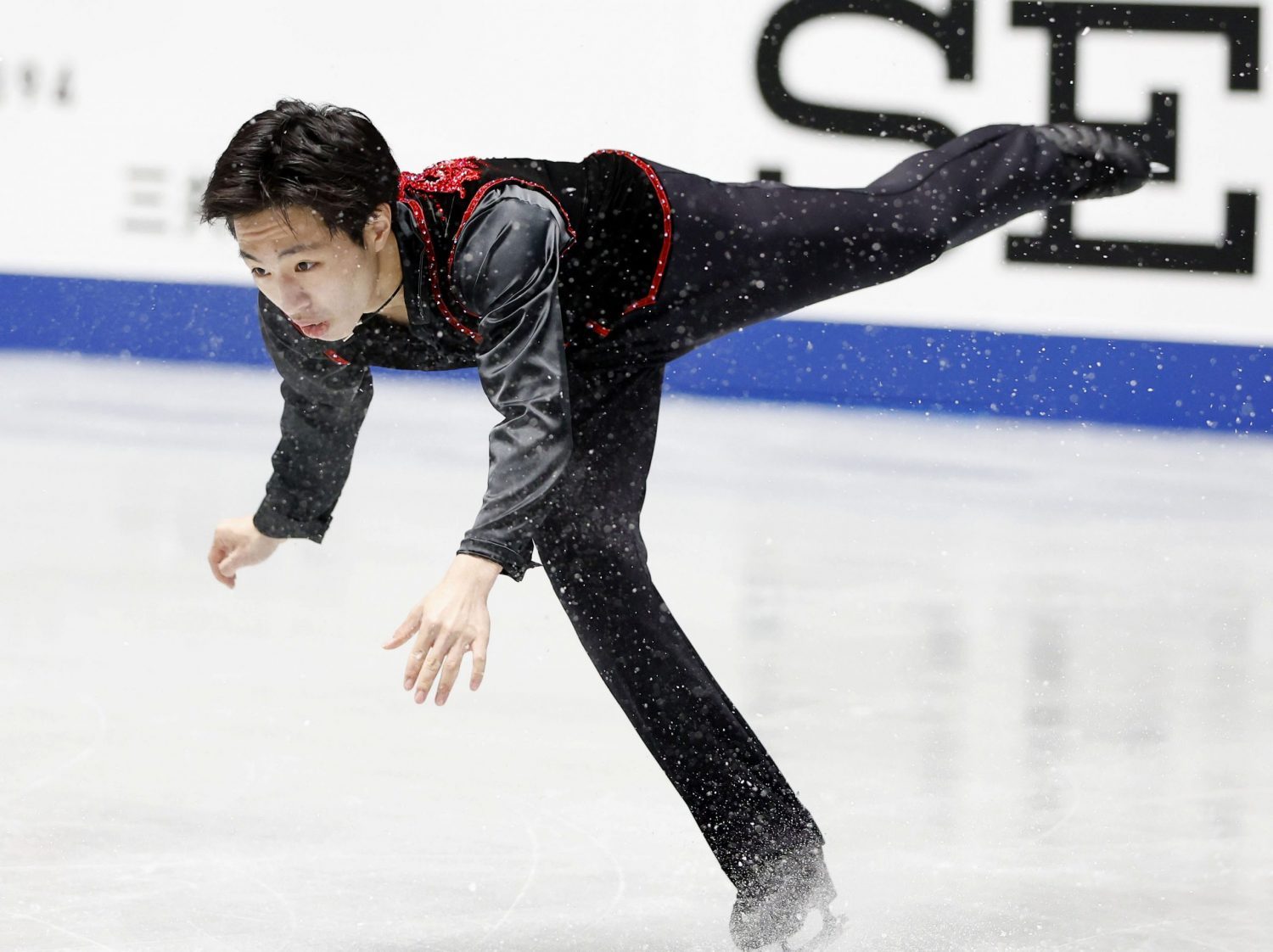 Kao Miura, seen competing in the NHK Trophy men's free skate on November 13, is targeting a national title at the Japan Junior Championships in Nagoya.

NAGOYA ー Kao Miura, the 16-year-old quad jumping sensation, will be favored to win the men’s title at the Japan Junior Championships here this weekend. Miura finished a respectable eighth at last week’s NHK Trophy as the youngest skater in the field of 11.

The men’s and women’s short program will get underway on Saturday afternoon, November 20 at Nippon Gaishi Hall and continue with the free skates on Sunday.

Miura was second at this competition last year in Hachinohe, Aomori Prefecture, behind Lucas Tsuyoshi Honda. When asked about this year’s Japan Junior Championships at the NHK Trophy, Miura made it clear he was looking to do something special this weekend.

“I want to have better scores, and be overwhelmingly strong,” Miura stated. “Maybe become a legend in the junior circuit.”

Miura was called on to compete in the NHK Trophy to fill the spot left open by two-time Olympic champion Yuzuru Hanyu, who had to withdraw due to an ankle injury.

Miura’s repertoire of jumps features a strong quad toe loop and quad salchow. He talked about how he came to have the ability to land them consistently as a junior.

“When I was learning from [Shoichiro] Tsuzuki-sensei (Hanyu’s first coach), he told me, ‘Don’t be afraid. Use the speed to pick up the attempts to jump.’ He said if I continue to work on the speed, I would have good coverage with my jumps and height as well,” Miura said.

Miura, a Tokyo native, said he feels good about how far he has progressed with his jumps to this point.

“So now I am proud and confident that it has come to that level that Tsuzuki-sensei instructed me to aim for,” Miura commented. “I am really happy that I have come that far.”

Miura, whose free skate this season is to a selection of songs by Vicente Amigo, analyzed what he needs to improve on going forward after his performance at the NHK Trophy.

“I had a quad in the second half, and my legs were getting really tired,” Miura remarked. “I could sense that I couldn’t move in the way that I wanted. That’s the issue I need to work on.

“I don’t know if it was a stamina issue,” Miura continued. “It was hard breathing. But more than that my legs become tired and I need to improve that somehow.”

Miura believes he must pick up the pace as his program proceeds.

“I have to work on the details of my program,” Miura said. “The second half is going to be a major challenge for me. The spins need a lot of work. If I can work on these three things, my scores will improve.”

Miura’s prime competition will likely come from 2018 junior champion Tatsuya Tsuboi, who is enjoying a renaissance this season, as well as Shunsuke Nakamura and Kosho Oshima.

The women’s field is packed with contenders for the title this year.

Hana Yoshida, who features a triple axel, placed second last year behind Rino Matsuike. Yoshida, who is coached by Mie Hamada, is back for another shot at the title.

Yoshida’s prime competition will likely come from young phenom Mao Shimada, Japan’s Novice A champion the past two seasons. Shimada, who is also coached by Hamada, was third last year behind Yoshida at the tender age of 12.

Shimada, who turned 13 last month, is clearly gifted beyond her years. She blew away the field at last month’s Novice A Championships in Shiga Prefecture, defending her crown with a victory margin of more than 20 points while landing a quad toe loop and six triples.

Shimada, who turned 13 last month, is clearly gifted beyond her years. She blew away the field at last month’s Novice A Championships in Shiga Prefecture, defending her crown with a victory margin of more than 20 points while landing a quad toe loop and six triples.

Other potential medalists include Rion Sumiyoshi, who has been selected to skate in next month’s Junior Grand Prix Final in Osaka, Ayumi Shibayama and Sakurako Daimon.

The top six finishers in the men’s and women’s competitions will be invited to participate in next month’s Japan Championships in Saitama, provided they are juniors. Shimada is still a novice, so even with a victory here, she won’t be eligible to skate against the seniors.