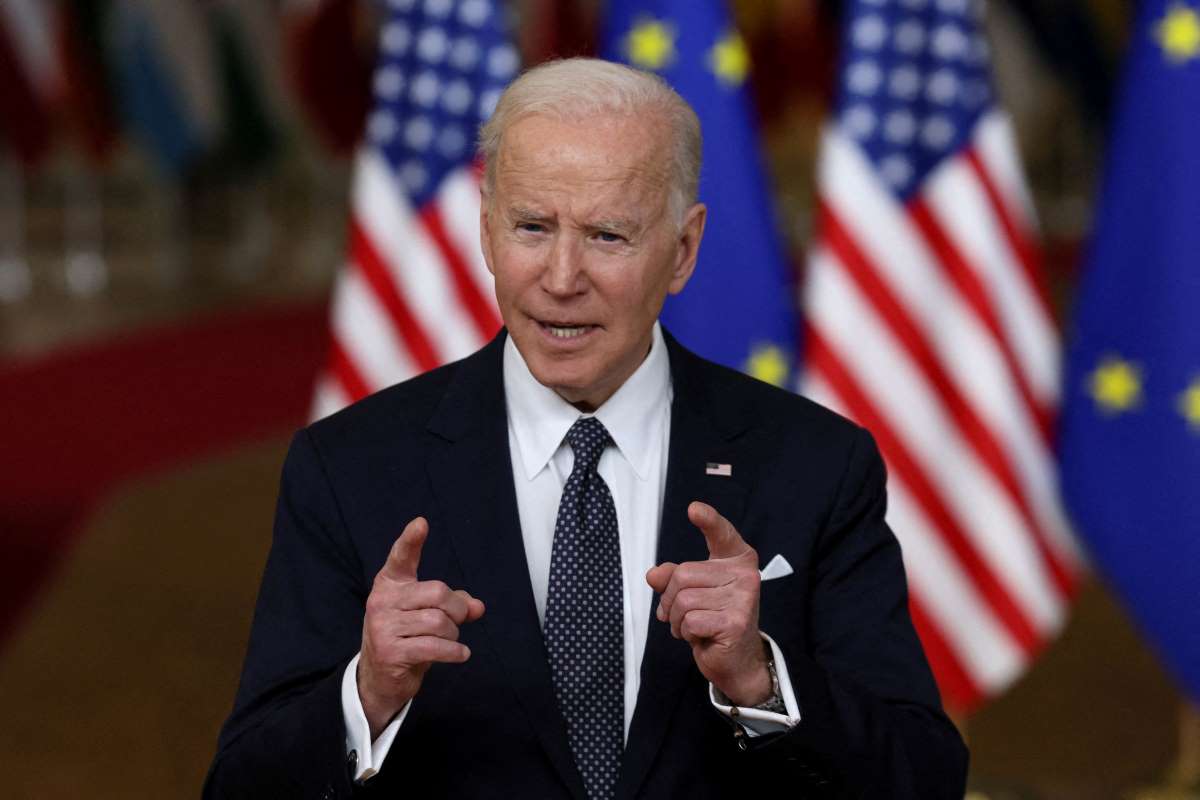 U.S. President Joe Biden speaks to the media in the framework of a European Union leaders summit amid Russia's invasion of Ukraine, in Brussels, Belgium March 24, 2022. REUTERS/Evelyn Hockstein

Part 1: INTERVIEW | US and Japan: Bringing the Transatlantic and Indo-Pacific Together

The leaders of the United States, Japan, India and Australia ー the Quad ー will meet in Tokyo on May 24.

For the occasion, The Sankei Shimbun and JAPAN Forward sat down with US Ambassador to Japan Rahm Emanuel to discuss the state of the US-Japan relationship.

In this installment, Ambassador Emanuel discusses the Indo Pacific Economic Framework. He talks about its aims and differences compared to the Trans-Pacific Partnership, from which the US withdrew during the Donald Trump administration. Among the points made about the impact the IPEF would have in Asia, he makes the case for a rules-based order, especially vis–a-vis China.

On a more lighthearted note, Emanuel also talks about his own  style as an ambassador, and his wish while serving in Tokyo to “live as a resident in Japan.”

Presented in two parts, excerpts of the interview follow.


What is the US aiming for with the Indo Pacific Economic framework (IPEF)?

America is a permanent Pacific power. China's entire effort is to basically say, we're going to kick the Americans out of here. [But] when you look at our military alliances and resources, we're here to stay. Look at AUKUS. You can bet long on the United States.

IPEF is an economic diplomacy that reinforces that basic point. Both for countries like Japan and Australia, but also for Vietnam, Thailand, Indonesia. There are different components of it.

One of the things that I think is very important is that the last thirty years of economic engagement has been defined by both low cost and efficiency. Going forward after COVID, after Russia, Ukraine, after some of the political disruption in mature democracies ー sustainability and stability are going to be the North Stars, not just cost and efficiency. IPEF is about reinforcing stability and sustainability.


How does this relate to the Quad?

The Quad is also an alliance of like-minded countries that see our North Star as a free and open Indo-Pacific, where coercion, whether that's economic or military, does not become the norm. But a rules-based system that respects the sovereignty of other countries and their economic and political independence does.


Is IPEF a substitution for TPP? And if so, why doesn’t the United States just join TPP?

The United States position is that we pulled out [of the TPP].

There's some value there. [But] I do think we should be cognizant of one thing: the TPP was negotiated at a different time. We have to take stock that things have changed economically. And more importantly, if I'm right about sustainability and stability, things have changed post COVID and post Russia politically.

I have talked to many CEOs of different companies here in Japan and the United States. They [CEOs] are not going to make decisions anymore just purely on costs and efficiency, or invest in a country that can be sanctioned because of its political and economic actions.

From now on, the stability, the sustainability of that political system, [the fact] of abiding by a set of rules, are going to be overriding in value [compared to] just five years ago.

IPEF is an acknowledgment that we're in a different world at a different time, it takes stock that we are in a brave new world, for lack of another way to say it.

The President's been clear about the opportunities that the Indo-Pacific economic framework offers.

Supply chain: There were many resources in the early days of COVID that China said, “we're not letting out.” That's not a sustainable or resilient or stable way to operate.

Japan was the first target of this, when China said “you're not getting certain rare earth materials.”

[IPEF] does accept that economic diplomacy is a key component of the overall strategic goal. America is a permanent Pacific power, and countries in this region can rely on America to be a continued presence both for security reasons and economic engagement reasons.

Do you think that China will join the IPEF?

They play by China rules. That's very different from playing by accepted rules that all of us agree on. That is the experience of the World Trade Organization.

There's nothing in the last 25 years, be it intellectual property, patents, that tells you China will abide by those sets of rules by which everybody else [lives].

The basic framework of IPEF is that there are rules, regardless of size of economy, strength of economy, that we agree to. And we'll all be held accountable to abide by them. There is nothing that tells you that China will do that.

In the four months since you’ve been in Japan, you've been very active. What do you keep in mind as you represent the United States with the Japanese people?

You have to work many layers: meet with government officials, business leaders, media people, engage the Japanese people.

When I was mayor [of Chicago], I took the train three times a week to work. Japan has a world class infrastructure system.

My view is the ambassador also has to meet the Japanese people where they live their lives. I don't want to be an ambassador that is driven or secured or saved. I want to be out and about and experience an incredibly rich culture and deep society.

When I was in Kobe, I was walking around, and this woman recognized me from the night before on the news. She invited me in, and they were making tofu, and the top part of the tofu, yuba. It was a family owned business, and they gave free tastings.

One of the responsibilities of a US ambassador, given the history of the United States and Japan, is to engage the Japanese people. Whether that's fly fishing, taking a train, walking a market and going to a restaurant.

Five years ago, an ambassador wouldn't engage on social media. Today, you have a new component.

What is the essence of the US-Japan relationship in your view?

I also want to say this. The United States and Japan are not just treaty allies, we are friends.

One thing that touched me when I was down in Okinawa and had that lunch, dinner with the kids. These are 16 kids from Okinawa who are all going to go study in the United States. You hear in their voice this enthusiasm. You look in their eyes and see a sense of possibility.

That's not a treaty. That's not Alliance. That's what friends experience about each other. And their enthusiasm about going to live overseas for a year in America is the same enthusiasm I want to bring to living here in Japan.

I am living here in Japan, I'm not just the ambassador in Japan. I want to experience Japan as a resident of Japan, and I'm hoping I do it [although I know] I'll have good days and bad days.

(Click here and here for related articles in Japanese)