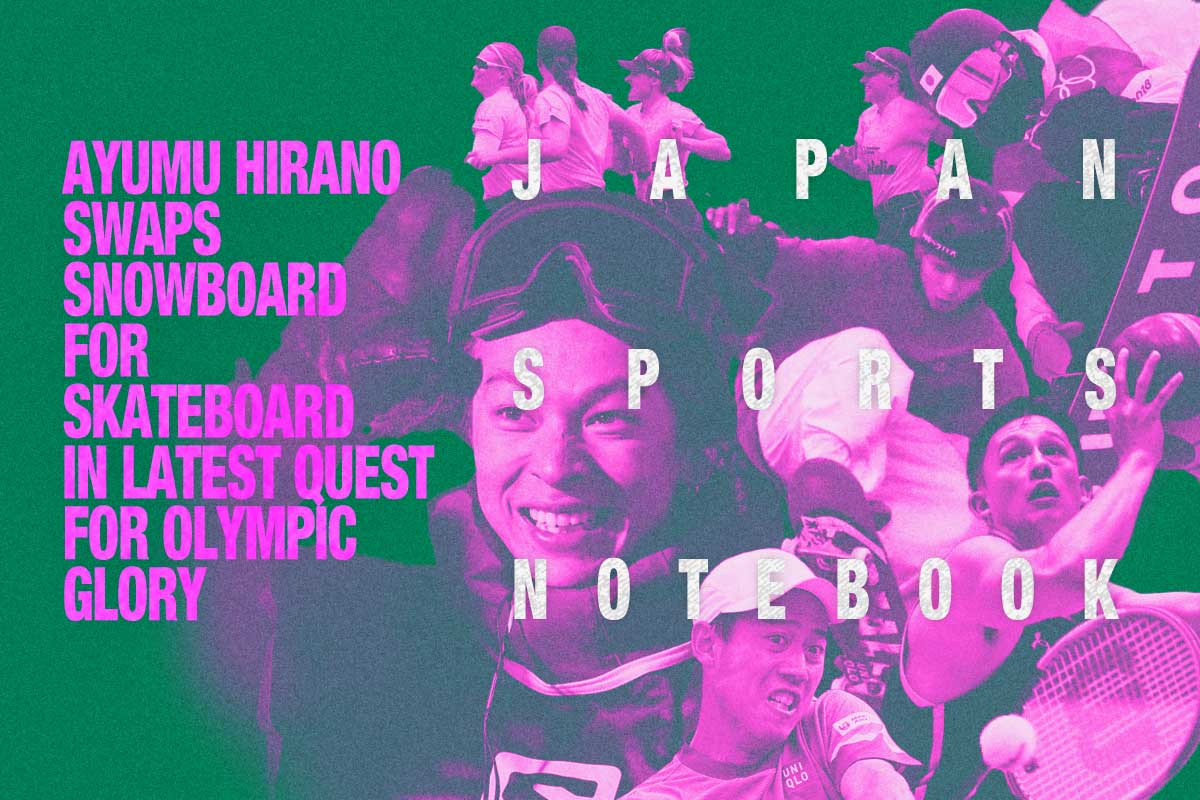 Like surfing, sport climbing and karate, skateboarding will make its Olympic debut at the Tokyo Games.

As the International Olympic Committee aims to make the global extravaganza more appealing to a younger audience, the four sports were chosen for inclusion four years ago.

The 22-year-old Niigata Prefecture native began snowboarding at age 4. He earned the silver medal in the men’s halfpipe at the 2014 Sochi Olympics, becoming the youngest Olympic snowboard medalist (15 years and 74 days ). Four years later, he did it again at the Pyeongchang Games.

Before that, he was the 2012-13 World Snowboard Tour halfpipe champion.

In the Winter X Games, another testing ground for snowboarders, Hirano was the 2016 superpipe winner in Oslo and the 2018 event champ in Aspen, Colorado.

With a love of competition in both snowboarding and skateboarding, Hirano took an important step in measuring his skills in the latter event at the 2019 World Skateboarding Championships, where he placed 17th.

“The higher he goes, the better he feels,” the elder Hirano was quoted as saying in a story posted on the World Snowboarding website. “And he wants to go bigger than anyone. Even Shaun White.”

White, one of his top Olympic rivals for years, claimed his third halfpipe gold in 2018 and had pursued skateboarding in making a run at a spot on the U.S. team for Tokyo. But last year he scrapped those plans to focus on getting prepared for the 2022 Beijing Winter Olympics. The 34-year-old White may be nearing the end of his long career.

Hirano looks eager to keep chasing titles in both sports.

And he appears poised to become Japan’s second-ever athlete to appear in the Winter Games and Summer Games since current Tokyo 2020 President Seiko Hashimoto. (As a speedskater, Hashimoto represented Japan on the Olympic ice in 1984, 1988, 1992 and ’94. Competing as a cycling sprinter, she participated in the 1988, 1992 and ’96 Summer Olympics.)

In May 2019, Hirano’s triumph at the skateboard national championships at Murakami City Skate Park demonstrated his skill set as a skateboarder, which included dethroning reigning champion Kensuke Sasaoka.

“I feel like I have taken another step toward the Olympics,” Hirano said afterward, according to Kyodo News.

Zoom ahead to this spring, and Hirano has been preparing for the Tokyo Games by competing on the Dew Tour. On May 21, he finished 26th in the men’s park skateboard event in Des Moines, Iowa. Hirano had the best finish among Japanese men, with Yuro Nagahara (30th) and Sasaoka (49th) finishing below him in the standings.

While the Olympic men’s and women’s park and street skateboard events are all limited to 20 competitors based on world rankings, Japan is allocated one spot in all of them.

Hirano, who is Japan’s highest-ranked male skateboarder, has punched his ticket to the Tokyo Games, and at the crowded Aomi Urban Sports Venue, you’ll see his skateboard.

And look for his snowboard in cooler climes again in the future.

Surprising nobody, Kawasaki Frontale are still the top of class of the J. League.

After winning the league title a year ago, featuring a 13-match unbeaten streak, manager Toru Oniki’s club is on a remarkable run to open the 2021 campaign.

A 2-0 victory over Yokohama FC on Wednesday, June 2 extended Frontale’s unbeaten run to 21 games to begin the season ー 17 wins and four draws.

Yu Kobayashi ensured Frontale’s latest victory with a pair of goals, scoring in the 39th and 67th minutes against their Kanagawa Prefecture rival.

Barring an unforeseen collapse of epic proportions, Oniki’s men will claim their fourth title in five seasons before the year’s end, adding to their championship hardware from 2017, 2018 and last year.

After the match, Oniki was asked if he has any lofty goals for his team in 2021, such as going undefeated for the entire season. He responded by telling reporters, “If possible, I would like to say that, but in reality, I think we can only produce results one by one.”

Shohei Ohtani, who fanned 10 batters and collected his second win in his latest start on Friday, June 4, is listed as a designated hitter on the MLB All-Star ballot.

Ohtani pitched six innings in the Los Angeles Angels’ 3-2 win over the Seattle Mariners. He allowed four hits and two runs and didn’t walk a batter. He was 0-for-2, batting in the No. 2 spot.

Through June 4, Ohtani and Boston Red Sox third baseman Rafael Devers are tied for third in the majors in home runs (15).

In other MLB news, San Diego Padres hurler Yu Darvish notched his 170th career victory in a 4-3 triumph over the New York Mets on Thursday, June 3.

Darvish improved to 6-1 this season, allowing two runs in 5 1/3 innings. He has 77 MLB victories and had nearly a hundred more with NPB’s Hokkaido Nippon Ham Fighters before moving to the big leagues.

The Philadelphia 76 eliminated the Washington Wizards from the NBA playoffs with a 129-112 victory in Game 5 of their first-round series on Wednesday, June 2. Rui Hachimura had 21 points on 8-for-13 shooting in the loss.

Hachimura averaged 14.8 points and 7.2 rebounds against the Sixers in his first career postseason series. He shot 61.7% from the field in the five games. He averaged 34.6 minutes, an increase of three minutes per game from the regular season.

In the Wizards’ lone victory ー a 122-114 verdict in Game 4 ー the former Gonzaga University star finished with a double-double (20 points and 13 rebounds).

For Hachimura, his first NBA playoff experience was another important part of his basketball education.

“The fact that I got that much court time in the playoffs means the team trusts me, and I feel like I delivered results,” Hachimura told reporters during an online video interview on Thursday, June 3.

“It was a great experience for me. It was a big step in my basketball career.”

Looking ahead, Washington floor leader Russell Westbrook acknowledged that Hachimura is a key part of the team’s foundation.

“Rui has so many different tools,” Westbrook told NBC Sports Washington. “He’s so good, so talented. My challenge to him is to be able to do it every night. I think that’s the most important thing to do in this league, that’s my challenge for him. When he’s able to do it at a level, we’re a much better team, we’re a better team when he’s playing his best and leaving it out on the floor.”

After a 40-16 regular season and a trip to the B. League playoff semifinals, the Golden Kings are now preparing to begin anew under new leadership.

Fujita’s departure was announced on Wednesday, June 2, a day after the Chiba Jets defeated the Utsunomiya Brex in Game 3 of the B. League Finals to capture the title for the first time.

The 35-year-old Fujita took over as Golden Kings bench boss after his predecessor, Norio Sassa resigned in December 2019. Fujita, who joined the organization as an assistant coach before the 2019-20 season, then led Ryukyu to a 14-7 record for the remainder of the pandemic-shorted season.

“It is very disappointing to leave without achieving the club’s wonderful goal of winning the championship next season and ‘energizing Okinawa,'” Fujita said. “However, I think it was because of everyone’s support that I was able to fight to the end… Although it was a short period of two seasons, the time at Ryukyu Golden Kings became a very important part of my life.”

Utsunomiya Brex guard Kai Toews was named the B. League Rookie of the Year on Thursday, June 3.

In a video message, teammates Ryan Rossiter and Jeff Gibbs and others recorded congratulatory messages to Toews.

“Kai, congratulations,” Gibbs said. “A well-deserved honor. Like Ryan said, the sky’s the limit for you.”

On Friday, June 4, the second and final day of the B. League Awards program, the Best Five Team and MVP, among other awards, were announced.

In the backcourt, the Jets’ Yuki Togashi and Kawasaki Brave Thunders standout Yuma Fujii were named to the all-league team.

Nishikori is 26-7 in his career in five-set matches.

“I just tried to stay calm. Losing the third set was hard,” Nishikori commented after the match. “Playing aggressive tennis was the key to [winning]. Trust me, I hate playing five sets. I’m not doing this on purpose.”

That set up a clash with Henri Laaksonen in the third round on June 4. Nishikori took the opening set 7-5, and then his Swedish opponent retired due to a leg injury. After the grueling pace of his second-round match, the unseeded Nishikori played just 57 minutes against Laaksonen.

In the fourth round, he’ll face No. 6 seed Alexander Zverev of Germany.

The 23-year-old Igarashi completed the final step of the qualification process by riding the waves at the ongoing World Surfing Games on Monday, May 31.

Two years ago, Igarashi’s sixth-place finish in the World Surf League’s Championship Tour set him on the path to qualification.

In the latest JAPAN Forward Sports Talk podcast episode, International Surfing Association President Fernando Aguerre discusses his passion for the sport and the significance of surfing’s inclusion on the Olympic program for the first time. Check out the podcast here.

“My wish for the first [Olympic] surfing competition is that people around the world get exposed to the ocean,” Aguerre commented on the podcast. “What a fun place it is. It’s really a playground and it’s free. You can body surf, which is just surfing without a surfboard, and anybody can do that.”

The Australia women’s softball team became the first overseas Olympic squad to land in Japan for the Tokyo Games on June 1.

The Aussies traveled from Down Under to Narita Airport, setting up their training camp in Ota, Gunma Prefecture.

During its lengthy stay in Ota, the Australian contingent will be tested daily for the novel coronavirus, according to published reports.

Australia earned softball medals in each of the last four Olympic tournaments, including a silver in 2004. In 1996, 2000 and ’08, it collected bronze medals.

In its Olympic opener, Australia faces Japan, the gold medalist at the 2008 Beijing Games (the most recent Summer Games to include softball), on July 21.

“It’s incredibly brave that Naomi Osaka has revealed her truth about her struggle with depression. Right now, the important thing is that we give her the space and time she needs. We wish her well.”

“We’re working as one team that can win under two categories on the international stage. I feel the players played to get the result throughout and put their focus on each situation.”

ーHajime Moriyasu, Japan men’s soccer senior national team manager, after its 3-0 victory over the U-24 national team in a tuneup match for both clubs on Thursday, June 3 at Sapporo Dome.

“[When] people fall in love with the ocean, they will become ambassadors of the ocean, and this is to me something very, very important.”