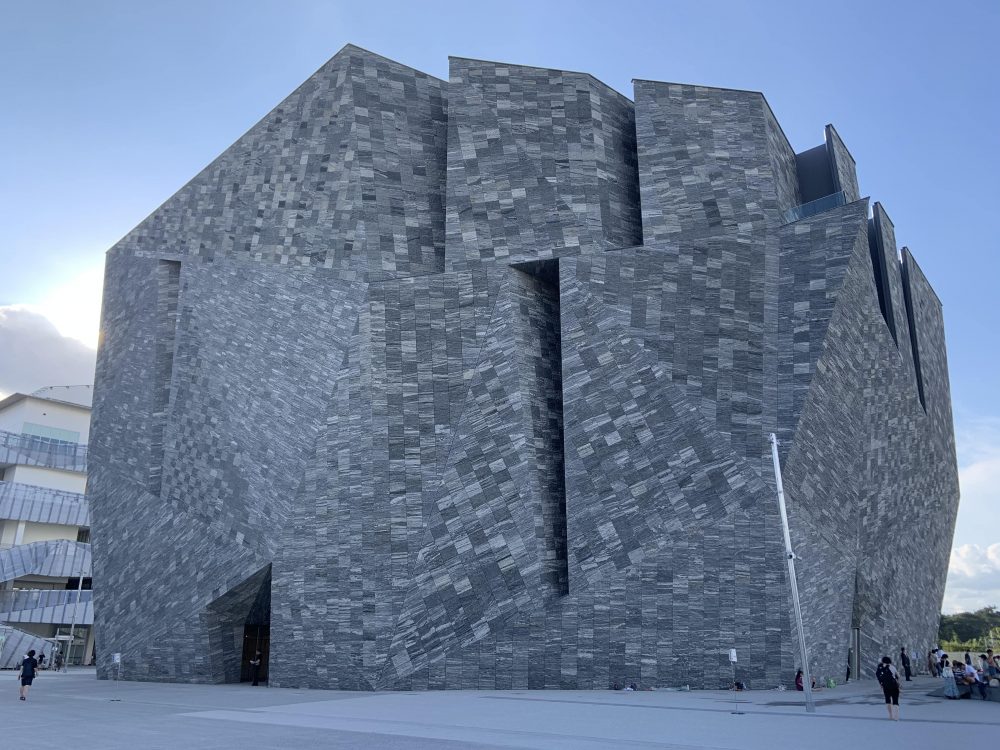 Within a 10-minute walk from the Higashi-Tokorozawa Station on the JR Musashino Line, an impressive, irregular-looking granite structure looms over a slightly elevated hill. Surely, it is a man-made building. But for a split second, the structure looks more like an unusual tectonic mass created by mother nature herself.

A closer look gradually reveals its multi-dimensional façade, alongside a shallow pool reflecting its image — a striking contrast against the suburban landscape.

This extraordinary structure is the Kadokawa Culture Museum, one of the latest projects designed by world-famous architect Kengo Kuma. The five-story structure is part of the multi-functioning Tokorozawa Sakura Town, a “contents mall” pioneering in fusing together a museum, an event hall, restaurants, bookstore, office, Entertainment Japan Anime Hotel, and the Musashino Reiwa Shrine (also known as Musashino Nimasu Uruwashiki Yamato no Miyashiro). It is organized by Kadokawa Corporation and Tokorozawa City. 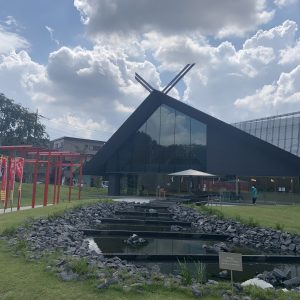 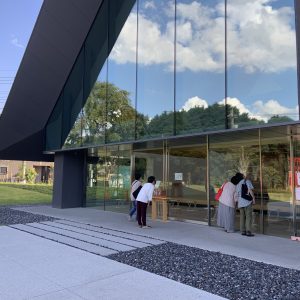 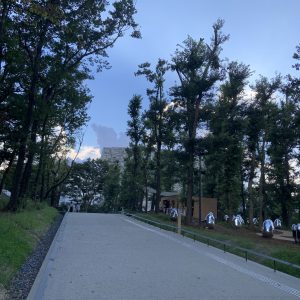 Adjacent to the site is the Musashino Woods Park, which serves as an outdoor extension of the Kadokawa Culture Museum, showcasing a permanent installation by teamLab, titled “Resonating Life in the Acorn Forest.” The entire site is set to open in early November of 2020, while a portion of the venue — including sections of the Kadokawa Culture Museum — has opened to the public from August 1. 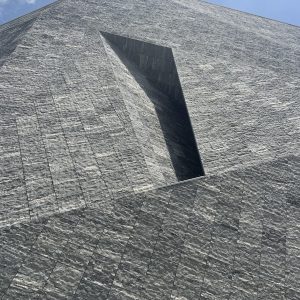 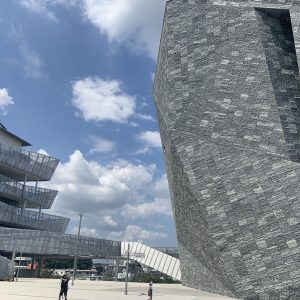 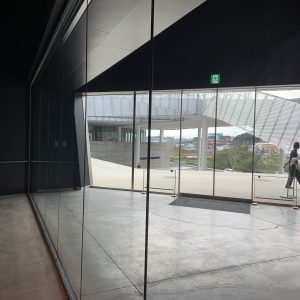 A look at this monumental Kadokawa Culture Museum brings to mind words that are numerous, if not full of contrasting duality.

First comes the sheer grandness of the structure. The architecture seems to urge the viewer to look upwards and feel its immense scale, much like the overpowering awe when standing in front of a rock formation at the Grand Canyon, which pulls the viewer to step in closer and investigate the minute layers of sedimentary rock.

At the Kadokawa Culture Museum, there is also the captivating multiplicity of angular granite slabs perfectly fitting together to form the entire building —  20,000 slabs organized into 61 triangular panels, to be exact. The rawness of the natural stone material feels rugged and organic, reminiscent of an archeological site.

Its highly complex and one-of-a-kind design as a whole yields a sophisticated, pristine aura, displaying a futuristic monument. Within the mixed residential, commercial, and natural surroundings typical of suburban commuter cities near Tokyo, the magnificent structure feels curiously dramatic, as well as subtly conscious of its role as a brand-new landmark.

Overall, these juxtaposing elements makes the Kadokawa Culture Museum and its associated developments an eccentric addition to the neighborhood, one that serves as a centerpiece while responding to harmonize with its surroundings. Kengo Kuma and Seigo Matsuoka, the museum director, confidently hope for the site to become a “legacy and a symbolic heritage for Tokorozawa City.”

So how did this impressive design come about?

On September 5, to celebrate the completion of the museum, a commemorative special discussion event was held with Kengo Kuma and Seigo Matsuoka. Under the theme “Museums and Architecture,” the two renowned thinkers discussed the ideas surrounding the project and how they were brought to reality through Kengo Kuma & Associates’ design methodology.

Of the many points discussed in the dialogue, a highlight was the unique and challenging architectural design of museums, known to be symbolic communicative centers of a city. As evident in the 12 museums designed by Kengo Kuma & Associates — including the V&A Dundee and China Academy of Arts’ Folk Art Museum — what is first and foremost prioritized is locality. Kuma emphasized that his design method always starts with closely examining the surroundings of a site and then creating a design that naturally merges with its cultural and environmental characteristics.

This means the priority is on the land and its natural materials. As it is also emphasized in the exhibition, “Kengo Kuma: The Birth of an Art Space Connected to Nature” (on show at the Kadokawa Culture Museum until October 15), wood and stone are representative of Kuma’s most recent structures.

The notable National Stadium in Shinjuku, Tokyo, brimmed with multi-layered eaves, is one that abundantly uses wood as its primary material. The Kadokawa Culture Museum, on the other hand, consciously uses stone, another material tied to the land but with opposing characteristics from wood.

Through an innovative design, the possibilities of stone as a flexible material are expanded, presenting the structure as a natural extension from within the Musashino Upland. Referring to this stylistic approach as “crust architecture,” Kuma envisioned the Kadokawa Culture Museum as one that was formed by forces deep within the earth, breaking through the surface.

Indeed, during the “Museums and Architecture” discussion, Matsuoka commented that Kengo Kuma’s designs are distant from being box-like. He feels that “Kengo Kuma’s architecture instead looks at spaces, gaps, and openings.” The strong connections with the environment create an organic and smooth divide between the man-made and the nature-made.

In addition, Kengo Kuma spoke of another aspect of his design methodology that focuses on particles (ryushi) of a structure. This is in contrast to the so-called frame composition, which Kengo Kuma feels increases the artificiality of a structure.

The particle approach does not look at segments of a structure frame by frame. Instead, it looks at each particle, an element that does not have a set shape or size and can shrink or enlarge according to the specific needs. This is evident in the Kadokawa Culture Museum, where there are no frames, usually created by hard lines dividing each building component. Instead, the stone slabs are simply placed next to each other with no fillings in the gaps. What remains, according to Kuma, are “particles” that dynamically merge together. 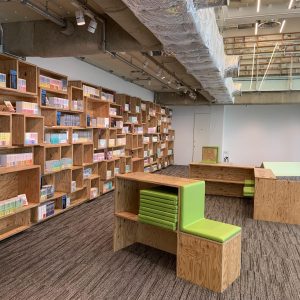 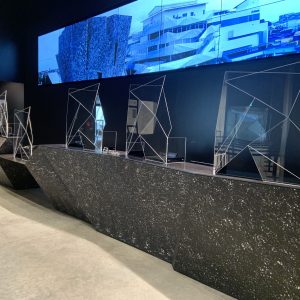 After searching for words to describe the exterior of this peculiar structure that showcases the materiality of stone, a question that immediately nudges the viewer is, “What’s inside?” Surely, there must be a world of wonder within this geode-like mass.

This invitation is exactly what the creators of the Kadokawa Culture Museum envisage for visitors. Matsuoka hopes that visitors are attracted to the compelling architecture, and then led into a space that stimulates one to think, to associate, and to envision an interdisciplinary mixture of discoveries.

In order to offer a museum space like never before, the Kadokawa Culture Museum offers multi-use rooms, such as a Grand Gallery for art and science exhibitions, a Manga and Light Novel Library, an Entertainment Japan Anime Museum, and two libraries on the fourth and fifth floors. The libraries, called Edit Town and Bookshelf Theater, will carry books of all genres in an unprecedented format alongside projection mapping attractions. The Bookshelf Theater will feature eight-meter-high book shelves fused with the interior and carrying an energy that extends upwards.

Just like the stone architecture of the museum that slightly extends outwards from the base, the interior of the museum also elicits a limitless, upwards expansion. The Kadokawa Culture Museum creates spaces for letting go of limits and gaining a hold of unrestrained, imaginative power that is oftentimes hidden somewhere within us, waiting to be revived.

The Kadokawa Culture Museum visually displays the symbolic weight of a landmark museum. At the same time, within this heavy mass, doors are opened to a site of exploration that guides visitors to new discoveries that may not have been revealed otherwise.

Exceeding the limits of exploration will not only be encouraged but urged here, whether that is through viewing exhibitions, cracking open newly discovered books, entering the immersive spaces within, or simply gazing up at the dimensions of the architecture.

As Matsuoka said, “Culture and civilization have a history of somehow making visible the invisible powers.” Visiting the Kadokawa Culture Museum and the Tokorozawa Sakura Town will undoubtedly be an opportunity to explore the “invisible powers” around us and within us.

Kadokawa Culture Museum: Follow this link for information on the structure itself, access, hours, entry, and exhibits.

teamLab installation: Follow this link for more information on access and hours for teamLab’s installation, “Resonating Life in the Acorn Forest.”