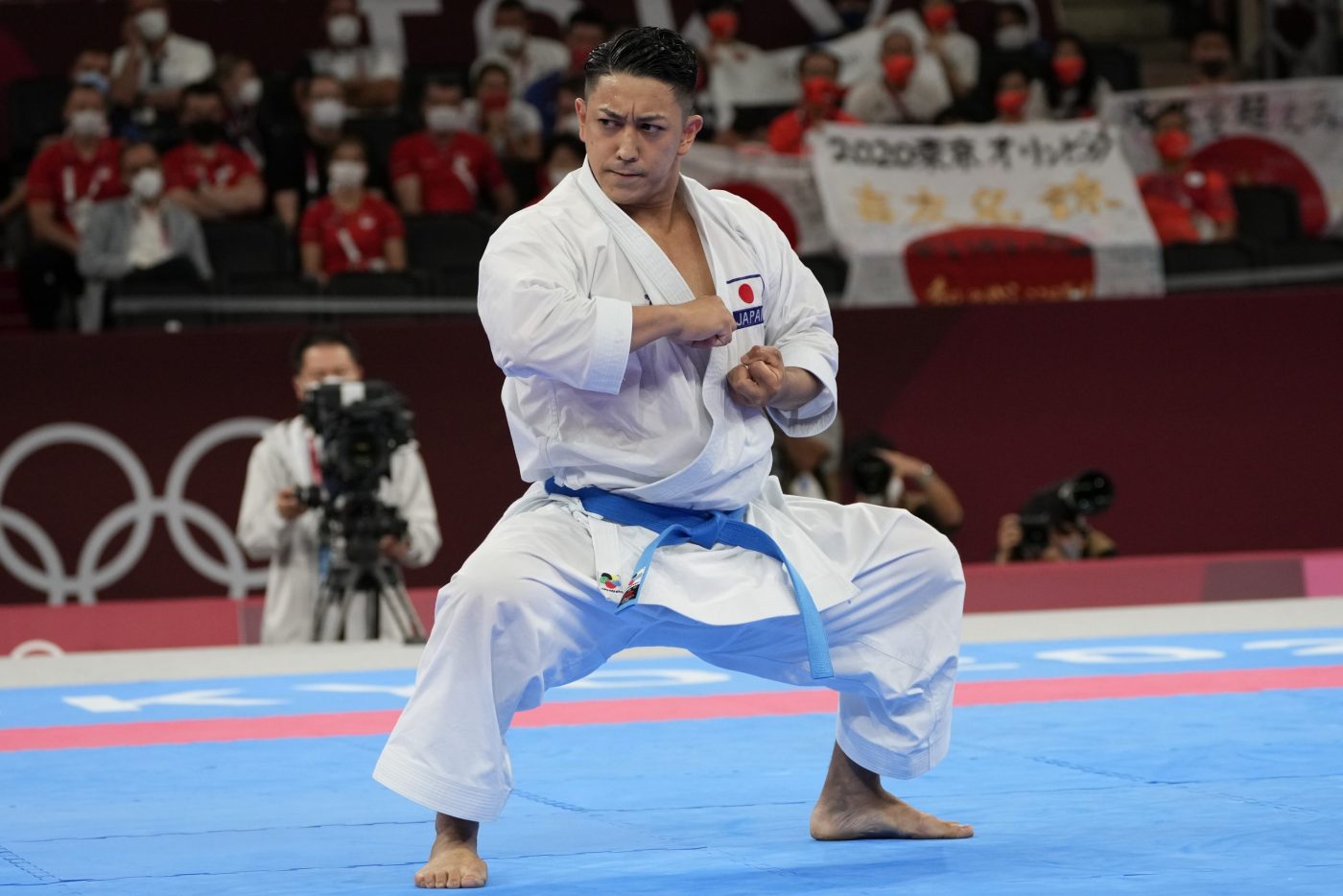 It was another hot and humid summer day in the center of Tokyo on Friday, August 6.

Tokyo’s premier martial arts venue, the Nippon Budokan, has been graced with not only the top martial artists of the world, but also as a musical venue for legends like the Beatles, the Rolling Stones, and ironically the writer performer of the Kill Bill music, Battle Without Honor and Humanity, Tomoyasu Hotei. So, it is only fitting that the first time that karate has been included in the Olympics that it should be held here and give birth to some karate legends.

The first event of the day began in the morning with the men’s kata event. The schedule and order of events followed the previous day. Pool A favorite, silver medalist in both the 2021 European Karate Championships and the 2018 World Karate Championships, Spain’s Damian Quintero led convincingly into the qualifying round with his performances of kururunfa and ohan dai, earning him a score average of 27.37 points.

In the qualifying round, Quintero secured his place in the final with a score of 27.28 for his performance of anan dai. The two remaining competitors, Ariel Torres Gutierrez of the United States and South Korea’s Heejun Park, had to battle it out against the runners-up of Pool B to decide the bronze-medal positions.

As expected, the other finalist and winner of Pool B, was reigning world men’s kata champion Ryo Kiyuna, with his performance of anan dai obtaining a high score of 28.72. The Okinawa native had received consistent 28-point scores in the preliminary rounds, earning him an average of 28.33.

With an attitude of humility that was reflected in the precision of his kneeling posture of respect at the end of the competition, Kiyuna later carried his message to Kyodo News, saying: “I want to express my appreciation for being able to compete at this stage. I wouldn’t have been able to compete here by myself so I am just so thankful.”

In the first match for bronze, Diaz Fernandez went head to head with Gutierrez. First to perform, Diaz Fernandez nominated the kata, chatanyara kushanku, his spirited scoring 26.34. Next up was 2019 Pan American Championship gold medalist Gutierrez, with his rendition of anan. His final score was 26.72. With his powerful performance he inched out his opponents by 0.38 points.

As a result, Gutierrez received the first bronze medal.

In the second match for bronze, Park faced off with Sofuoglu. Park chose to perform suparinpei as his final kata for the competition. Sofuoglu responded with a masterful gojushiho sho. A clear win for Turkey to take the bronze, but Park may be a name to watch for the future.

In the final, first on the mat was Quintero, who performed an admirable suparinpei scoring a respectable 27.66 points. Next up was Kiyuna, who demonstrated ohan dai with a high score of 28.72. As expected, Kiyuna’s superior performance in defeating Quintero echoed what happened in the finals at the 2018 World Karate Championships.

Another gold medal for Japan, adding to its record-breaking Olympic-medal haul.

In the first semifinals, Yin, who took the silver medal at the 2018 World Karate Championships in the women’s U-61 division, faced off against Lotfy, the 2020 African Championships gold medalist. Yin took the first point about the halfway point of the match. Lofty came back to equalize in the last 30 seconds, but it wasn’t enough.

The match tied at 1-1, but a win was awarded to Yin on the judge’s decision. Lotfy had to settle for a bronze, and Yin advanced with a chance to win the gold medal.

In the second semifinal bout, Prekovic, the reigning world and European champion in the women’s under-61 kg division, faced Coban, who claimed a bronze medal in this year’s European Karate Championships.

Prekovic scored a point early in the bout, but both fighters were warned for lack of engagement. Prekovic stole another point, after which she spent the rest of the fight running down the clock, for which she was warned again. Coban only stepped up the pace in the closing seconds conceding a place in the final and taking a bronze medal.

RELATED: The JAPAN Forward Guide to Karate in the 2020 Olympics

In the final, Yin looked quietly confident as she faced off against Prekovic, but Jovana was gradually closing in. A missed chance at ippon by Prekovic meant that the match ended in a scoreless draw. Thus, the decision went to the judges, and three blue flags were raised for Prekovic, with a solitary red flag in favor of Yin. Prekovic won the gold medal.

Maybe it was the heat of the summer day, but the preliminary rounds were rather lackluster, with no fighters particularly shining above all of the others.

The first semifinal was between Harspataki and Aghayev. Harspataki started out strong, but opened himself up to a sweep and finished a 3-point score by Aghayev in the first 35 seconds of the match.

Aghayev made the most of the situation and picked off Harspataki’s attempts to pull back the points. Aghayev won 7-0 and secured a place in the final. Harspataki earned a Bronze.

In the second semifinal between Busa and Horuna, Busa received an early point. Horuna made a spirited attempt at trying to get the match back, but couldn’t find his form and was picked off by Busa.

The final match of the day was between Aghayev and Busa. Both fighters were hungry for the gold. Aghayev was warned for excessive contact just after the 2-minute mark for a punch to the face. With just 1:18 left on the clock, Busa took the first point. This time, Aghayev found himself chasing the points. With 17 seconds remaining, Busa hit him hard in the face. One excessive contact warning each.

The last 17 seconds was an intense tussle by both fighters, but the clock ran down making Busa the Olympic gold medalist for the men’s kumite under-75 karate division.

The Olympic karate tournament wraps up on Saturday, August 7 with both the men’s and women’s heavyweight events (over-75 kg).