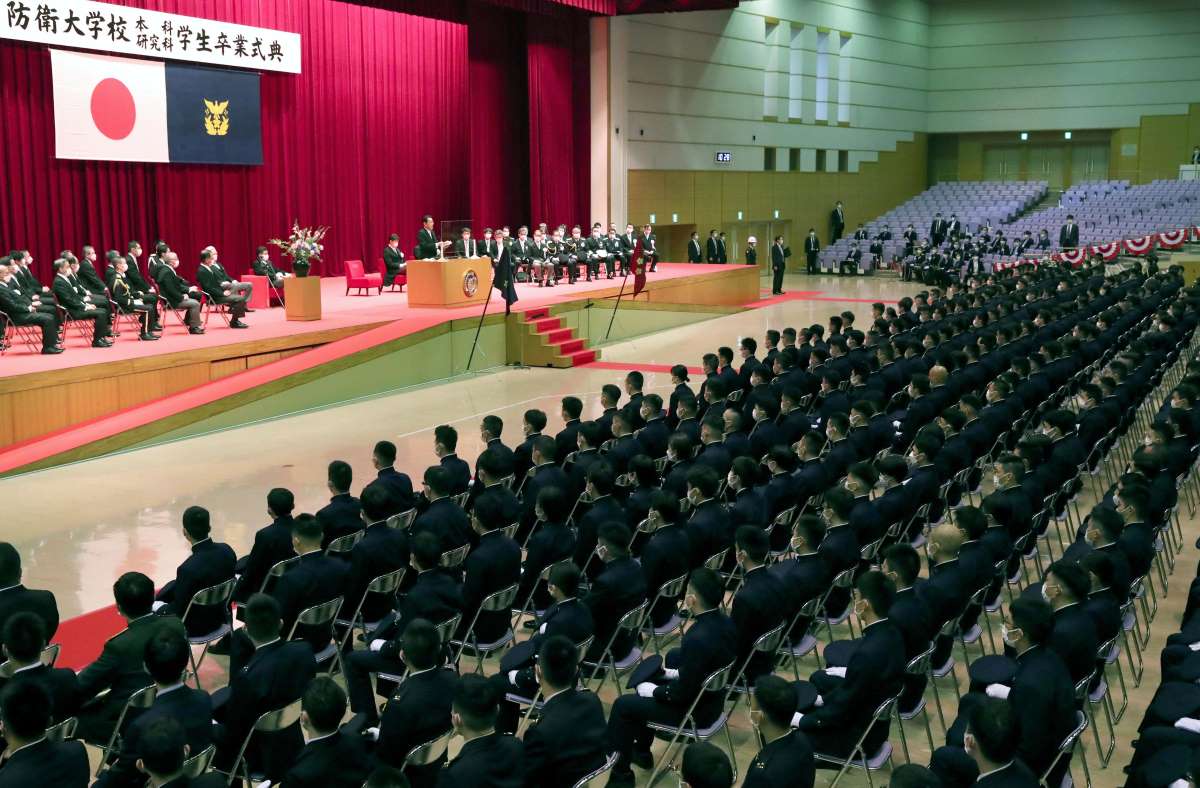 Graduation ceremony at the National Defense Academy, where Prime Minister Fumio Kishida delivered an address to the graduates on March 27, 2022 (Pool photo).

Whether it be the security of mankind or nations, there are always precedents. Barely had the world entered the most recent phase of the COVID-19 pandemic – perhaps the greatest non-traditional security challenge in a century, when a textbook traditional security conflict unfolded in Ukraine.

Japan’s Prime Minister Fumio Kishida described the Ukrainian crisis as one that ‘threatens to shake the very foundation of international order’ and could potentially lead the world to the ‘greatest crisis since World War II’.

Addressing the graduation ceremony of the National Defense Academy in Yokosuka, Kanagawa Prefecture southwest of Tokyo, Kishida declared that Tokyo would not rule out any options to fundamentally strengthen its defense capabilities. This comes as the government aims to revise Japan’s National Security Strategy by the end of 2022.

He further stated that the crisis in Ukraine will determine the future state of the international community. A “unilateral change of the status quo by force must never be allowed in the Indo-Pacific, especially in East Asia ... the security environment surrounding our country is becoming markedly more serious,” he said.

His caution came against the backdrop of increasingly bold attempts by China in recent years to unilaterally change the status quo in the East and South China seas, as well as successive ballistic missile launches by North Korea. For this he stressed the importance of strengthening cooperation between Japan’s Self-Defense Forces and Coast Guard, as China increasingly projects its power as it strives to assert sovereignty over the Senkaku Islands.

Earlier, PM Kishida visited India in March for a bilateral summit with his counterpart. Unlike previous India-Japan summits, this one was announced on relatively short notice, just a day prior departure, by Tokyo.

In his meeting with Indian Prime Minister, Narendra Modi, both leaders found concurrence in the seriousness of the ongoing conflict and humanitarian crisis in Ukraine while assessing its broader implications. Referring particularly to the Indo-Pacific region, they emphasized that the contemporary global order has been built on the UN Charter, international law, and respect for sovereignty and territorial integrity of states.

Kishida and Modi urged for an immediate cessation of violence and noted that there was no other choice but the path of dialogue and diplomacy for resolution of the conflict.

It is being increasingly foreseen that Russian actions could embolden China to seize Taiwan, compelling reunification by force if necessary. In his influential 1979 book Theory of International Politics (McGraw Hill), Kenneth Waltz argued international politics was an experience consisting of interactions among units in a condition of [extreme] anarchy, and those interacting units were states.

Following Kishida at the National Defense Academy graduation ceremony, Japan’s Defense Minister, Nobuo Kishi too reiterated that anyone can see that the area around Japan and the world are entering turbulent times.

The messaging by Kishida and Kishi would seemingly travel far in the region. There were 22 graduating foreign students from Southeast Asia including Cambodia, Mongolia, The Philippines, Thailand, East Timor, Vietnam, Laos and Myanmar at the ceremony that day.

However, limits require agreement, or, at least some kind of mutual recognition and acquiescence. Besides, agreement on limits is difficult to reach, not only because of the uncertainties and the acute divergence of interests, but because the option of negotiation is severely inhibited, both during war and before it begins. This is primarily because communication becomes difficult between adversaries in times of war.

The most significant situations are those in which there is a conflict of interest between the parties involved. The case of two or more parties having identical interests, brings out clearly the principle that will then serve to solve the problem, one of tacit bargaining over conflicting preferences.

The Russia-Ukraine crisis is rooted in the complex history of the two countries, including post-1992 when both countries achieved independence following the dissolution of the Union of Soviet Socialist Republics (USSR).

The chain of events unfolding today reaffirms the enduring relevance of the realist school in international politics: no agency or institution that can protect states from each other. The competition and race especially among Great Powers goads them to compete for preeminence.

However, although the realist school of thought downplays the role of norms as strong constraints on Great-Power behavior, visibly, it’s these very norms that have played a key role in explaining the global response to Russia’s invasion.