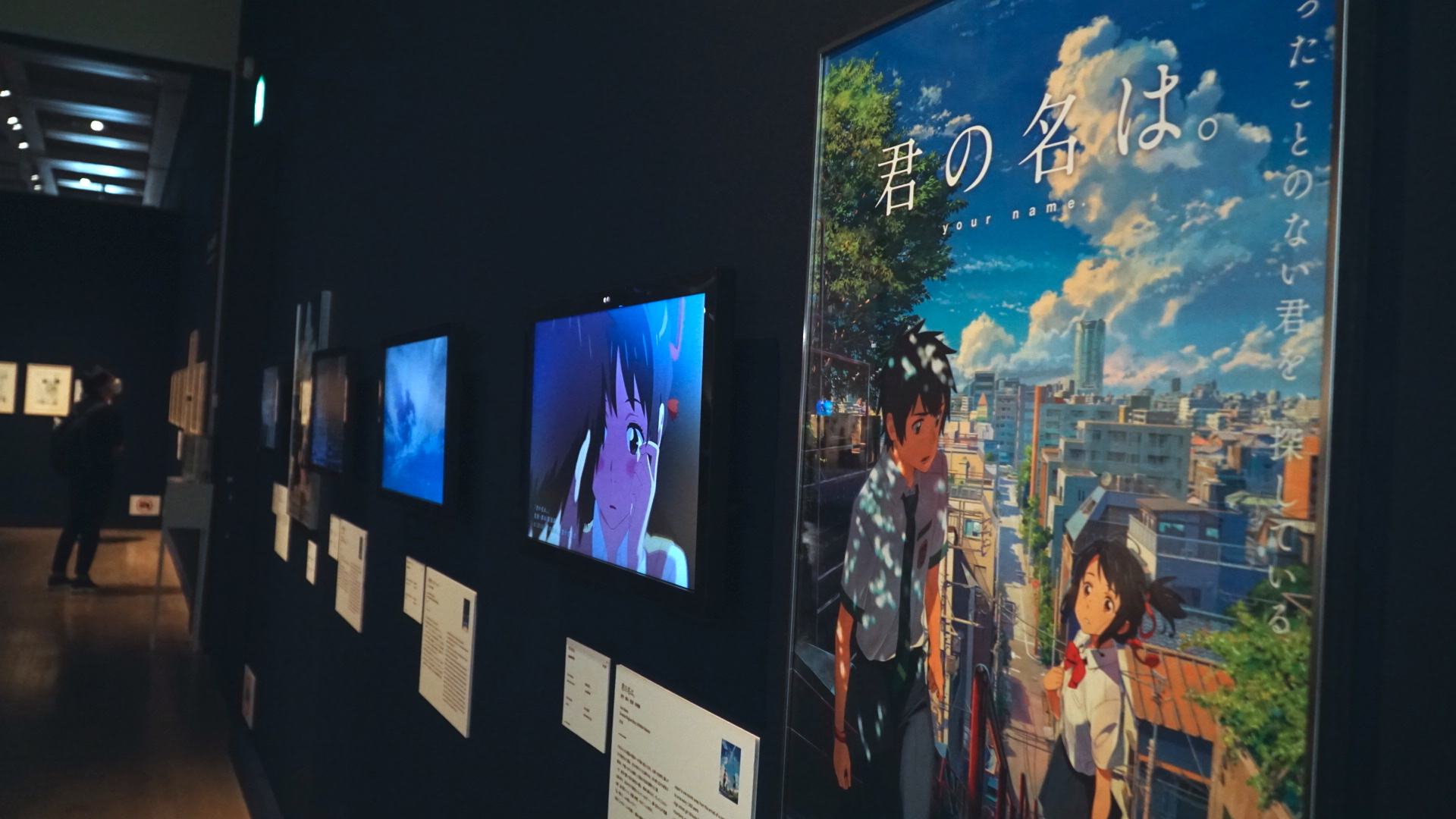 Have you ever watched a film and become so entrenched in the story that you wanted to visit the locations featured in it, just to experience the feelings they evoked in the characters?

What happens when the film is in fact an animé, a manga, a video game, or a tokusatsu (SFX film)?

At the National Art Center in Tokyo, a new exhibition called MANGA⇔TOKYO presents a selection of works from Japanese popular culture with stories that take place in Tokyo.

Blurring the line between fiction and reality, the exhibition seeks to offer a wide-ranging sample of Japanese pop culture, but also a new lens to appreciate the cosmopolitan metropolis. 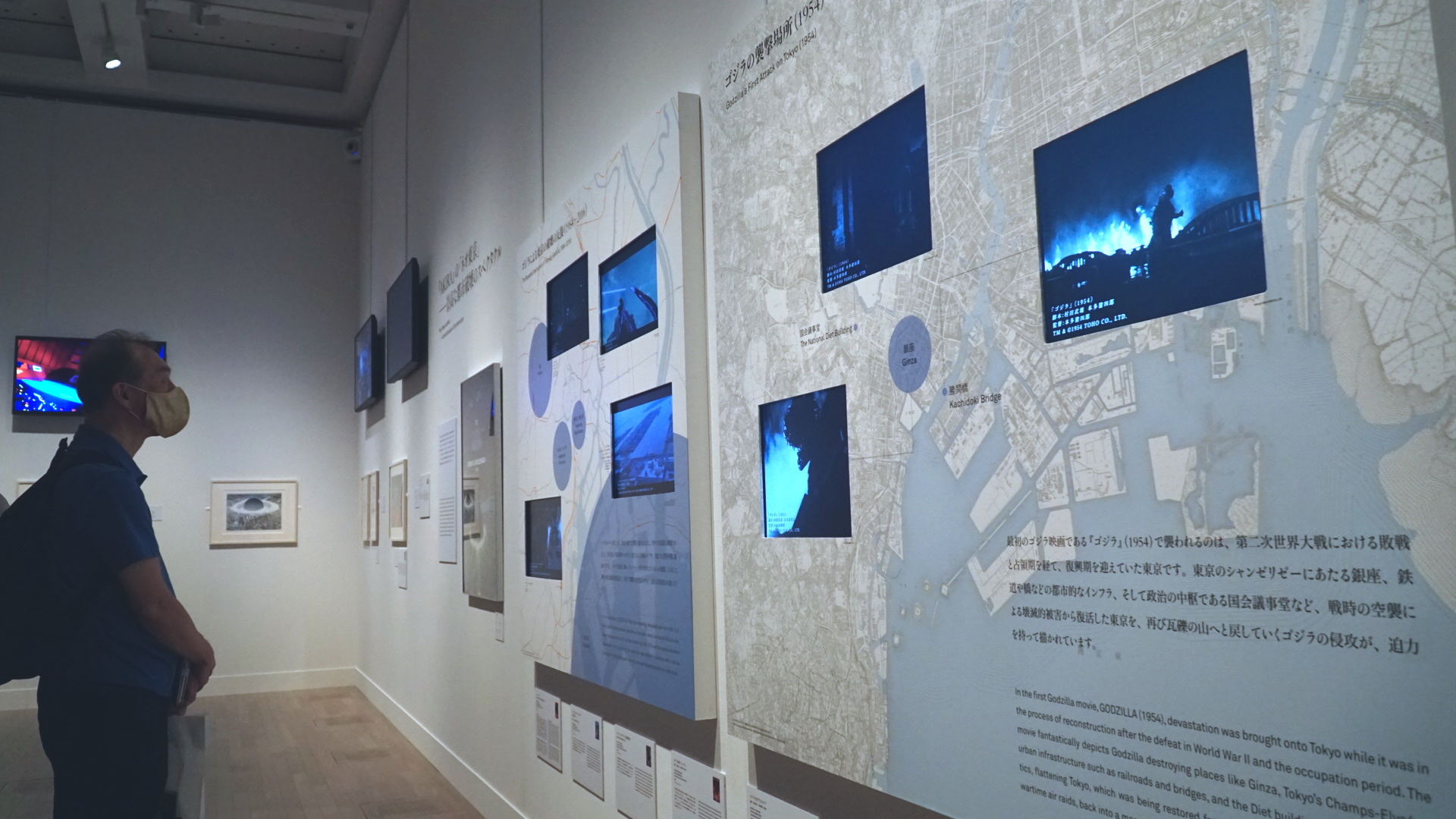 At the exhibition, JAPAN Forward spoke to Takako Masumi, a member of the curator team, to learn how the project came together and what it seeks to convey, and to find out what visitors can look forward to even in this time of COVID-19. 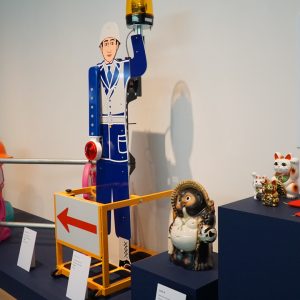 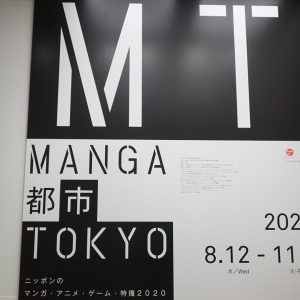 “You know how, if someone from the Louvre [in France] comes to Japan, it’s something which makes the Japanese quite proud? We thought that we would try to do the same, bringing Japanese culture abroad.”

This is how Ms. Takako Masumi illustrated the starting point of the traveling exhibitions — the idea of bringing Japanese animé, manga, and games overseas.

MANGA＊ANIME＊GAMES from JAPAN (June 24 to August 31, 2015) was born, followed by the same exhibit held in Thailand and Myanmar. Then, in 2018, as part of Japonismes 2018: les âmes en resonance, the organizers held the MANGA⇔TOKYO exhibition (November 29 to December 30, 2018) in Paris, France, which attracted over 30,000 visitors.

The supervision was provided by Kaichiro Morikawa, an associate professor in the School of Global Japanese Studies at Meiji University and a specialist in architecture.

He proposed that manga shouldn’t be just an introduction to Japanese pop culture, but used a theme. And what could be better than presenting it in Tokyo itself, the biggest city in the world, and the one that has become the emblem of modern and cyberpunk-esque culture?

Ms. Masumi explained that the concept was drawn up also with the Tokyo 2020 Olympics in mind. “Tokyo was gathering a lot of attention because of the Tokyo Olympics.”

In addition, the curator specified there was also the will to show a different side of the metropolis.

“By choosing works which would show Tokyo as the background to a story, or characters that end up in Tokyo, we wanted to show the particularities of Tokyo itself.” 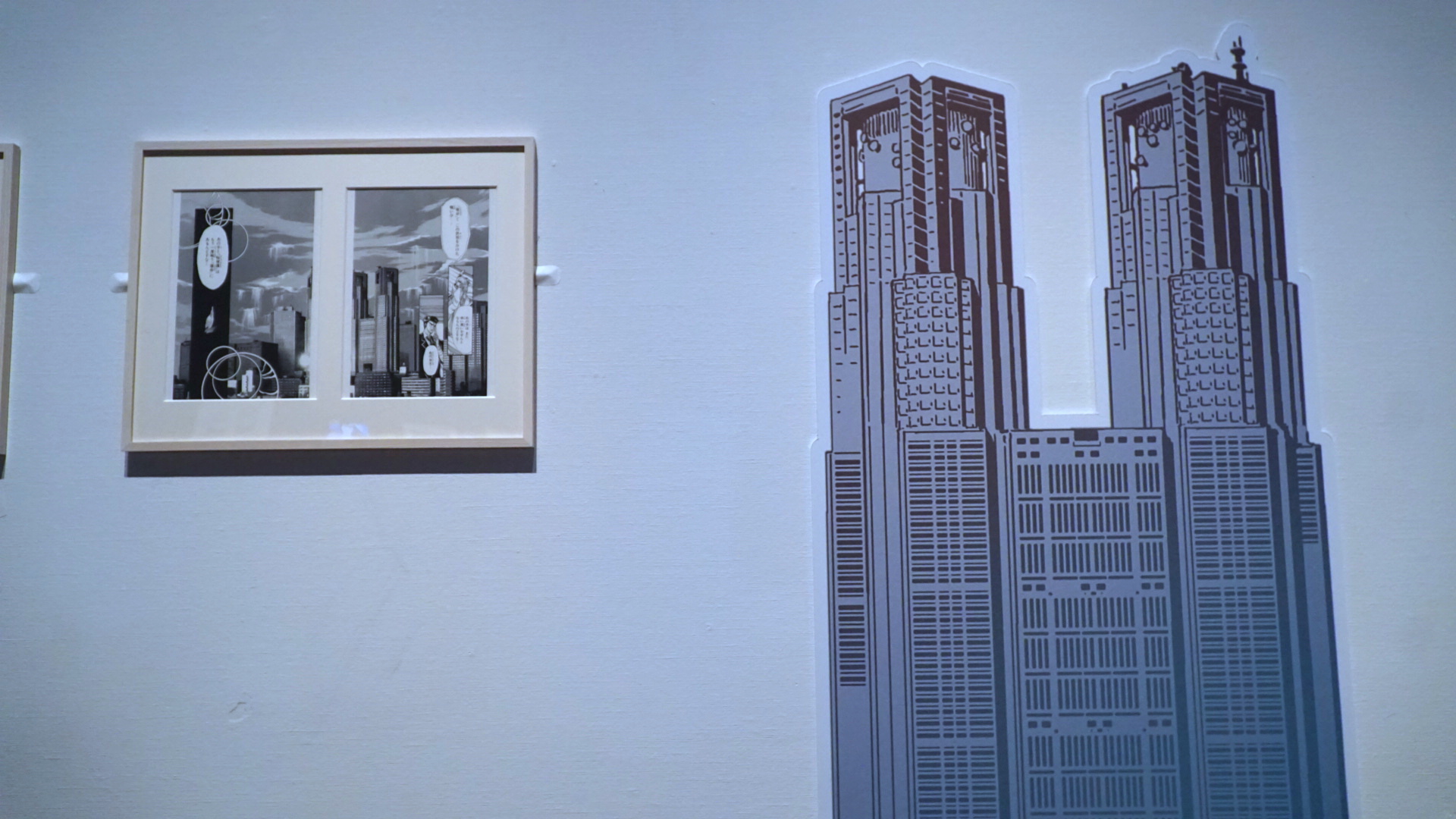 Even for someone who has lived in Tokyo for several years, visiting the exhibition was an unexpected opportunity to learn something new about the city.

Exploring the first section connected to destruction and natural disasters, one aspect that stood out was the resilience of the city to rebuild itself.

Through different mediums — such as maps dating to the Second World War, ukiyo-e, and historical manga — we are reminded of the times that Tokyo was destroyed, be it during the Edo period, the Great Kanto Earthquake in 1923, or the Tokyo firebombings during the Second World War. In all these cases, there was little left of Tokyo. 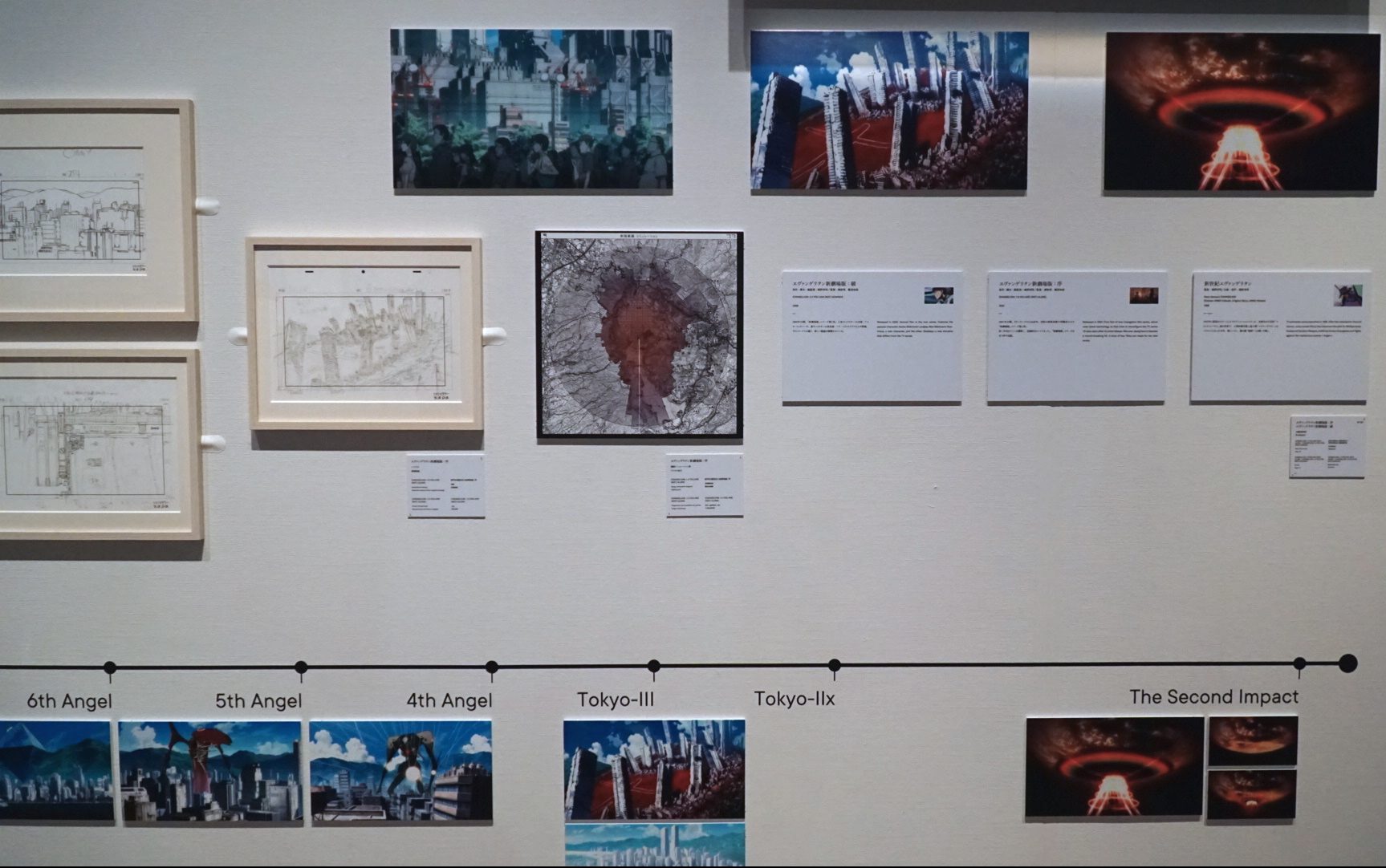 Ms. Masumi seemed to suggest that this history, although tragic, had in some ways taught people that there was a way back from complete destruction:

I think, perhaps, there is no city in the world that has been destroyed [in reality and by various media] as many times as Tokyo has. Of course, New York as well has been destroyed in the plots of many films, but with Tokyo you see destruction to the point that reconstruction seems impossible, as in the case of [the movie] Akira for example. And in all these cases, always Tokyo is born again.

Continuing through the exhibition, one also senses the multidimensional history of the last century, which is reflected in the city and the manga that portray it.

One example is the section on the economic bubble era, which continued until the late 1980s. As the curator put it:

The bubble era was a period of high-rise buildings, and there is a lot of footage of young people enjoying their life outside. But with the bursting of the bubble, there was a trend to try to find happiness inside the walls of a house, even if it is only a five-mat room! It was also the period when convenience stores became established.

All of this can be seen in the works in the show: convenience stores, lush cars, the disappointment of work in the post-bubble era. On a purely architectural level, the footage of the immensely popular Lupin III, much like a time capsule, allows us to enjoy the Shinjuku area of Tokyo during that time.

Ms. Masumi explained popular culture’s effectiveness in reflecting the culture of the age:

In some ways, I think that manga has the capability of being one of the first mediums to reflect the culture of a time. From manga, then an animé will be born. 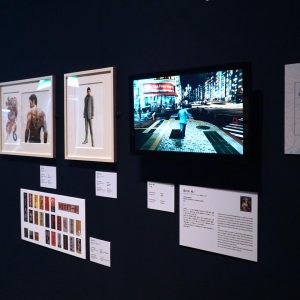 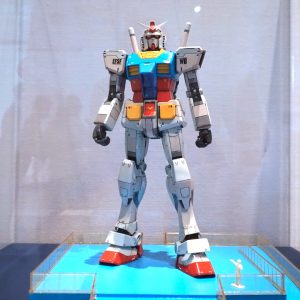 When you enter the exhibition, the star of the room is a miniature model of Tokyo. As you walk around the room, mini Tokyo sprawls in front of you, occupying a large section in the middle, with projections of famous animé such as Akira (Tokyo Movie Shinsha, 1988) running in the background.

With each film reference comes a specific Tokyo location that is marked on the map. There are pinpoint references, such as Shinjuku Gyoen park, which appears in Makoto Shinkai’s The Garden of Words (CoMix Wave Films, 2013), and more abstract ones such as Tokyo Bay and the urban background for the destruction wreaked by Godzilla.

The effect is that fiction becomes another reason to appreciate reality.

The curator Ms. Masumi explained it by saying:

How many people have wanted to visit Rome after watching Roman Holiday with Audrey Hepburn? It is no different, but this time is brought to you through the lens of fiction and pop-culture.

How Fiction Can Bring People to Reality

It’s not an overstatement to say that Japanese pop culture is a unique phenomenon, nor that it has managed to attract several generations of young people to explore Japanese culture. It has been popular both with its Japanese and foreign audiences.

With the pre-coronavirus increase in international travel, a growing number of people have come to Japan to explore aspects they first got to know through animé.

This could be even a simple city landscape. I personally had a friend who nearly cried when he saw the Japanese rail crossing. “It’s just like the animé I love watching,” he told me, dare I say, emotionally. 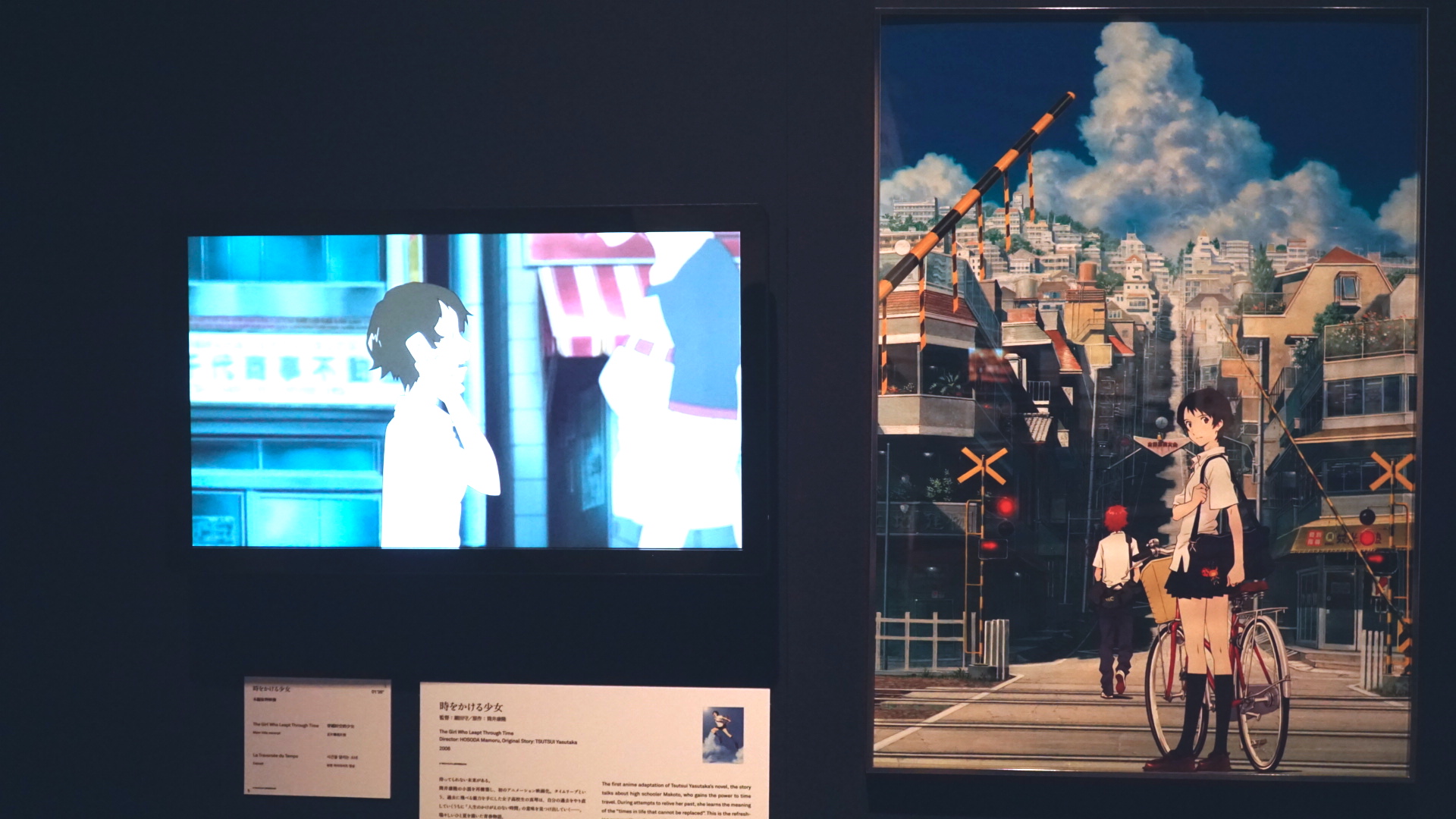 And he’s not the only one. A Yomiuri newspaper article back in 2016 noted that the location of the final scene of Makoto Shinkai’s blockbuster Your Name (CoMix Wave Films, 2016) — an anonymous stairway in a backstreet near Yotsuya station — became a pilgrimage for fans of the film.

A temple with a 1,270-year history near Ochanomizu station called Kanda Shrine has become a must spot for fans of the animé LoveLive! The shrine has even started selling animé-themed emas — the votive wooden plaques upon which to write wishes.

One might be tempted to brush this off as Japan trying to appeal to Japanese and foreigners alike through the medium of animé, much like the soft power policy enacted by the Japanese government called “Cool Japan.”

But I would argue, it was more than that. It was almost a case of “life imitates art.” Perhaps through the different lenses of culture, even in this trying time of the COVID-19 pandemic, we can appreciate Tokyo’s reality once more.

Barrier Free: The museum is accessible to those with special mobility needs.