‘No Charity, but a Chance!’ is This Hot Spring City’s Secret to a Barrier-free Society 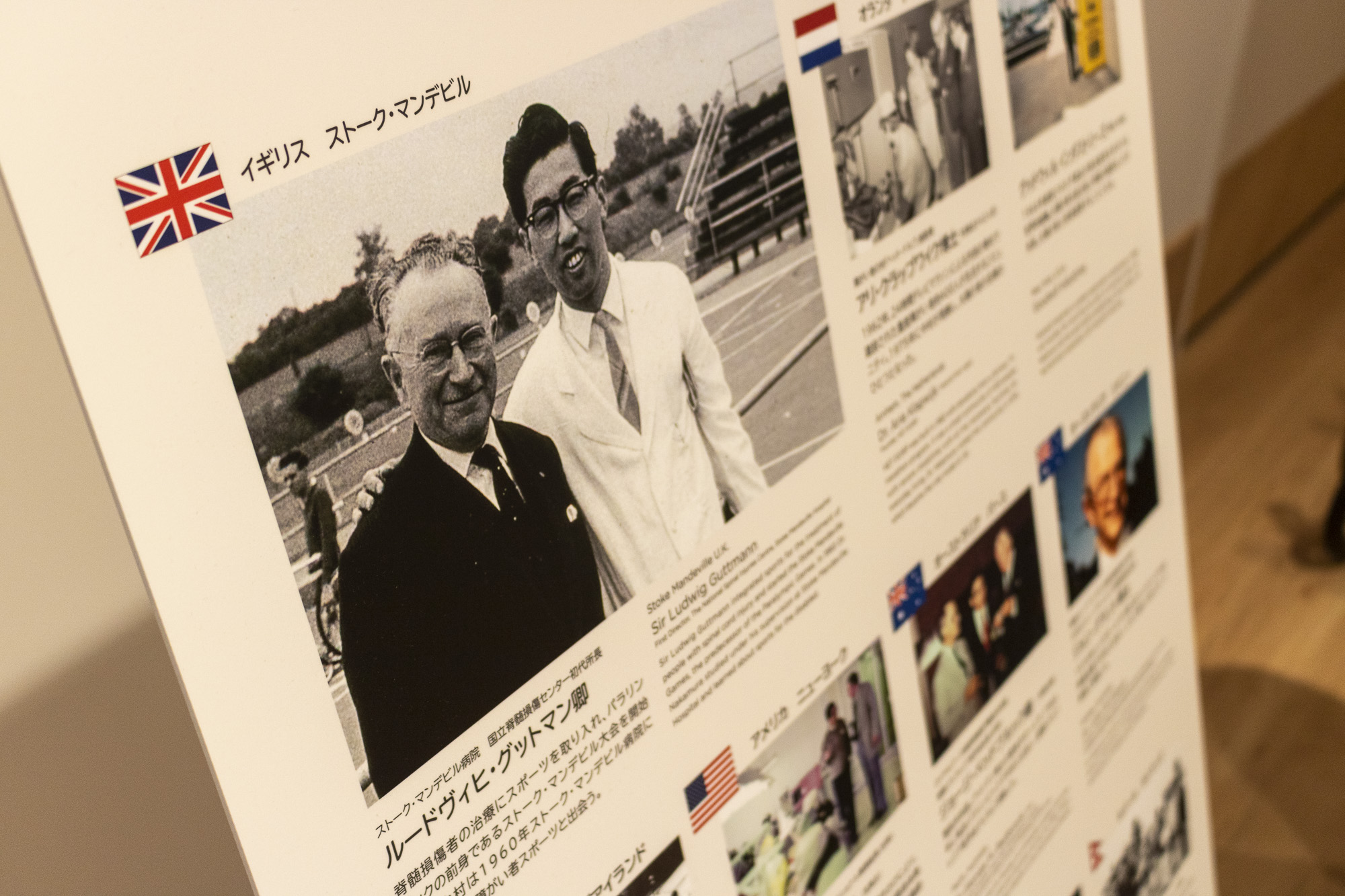 Newspaper article about Ludwig Guttman, trailblazer in Para Sports, and Yutaka Nakamura, who brought that philosophy and more to Japan.

Beppu is a city well known for its hot springs. Typically more than 8 million people a year ー domestic travelers as well as visitors from abroad ー stop by this city located in Oita Prefecture, in the Kyushu region of Japan.

But Beppu City is also known for a different reason.

Around November each year, many wheelchair users come to this city from around the world. They come to participate in the world’s first wheelchair marathon competition, the Oita International Wheelchair Marathon.

Why does this famous hot spring city hold a wheelchair marathon competition?

JAPAN Forward took advantage of an opportunity to visit Japan Sun Industries ー “Taiyou no Ie” ー an organization based in Beppu providing a variety of opportunities and support for those with disabilities. There, we learned more about the doctor who devoted himself to helping people with disabilities, his groundbreaking work in creating job training and jobs, and his role in Para Sports. Here is part of his story.

Father of Para Sports in Japan

The world’s first wheelchair marathon, the Oita Wheelchair Marathon, was founded by Yutaka Nakamura (1927-1984), “The father of Para Sports in Japan.”  It was the start of a much greater endeavor to bridge the gap between those who have physical disabilities and the rest of society.

After completing medical studies at Kyushu University, the Beppu native and orthopedic surgeon went to England to study medical rehabilitation. There he met and was deeply influenced by Dr. Ludwig Guttman, who is called “The father of the Paralympics.”

Nakamura was impressed that doctors in England introduced sports into rehabilitation. He saw people with disabilities really enjoying their rehabilitation, and that they returned to society in just a few years. In contrast, rehabilitation in Japan at the time was a long and painful ascetic process. He became determined to introduce sports as rehabilitation to Japan.

After he came back to Japan, he founded a sports festival for people with disabilities. His work was not confined to the benefit of Japanese only. After serving as the flag bearer for Japan in the 1964 Tokyo Paralympic Games, Nakamura founded the FESPIC Games (Far East and South Pacific Games for the Disabled), today’s Asian Para Games.

Through the Paralympic Games, he was shocked at the difference between the Japanese players and the players from abroad. While athletes from home and abroad both thoroughly enjoyed the Games, the athletess from abroad were independent not only mentally, but also financially. The Japanese athletes, however, were not independent. They didn’t have jobs, and after the Games, they could not make a living without financial and physical assistance.

This experience was formative in Nakamura’s development of his philosophy, “No Charity, but a Chance!”.

He went on to found Japan Sun Industries in 1965, dedicating it to helping people with disabilities train and secure jobs, thereby gain independence.

No Charity, But A Chance!

After founding Japan Sun Industries, Nakamura engaged with some of Japan’s best known companies to establish businesses to train people with disabilities. The companies are named with the word ”taiyou” (“sun,” in Japanese) attached to the name, like SONY-Taiyou, OMRON-Taiyou, Fujitsu-Taiyou, Honda Taiyou, Oita Bank-JSI, and others.

Following the Nakamura philosophy, “No Charity, but a Chance!,”  these companies don’t simply take care of people, but teach and train them for real jobs and independent living, and give them an opportunity to be creative parts of society.

The results have been inspiring. Despite their physical disabilities, those trained under the system developed skills that are highly evaluated and have played important roles in the design and production of products and services that everyone knows well.

The employees, once trained, developed many special tools used by the population of that era and in many cases still today. Examples include SONY audio products. SonyTaiyou-trained employees were involved in producing the Sony Walkman from the very beginning, and they still play an important role in the design and production of SONY’s flagship headphones.

Many of these products are displayed in the Sun Museum in Beppu, which opened in 2020. The museum tells visitors the story of Yutaka Nakamura and Japan Sun Industries, and visitors can experience barrier-free tools like sports wheelchairs for themselves.

Importantly, every year, children who go to local schools in Beppu visit this Japan Sun Industries, and now the museum. Their interaction is helping Beppu serve as an example for Japan to achieve the barrier-free society.

Toward a Barrier-free Society

It’s not unusual for those without disabilities to find only a few opportunities for interaction with people who have disabilities, even though they live in the same region in Japan. My hometown in Tokyo, for example, has one of the biggest schools for people with disabilities, especially for those of compulsory school age. But only a few of the children in the region who are not disabled will have any opportunity to engage with them.

In other regions, non-disabled children who see a person with disabilities are likely to give their disabled counterparts only a curious glance. Then, they graduate from school and become members of society. Without interaction, can such people achieve a barrier-free society?

In contrast to this, the children (and adults) in Beppu have many opportunities to interact with people with disabilities on an everyday basis. One example is the Sun Store, a grocery store run by Japan Sun Industries. This is the first supermarket in Japan designed for wheelchair users who work as cashiers and other employees. But similar employees also work as bankers and other local white collar jobs.

Supermarket designed for employees with disabilities serves all of Beppu society.

Children in Beppu interact with people with disabilities every day. They grow up accepting that those with disabilities are just as much a natural part of our society. People of Japan Sun Industries believe that this is the best way to eliminate prejudice.

Therefore, there is much anticipation that the Tokyo 2020 Paralympic Games will influence the general public to recognize that people with disabilities are part of everyday society. They hope the events will promote a barrier-free society, and not end up being just another international event.

In fact, people with disabilities receive much support in this advanced country. Even in rural districts, roads are made of concrete and sufficiently maintained for wheelchair users, and there are tenji blocks (raised guide blocks for blind people) on many streets and railway stations. Moreover, unlike other countries, there is access to top tier wheelchairs, many designed in Japan.

Showing the Way Through the Paralympics

However, there is still room for improving public awareness and acceptance, especially in urban areas. In train stations in Tokyo, for example, I have seen people ignoring, even pushing blind people and wheelchair users away to rush into train cars many times.

The Paralympics is a big chance to help everyone realize the benefits of participation and respect in a barrier free society. Natsuko Yotsuya, director of the Sun Museum, put it this way:

To achieve a barrier-free society, we should not try to help someone perfectly. If you try to help people with disabilities perfectly, it’s nonsense to do everything. And we won’t ask for perfect help, even if it takes some effort. What is important is to compromise with and help each other realistically. That is what society is about. If people are aware of this, not only as it concerns people with disabilities, but for everyone, our society will become a better place.

It was Nakamura’s dream, but now it’s ours, too.