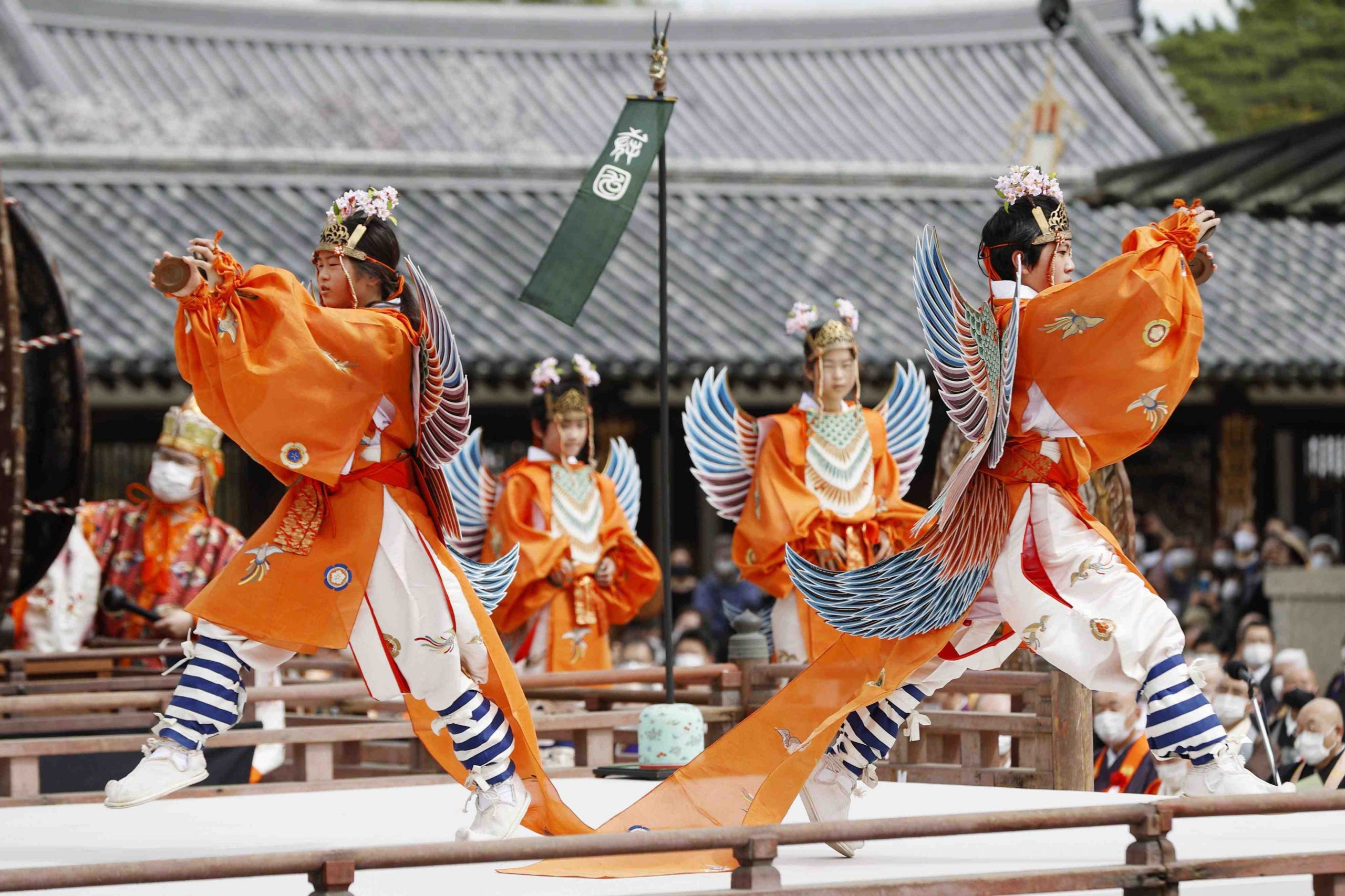 Solemn ceremonies to mark the 1,400th anniversary of the death of Prince Shotoku (574-622), one of the foremost culture heroes in Japanese history, were held April 3-5 at famed Horyuji temple. Prince Shotoku (Shotoku Taishi) was the first great patron of Buddhism in Japan.

Horyuji, located in Ikaruga, Nara Prefecture, was an early center of Japanese Buddhism and boasts the oldest wooden buildings in the world. It has been designated a UNESCO World Heritage Site.

A large number of monks, musicians and spectators were on hand for the special ceremonies held once every 100 years. Ancient music and dances lent an elegant aura to the temple precincts.

Many worshippers wearing hygienic masks could be seen with their hands together in prayer, demonstrating the depth of devotion many Japanese still have for the faith that Prince Shotoku championed.

Every Japanese remembers Prince Shotoku as one of the leading figures of the Asuka period (552-646), since his main achievements―such as instituting the 12-level rank and cap system for the imperial government and dispatching official missions to the Sui dynasty in China to bring back useful elements of continental culture―are mentioned in the textbooks they studied in school.

“Shotoku Taishi might be considered a young intellectual of the Asuka era,” says Toshikazu Iwaguchi, a staff writer at The Sankei Shimbun’s Nara Bureau who covers the temple and shrine beat in that ancient capital.

“I think he was a deep thinker who burned with idealism,” adds Iwaguchi.

He has taken that idea as the starting point for a series he is writing beginning this month for the morning edition of Sankei’s main Osaka office entitled “Ties of Wa – 1400 Years of Shotoku Taishi.”

Wa, meaning “harmony” or “peaceful teamwork,” is an essential element of Japanese society and culture. But what kind of person was Prince Shotoku actually?

Although we might think we know a lot about the famous prince, as a matter of fact we really don’t know that much about the real Shotoku Taishi. In fact, recent research has only just started to provide us with a clearer image of the man.

We must ask ourselves the following questions.

Why then, throughout the last fourteen centuries, has Prince Shotoku been revered as the member of the imperial clan who helped promote an imported religion and an eminent scholar? And why has he even become an object of worship in a “Taishi cult” that has permeated down to the level of folk religion.

Also, amidst the continuing social anxiety caused by the COVID-19 pandemic, can we find something meaningful and relevant in the legacy of Prince Shotoku?


The Reason Why Prince Shotoku is So Respected

First, who was the historical Shotoku Taishi?

According to the Nihon Shoki (“The Chronicles of Japan”), Japan’s first official history, Prince Shotoku was a son Emperor Yomei, Japan’s 31st emperor. His personal name was Umayato.

He became crown prince during the reign of his aunt, Empress Suiko, the country’s 33rd monarch. Acting as regent on her behalf, he undertook a number of important political initiatives, including instituting the 12-level rank and cap system, writing the famous 17 Article Constitution, sending emissaries to China, and promoting Buddhism despite strong nativist resistance.

In contemporary terms, we could probably say that Prince Shotoku combined the roles of politician, diplomat, thinker, and religious proselytizer.

Perhaps Prince Shotoku’s best known achievement is his framing of the 17 Article Constitution, the first article of which begins, “Harmony is to be valued and avoidance of willful opposition treasured.”

In ancient times, this became known as the “spirit of wa”, that esteemed peaceful harmony among people in society.

The prince promoted this concept because his times were not at all peaceful, with important clans in Japan constantly contending for advantage. The most powerful politician of the day, Soga Umako, even arranged to have Emperor Sushun (the 32nd emperor) assassinated.

The 35-year-long reign of Empress Suiko followed, although Prince Shotoku was still only a young boy when his aunt assumed the throne. On the Asian mainland the Sui dynasty had recently reunited China after centuries of internal disorder, while the three kingdoms of Goguryeo, Baekje and Silla were established on the Korean Peninsula. Such examples of domestic peace must have seemed appealing.

In his book Nihon no Shinro (“The Future Course for Japan”), Mitoji Yabunaka, a former Vice-Minister for Foreign Affairs, explains how Japanese foreign policy under Empress Suiko very adeptly fostered friendly ties with the three Korean kingdoms in addition to sending the official missions to the Sui court.

The continuing spread of COVID-19 in Japan has led to some less than harmonious personal interactions, and it is not uncommon to hear people arguing about whether or not they should have to wear a mask. With self-appointed “pandemic police” loudly demanding enforcement of business closures to control COVID-19 and some businesses obstinately refusing to follow public health advice, tolerance sometimes seems a quality in short supply.

Surely wa is a concept that transcends historical eras and appeals to our better nature.

It should be pointed out, however, that in many ways the life of Prince Shotoku remains an enigma. For example, a theory developed in later times that many of the stories concerning Prince Shotoku were nothing more than “fiction.”

Some research indicates that he never really was crown prince or regent or that it was a triumvirate of himself, Empress Suiko and Soga Umako who jointly controlled politics, rather than his doing so alone. All we can say with absolute certainty is that there are many unsolved puzzles related to Shotoku Taishi.

In addition, Prince Shotoku is the subject of numerous legends, such as the episode when he miraculously ascended into the sky above Mt. Fuji on his beloved black steed Kurokoma, or the story that he was the reincarnation of a famous Chinese monk.

We do know for sure that later religious leaders, such as the founder of the Tendai sect Saicho and the founder of the Jodo Shinshu (True Pure Land Buddhism) Shinran, greatly esteemed Prince Shotoku, with Shinran referring to him as the “Savior of the Kingdom of Wa.”

And the Imperial Household Agency has officially designated his tomb, as one of the Shinaga no Haka imperial tombs. This burial mound, very different in shape from earlier key-shaped kofun, is known as the Eifukuji Kita Kofun. It is to be found at the Eifukuji temple in the small town of Taishi in Osaka Prefecture. Special Buddhist ceremonies are also being carried out there through May 11.

Interestingly, a number of temples belonging to different sects which did not exist at the time that Prince Shotoku lived are carrying out special ceremonies to honor his memory, including Enryakuji on Mt. Hiei (Tendai), and the Kyoto temples Chion-in (Pure Land) and Higashi Honganji and Nishi Honganji (both True Pure Land temples). It is a testament to how much Prince Shotoku is revered in Japan’s Buddhist circles, regardless of sect.

When the last memorial celebrations were held a century ago in 1921, the great modernizing industrialist Eiichi Shibusawa was intimately involved in their staging. And a number of statues and paintings survive which show how the 700th anniversary of Prince Shotoku’s death was celebrated towards the end of the Kamakura Period.

Public honoring of the legacy of Shotoku Taishi thus has a hallowed tradition indeed. We are currently experiencing only the latest in a long line of Prince Shotoku “booms.”

(Find access to the Sankei Shimbun essay in Japanese at this link.)