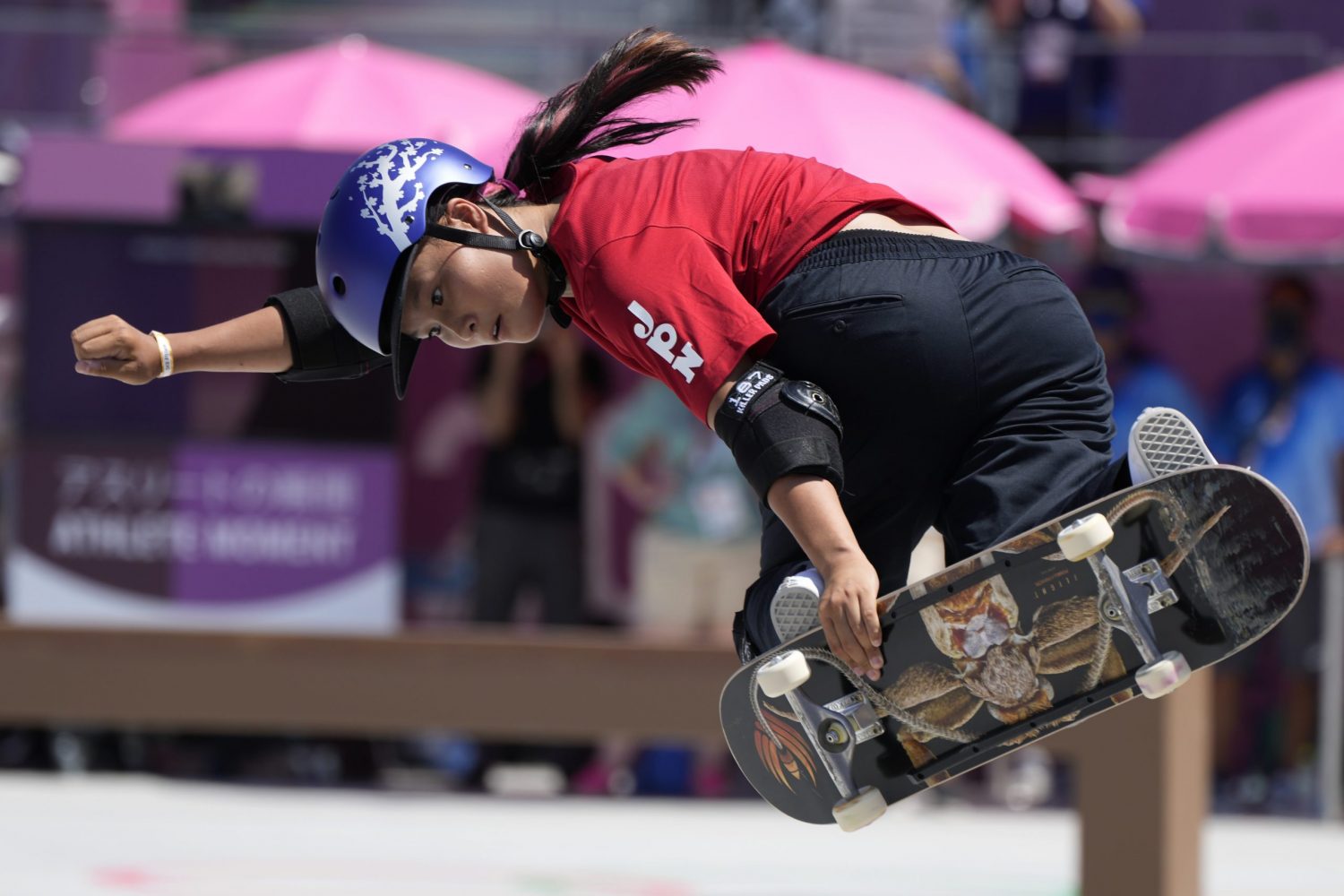 Sakura Yosozumi of Japan competes in the women's park skateboarding finals on August 4.

There are few sports that have stolen the hearts of people like skateboarding at the Tokyo Olympics, and the women’s park final at Ariake Urban Sports Park on Wednesday, August 4 was a reminder of that.

With 19-year-old Yosozumi prevailing, Hiraki at the age of 12, and Brown at 13, it was a historic podium of young women. Hiraki, who is three weeks away from her 13th birthday, became the youngest Japanese ever to win an Olympic medal.

Speaking to NHK after the competition, Yosozumi said she was happy with her work: “I am so so happy. I practiced like there was no tomorrow, so I think this affected the result.”

It was an exciting battle to the last flip and trick, where athletes turned up the heat considerably for the final. For each one, the best of three runs was chosen for the final ranking.

Wakayama resident Yosozumi ー sporting an infectious smile ー took the advantage early by grabbing first place in her first run after delivering several 540 degrees turns and scoring 60.09 points. In the latter two runs Yosozumi fell before finishing her performance. Yet, her first run had scored high enough to secure herself the top spot on the podium.

“In the last two runs I made several mistakes. Therefore, I feel that there was much more that I could do. However, I am happy that it was enough to get me this gold medal,” reflected Yosozumi.

Hiraki, with stylish white overalls and a determined countenance, used her second run to improve on her first run by one point, and scored a top 59.04 points. With her first name Kokona, after her mother’s passion for coconuts, Hiraki is also known as the “nose grinder master.” True to her nickname she perfectly executed several “nose grind” tricks, which entail sliding sideways on the top of the ramp while tipping the head of the board to the floor.

Bringing lots of smiles and energy, Miyazaki-born Sky Brown brought a surprise third run with a startling score of 56.47, pulling herself to third place.

The performance was even more moving since Brown suffered from a serious injury while practicing in California in May 2020, which saw her being taken to hospital with a fractured skull, a broken wrist, and several lacerations to her lungs and stomach. She only returned to competition in May 2021.

Brown, whose mother is Japanese and speaks a little bit of the language, commented ecstatically to NHK following the competition that her state of mind was “Sugoi! (amazing). It was great being here with Sakura and Kokona!”

Until Brown’s last run, another star Japanese athlete, Misugu Okamoto was sitting in third place. Ranked No. 1 in the world until Tokyo, Okamoto also performed several skills successfully, including an exceptionally high 540 turn, and challenged herself until the very last second to execute tricks. However, she failed to finish in all three runs, and therefore her highest score was 53.58.

Yet, the welcoming and positive skateboarding culture once again shone through, with Okamoto’s fellow finalist friends grouping around her for a hug after her last run, and carrying a dejected yet smiling Okamoto on their shoulders to the stands.

“The fact that I couldn’t conclude that last flip is something I regret,” said a frustrated Okamoto after the final. “When the Olympics were postponed, I had a tough year trying to keep the momentum going. My coach told me I was a bit lost, and I think this affected the result.”

However, at the age of just 15, the Aichi Prefecture-born skateboarder showed optimism for the future, wiping away tears. “I was really happy my friends supported me. I want to work hard so that I can be the skateboarder that everyone admires and aspires to be.”

Gold medalist Yosozumi Sakura had said prior to the competition, playing on words, that her aim was to have cherry blossoms bloom in summer (sakura means cherry blossom in Japanese). And it appears that she has achieved this stunning feat, in yet another page of history for Japanese skateboarding.

Skateboarding debuted as a sport in the Tokyo Olympics. Yuto Horigome and Momiji Nishiya had previously captured gold medals for Japan in the men’s (July 25) and women’s (July 26) street skateboarding finals.

The men’s park skateboarding final will take place on Thursday, August 5, at 12:30 p.m.