[Speaking Out] Involve Europe in the Indo-Pacific Strategy 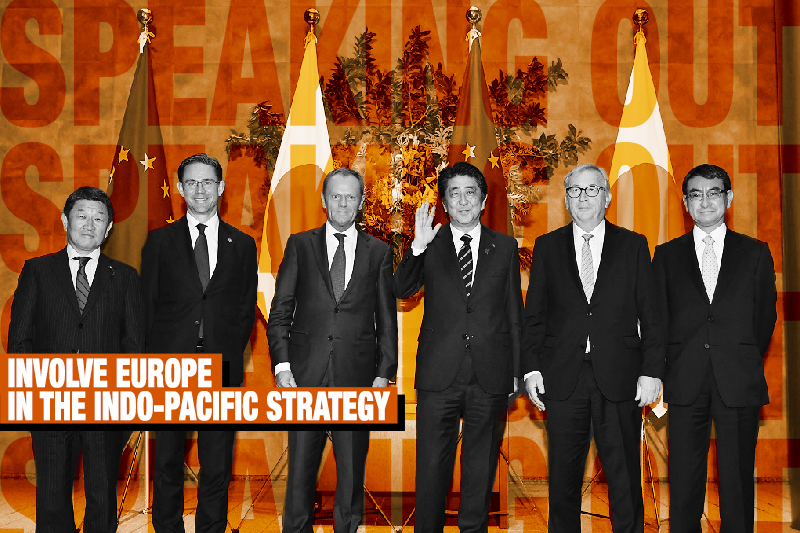 Is Chinese President Xi Jinping a national salvation leader or an oppressive dictator?

Xi clearly attempted to position himself as the former when China’s National People’s Congress (NPC) convened on May 22. But the international community has critically viewed him as the latter, with the coronavirus pandemic originating from Wuhan, China.

The Xi regime has particularly angered major Western countries as it initially covered up the virus outbreak, allowing the disease to spread around the world. And, worse still, it pretended to do a favor to other countries through Chinese “medical support,” instead of apologizing to the world.

The United States has begun to irreversibly decouple its supply chains from China. Japan, together with the U.S., has a strategic opportunity to reconstitute a new Indo-Pacific strategy involving Europe, which is remarkably breaking away from China as a consequence of the current coronavirus crisis.

In his speech at the May 18 opening ceremony of the first annual assembly of the World Health Organization (WHO) since the coronavirus pandemic outbreak, President Xi admired his government for having given priority to people and their lives, and for having “an open, transparent and responsible attitude,” calling for building “a global community of health for all.” The speech, deviating far from the facts, might have been taken as a black joke by countries aware that China had dispersed the virus throughout the world and then conducted so-called “mask diplomacy,” providing poor-quality medical supplies to countries victimized by the virus.

The Xi speech included no word of apology for allowing the coronavirus infection to spread. At the same time, the WHO, despite being criticized as favoring China, nevertheless tolerated China’s unilateral admiration of itself.

A resolution calling for an independent investigation into the origin of the coronavirus was unanimously adopted, as proposed by Japan, Australia, and the European Union. The support of 120 countries for the resolution might have dealt a severe blow to China. However, China may try to delay the investigation process through politics over how to organize the investigation team. China could also repeatedly request revisions to any report in a bid to water down its content.

Severe damage by the Wuhan coronavirus to the Chinese economy has been demonstrated by Beijing’s failure to provide an economic growth outlook at the NPC. President Xi will be likely to adopt a foreign policy hardline to divert domestic anxiety towards the Chinese Communist Party on its centennial anniversary in 2021. Also coming up is the next quinquennial CCP (Chinese Communist Party) Congress in 2022.

The Xi regime came up with an annual defense spending increase of 6.6% at the NPC, close to the 7.5% in the previous year. Starting with measures to exacerbate the suppression in Hong Kong, President Xi may increase military pressure on Taiwan and in the South and East China Seas, while enhancing domestic oppression.

Japan, on the front line of deterrence to China, is positioned to lead regional security as coordinator for the “Quad-plus” Indo-Pacific cooperation framework. This is an expanded version of the Japan-U.S.-Australia-India quadrilateral cooperation, which has the Free and Open Indo-Pacific vision at its core.

In order to improve its effectiveness, Japan must persuade Europe, as well as Vietnam, Taiwan, and Indonesia, to join the Quad countries to build a new Indo-Pacific framework to deter China.

(A version of this article was first published by the Japan Institute for National Fundamentals, Speaking Out #682, on May 28, 2020.)