[Speaking Out] Japan Needs to Become a Great Power Again, 75 Years After the War 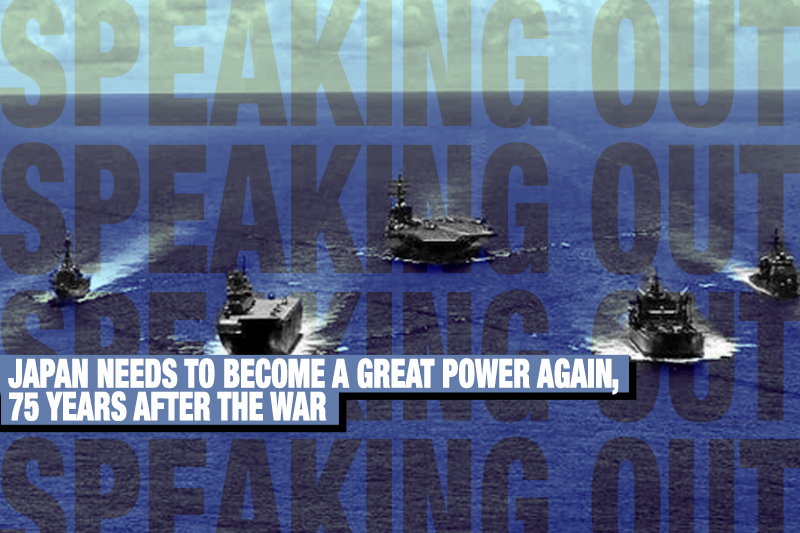 In 1853 Commodore Perry visited Japan with a complaint. Japan was not a great power which threatened the U.S. Navy, but as the ranges of sailing ships increased owing to technological advances, isolated Tokugawa Japan either refused assistance to shipwrecked vessels or sometimes killed the crews.

Perry delivered a letter from the U.S. president demanding that Japan open itself to vessels in distress. Impressed by the might of Perry’s ships, a new government took power in Japan and the mislabeled Meiji Restoration quickly grew Japan into a powerful nation.

Cognizant of the vulnerability of the Japanese islands to an adversary-dominated Korean peninsula, Japan went to war against China in 1894. And when Russian influence in Korea became unacceptable in 1904, Japan went to war again. U.S. President Theodore Roosevelt was so impressed with Japan that he hosted the peace conference in Portsmouth, New Hampshire. From that point on, Roosevelt ordered the U.S. Navy to monitor Japanese military prowess.

First Comeback Since the Battle of Midway

Japan’s great power was destroyed by 1945, but the 75 years since have been mostly stable because the U.S.A’s military strength has not been seriously challenged. The Soviet Union’s power threatened the last three  decades of the Cold War, but fell back owing to the collapse of the Russian economy.

The post-Cold War period seemed very stable at the outset owing to the overwhelming capabilities of the United States. But in the last three decades, the U.S. failed to carefully monitor China’s military buildup, and even allowed American companies to sell highly sensitive technology to China. This has resulted in the U.S. finding itself outnumbered, outranged and outgunned by the Chinese military, especially in the East and South China Seas critical to its ownーand Japan’s security.

Finally the Trump administration is reorienting the U.S. military to the Western Pacific, and the Commandant of the U.S. Marine Corps has just outlined a ten year plan to do so. Marines will be land-based along parts of the First Island Chain, which includes Okinawa, the Nansei Shoto and Taiwan.

As presently operated, neither Japan nor the United States alone can sufficiently deter China’s threats to the Indo-Pacific region. But integrated Japanese and American land, sea and air power, hopefully in cooperation with Australia and India as well, can prevent China from becoming a dominant military hegemon.

Rather than say Japan needs to support the U.S. I prefer to say that Japan and the U.S. need to jointly implement a grand strategy integrating land, sea and air based forces operated from a combined U.S.-Japan command headquarters. To succeed Japan needs to become more than a junior partner, but must for the first time since the Battle of Midway become a great power to ensure the continuation of peace and security.

Japan doesn’t need huge increases in military power or its number of bases, but Japan’s political leaders must empower Japan’s Self Defense Forces to operate powerfully, quickly and reliably. Waiting for Diet notification and severe limitations of operational flexibility will insure failure.

A combined Japanese and American defense grand strategy will not compromise Japanese or American sovereignty and will be compatible with Japan’s right of collective self-defense. But a coordinated, flexible, high technology combination of the two great powers can foil China’s attempt to take control of Taiwan and the East and South China Seas.

(A version of this article was first published by the Japan Institute for National Fundamentals, Speaking Out #707 (Special Contribution) on August 11, 2020.)