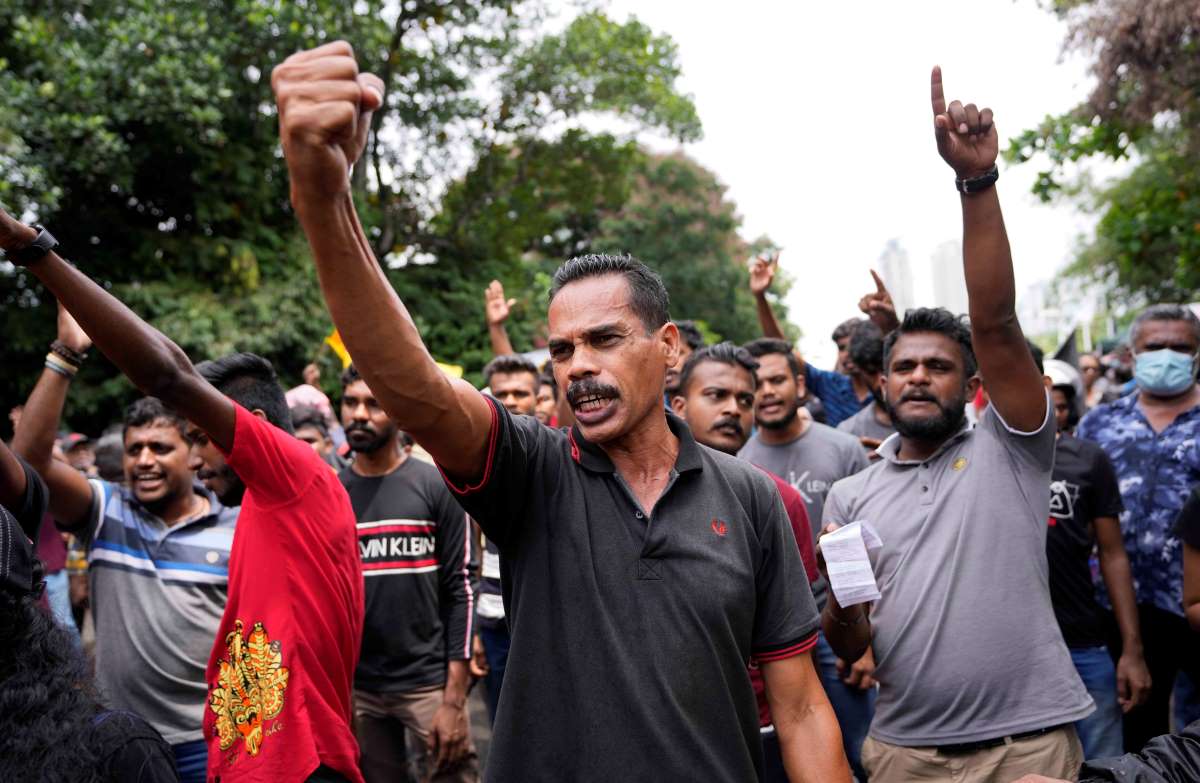 Sri Lankans protest demanding the resignation of the government in Colombo, Sri Lanka, Friday, May 6, 2022. Protesters have continued nationwide demonstrations against the government over its alleged inability to resolve the worst economic crisis in decades. (AP Photo/Eranga Jayawardena)

Sri Lanka’s caretaker Prime Minister Ranil Wickremesinghe has declared his country “bankrupt.” Meanwhile, the resignation of President Gotabaya Rajapaksa, who is in hiding at the moment, is anticipated on 13 July.

Wickremesinghe has also agreed to step down, it has been reported, thus paving way for an all-party unity government to be constituted to run the embattled island nation.

Rajapaksa had been facing months of sustained protests calling for him to step down from power, with the popular protest slogan ‘#GoHomeGota’ gaining massive ground. He repeatedly declined.

Ultimately, public outrage culminated with the recent takeover and ransacking of the presidential palace, official and private residences, and offices. Extensive media footage of unending throngs of people swarming and overtaking these properties will remain etched in the public memory as a symbol of civic anger and outrage against the apathy of the Rajapaksa clan’s policies and governance.

The political and fiscal bungling by the Rajapaksa administration was multiplied further by the plaguing debts with China, and beyond those by the COVID pandemic. The combination is behind the devastating ongoing economic situation facing the island nation.

Colombo’s economy has been faltering since 2020. The raging and uncontrollable inflation is expected to hit a record 70% in the coming months of 2022, as food prices skyrocket and government coffers run dry.

Further, the energy crisis has led to continuing blackouts.

In all, Sri Lanka is in the midst of a hounding humanitarian crisis with the government already having defaulted on $51 billion USD of foreign debt. It can no longer afford to import fuel, food, and medicines. Economic woes are showing no sign of relenting with multiple incoming warnings of a worsening fuel and food shortages situation.

Ushering In a Food Crisis

The Rajapaksa clan led by the three brothers, Basil, Gotabaya, and Mahinda, has been accused of corruption and financial mismanagement of the island nation’s affairs, which eventually ked to the worst economic crisis since Lanka’s independence in 1948.

Moreover, the Lankan public has blamed the erratic and unreflective policies of the Rajapaksa administration for its food shortage. The unperceptive and sudden ban by Gotabaya Rajapaksa on all chemical fertilizers across Sri Lanka in May 2021 directly resulted in momentous drops in agricultural yields. The ban was imposed virtually overnight with no prior warning or training, rendering the farming community furiously helpless.

Even though the ban was rolled back following widespread protests, it caused equally widespread damage, which became unmanageable. In the end it led to a 30 % drop in annual paddy yields nationwide in 2021.

Food shortages in turn have sparked massive public protests. In fact, food inflation in Sri Lanka has reached a jaw-dropping 80%, resulting in a majority population only able to afford eating one meal a day.

Many Steps to an International Response

While a team of International Monetary Fund (IMF) officials visited Colombo in June 2022 to hold discussions with Lankan officials on economic reforms and policies that could be supported by an IMF Extended Fund Facility arrangement, it all seems to hinge on what kind of debt restructuring and sustainability plan Sri Lanka will submit to the IMF.

Moreover, an agreement on a comprehensive loan assistance program can only be considered following a repair and recovery plan of Sri Lanka’s runaway fiscal deficit.

Most importantly, IMF negotiations for a fiscal rescue package can begin only after a resolution to the current political crisis – thereby underscoring its vitality.

Approach by India and Japan

Additionally, Sri Lanka is in talks with India and Japan, among others, to form an aid consortium. This should be an opportunity for Tokyo and New Delhi to ensure that a debt trap crisis in Colombo does not get repeated.

In fact, India has been doing most of the heavy lifting, providing $3.5 billion USD of support via fuel supplies, credit lines for essentials, and loan deferments.

I had argued in my previous JAPAN Forward column that it is not just about Sri Lanka suddenly beginning to matter. More to the point, the case of Sri Lanka’s political and economic collapse in South Asia has now come out in the open for the world to see.

There is fear as well that Colombo’s defaults and ultimate collapse could well be the start of a wider financial crisis regionally in South Asia, and perhaps more broadly across the developing world. The effect of this financial emergency could cascade in political and security crises across regions of debt-ridden countries, many of which suffer from coercive debt, with China most often appearing as a common predatory creditor.

Having a pliant political regime in the target country is fast becoming a prerequisite for China as it seeks to engage that particular nation, offering an alternative political model, a communist one,  while encouraging it away from democratic norms. It is a potentially catastrophic proposition that needs to be gridlocked.