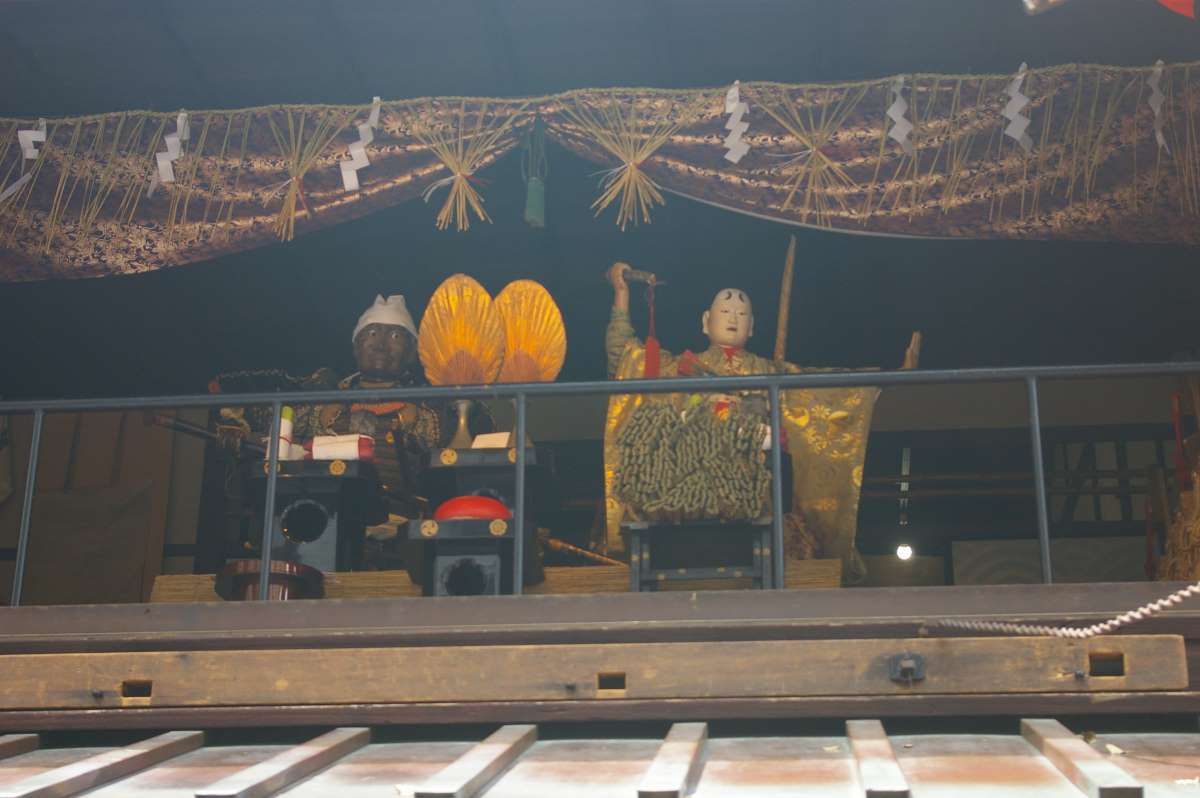 Festival floats of the Gion Matsuri with dolls (July 2022, photo by John Carroll)

Seventh in a series

The Kuze Komagata Chigo of the Gion Matsuri are traditionally sent by the Kuze Ayato Kunaka Jinja. In the past, the area where the shrine is located, then known as Kami Kuze, was quite rural. But in this era it is very much part of the Kyoto urban landscape.

Recently I paid a visit to this rather small, nondescript shrine only yards away from the elevated Tokaido Shinkansen railroad line. The shrine precincts were deserted; not even a stray cat to be seen. And were it not for the fact that it was near a major road, I suspect that at night a rather forlorn atmosphere would pervade the shrine.

At the same time, I would not say it gives off any threatening vibes. Except for a couple of tiny figurines resembling Taoist sages snugly ensconced in the hollow of a tree trunk that looked like it had been hit by lighting, and the presence of three separate torii gateways, this jinja seemed like one of the thousands of local shrines throughout Japan. Just from its appearance there is no way to guess that it has such historical importance.

According toProfessor Masahiko Kawahara’s May 1962 article in the journal Bunkashi Kenkyu (Cultural History Research), which described the situation as it was in the early 1960s, traditionally a chigo was chosen from the young children of shrine parishioners (ujiko).

Actually, a family was designated by lot. If they did not have any young offspring of the appropriate age, then a relative or young boy from outside the village could be substituted.


Day Long Preparations for the Procession

On the morning of July 17, just about the time that the Yamahoko Junko was about to start, preparations for the big day would commence in Kuze.

The carved horse’s head or goshinta — “Okoma-san” to the residents of Kuze — would be carried in a special karabitsu wooden chest to the home of that year’s chigo, where it would be placed in the tokonoma home alcove. (Prior to World War II, one chigo led both the procession to and from the otabisho. I assume the house referred to here is that of the chigo leading the procession from Yasaka Shrine to the otabisho.)

There the chigo would change into his special costume and undergo ritual purification by the shrine priests. When complete, the child, his father and the priests would go together to the shrine to pray.

Then the chigo, his father, the priests and local dignitaries boarded a minibus for the trip central Kyoto, bringing the wooden chest holding the goshintai with them.

In accordance with tradition, they would head to the Hararyokaku in the Gion district, which was to serve as a nakayado or “temporary place of rest.” This venerable shop selling Kyoto-style spices was founded in 1703 (Genroku 16) and is still operating today.

There, as the party rested, for the first time the goshintai would be removed from the wooden chest and placed on an altar beneath a hanging scroll which read “Gion Gozu Tenno.”

At around 3:30 PM, as the yama and hoko that had appeared in the morning parade were being dismantled, the goshintai would be hung around the neck of the chigo so as to rest on his chest.

The party would then set off for Yasaka Shrine with the chigo riding on a white horse led by his father. After entering the shrine precincts, the mounted chigo would go around the honden (main sanctuary) three times.

After the mystical ritual uniting the two mitama of Susano-no-Mikoto (Gozu Tenno) was completed, and the three Yasaka Shrine kami were transferred to the mikoshi, the Shinkosai procession would form. The chigo would not be in the very front of the procession. Traditionally he was preceded by “samurai” bodyguards, musicians, the karabitsu, as well as priests from the Ayato Kunaka Shrine and village officials from Kuze.

Similar groups would precede the other two mikoshi.

Incidentally, there are several reasons why mikoshi bearers might shake or bounce a portable shrine up and down, including energizing or amusing the kami.

Also, since many festivals are held annually, this can be viewed as part of a process of rebirth and renewal. During medieval times, typically not just anyone was allowed to carry a mikoshi. Only individuals belonging to certain groups could do so, and that is largely true today for the Gion Matsuri.

The ornate, six-sided, mikoshi, each with a phoenix on top present a riot of vermillion and gold colors. The three mikoshi follow three different routes to the otabisho, their progress timed so that the Naka Goza mikoshi will reach there first.

The chigo accompanies the Naka Goza mikoshi. And not long before reaching their destination, when they come to the front of the Kyoto Daijingu shrine, “Okoma-san” is removed from his chest and returned to the karabitsu, where it will remain until the older chigo from Kuze dons it for the return to Yasaka Shrine on July 24.

Legend of the White Horse

Originally there was Oi Jinja, said to have been founded in 521, where the god of the Katsura (Oi) River was worshiped. Its name was changed to the Ayato Jinja in 955.

Then there was the Kunaka Jinja, whose founding date is unclear. It is said that Gozu Tenno was long worshiped at that shrine.

During the Sengoku period the two shrines were consolidated and since have been relocated more than once, eventually ending up in the current location.

It is not clear when the Kuze Komagata Chigo became an integral part of the Gion Matsuri, although there are mentions of them at least three centuries ago.

According to a local legend, in the age of the gods, Susanoo-no-Mikoto descended on a horse near the site of the original Kunaka Shrine. He parted the waters and reclaimed a wide plain for cultivation.

He then made an image to represent the head of his favorite horse and left it as a symbol of his mitama before heading across the sea to the kingdom of Silla. That image became the original komagata.

It should be noted that Susanoo is closely associated with the rice plant and agriculture, which were thought to have been brought from the continent. Despite this tradition, even the locals are not sure whether the story was originally connected to the Kunaka Shrine or the Ayato Shrine. However, the banners reading Kunaka Jinja are carried in the Mikoshi Togyo processions.

The Kuze Komagata Chigo tradition remains very much an enigma. Even the shrine elders have been unable to unravel its origins. Not only do we not know where it came from, we cannot explain its true spiritual significance.

From ancient times, horses, especially white horses, were highly revered in Japan, and it was believed that sometimes kami arrived on horseback. Although small horses had existed in Japan during the Jomon period, it appears that domesticated horses for riding and warfare were introduced from the Korean Peninsula during the Kofun period.

Many haniwa clay sculptures of horses have been discovered within or around the great imperial burial mounds. Horse racing was also a part of religious observances at the Kamigamo Shrine in what is now northern Kyoto as well as the Gion Goryo-e.

It appears therefore that a horse cult flourished in the district in which Kyoto is located. Immigrants from the Korean Peninsula, many of whom settled in this region, were often associated with horse riding, as well as disease-bearing deities, including Gozu Tenno.

It is also interesting that on the return procession of July 24, the Naka Goza mikoshi makes a stop at Shinsen-en where Heiankyo’s first goryo-e was held. Here priests from Yasaka Shrine and Buddhist priests from the Toji temple respectively conduct Shinto and Buddhist rites.

This visit might be an indication that the Kuze Chigo custom is very, very old.

Late at night on July 24 the procession of mikoshi brings the three kami back to Yasaka Shrine, with the Naka Goza mikoshi arriving first. The bearers make three clockwise circuits of the maidono kagura dance stage before putting it down.

Soon all three mikoshi are lined up together for solemn rituals. It is now past 11:00 p.m.

At around midnight, the main south gate to the shrine is shut and all lights in the shrine precinct are extinguished. It is pitch black and time for the solemn mitama utsushi (“soul transfer”) rite.

As notes from a wagon zither rupture the silence, a disembodied voice announces from the dark that the ceremony is about to begin. The mystical transfer of the mitama commences.

Next: The Gion Matsuri: A Unique Mid-Summer Street Celebration