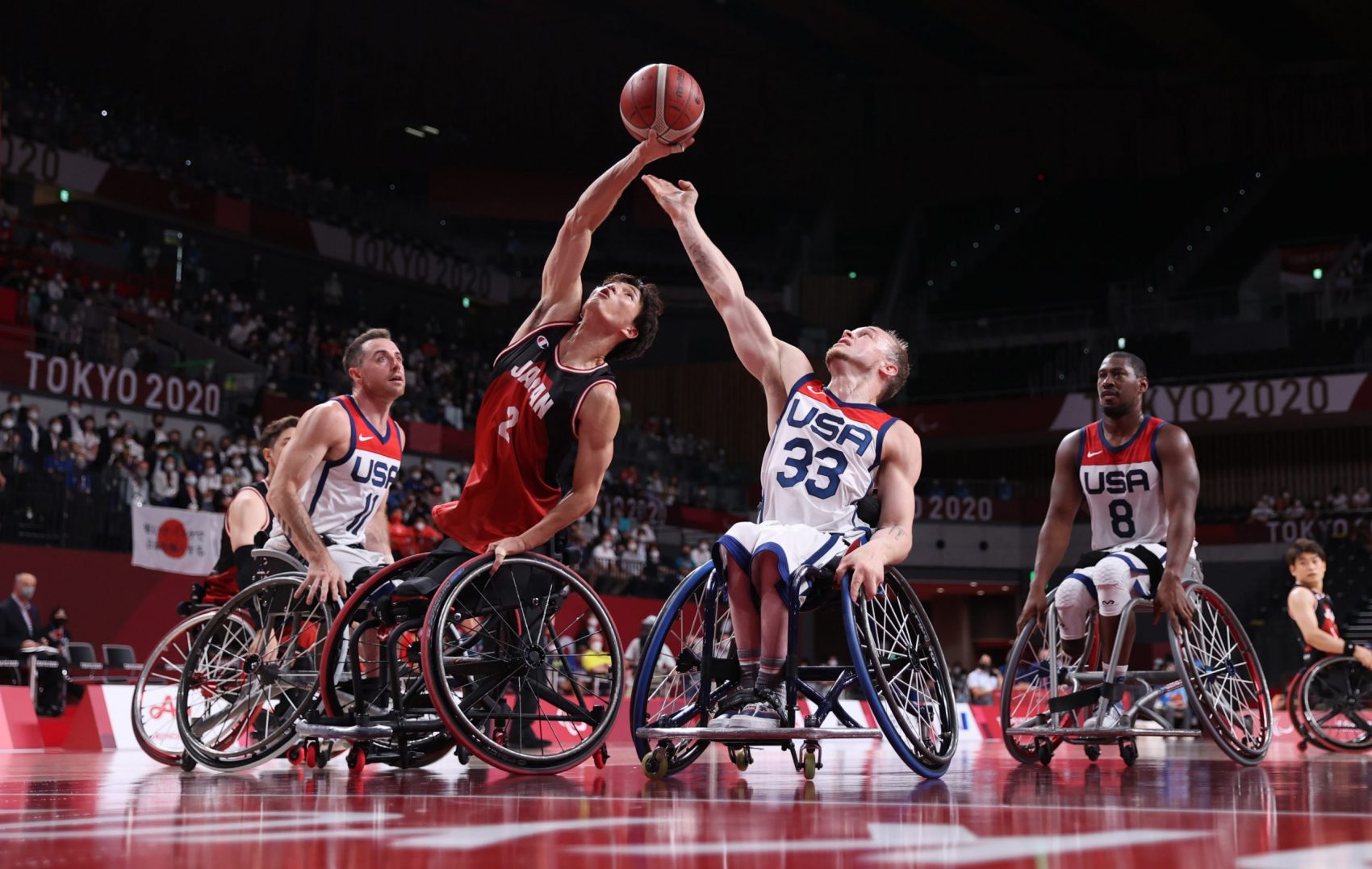 Japan's Renshi Chokai and John Boie of the United States compete in the fourth quarter of the wheelchair basketball men's final on September 5 at Ariake Arena.

The United States erased a five-point deficit over the final five minutes to edge Japan 64-60 on Sunday, September 5 and defend its title in wheelchair basketball on the final day of the Tokyo Paralympics.

Renshi Chokai gave Japan a 56-51 lead with just over five minutes left, boosting hopes for a historic win for the host nation, but the U.S. came storming back.

Trevon Jenifer started the comeback with a 2-pointer and Brian Bell made it a one-point game after taking advantage of a turnover by Takuya Furusawa.

Jacob Williams then scored two consecutive baskets to give the defending champions a 59-56 lead with 4:14 left.

Steve Serio nailed an inside shot, courtesy of a pass from Bell, to make it 61-58 with 49 seconds remaining. Serio made three free throws to finish with a team-high 28 points for the Americans, who also won the gold medal at the Rio Games in 2016.

Japan settled for silver, becoming the first Asian nation to win a medal in wheelchair basketball.

“Japan was the Cinderella story of this tournament,” Serio said. “But you couldn’t ask for a more storybook ending for us. We were up against a great team, in their home country, their home stadium, and we had a performance like this.”

Things started well for Japan as it jumped out to an early 8-0 lead in the first quarter at Ariake Arena.

But the U.S. battled back and the two teams finished tied at 18 when Williams hit a 3-pointer in the final second of the first quarter.

While the U.S. outplayed Japan in the second quarter, scoring 14-points to put a five-point buffer between themselves and the hosts, the third quarter was a different story.

Japan dominated the third frame and took a slim 46-45 lead into the final 10-minute period.

Japan had chances to come back in the final minute but missed shots and precise free throws from Serio sealed the win for the Americans.

“This team is just so resilient,” Serio said. “We’ve been waiting five years for this opportunity, even since Rio. With everything that’s gone on in the last 18 months we knew it was going to be a challenge. We’ve stuck together from Day 1 and we believe in each other.”

One telling stat was the U.S. scored 18 points from turnovers compared to one for Japan.

Still, it was an impressive result for Japan, which went 4-1 in Group A in the preliminary round and then beat Australia in the quarterfinals and Great Britain in the semifinals.

Hiroaki Kozai led Japan with 18 points and Reo Fujimoto chipped in with 11. Chokai finished with eight and a game-high 18 rebounds.

After two tight quarters, Great Britain ran away with it in the third, scoring 22 points to Spain’s 10 to take a 10-point lead into the final quarter.

“This bronze medal is for everyone else,” said Great Britain’s player-coach Gaz Choudhry. “We know where we were, but now we’ve won it, it definitely feels more than bronze.”

On Saturday, September 4, the U.S women’s wheelchair basketball squad won bronze with a 64-51 win over Germany.

“It feels amazing to be bringing home a bronze medal,” said Darlene Hunter, Team USA co-captain. “I know everybody wants the gold but when you can’t get in a gold medal game, the next best thing is to finish it and get the medal. Especially with nine rookies on our team, everybody doubted us. We came in and just showed that we’re here.”