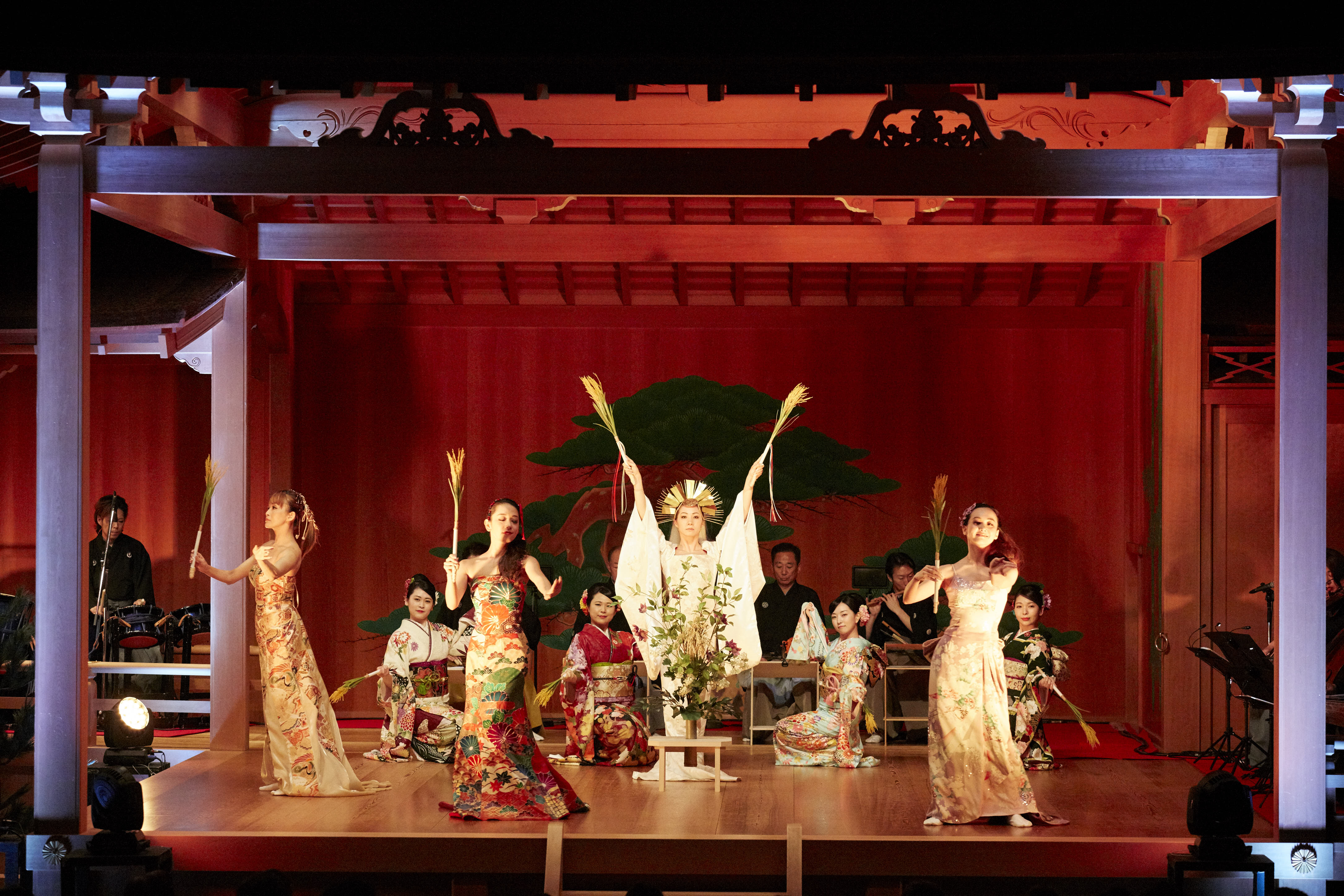 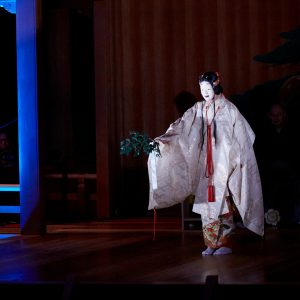 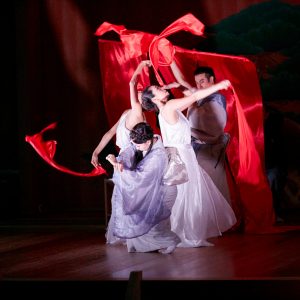 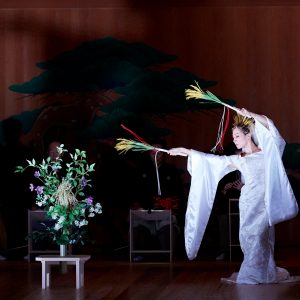 With deeply established traditions in dance, theater and music, Japanese entertainment offers almost too much to keep track of.

But what happens when you mix these performance arts in a modern way?

On May 13 and 14, the performance A Seed: Ichi-Ryu Manbai is set to take place at the Kanze Noh Theater inside GINZA SIX, a fashion center in the heart of Tokyo.

The story is inspired by Japanese mythology, and its presentation encompasses theatrical arts, such as Noh, kyogen, and kabuki, as well as traditions like Japanese flower arrangement. It tells a legend of the beginning of the universe.

The style, however, has a little twist. Using the trendy idea of East meets West, the performance includes aspects of contemporary music and dance. A cello and violin are part of the music ensemble, and ballroom dancers stand side by side with kabuki performers.

The title Ichi-Ryu Manbai encapsulates the meaning that a single seed can eventually produce millions of grains of rice and a great harvest.

It is a project that started in 2015 from the ambition of Yasushi Matsuura to broadcast Japan’s charm to the world. The show came to GINZA SIX for the first time in 2018. Thanks to positive reviews, it’s back for more.

As Matsuura explained, “We got incredibly good reviews last year, bringing us to continue the show this year.”

As the new imperial era began in Japan on May 1, the time seemed ripe for a performance showcasing the best of modern and traditional Japan.

Even an ambitious project sometimes just needs one person to be the driving force. In this case, that person is Yasushi Matsuura. Born and raised in Japan, he headed to the United States in 1988 to study Motion Picture and Directing under the University of California-Los Angeles (UCLA) Extension Program.

After breaking into the music video industry by winning an award for best music video director at the California Country Music Association, he burst into the TV commercial scene. His clients include Toyota, Honda, Sony, and Suzuki, just to name a few.

But, clearly, the fame of the projects he was pursuing wasn’t enough to satisfy Matsuura — he wanted to do more to showcase Japanese culture to the world. As he explained in his April press release:

“To make people understand Japan means to communicate culture, and the story which is at the background of this culture. This stage is an excuse to pass the Japanese tradition to the next generation. But, also, I want this performance to be a means for people from all over the world to gain more understanding about Japan.”

Talking to Matsuura, it’s clear that he is very passionate about communicating the meaning of the “Japanese spirit”: “I think that the Japanese spirit is one which shows gratitude for things around it. Our ancestors felt the presence of the kami (loosely translated as divinity) in different things, such as the branch of a tree, stones, and chopsticks. It was a process which I think elevated them.”

The project started in October 2015 with a performance in Tokyo’s Sumida Ward at a venue which held a mere 120 people. Over the years the project grew. In 2018, nearly 2,000 guests came to the Kanze Noh Theater.

By putting together elements of the East and West, the innovative performance wows the senses both visually and musically. While the melodies of a cello and a violin can be heard, so can the notes played by the taiko drums and the koto.

The two siblings grew up surrounded by performing arts. They are the descendants of Ichikawa Enou, the kabuki actor who is commonly remembered as one of the founders of Super Kabuki. This refers to the trend to make kabuki more accessible through the use of modern Japanese language and a more current touch.

Joining the two renowned artists in the world of traditional Japanese dance are Tatsuya Hatta, who has received the accolade of Important Intangible Cultural Property, and Shigeyoshimi Hanayagi from the Hanayagi School of Japanese dance.

To give it a modern flavor, the four traditional dancers will perform together with four ballroom dancers: Nozomi Matsumoto, Erika Nakamura, Nana Somata, and Yoshimi Higo.

Both groups of dancers made clear that it wasn’t always so easy to mix the different genres.

Matsumoto, one of the ballroom dancers, commented on the differences by mentioning the footwear. He explained: “This is the third time I participate, so compared to the first time I have gotten used to it. But initially it was quite difficult because the way the tabi slide compared to heels is quite different.”

For many dancers and musicians, it was also their first time performing in a setting which mixes Japanese and Western elements, like in the case of cellist Masanori Taniguchi. “It was the first time [I am] collaborating with Japanese performance,” he explained.

Takahiko Fujima elaborated: “For both us (me and my sister) it’s the first time performing with people from different genres, so, while experimenting, everybody has been really helpful in practicing together in a fun way.”

The dancer, however, also stressed the importance of bringing tradition to a new frontier, as he continued: “We want to perform in new setting while maintaining the essence of traditional kabuki dance.”

Saburo Mochizuki, a veteran performer of Noh drum kozutsumi, also explained how he thinks that expanding into other sectors is key. “Noh musical instruments expanded into kabuki. I think expanding to this kind of performance also is essential.”

A Chance to Learn About Japanese Culture

During the press preview on April 11, it was clear that the performance seeks to be a learning opportunity for Japanese and foreigners alike.

Musicians took the time to explain how their instruments worked. For example, Yumiko Shigekusa told the audience about her instrument, the otsuzumi. She showed the audience how a tool made out of solidified washi paper (which looks much like a thimble) achieved a sharp tapping sound when hitting the surface of the handheld drum.

Saburo Mochizuki demonstrated how the cords at the side of a kotsuzumi — the smaller hand held drum — cause the drum to produce a different sound if they are pulled or released.

In this way, the performance is creating an opportunity to spread knowledge about Japan to everyone. Regarding the future, Yasushi Matsuura explained his wish: “A seed will grow into millions and pass its spirit on the next generation.”

There are three performances over two days, May 13 (7 P.M.) and 14 (noon and 7 P.M.), only. Tickets range from ￥4,000 JPY to ￥12,000 JPY, prices that make it affordable for everyone to enjoy. Click here for more information on tickets and the performance, or contact directly with the choice of day and time at this email address: ichiryumanbai.office@gmail.com.

There are more events expected to be announced later in the year, so make sure to check back here periodically for more information.