We conclude our 3-part series based on a panel discussion with two top-ranking members of the Japan Self-Defense Forces and journalists from the Sankei Shimbun and JAPAN Forward.

Yoji Koda, a retired vice admiral with the Japanese Maritime Self-Defense Force and a fellow at the Fairbank Center for Chinese Studies at Harvard, and Kunio Orita, the former head of the Air Self-Defense Force’s Air Support Command and a lecturer at Toyo Gakuen University, discuss what Japan, the United States, and South Korea could realistically do should war break out on the Korean peninsula.

What are the possibilities of war against North Korea? Kunio Orita, former head of the Air Self-Defense Force’s Air Support Command, has this to say: a strike against the DPRK will be nothing like the 59 cruise missiles the United States launched into Syria in response to Bashar al-Assad’s alleged use of chemical weapons in April of 2017.

At Okehazama in June of 1560, a vastly outnumbered Oda Nobunaga outmaneuvered and launched a surprise offensive against Imagawa Yoshimoto, who was caught completely off guard by Oda’s stealth strike.

According to both Koda and Orita, any American offensive against the DPRK would be a Nagashino-style attack. There would likely be no secret incursions and targeted killings of key leaders. Instead, the Americans would likely use every means at their disposal to reduce the North’s military capabilities in toto. They will be making methodical preparations and aiming for the elimination of the North’s ability to wage war, and not just for the end of the North’s current ruling clique.

How Will We Know War is Imminent?

This full-scale war will require extraordinarily complex advance planning. While the United States will surely attempt to keep secret as many of its operations as possible, some telltale signs are likely to indicate that war may be approaching.

According to Orita, one such sign would be non-combatant evacuation operations (NEO). There are some 250,000 American non-combatants in the Seoul area, and moving these people out of harm’s way would be a clear indication that the United States was taking concrete steps towards military action.

Orita said that, unlike Winston Churchill, who sacrificed thousands of innocent British lives at Coventry in order to avoid revealing that England had captured a German Enigma code machine, US Defense Secretary James Mattis would take every possible precaution to protect American lives in South Korea.

Next would come increases in troop strength and hardware deployment, Orita said. There would be a need to assemble, for example, the many different kinds of aircraft that would be needed for an attack.

According to Orita, the best troops in the US are in the reserves, because they are mostly veterans. Calling up members of the reserves would be a signal that an attack was in the offing, just as it had been before previous actions in the Middle East.

Finally, there would be logistics movements, such as the forward delivery of ammunition and supplies.

Just before the fighting started, there would be what Orita calls an “information blackout.”

“For two weeks before the attack, there will be no information released, nothing transmitted. ‘We’re attacking!’ is what the diplomats say,” Orita pointed out. The military, by contrast, goes completely silent before a strike.

What Will Japan’s Role Be?

Koda pointed out that the US would be unlikely to share any information with Japan ahead of an attack, even though the two are allied countries. This is because the US would be attacking North Korea independently, and would not be operating within the collective defense framework with Japan.

“Unlike NATO, where an attack on one is an attack on all—which would lead to the US fighting in tandem alongside the Japan Self-Defense Forces—any war with North Korea would be completely different, something unforeseen under the joint security system, which envisions only scenarios in which the United States is under attack,” Koda said. “Therefore, because such a development is unlikely, it is equally unlikely that the JSDF will be deployed.”

Koda added that, under the Japan-US and South Korea-US alliances, South Korea would play the secondary role of protecting the 38th parallel from invasion by the North, while Japan would likewise protect the Japanese islands while also supplying and supporting American forces.

Taken altogether, Koda said, “there are actually three operations that would play out: the war conducted independently by the US against North Korea, the joint US-South Korean defense of South Korea, and the JSDF’s protection of Japan and Japan’s supplying and supporting the American military forces.”

He continued: “These three frameworks coming into play all at the same time may perhaps be the most unprecedentedly complicated battle fighting arrangement in human history. If we don’t understand and anticipate this, then we are likely to be unable to deal with what is coming.”

“However,” Koda remarked, “there’s the ‘Donald-Shinzo’ relationship to consider. It may be that Trump tells Abe personally that the US is going to attack North Korea on such and such date. In that case, though, such information sharing would be outside of the alliance framework.”

When asked about the abduction issue, with North Korea having kidnapped possibly more than 800 Japanese nationals, Koda said that the question came down to whether North Korea could be trusted.

“In 1994, then-President Bill Clinton was outsmarted by Kim Jong-il. The US provided North Korea with two light-water nuclear reactors—which don’t produce weapons-grade radioactive materials—for free, along with five million tons of oil a year. It was a remarkably generous present. But the North Koreans refused to allow inspectors into their country as they had promised, and they secretly carried on with forbidden programs,” Koda said.

For Koda, this is just one proof that the DPRK does not abide by its commitments. There’s another: the North failed to keep any of the promises made to then-Prime Minister Junichiro Koizumi during his visit to Pyongyang in 2001, when he was able to secure the release of five abductees. It will be very difficult to negotiate with such a country, whether over the abduction issue or anything else.

Both Koda and Orita were skeptical about the possibility of Japan’s using military force to recover Takeshima, which is currently illegally occupied by a small contingent of South Korean military forces as part of the “Syngman Rhee Line” from the 1950s.

“Recovering Takeshima may be possible if South Korea were utterly ruined by the Second Korean War,” Orita said. “But otherwise making an enemy out of South Korea over Takeshima is probably not a realistic course of action.”

Koda agreed that Japan was committed to resolving the Takeshima issue using non-military means. The preference was for patient strategizing, Koda said, such as when Oda Nobunaga married his son off to the daughter of a hated enemy. Whether Takeshima or the Northern Territories, the strategy is to hold out for a better opportunity to secure one’s ultimate objectives.

“The occupied territories of Iwo Jima, Ogasawara, and Okinawa were returned to Japan without any bloodshed,” Koda said. “We must look ahead to the future of Japan-South Korean and Japan-Russian relations, and never give up. The chance will come. It may take a century or two. But we must remain vigilant.” 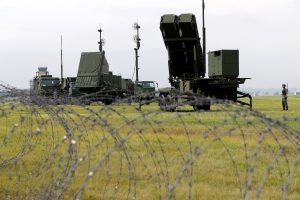