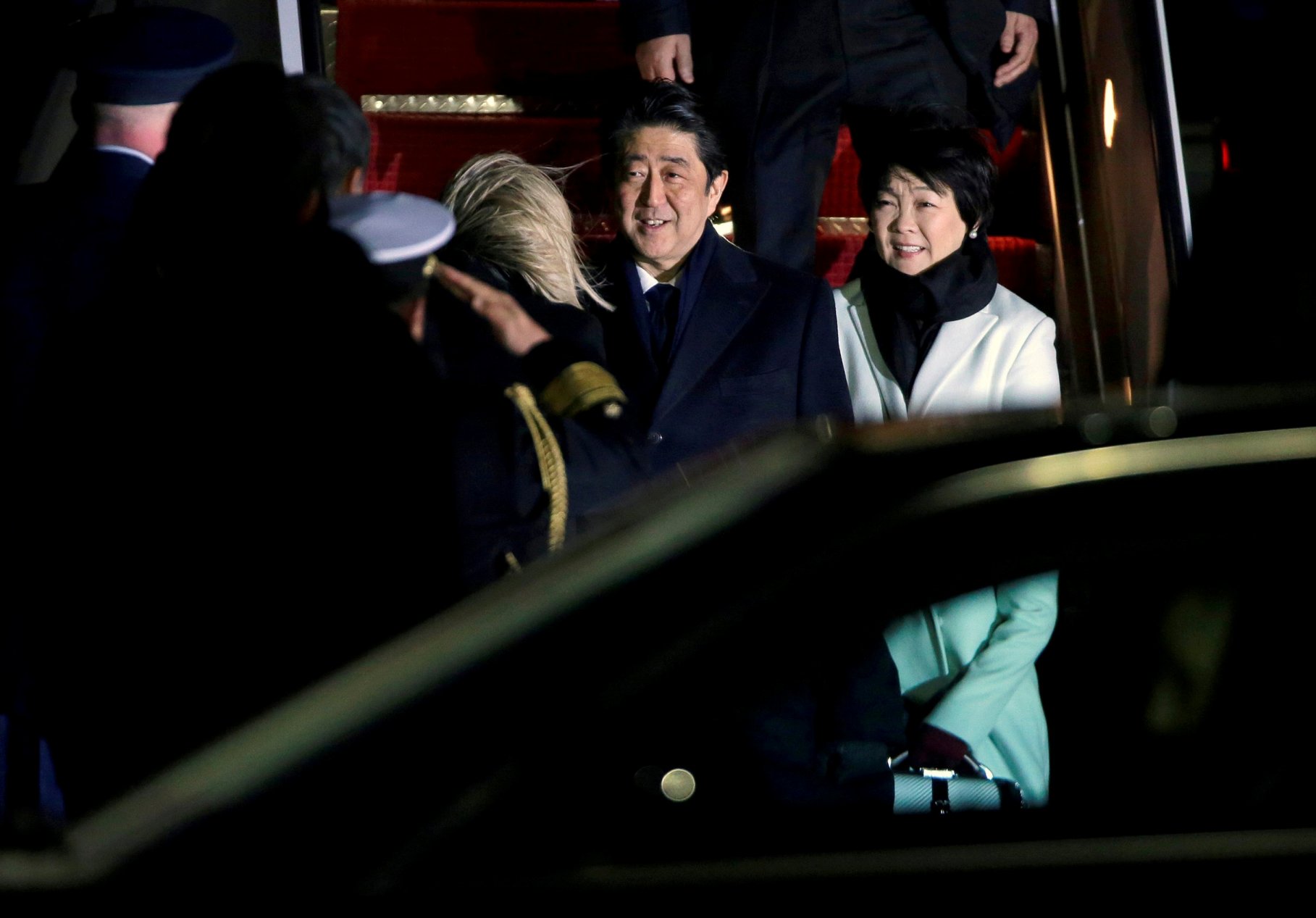 On the night of February 13, Prime Minister Shinzo Abe’s government jet returned to Japan from the United States after a whirlwind visit of over 43 hours that started with a bear-hug welcome from President Donald Trump and ended with a visit to the exclusive members-only Mar-a-Largo resort in Palm Beach, Florida. The two leaders spent nearly all of that time together and appear to have strengthened their bond. A few anecdotes follow below:

On the evening of February 11, Abe and Trump sat down for dinner at Mar-a-Largo after a full day of golf. Though they appeared relaxed and to be enjoying themselves, just minutes before they had both been informed that North Korea had launched a ballistic missile.

Abe explained the situation with North Korea and the danger it posed, saying he would need to speak to the press after the dinner. Trump responded that they should make it a joint appearance. He would only make a short comment, but just having him there should send a strong message to North Korea.

At the press conference, after Abe declared that “North Korea’s missile launch is absolutely intolerable,” and that North Korea should abide by the United Nations Security Council resolutions, Trump followed up, saying, “the United States of America stands behind Japan, its great ally, 100 percent.”

Trump must have been glad to have Abe visit because he certainly went all out with his welcome.

On the morning of the 11th, Trump and Abe shared a golf cart with Trump driving as they played the links at the Trump National Golf Club in Jupiter, Florida.

Abe later said he brought up the topic of the Trans-Pacific Partnership (TPP) that Trump has announced he would quit. “I was persistent in explaining the significance of the TPP, and [I believe] he gradually came to understand.”

He also talked about China, Korea, and Russia, including his perceptions of the leaders those countries. Abe reported that Trump listened quietly, only once in a while interjecting his own views.

The two also discussed the G7 summit to be held in Italy in May. Abe urged Trump to take a leading role at the G7 summit, promising he would support him and saying they should cooperate closely.

Trump thanked Abe, saying they should have one-on-one meetings at every international event, not just at the G7 but at the G20 summit as well. Even if there is no urgent business to attend to, he said, they should talk for at least 15 minutes. “My talks with you will always have priority!” he assured Abe.

In the morning, Trump played a great game of golf. Abe was in fine form as well, even shooting a birdie. Noting Abe’s short chops, Trump joked that the prime minister likes to take small steps. After finishing 18 holes, Trump noted that there was an even more beautiful golf course nearby. Should they go there for lunch or maybe even another round?

Of course, Abe couldn’t turn such a suggestion down. They then went 20 kilometers south to the Trump International Golf Club at West Palm Beach where they played another nine holes.

Both were mum about their scores claiming national security. Trump ended the day in high spirits saying he and Abe were good partners and he hoped Abe had enjoyed himself.

The high-level Japanese government officials who accompanied Abe pronounced the U.S. visit a great success, “better than expected,” and “perfect.”

Caution is warranted with Trump’s unpredictable administration, but the strong bond that the two leaders appear to have formed suggests a level of trust that should be able to overcome not only the bilateral issues between the two countries, but global issues as well.

Already the two governments are making plans for Trump’s first official visit to Japan, something even First Lady Melania looks forward to. At their dinner together, the first lady remarked that Japan was a clean and diligent country and that she would very much like to go there.

Trump tweeted as many as eight times during Abe’s visit:

A working dinner tonight with Prime Minister Abe of Japan, and his representatives, at the Winter White House (Mar-a-Lago). Very good talks!

Played golf today with Prime Minister Abe of Japan and @TheBig_Easy, Ernie Els, and had a great time. Japan is very well represented!

After two days of very productive talks, Prime Minister Abe is heading back to Japan. L

Makiko Takita is a political reporter with the Sankei Shimbun