BOOK REVIEW | ‘Law and Society in Imperial Japan: Suehiro Izutaro and the Search for Equity’ by Jason Morgan 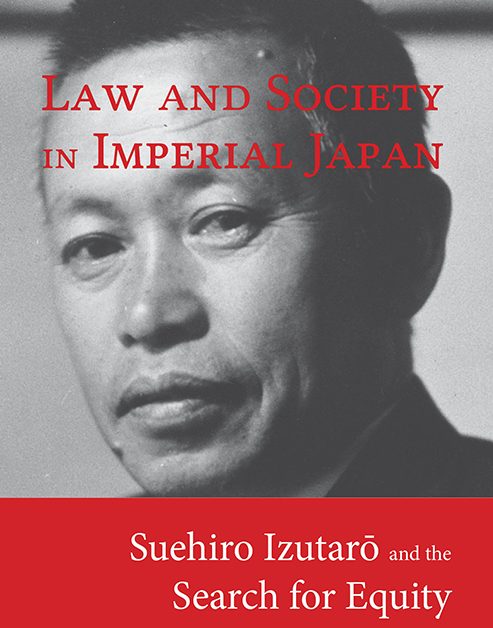 Rumor has it that Princeton decided not to create a law school because it thought a trade school would tarnish its scholarly reputation. True or not, Princeton does not have a law school. Harvard does.

As law professors, we teach our students to do all this. We teach them to be plumbers. Teaching plumbing (or legal doctrine), however, is not the most interesting thing in the world. Writing plumbing (or lawyering) manuals is even worse. Fortunately for those of us lucky enough to teach at one of the better law schools, talented students do not need us. They can easily learn the trade on their own.

Professor Jason Morgan carefully situates his elegant book within the intellectual world that we law professors created to avoid writing those trade manuals. Early in the 20th century, faculty at schools like Yale, Columbia, and Chicago started moving away from plumbing. Instead, they asked whether and how people actually used the law.

Some professors called their work “law & society” scholarship; others called it “legal realism.”

With a writing style nothing short of exquisite, Professor Morgan traces the intellectual odyssey of the man credited with bringing this law and society scholarship to Japan. Izutaro Suehiro graduated from the Tokyo Imperial University law faculty in 1912, and began his teaching appointment (Civil Code) in 1914.

Over the course of his career, he would help organize a study group to read and discuss recent opinions by the Supreme Court (called the Daishin’in). He would help found the Horitsu jiho journal, which continues to thrive today. He would help start the “settlement house” movement in the urban slums. He would help structure the ethnographic studies by the Southern Manchuria Railway.

Suehiro attributed many of his ideas to a largely forgotten Austrian scholar named Eugen Ehrlich. In fact, Suehiro studied at the University of Chicago — the university at the heart of modern social science.

Everything Turns on the Case Law

In organizing a study group on Supreme Court opinions upon his return to Japan, Suehiro was not promoting law and society scholarship. Instead, he was doing what any good plumber would have done. Studying appellate opinions is the way Christopher Columbus Langdell founded the modern Harvard Law School. When we plumbers think of the law, we think of litigated cases: “law” is a prediction of what a court will do. As eventual United States Supreme Court Justice Oliver Wendell Holmes famously put it, “a legal duty so called is nothing but a prediction that if a man does or omits certain things he will be made to suffer in this or that way by judgment of the court ....”

Not that anyone could realistically study the law through any other method anyway. Take Section 709 of the Japanese Civil Code: “If anyone intentionally or negligently violates the right of another, he must compensate that person for any damages he causes.” The Code adds a few sections on minors, animals, and joint tortfeasors, but that short sentence largely captures the universe of Japanese “tort” law.

In the modern law school, we spend a whole semester on this material.  What thoughts count as “intent”? How careless can one be without being “negligent”? Which rights does Section 709 protect? How much is a human life worth? And so forth. The Code covers none of this. In Japan as in Nebraska, everything turns on the case law.

Whether the law declares precedent binding or non-binding, judges will tend to follow it merely because they are busy. Having an enormous number of cases to handle, they try to decide them as simply as possible. If another judge has already decided a similar case and was not reversed on appeal, the easiest thing for the second judge is to copy him. He is not following precedent because he studied under Suehiro in college or Langdell in law school. He is minimizing effort.

Search for Equity Through the Gaps

Professor Morgan explains (p. 51) that Suehiro looked to law and society to locate “equity,” and saw in Ehrlich’s “living law” an “antithesis to rigid German legal idealism.” In the process, Suehiro may give pre-war Japanese judges a bit less credit than they deserve.

Judges in pre-war Japan cared about equity too. For that matter, judges probably care about equity in reasonably honest legal systems everywhere.  By the very terms of the Civil Code, legal actions contrary to the “public order and good morals” were void (Section 90). And even when the code seemed to give someone a right to do something, pre-war judges adopted continental jurisprudence to deny him that right whenever they thought his behavior “abusive.” Between the requirement of “public order and good morals” and the injunction against an “abuse of right,” pre-war law gave Japanese judges wide latitude to do what they thought equitable.

Like the generations of law and society scholars since, Suehiro studied the apparent disjunction between the way that the law seemed to tell people to behave, and the way people actually behaved. Ehrlich had been puzzled, Professor Morgan writes (p. 50), by “the gap between what the law in the books said, and what the people in the villages and towns actually did.” He observed, continues Professor Morgan, “a great deal of human agency floating clear of the legal realm and drawing on norms better understood by the new discipline of sociology.” Suehiro was puzzled too.

This apparent gap has stayed central to law and society scholarship ever since. The best-known article in modern law and society probably remains a 1963 piece by University of Wisconsin law professor Stewart Macaulay. Wisconsin businessmen rarely followed the terms of the contracts they negotiated, wrote Macaulay. Instead, they were usually “unaware of what is said in the fine print on the back of the forms they use.” Rather than anything written, they preferred “to rely on ‘a man's word’ in a brief letter, a handshake, or ‘common honesty and decency.’” And when a relationship collapsed, they settled their dispute “without reference to the contract or potential or actual legal sanctions.”

It fell to Takeyoshi Kawashima, one of Suehiro’s successors at the University of Tokyo, to popularize this notion of a disjunction between custom and law.  Writing in 1967 in a read-it-standing-in-the-subway Iwanami bunko-bon, Kawashima called this disjunction distinctively Japanese. Tokyo business executives ignored the law, explained Kawashima, because they had a peculiarly low level of “legal consciousness.”

So much do Japanese lack this consciousness that in relationships between close acquaintances “it is meaningless to ask whether or not a contract has been formed within the meaning of the provisions of the Civil Code.” After all, as Kawakami noted in The Legal Consciousness of Contract in Japan, 7 L. Japan 1 (1974), when “a Japanese makes an agreement with another person, the goodwill and friendship that gave rise to the agreement is more important to him than the agreement itself.”

As Japanese law scholar Frank Upham once quipped, Macaulay must have found quite a few Japanese businessmen up there in Wisconsin.

Businessmen in Wisconsin and Japan Focus on the End-game

Unfortunately, Macaulay and Kawashima — and Ehrlich and Suehiro — miss the import of the phenomenon. As law and economics professor Lisa Bernstein explains, businessmen do not negotiate the hard-edged contractual provisions to govern the ordinary course of their relationship. So long as a partner cooperates, they cut him slack. They negotiate the hard-edged provisions to govern any end-game, and to hold opportunism in check ex ante.

They conclude, in other words, “two well-developed sets of contractual provisions, one legally enforceable and one purely extralegal.” At the outset, an executive “may not know if the person with whom he is dealing is trustworthy.” He will want one set of norms to govern the relationship so long as his partner behaves honestly, and another to govern it if his partner cheats and their relationship collapses. None of this logic is peculiar to Wisconsin, and none is peculiar to Japan.

Suehiro believed that the incipient labor conflicts threatened social cohesion. Professor Morgan explores the way he helped create the pre-war labor legislation to address them. The 1923 earthquake flattened the Kanto plain. Professor Morgan also recounts the efforts Suehiro devoted to building the settlement houses that would mitigate the destitution.

As the militarization, the war, and the resulting polarization during the 1930s forced academics to choose sides, Professor Morgan poignantly describes some of the resulting pain. Suehiro’s wife and Tatsukichi Minobe’s (also of Tokyo Imperial University) wife were sisters. During the 1930s, both men were attacked for lese majeste. Minobe stared down the militarists, and famously lost his job. Suehiro stood down himself, and kept his. After the war, Minobe found himself recruited to help draft a new constitution.  Suehiro found himself purged as an “opportunist.”

Title: Law and Society in Imperial Japan: Suehiro Izutaro and the Search for Equity