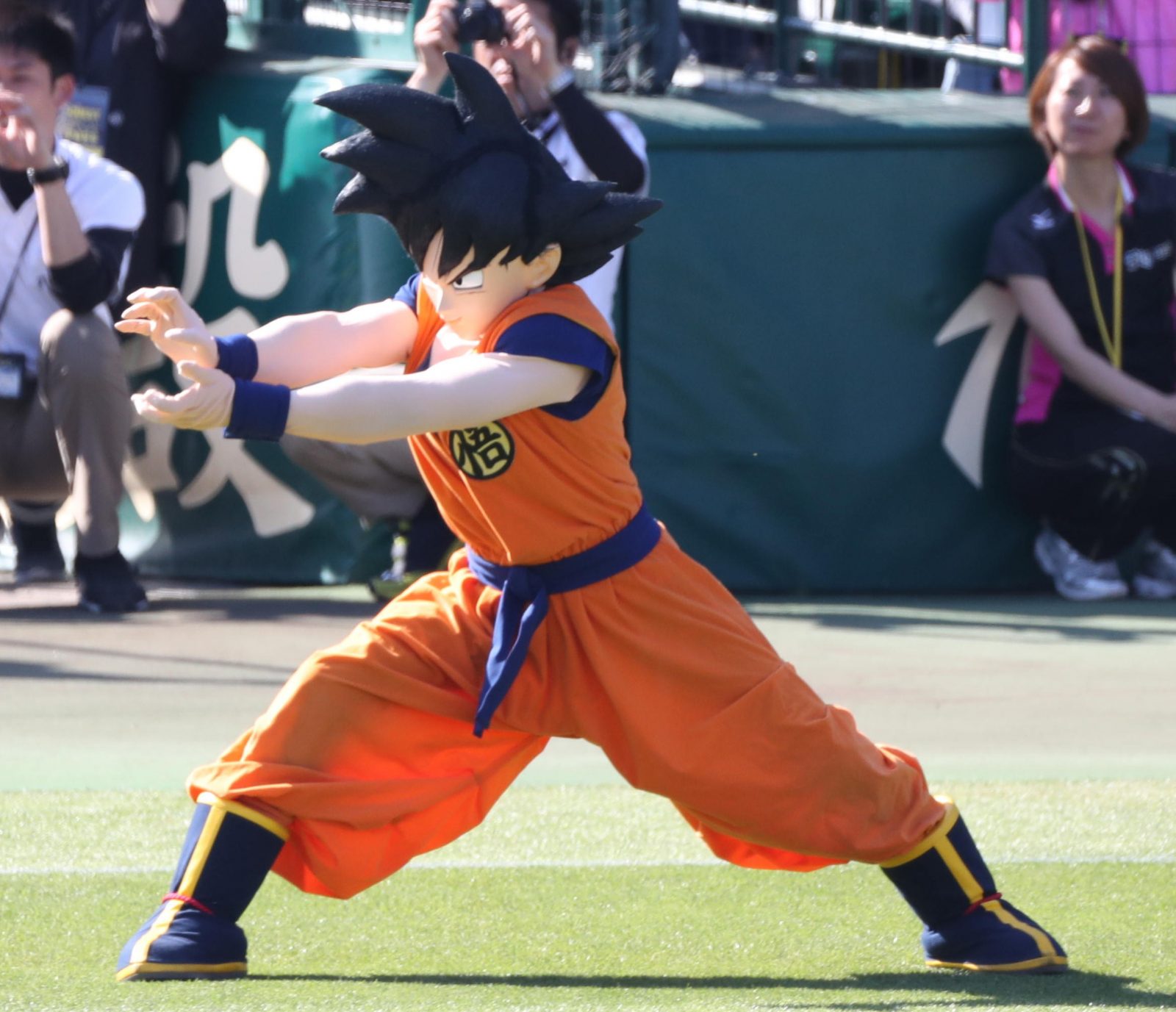 Son Goku, a mythical Monkey King figure from the sixteenth century Chinese novel, “Journey to the East,” as he appears in the videogame, "Dragon Ball"

“I was born in a place absurdly deep in the countryside. It was a tiny settlement inside a mountain.”

“Yeah. For generations my family line were its guardians. It was said the gods lived there because it was a sacred mountain. There was an uncut primaeval forest of virgin beech trees that had been growing there continuously for eternity.”

The speaker above is Monkey Man, one of a group of misfit schoolkids with secret superpowers. Like Spiderman or Batman, he hides his face when righting the world’s wrongs. The mask he uses is the likeness of Son Goku, the Monkey King from the sixteenth century Chinese novel, “Journey to the East.”

Older readers may remember the Japanese TV series featuring “the magic monkey” which became a cult program overseas in the 1980s. Younger readers are more likely to know Son Goku from the “Dragon Ball” manga-anime-videogame franchise.

Red Circle, the innovative British publisher, has come up with a second original novelette from best-selling writer Takuji Ichikawa. Appearing two years after The Refugee’s Daughter (Red Circle, 2019), Monkey Man is a fantasy tale, but one clearly grounded in contemporary concerns about environmental degradation, excessive corporate power and alienated youth.

Monkey Man and his pals are “awakened,” meaning that they have a different ethical sense to ordinary people, who suffer from “the misery virus”. The rough kids at school mock and beat them, but they never resist. Instead, they have developed a videogame which rewards altruistic behavior ー you win by giving away points to other players.

According to one girl, traditional shoot-‘em-up videogames are for “old blokes who live in the world of stone age CPUs. Our generation is cooler and smarter than that.”

Ranged against the awakened youngsters is “The Complex” of mega-corporations, the military and politicians. Its roots “spread out like a sticky, slimy, fungus-like mold and it uses manipulative language to sell completely unnecessary products to consumers that were actually nothing more than poison for the mind.”

Even worse, having engineered an enormous wealth gap, high-ranking members of The Complex are now trying to increase inequality in lifespan. They kidnap one of the Monkey Man’s friends and attempt to use her superpowers to rejuvenate a geriatric CEO of an enormous industrial group.

Ichikawa is a great admirer of teenage activists Greta Thurnberg and Malala Yousafzai, and Extinction Rebellion is explicitly mentioned in Monkey Man as a model to follow.

The sometimes naive political message will not suit everyone, but it does reflect some of the unease that many, not just idealistic youngsters, feel about the way the world is going today. An apt symbol of our era was the richest man on earth, tech oligarch Jeff Bezos, taking a space journey for sightseeing purposes, while multitudes of ordinary workers were stuck in cramped accommodation suffering the stress of COVID lockdowns.

In a recent interview, Ichikawa said, “I like stories that undo all boundaries. Dream and reality. Past and present. Me and you. And me and the world. As well as life and death.”

That phantasmagorical quality is present in the strange, magical world of “Monkey Man.” The references to Son Goku and the Japanese animist tradition connect the story to age-old folk tales.

It’s an absorbing read in its own right, with some of the charm of a Hayao Miyazaki anime film, and it also provides an intriguing picture of an ethical outlook that, judging by the author’s commercial success, commands widespread interest. The crisp translation is by husband-and-wife team, Daniel Lilley and Lisa Lilley.

A compulsive writer who claims to have thousands of unpublished manuscripts in store, Ichikawa sold a million copies of his mega-hit Be With You (VIZ Media LLC, 2008). That book went on to become a TV series and then a successful film that was remade for the South Korean and Chinese markets. The book has been translated into several languages, including English. Its success in East Asia may owe something to the themes of karma and rebirth which are also found in Monkey Man.

Clearly a writer who understands the zeitgeist, he himself was a misfit at school and was much later diagnosed with Asperger’s syndrome. In his writing, his sympathy for the marginalized and different is obvious.

Interestingly, he claims to have never indulged in that standard solidifier of group dynamics, karaoke singing. His favorite authors include Kurt Vonnegut, fabulist and poet Kenji Miyazawa and outsider artist Henry Darger who lived and died in total obscurity, leaving behind 20,000 pages of fantastical writing.

Red Circle’s mission is to publish original contemporary Japanese literature in English. Like all their previous books, Monkey Man has not previously appeared in any language, Japanese included.

Other Red Circle publications include works by well-known writers such as mystery doyen Soji Shimada, Naoki Prize winner Kazufumi Shiraishi and the late Kanji Hanawa, a scholar of French literature and prolific short story writer. All are well worth exploring. Monkey Man is a welcome addition to the Red Circle roster.

Formats: Paperback and eBook are available.

To learn about the book, see the publisher’s website, here.