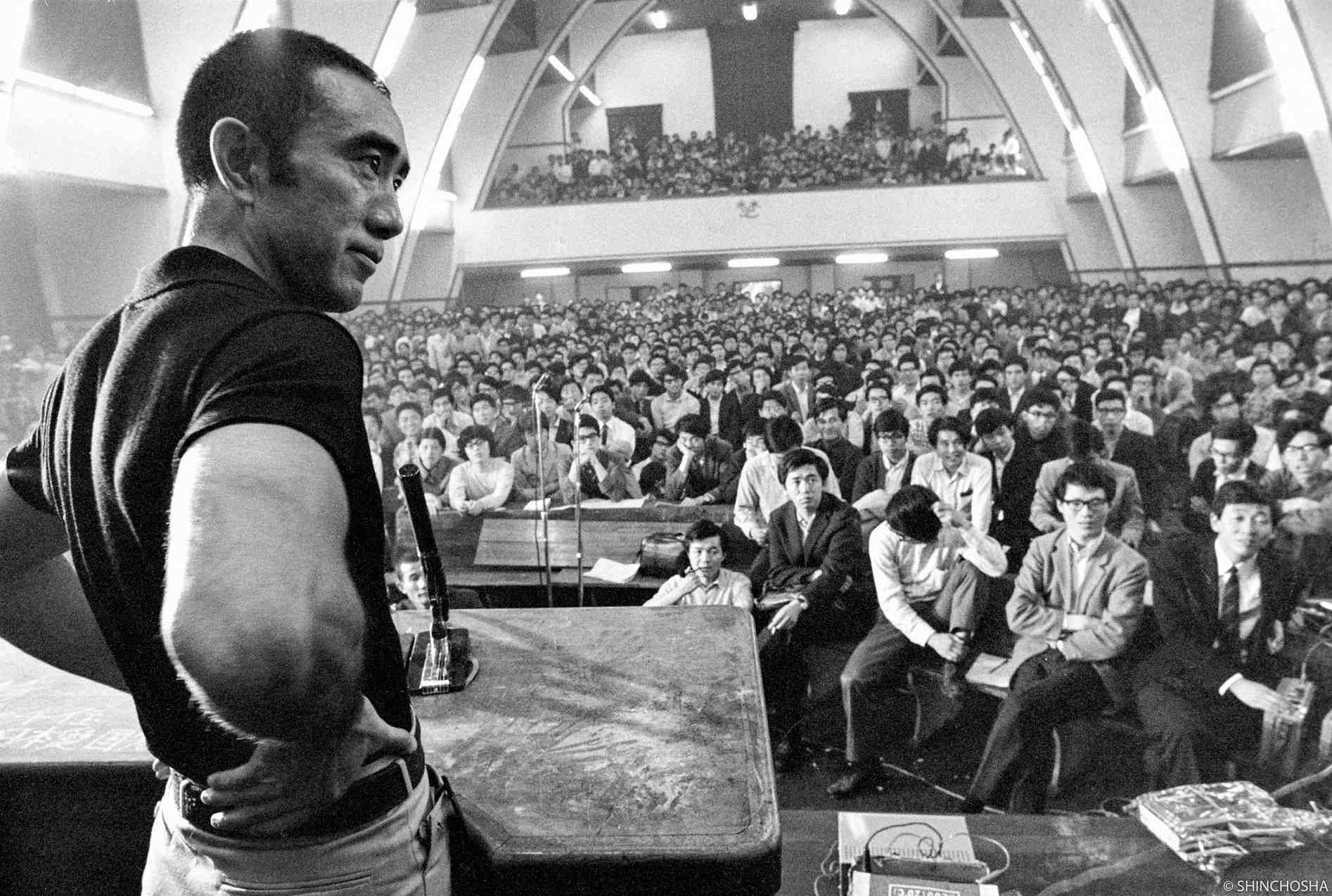 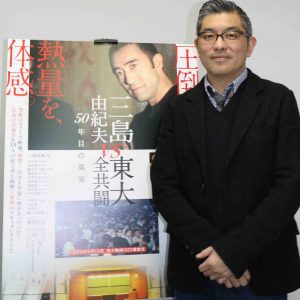 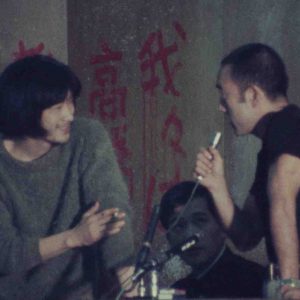 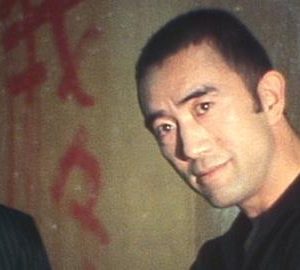 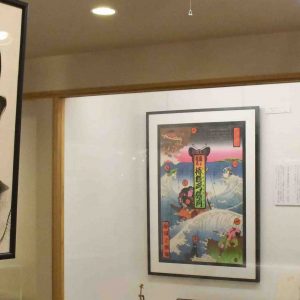 Mishima Yukio and his literary works 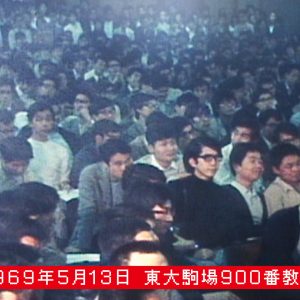 A wild-haired and wild-eyed young man. In one hand, a cigarette; in the other, a baby. To his left, the musclebound figure of author Mishima Yukio. He too smokes, microphone in hand. The two figures on one stage share a match, an indication of the mutual respect between them.

Postwar author of numerous seminal novels, Mishima would commit ritual suicide in 1970, just 18 months after appearing in the Tōdai debate featured in the film. His failed purpose was to incite a coup d’etat among the Tokyo branch of the Japanese Self-Defense Forces.

On the day of the debate, however, Mishima arrived at Tokyo University’s Kamaba campus with a bodyguard made up of his own youth militia, the Tatenokai (Shield Society). Evidently hostile to the famed author’s presence, the Zenkyoto (All Campus Joint Struggle Committee) stocked the front row of the amphitheater with their own supporters, ready to commit themselves bodily to the protection of their representatives in the debate.

Meanwhile, posters by the entrance to Lecture Hall 900 denounced the nationalist author as an “anachronistic gorilla.” Biographer Henry Scott Stokes later revealed Mishima was fearful for his life prior to the event.

Talking heads featured throughout the film include a number of the figures present at the debate, members of both Mishima’s Shield Society and Zenkyoto now in their dotage. Accompanying the footage of their young and vibrant selves, these figures describe the climate of hostility present in the late 1960s.

Heralding the internecine battles that would lead to the implosion of the New Left movement in the 1970s, Zenkyoto was a loose affiliation of student protest groups, anti-war activists, and workers unions galvanized by their shared opposition to ANPO, the United States-Japan Security Treaty. In the film, the former Zenkyoto leaders attest to their anxiety, lest rival New Left factions attempt to disrupt the debate.

What emerges, however, despite these fears, is an image of an intensely fought ー yet respectfully realized ー debate between a writer at the peak of his prodigious talent and a group of students utterly invested in their attempts to overthrow the established system.

At a Q&A session held subsequent to screening the film at Tokyo’s Foreign Correspondents Club on March 17, director Toyoshima stated that, as someone who knew little of Mishima’s life and work prior to becoming involved in the production, it was this sense of camaraderie and respect exhibited by both sides, despite their ideological differences, that most impressed him about the debate.

No more so is this evident than in the philosophical jousts depicted between Mishima and the wild-haired young father, Akuto, a figure who would himself go on to become an avant-garde theater director of considerable renown.

Toyoshima’s film is clearly at pains to show how Mishima never feigned to patronize his young audience, ultimately winning the admiration ー as per the testimony of surviving Zenkyoto members ー of his apparent ideological enemies.

The French academic Thomas Garcin writes in an essay, titled “‘We are all nihilists’: Mishima Yukio, political activism and the student New Left,” that this is partly explained by a sense of disenchantment with the parliamentary politics of the period shared by both Mishima and his young adversaries. Both sides experienced a sense of nihilism, Garcin analyses, due to their lack of belief in the Establishment and its ability to guide Japanese society throughout the long postwar era.

A key moment in Toyoshima’s film occurs as Mishima and Akuto go back and forth on the philosophical relationality of objects and signs to the moral and ethical nature of the student protest movement.

A Zenkyoto member in the crowd cries: “This is all philosophical nonsense! I’m here to see Mishima get beaten up!” This draws cheers from the crowd, yet a furious reaction from debater Akuto.

He challenges the heckler to act on his words, to approach the lectern and attack Mishima bodily, if that truly is his will and desire. Failing to act on the threat, the young Zenkyoto member nonetheless does approach the stage, joining the debate against the famous author.

This is the key strength of the film: its depiction of a time in which youth and celebrity alike were engaged actively in the political process, in a discussion of the direction of the nation. It marks a stark contrast, it must be said, to the apolitical climate of today.

The documentary Mishima Yukio: The Last Debate opened in cinemas in Japan on Friday, March 20. International sales are handled through GAGA Corp., Japan.

Review by: Will Fee