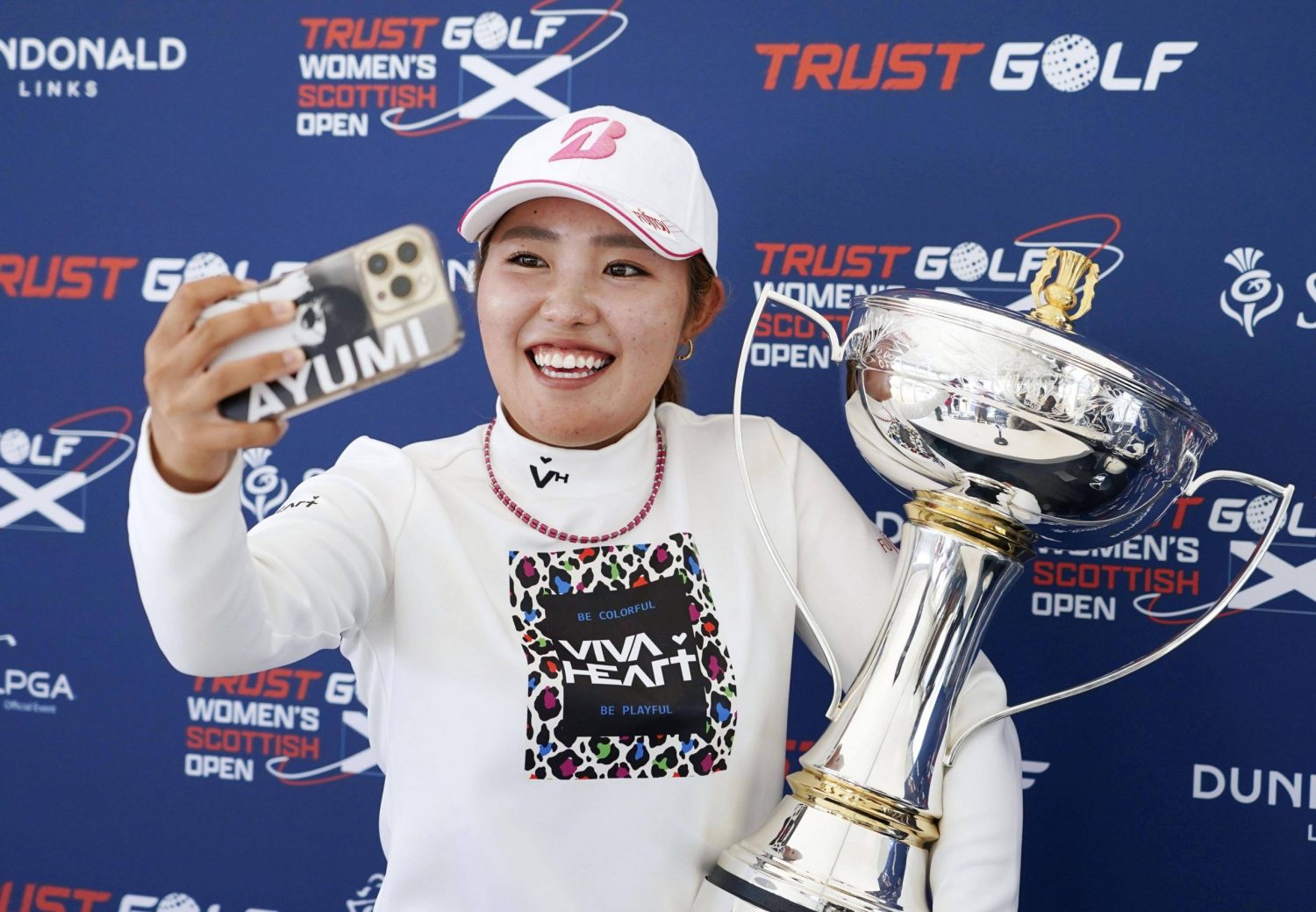 Playing with poise and showing confidence in her shot-making ability, Ayaka Furue excelled in the final round of the Women’s Scottish Open on Sunday, July 31.

The pinnacle of her triumphant performance was a run of six consecutive birdies on holes 6-11, a stretch that solidified the 22-year-old LPGA Tour rookie’s chances of winning the title.

Furue finished at 10-under-par 62, a course record, in the final round at Dundonald Links in Irvine, Scotland.

Her signature shot of the day was a 40-foot putt for birdie on the par-3 15th hole, which gave her the lead for the first time. And she didn’t relinquish the lead.

Furue entered the final round four shots off the pace set by France’s Celine Boutier and New Zealand’s Lydia Ko (15-under 201). She was in a four-way tie along with compatriot Nasa Hataoka for ninth place at 11-under 205 through three rounds.

“I had the right mindset,” Furue said after winning the tournament with a bogey-free final round and the top prize of $300,000 USD (¥39.7 million JPY). “I thought I had to go low, and I played very well. I hit good shots. All around my game was good, and the birdie putts I wanted to make and had to make, I was able to make.”


Strong Start in Final Round

On Sunday, Furue, who was second in JLPGA Tour earnings in her homeland in the 2021 season, began her title quest with a birdie on the par-4 first hole. By the midway point of the final round, she was at 5-under 31, then maintained that pace for the rest of the round.

“I putted well today. But all week, I putted very well,” Furue told reporters. “I’ve been working on putting two balls at once to square up the face to the ball and that helped me.”

Consecutive birdies to conclude the round added a high note to Furue’s weekend.

Working with Scottish caddie Michael Scott, Furue credited him for providing valuable advice throughout the tournament.

“He was very helpful. He gave me a lot of good advice,” said Furue, the world’s 30th-ranked women’s golfer. “He was very helpful after it (the ball) landed, how much it would roll. He calculated that very well and helped me out with wind direction and how the wind affects play.”


Boutier Finishes Last Round after Furue

Furue completed her sterling final round while Boutier was still on the course.

Boutier had three bogeys in the latter half of the final round, including on the par-4 16th. She placed second at 18-under 270.

“I started making some bogeys and I feel like it’s not easy, you know, playing in the final group,” Boutier said. “Then obviously when someone just has their day, you just can’t do anything about it really.”

South Korean Hyoo Joo Kim and American Cheyenne Knight tied for third at 271. Alison Lee of the United States and Ko tied for fifth at 272, while Nasa Hataoka placed seventh at 273, including a 68 in the final round.

After winning the Fujitsu Ladies as an amateur competitor in October 2019, Future launched her pro career.

Over the past few years, she has captured seven titles on the JLPGA Tour. And her most recent title was the Toto Japan Classic in November 2021. Her six JLPGA titles in the 2021 season were second only to Mone Inami’s nine.

Before obtaining her LPGA Tour card, she had a fourth–place showing at the 2021 Evian Championship, one of five majors in women’s golf.

Furue placed tied for 19th at the Evian Championship in France the week before the Women’s Scottish Open.

Up next: the AIG Women’s Open, also known as the Women’s British Open, August 4-7, the final major of the year.

“With this win, it builds up a lot of confidence for me and I’m looking forward to having more big tournaments and playing at next week’s AIG Women’s Open,” said Furue, who revealed that she had rice and chocolate corn flakes for breakfast on the morning of her first triumph as an LPGA rookie.

Furue also said she’ll wipe the metaphorical slate clean and start from scratch to prepare for for her next competition at Muirfield in Scotland.

“I’m tired, so I’ll get some rest and go at it with a new mindset for next week,” she commented.