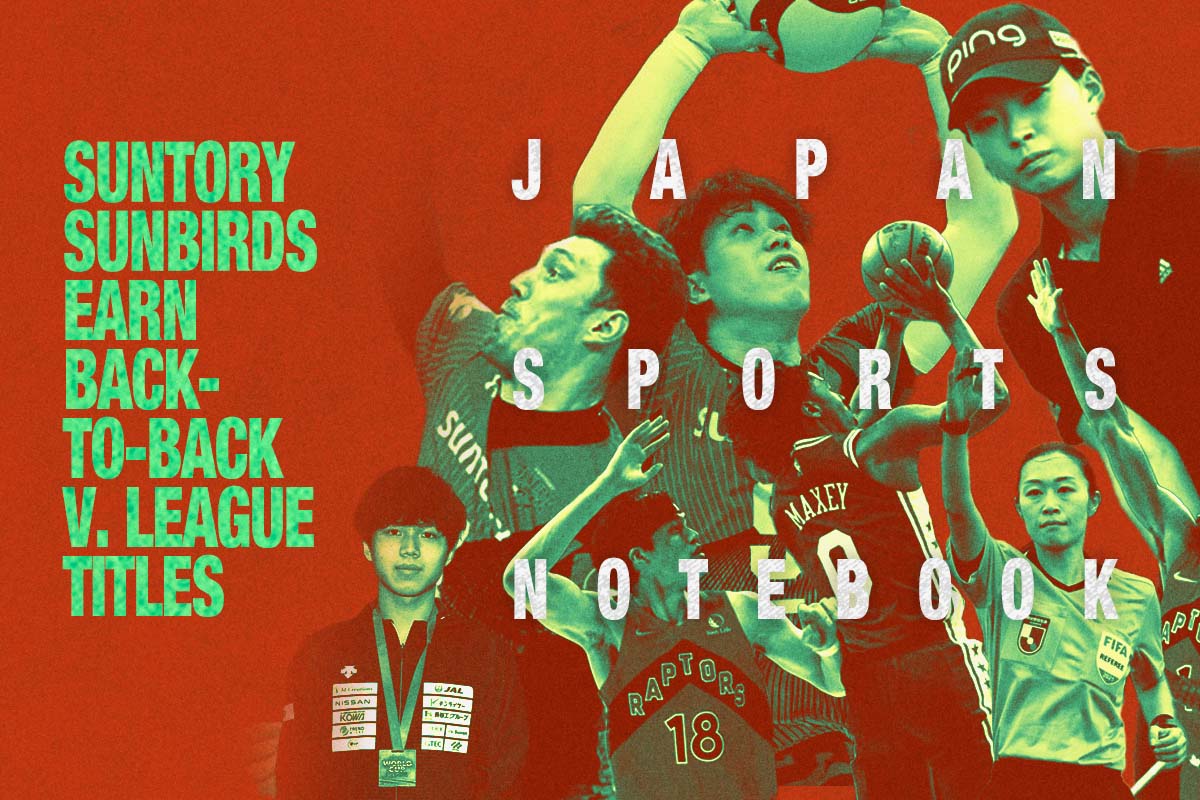 After dropping all three sets (25-19, 28-26, 25-21) to the Wolfdogs Nagoya on April 10, the first day of the Japan men’s professional volleyball finals, in Shizuoka, the Sunbirds stormed back with a determined effort.

Then, 15 minutes after the second round concluded, the winner-take-all golden set began, and the Sunbirds maintained their strong form at Chiba Port Arena, winning 25-17.

The V. League launched in 1994. Ten teams competed in the men’s circuit this season. There’s also a women’s V. League, which featured 12 teams in the 2021-22 campaign.

The Japan Volleyball League, which preceded the V. League, began in 1967.

He reflected on the team’s journey to another championship after the match.

“Today we were able to play volleyball from start to finish, which is the culmination of this season, and we were able to attack without giving pace to our opponents,” Oya said, according to comments posted on the team’s official website.

Outside hitter Dmitriy Muserskiy, an imposing 218-cm force on the frontline, was thrilled with the outcome.

“I’m glad to win two championships in a row,” Muserskiy said. “I want to thank everyone on the team.”

Suntory compiled a 29-9 record this season.

For the 2021-22 season, the Sunbirds placed two players on the V. League’s Best 6 team, outsider hitter Masahiro Yanagida and Oya.

Hinako Shibuno shot a bogey-free 2-under 70 in the final round of the Lotte Championship in Ewa Beach, Hawaii, on April 16.

The solid effort helped carry Shibuno to a 9-under 279 and a runner-up finish in the LPGA Tour event at Hoakalei Country Club.

South Korea’s Hyoo Joo Kim finished at 11-under 277 to win the tournament.

For Shibuno, her overall performance in Hawaii was a positive experience.

“I can build on having no bogeys from the third and fourth days when there were difficult winds and with tough pin setups,” Shibuno said, according to Kyodo News. “I couldn’t win but I personally think it was a reward for my hard work. I’ll be doing so even more going forward.”

At 18 years and 3 months, Iimura accomplished the feat by earning the bronze medal at the Men’s Foil World Cup in Belgrade on April 17.

In the quarterfinals, Iimura triumphed over Germany’s Alexander Kahl, 15-6.

April has been an important period in Iimura’s blossoming career. This month he also shined on the world stage at the Junior and Cadet Fencing World Championships in Dubai, claiming the men’s individual junior foil title.

And Iimura recognizes the growth he’s shown as a fencer.

“I think I was able to carry winning momentum from the world juniors to place third here at the World Cup,” Iimura was quoted as saying by Kyodo News. “I’m not satisfied with the result but I hope to give myself a confidence boost through this medal and keep devoting myself [to the sport].”

“Their selection reinforces the AFC’s commitment to strengthen and develop the women’s game at all levels as well as in ensuring the AFC’s women match officials continue to receive the highest standards of quality education and expert guidance to scale the biggest stages in world football,” the Asian Football Confederation said in a statement.

Yamashita, 36, has been registered as an international referee since 2015. The Tokyo native worked at the 2019 FIFA Women’s World Cup and the Tokyo Olympics last year, overseeing the United States-Sweden women’s match.

Bozono, a Tokyo native, has also been an international soccer ref since 2015.

Teshirogi, who hails from Hokkaido, made her international officiating debut in 2013.

Like Yamashita, Bozono and Teshirogi also worked at the Tokyo Olympics.

Upon the announcement of her appointment in April 2021, Bozono expressed gratitude for the opportunity.

“Although the world is still in a critical situation, I feel very honored to be appointed as a referee for the Tokyo Olympics,” she said in a statement. “I am filled with gratitude towards my co-workers, family, referee mates, and everybody involved in the Tokyo football community, for all of their support. I will give my best efforts to prepare myself both physically and mentally to help the success of the tournament.”

The Kagawa Prefecture native came off the bench and logged 5:27 of court time in the Raptors’ first-round playoff series opener against the Philadelphia 76ers on April 16. He finished with two points on 1-for-2 shooting, nailing a turnaround jumper.

The 76ers won the first three games of the best-of-seven series, forcing a must-win situation for the Raptors in Game 4 on April 23.