Update: On July 9, 2017, UNESCO inscribed the Sacred Island of Okinoshima and Associated Sites in the Munakata Region on the World Heritage List. Shortly before the approval, Japan Forward visited the Munakata region to learn the traditional meaning of these sites. Our original report is as follows.

This week, UNESCO will consider Japan’s proposal to nominate “Okinoshima Island and Related Sites in the Munakata Region” as a World Heritage Site. We sat down with Takayuki Ashizu, chief priest of Munakata Shrine, to understand why the new nomination is so important, and what the ancient rituals of Okinoshima mean to the priests who uphold them.

Although Japan’s proposal places Okinoshima Island first and foremost among the designated sites, head priest Ashizu stressed that the proposal includes three equally sacred spaces, which are considered by Shinto priests to enshrine three sister goddesses of equal rank. Of these three spaces, the large shrines of Hetsu-miya and Nakatsu-miya are open to the public, while the island of Okinoshima is officially closed and used only for ritual purposes. Nonetheless, all three shrines are equal parts of Munakata Taisha.

According to the Nihon Shoki, one of Japan’s earliest written documents, the sun goddess Amaterasu Omikami sent down three sisters named Ichikishimahime, Tagitsuhime, and Tagorihime to live in the three shrines of Munakata Taisha and protect the imperial line.

The Nihon Shoki is believed to record oral traditions from earlier eras of Japanese prehistory. The island of Okinoshima, called “the island where the god lives,” is home to Tagorihime. Archaeologists excavating on Okinoshima have recovered valuable relics of the imperial family dating back to ancient times.

Chief priest Ashizu hopes that UNESCO will recognize all three of the Munakata shrines and the entire ritual complex designated by Japan’s World Heritage proposal. He described the ceremonies honoring the three goddesses as a continuation of “animism” going back to ancient times.

“This is the earliest form of religion that human beings come up with, and although Japan is a developed nation, we are still continuing it as it is. Japanese people don’t even realize this,” he said.

“The biggest difference between the world of animism and monotheism is belief in the basic goodness of beings. Monotheists worship an all-knowing, all-powerful god, and he comes into conflict with other beings. But for animists, there is no such god, and everyone is assumed to be basically good, so it is quite a gentle faith,” he explained.

Ashizu connected the general “yielding” principles of animism to centuries of prayers at Munakata Shrine by Japan’s successive emperors and their representatives. “The Emperor rules through prayer, not military power,” he continued. “There is no need to force rituals in Kyushu to conform to the ways of rituals elsewhere.”

While recognizing that this may be an unfamiliar approach for many monotheistic religions, Ashizu suggested that, in Shrine Shinto’s more “gentle” approach, different types of ritual can be “integrated” into the nation without changing their character.

In the case of Munakata Shrine, this includes preserving the Okinoshima mysteries, a 10-day ritual which archaeological evidence shows has been conducted in various forms for at least 1,600 years. The remote island of Okinoshima is a private island belonging entirely to the shrine, and is used only for ritual purposes. Only adult male priests officially authorized by the shrine are allowed to join the ritual, the details of which are kept secret even to this day. However, the general public can also worship the distant goddess of Okinoshima, through an outpost shrine on the island of Oshima. 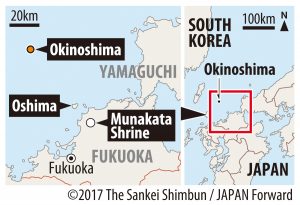 Although the rituals have continued through the centuries, Munakata Shrine remains proactive in finding ways to contribute at the global level, including environmental awareness. Environmental problems are problems for the shrines, says Ashizu, because Nature itself is a kami (means God in English). In 2014, the shrine hosted the Munakata Eco-100 International Forum, drawing 100 speakers from across Japan as well as Nobel Peace Prize recipient José Ramos-Horta and representatives of Sweden, UNESCO, and the Intergovernmental Panel on Climate Change.

Chief priest Ashizu also recognized the emergence of folk beliefs and practices surrounding the shrine. Munakata Shrine is famous in the local community for the purification rituals that priests perform for newly purchased cars. The priests ritually cleanse the car and offer prayers to protect drivers from traffic accidents – a practice that originates in a boat purification ritual offered to seafarers.

While car purification is not related to Amaterasu Omikami’s divine mission for the goddesses of Munakata, Ashizu said that it is part of Shinto’s “yielding” principle to respond to popular beliefs. “Popular beliefs cannot be ignored. People attribute different powers to the kami over time,” he said. “But the kami does not change.”

Avery Morrow is a graduate student in religious studies at the University of Tokyo.