On the evening of Sunday, February 19, the Fuji TV program “Mr. Sunday” broadcasted images captured on a security camera before and after Kim Jong-nam, the half-brother of Kim Jong-un, the chairman of the Workers’ Party of Korea, was assassinated by two women.

The incident occurred in the departure lobby of Kuala Lumpur International Airport’s Terminal 2. Mr. Kim Jong-nam stood still for a short time and after looking at a bulletin board listing destinations, lined up at a departure lobby counter. The suspect, Siti Aishah (25), an Indonesian national, approached him and appeared to be speaking to him. Immediately after that, suspect Doan Ti Huong (28) covered Kim Jong-nam’s face with both her hands and rubbed something onto it. The incident only lasted two seconds. After that, Doan escaped quickly down an escalator to the next floor.

As well as capturing images of the two women who attacked and killed Kim Jong-nam with what appeared to be a liquid, another security camera caught images of some men observing the attack while sitting in a restaurant only a few meters behind them. It appears that they arrived at the airport one and a half hours before Kim Jong-nam arrived. It is believed that the men repeatedly carried out elaborate rehearsals with the women at the site the day before the crime. 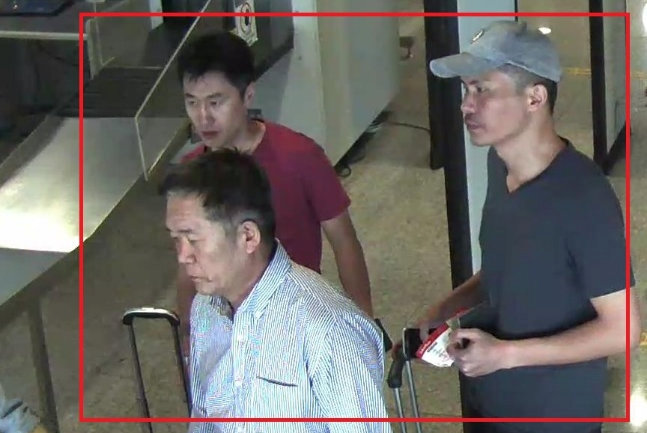 The Indonesian suspect testified that she was duped into making a comedy-show prank movie and the other woman, who was arrested carrying a Vietnamese passport, denied murderous intent saying, “I didn’t know it was a poisonous substance.” In fact, there are reports from the surveillance images that one of the men applied what looked like a poisonous substance to the gloves of one of the women just prior to the attack.

According to local media, images obtained following the attack have confirmed that when the men were on their way to a departure gate to board a plane, they entered a nearby toilet, removed the gray, purple, and green clothes they were wearing and changed into different clothes.

At a press conference on February 19, Malaysian police announced that apart from the two who committed the crime, four male suspects of North Korean nationality were still at large. The four men, suspected by the police to be the main culprits, entered Malaysia separately between January 31 and February 7 and immediately following the crime on the 13, they fled the country. Investigators suspect that they have already returned to Pyongyang, returning via Kuala Lumpur, Jakarta, Dubai, and Vladivostok.

In addition, Li Jung-Chulu, a North Korean national and suspect who was arrested on February 17, was working in the IT sector in Kuala Lumpur. He graduated from a university in North Korea in 2000 and was engaged in research in India and was arrested when he was home visiting family. According to the China Times, the same suspect when questioned claimed that he was not at the scene of the attack and said, “I don’t know the two women.” The police believe that though he is an expert in chemistry, he only drove the men to the airport and there is a possibility that he was manipulated by a professional group called “The Secret Agents.”

But the tactics employed by the suspects who escaped are undeniably formidable compared to those who were arrested so far. As well as being persuaded to perpetrate a crime, there is a strong possibility that the two women arrested were locals used as mere pawns. The facts concerning the cunning, cold-blooded methods of the “Secret Agents” from the north are gradually emerging.

Hideki Yoshimura is chief correspondent in Singapore for Sankei Shimbun. He is reporting from Kuala Lumpur.

Hideki Yoshimura is Editor at the Economic News Department of the Sankei Shimbun, Tokyo, Japan