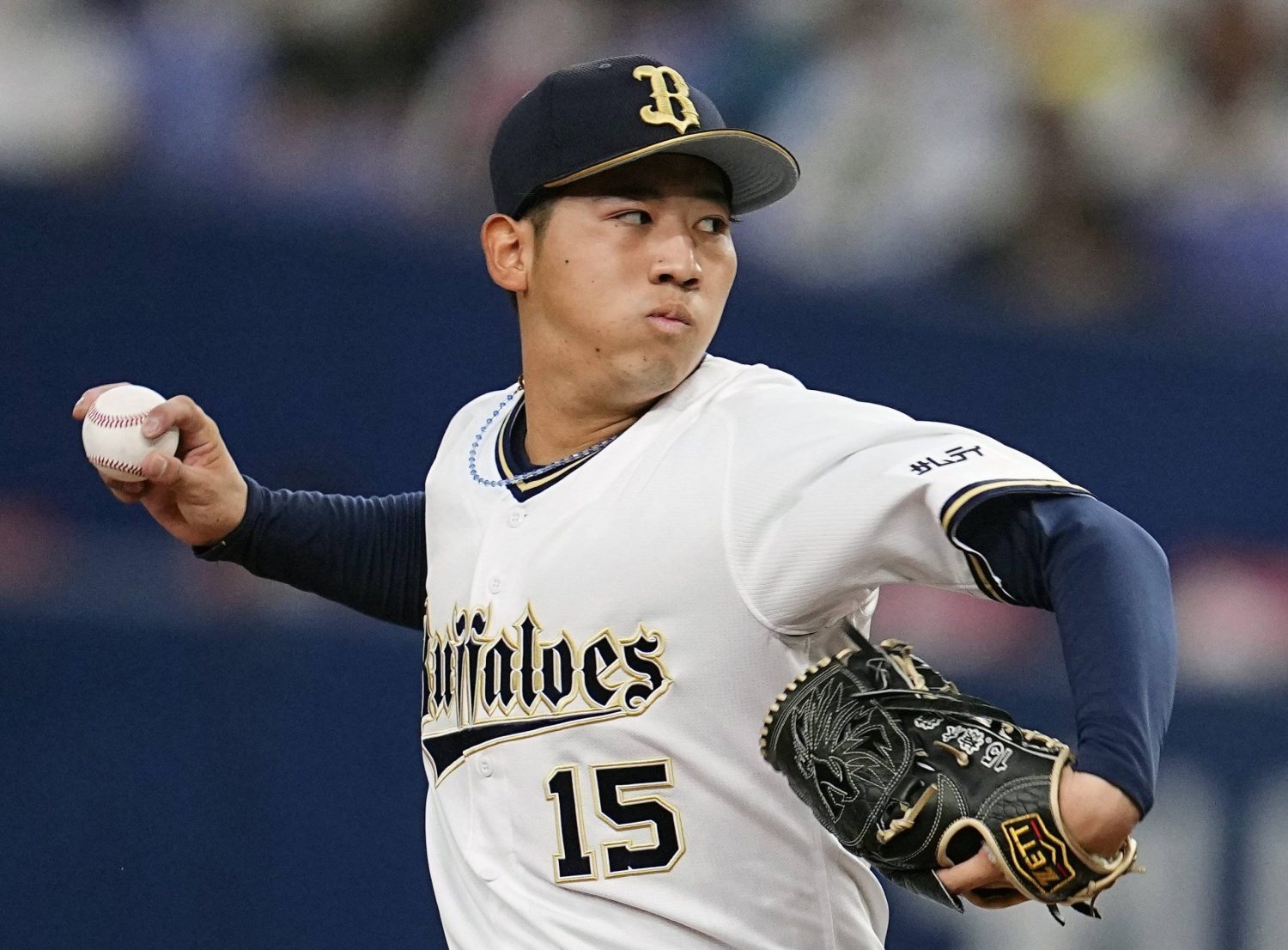 Orix Buffaloes starter Ren Mukunoki fires a pitch in a game against the Hokkaido Nipponham Fighters at Kyocera Dome on July 20. (KYODO)

In the season of the no-hitter, Nippon Professional Baseball came oh-so-close to seeing another one on Wednesday, July 20.

That’s when Ren Mukunoki, the top draft pick of the Orix Buffaloes last fall, allowed his only hit of the game with two outs and two strikes in the ninth inning of a 2-0 win over the Hokkaido Nipponham Fighters.

Ryusei Sato of the Fighters lined a 2-2 slider up the middle at Kyocera Dome in Osaka to break up the rookie right-hander’s bid for history.

Four no-hit shutouts have been thrown in 2022. That ties the record for second most in a single season.

“I wanted to end with a strikeout but that backfired on me,” the 22-year-old Mukunoki told Kyodo News. “Through the eighth inning, the crowd was applauding every pitch and I wanted to respond to that. But in the end, I threw a bad one.”

Mukunoki (2-0) struck out 11 while walking three in a 116-pitch outing, just his second pro start. He allowed two hits over six scoreless innings in his July 7 debut.

The Buffaloes did all their scoring in the third inning on a home run by Masataka Yoshida.

The Hanshin Tigers became the third franchise in NPB history to reach 5,500 wins on Friday, July 22.

Koyo Aoyagi allowed one run over six innings to lead Hanshin to a 6-3 win over the Yokohama DeNA BayStars at Koshien Stadium. It was also the 250th victory for fourth-year manager Akihiro Yano.

The Tigers got a pair of two-run homers from Yusuke Ohyama and Teruaki Sato.

The Yomiuri Giants and the Pacific League’s Fukuoka SoftBank Hawks are the other two teams to have reached 5,500 wins.

The Tigers are one of the original members of Japan’s first pro league and earned their first win on April 29, 1936.

The surprising Saitama Seibu Lions have been one of the hottest teams in NPB of late.

Few picked the Lions to contend in the Pacific League, but they are right in the thick of the pennant chase.

Submarine right-hander Kaito Yoza (7-3) threw five innings of one-run ball to lead the Lions to a 5-1 win over the Nipponham Fighters at Sapporo Dome on July 18. That win temporarily moved the Lions into first place in the PL standings, a half-game ahead of the SoftBank Hawks.

As of this writing on Saturday, July 23, the Lions were in second place, a half-game behind the Hawks.

The Lions finished last in the six-team standings last season, which makes their resurgence in 2022 all the more impressive.

At the other end of the spectrum, the Yomiuri Giants are in free fall.

After starting the season strong and spending most of the first half at or near the top of the Central League standings, the Giants have tumbled all the way to fifth place as of July 23.

The last time the big-spending Giants were in fifth place after playing 90 games was way back in September of 2009.

When Yakult Swallows hitter Jose Osuna hit a grand slam in the first inning off Tomoyuki Sugano on July 18 at Jingu Stadium, it was the fourth consecutive game in which the Giants gave up a grand slam.

Taniho made her stadium announcing debut on August 9, 1991 at Kawasaki Stadium.

Anyone who has been to a Marines game will recognize her unique way of announcing a player’s name by extending the last syllable. Saburo Ohmura, who went by his first name Saburo, was “Saburoooohhhhh.”

One of the many endearing qualities of Nippon Professional Baseball is the presence of the female stadium announcers known as “Uguisu Jo.”

“It’s all gone by so quickly,” Taniho told Yahoo News. “I want to see a championship so I’ve got to hang in there a bit longer.”

It took awhile but Shogo Akiyama of the Hiroshima Carp is starting to get back in the swing of things after returning to NPB after two-plus seasons in MLB earlier this summer.

Akiyama went 4-for-4 with a game-tying eighth-inning homer on Friday, July 22 to lead the Carp to a 5-2 win over the Central League-leading Tokyo Yakult Swallows.

The win allowed the Carp to move within 11 games of the Swallows.

Akiyama also hit a double in a thrilling 10-5 win over the slumping Giants at Tokyo Dome on July 17.

In that game, Shota Dobayashi smacked a pinch-hit grand slam in the fourth inning as Hiroshima completed a three-game sweep of the Giants.

The acquisition of Akiyama is starting to look like it will pay big dividends for the Hiroshima club, which lost Seiya Suzuki in the off-season to the Chicago Cubs.