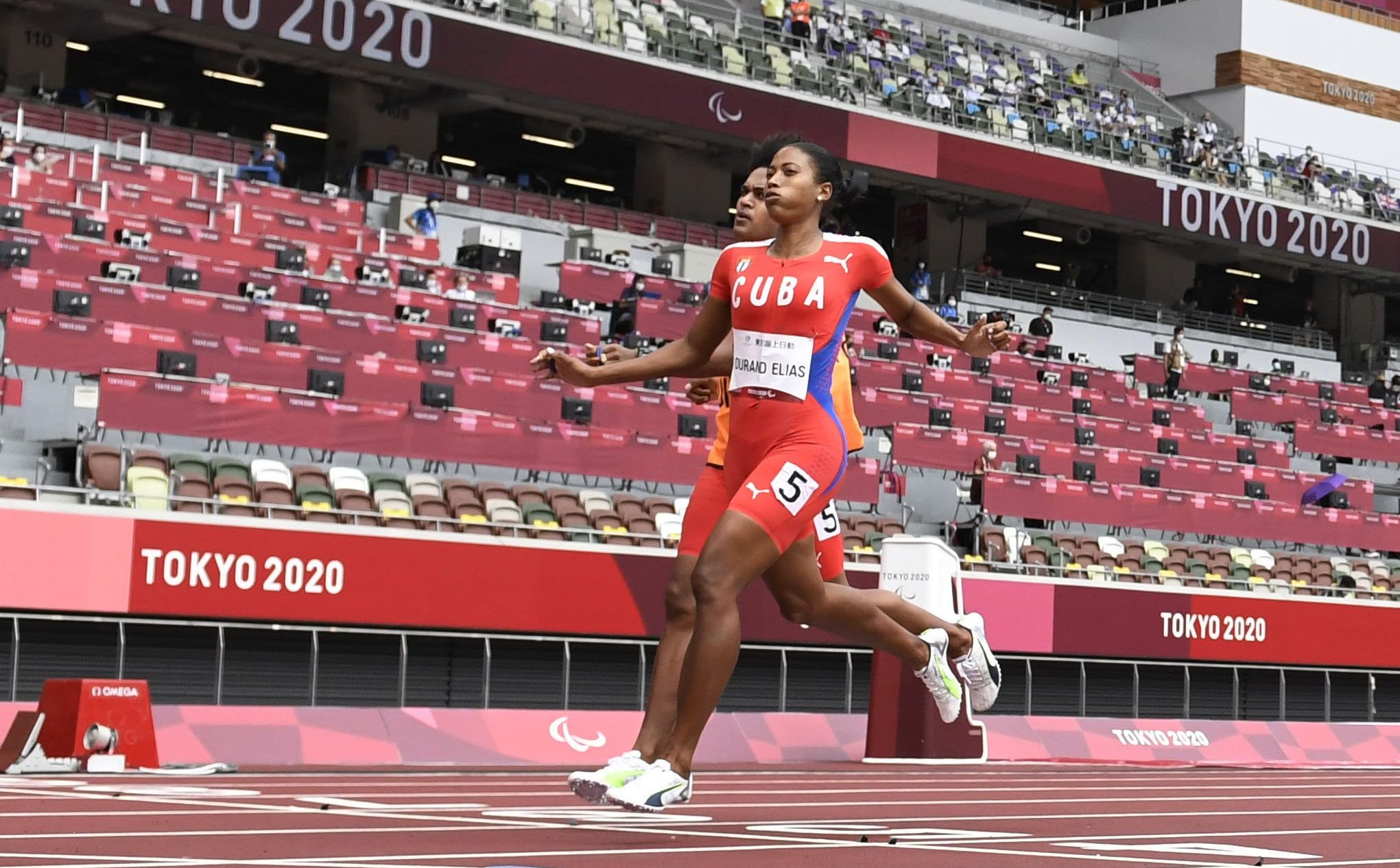 Cuba’s Omara Durand Elias has enjoyed unparalleled success for more than a decade.

Cuba’s Omara Durand Elias is one of the world’s most consistent athletes.

The proof is in the numbers. She’s unbeaten in major championships for the last decade and she’s won six gold medals in her six Paralympic events entering this September.

The “Queen of Speed” picked up her sixth gold by winning the women’s 400-meter final in the T12 category (for athletes with a visual impairment) with a time of 52.58 seconds and adept support from her longtime guide, Yuniol Kindelan Vargas, on Tuesday, August 31 at the New National Stadium.

“I was very nervous before the competition but after finishing the race, I am very satisfied," the 29-year-old told reporters after the race, according to Olympics.com.

“It’s very normal [to feel nervous] every time we compete. Always I am thinking how to win, and maintaining a positive feeling.”

That feeling remained the next day.

Durand ran a season-best time (11.70) in her first-round heat in the 100 meters to signal her presence as the clear-cut favorite to defend her title at the Tokyo Paralympics in the evening on Thursday, September 2.

It was a vivid reminder that she focuses more energy looking ahead to her next race or her next competition instead of dwelling on what she’s already achieved. Which happens to be a great deal.

Since 2011, the Cuban sprinter, whose vision impairment was caused by cataracts, has been a constant success story, in both the International Paralympic Committee’s Athletics World Championships and the Paralympics, as well as other competitions.

Durand was just getting warmed up.

She hauled in first-place medals from the 100, 200 and 400 in the T12 category (which indicates a stronger vision impairment than T13) at the 2015 IPC worlds in Doha. Her eyesight diminished further before she gave birth to her daughter, Erika, in 2013.

Since then, Durand has competed exclusively in the T12 classification.

Adding to her legend, she won the only event she competed in at the 2017 worlds in London, the 400.

A year earlier, Durand lived up to her reputation as the fastest female Paralympian in Rio de Janeiro. She outsprinted all opponents in the 100, 200 and 400. She also set a world record in the 100 (11.40 seconds) that still stands. The IPC named Durand the Best Sportswoman of the 2016 Paralympics.

Success on the track is something Durand is extremely grateful for.

She doesn’t take her achievements for granted. Instead, she cherishes every victory.

“It has been 10 years without losing and this is something amazing,” she commented in an interview with Olympics.com. “It makes me prepare stronger every day to maintain my status. It is always exciting and any competition gives nerves. What I do is relax, talk with my friends [and] listen to music.”

Preparations for the Tokyo Paralympics included a set of challenges that were not typical for Durand.

In normal times, she relies on the constant presence of her guide, including for directional guidance during races. The global pandemic, however, forced her to adjust her training regimen.

“It has been an atypical year,” Durand told the Olympic news portal, reflecting on 2020 to the present. “COVID arrived and changed the life of the whole world, the Games were suspended, and a void fell in the sports world. I spent several months at home, but I never stopped training although without my guide. I did a lot of exercises to maintain muscle tone.”

A semblance of normalcy returned, though, as Durand made adjustments and started working with Vargas, her guide, again.

“Then I rejoined training with my guide,” she was quoted as saying by Olympics.com. “I was complying with the hygiene measures and social distancing and taking all the care, so I have been able to train with my guide and we have prepared very well and so far, we have not been infected.”

Along with good fitness, that partnership and quality training put Durand in a good frame of mind for the Tokyo Paralympics.

By every indication, Cuba’s Queen of Speed could extend her unbeaten streak in major championships by several more years.

Consider the streak one of the most amazing athletic accomplishments that hasn’t received major attention this century.