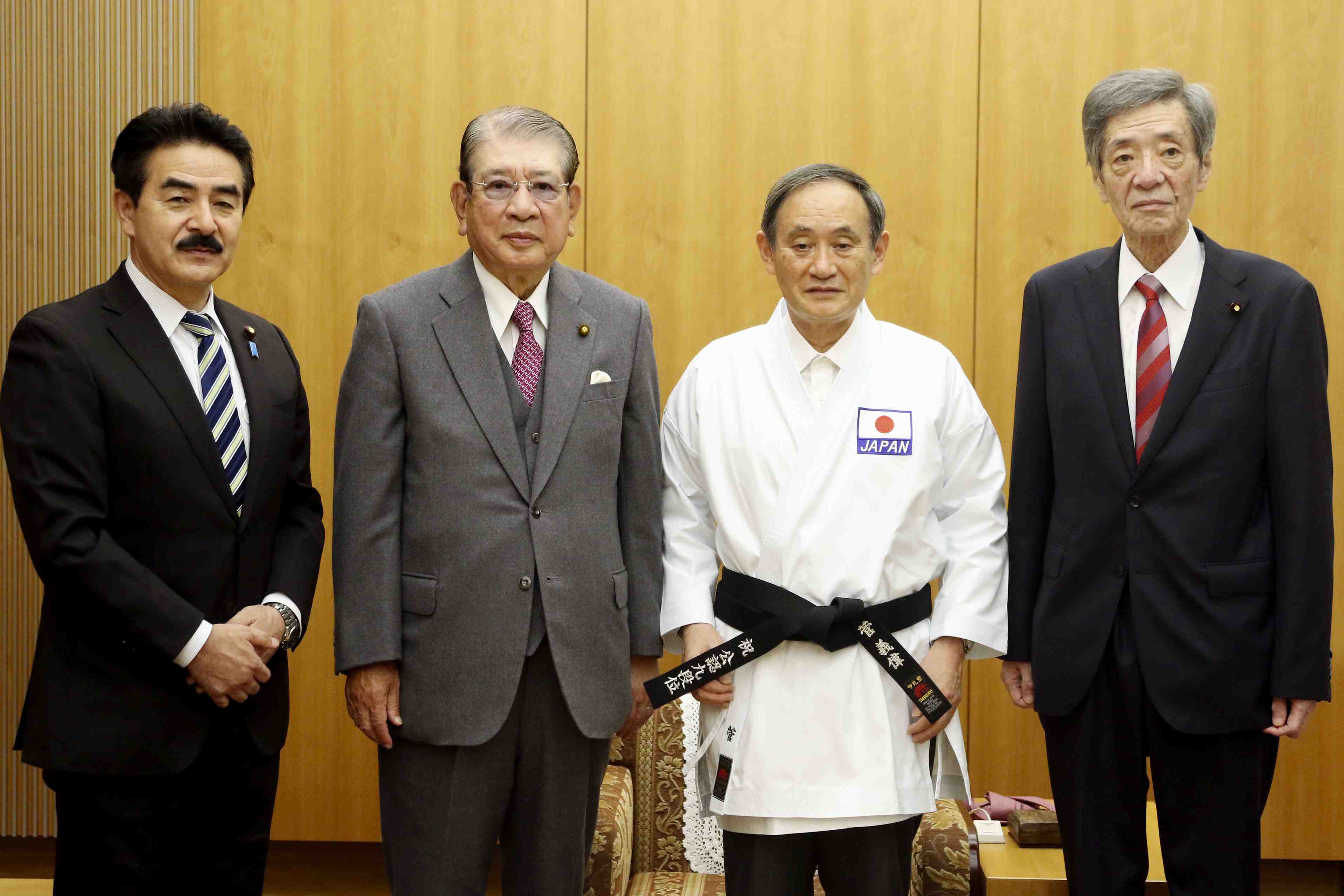 In contemporary times, Japan is teeming with a rich sporting culture. Options are aplenty for participants and spectators.

And with a wide array of choices for playing and watching, some sports will naturally rise to the top, with baseball and soccer being prime examples. So when a prominent figure expresses support for one of the so-called minor sports, it gives it a welcome boost of attention.

When Suga became Japan’s 99th prime minister in September, press reports about his background cited karate. The sport’s rigid rules helped shape give him discipline and focus a young man while attending Hosei University as a law student. (He graduated with a Bachelor of Law degree in 1973.)

And now, as the nation’s top leader, Suga has ample opportunities to express his fondness for karate and to speak about it with anybody,

While the 71-year-old’s main focus, of course, is day-to-day governing duties, who can blame him for shifting the conversation from time to time about the role of sports in his life?

After all, the Yuzawa, Akita Prefecture native enjoyed his experience as a member of Hosei’s Goju Ryu Karate Club, for which he served as vice chairman. One day while serving as the Chief Cabinet Secretary in former Prime Minister Shinzo Abe’s government (December 2012 until September 2020), Suga granted an interview to the Japan Karatedo Federation magazine that underscores this point.

“The things I developed through karate-do have served me well after I entered politics. I am keenly aware that the mental strength to endure difficulties was forged in the karate-do club,” Suga told the magazine in 2014.

More recently, he spoke to a global audience about the sport that he loves. The occasion? Commemorating the World Karate Federation’s 50th anniversary. The sport’s global governing body was, in fact, established in October 1970.

“We have the determination to hold the Olympic and Paralympic Games, Tokyo 2020, as a symbol of human resilience to overcome COVID-19.”

Recognizing that the unprecedented postponement of the Olympics coupled with the global pandemic are defining traits of this period, Suga went on to say, “This must be a unique opportunity to spread the values and traditions of Japanese martial arts to the world through the showcase of karate as a universal sport.” 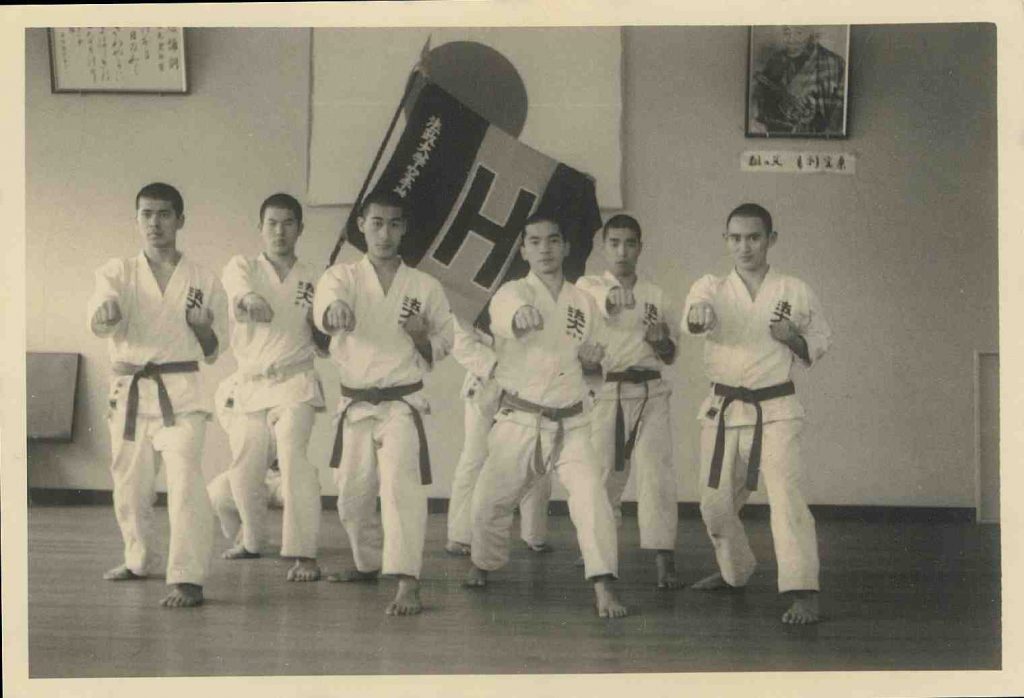 Karate as a Positive Force

Decades after his exposure to the sport during his formative years, Suga continues to spread the gospel of karate as a positive force in his upbringing as a young man — and by saying so, encouraging others to participate as well.

“I myself trained my mind and body in karate during my time at the university and this discipline has been a big support in my life over the years,” he declared.

Indeed, discipline plays a pivotal role in his life nowadays.

Suga maintains a daily workout regimen that includes 100 sit-ups each morning and 100 more each night. He also walks for 40 minutes each morning. 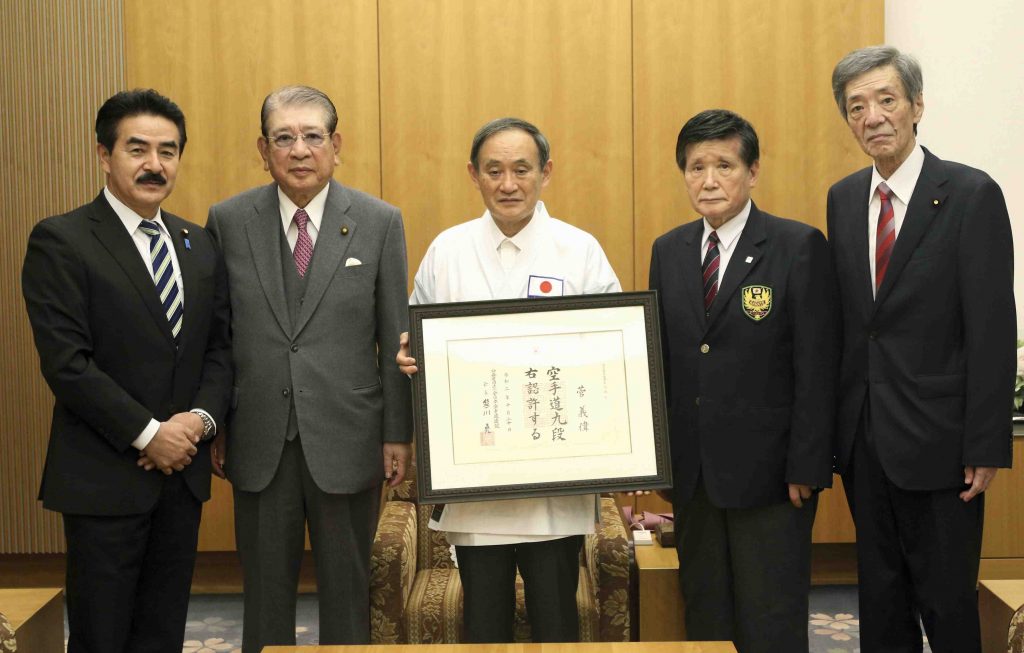 Meanwhile, his involvement in karate continues as one of the sport’s movers and shakers.

As organizational chairman, he also steered the Karate Promotion Parliamentary League, starting in June 2014, as it worked to gain the sport’s inclusion in the Tokyo Games.

Mission accomplished. In 2016, the International Olympic Committee named karate an Olympic sport for the 2020 Games, whose Opening Ceremony was pushed back to July 23, 2021.

Though he’s not in the running for medals in the Olympic karate tournament, Suga can beam with pride about what he’s accomplished over the years as a karateka.

Suga has put in the work to master the sport’s techniques. He’s a third-degree black belt.

But recently, he received greater prestige that’s connected to his official support for the sport and his lifelong involvement. The Japan Karatedo Federation officially made Suga a kyu-dan (ninth-degree) black belt, an honorary title, on Friday, November 20. Only higher on the hierarchical scale is a 10th-degree black belt.

Among contemporary politicians on the global stage, longtime Russian President Vladimir Putin is perhaps most identified with a single sport. For Putin, judo is a true passion. A kyu-dan judoka, he’s trained with the Russia national team and often used the sport as a geopolitical prop during his years in power. He’s also written a book about it (English title: “Let’s Learn Judo with Vladimir Putin.”)

Suga doesn’t need to publish a book on karate to remind everyone that he loves the sport.

In wrapping up his congratulatory message to the global karate community cited above, Suga said: “As a deep lover of karate, I look forward to witnessing the historic moments of Tokyo 2020 with all of you. On the occasion of the 50th anniversary, I wish the World Karate Federation all the success in its future endeavors and all the best for all the karate family.”