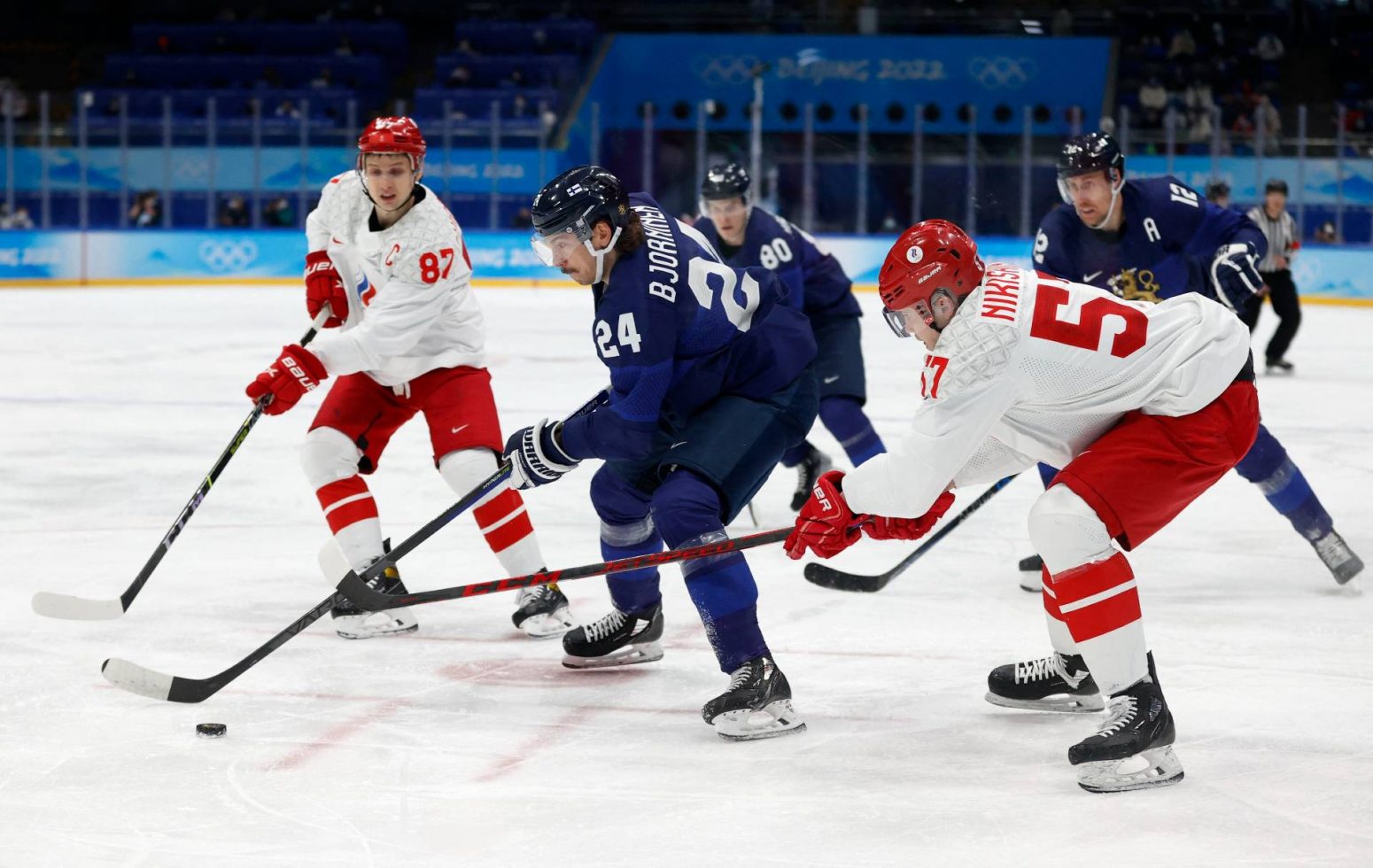 Finland's Hannes Bjorninen skates with the puck as Aleksandr Nikishin and Vadim Shipachev of the Russian Olympic Committee defend in the men's ice hockey final at the Beijing Olympics on February 20. (David W Cerny/REUTERS)

Finland edged the team representing the Russian Olympic Committee 2-1 to win its first-ever gold medal in men’s ice hockey on Sunday, February 20, the final day of the Beijing Olympics.

With the Games already tainted by yet another Russian doping scandal ― this time involving a 15-year-old figure skater ― few outside of Russia would be disappointed with the result.

Finland’s previous best finish was a silver medal at the 2006 Turin Games.

ROC took a 1-0 lead at 7 minutes, 17 seconds of the first period at National Indoor Stadium when Mikhail Grigorenko scored on a power play with a wrister from the left face-off circle that beat a screened Finland goaltender Harri Satari.

Finland tied the game early in the second period on a shot from the point through traffic by defenseman Ville Pokka.

Hannes Bjorninen gave Finland the lead for good with a wrist shot from the high slot that was deflected just 31 seconds into the final period.

Finland defenseman Juuso Hietanen had a golden opportunity to seal the win when he rang a blistering slap shot off the crossbar with just six minutes remaining in regulation.

The ROC desperately tried to find an equalizer and pulled its goalie in favor of an extra attacker with one minute remaining. But time ran out, touching off a wild celebration by Finland’s players.

The men’s hockey tournament at the Beijing Olympics was supposed to feature stars from the National Hockey League.

But when COVID-19 infections resulted in the postponement of many NHL games during the first half of its regular season, league officials decided they couldn’t stop their season for a two-week Olympic break.

That meant teams from North America were without players like Canada’s Sidney Crosby and Auston Matthews of the United States.

It also gave European teams, who rely more on players from their domestic leagues, an advantage. Both Canada and the United States were eliminated in the quarterfinals.

In addition to the gold in Turin, Finland had also won the silver in Calgary in 1988 and the bronze four times, with the most recent being in 2014.

The ROC was the defending champion. The Russians won in Pyeongchang when they were known as Olympic Athletes of Russia (OAR).

Former NHLer and Finland captain Valtteri Filppula handed out the gold medals to his elated teammates. Filppula also won a Stanley Cup with the Detroit Red Wings in 2008.

Russia is technically banned from the Beijing Games and other global sports competitions as a result of an earlier doping scandal, but individual athletes from Russia have been permitted to compete under the banner of the Russian Olympic Committee.

In December of 2019, the World Anti-Doping Agency barred Russia from international sports competitions after concluding it had run a state-sponsored doping scheme at the 2014 Sochi Winter Olympics.

With Francesco Friedrich behind the wheel, good things happen for German bobsleigh teams.

Friedrich completed his second golden double at the Olympics on Sunday at the Yanqing National Sliding Centre, winning the four-man bobsleigh final along with Thorsten Margis, Candy Bauer and Alexander Schueller.

He repeated his golden feats from the 2018 Pyeongchang Games, becoming the first bobsleigh driver to do so.

In the four-main final, Friedrich and his crew had the fastest overall time of 3 minutes, 54.30 seconds, which was calculated from four heats, two apiece on Saturday and Sunday.

Another German quartet, led by driver Johannes Lochner, nabbed the silver medal in 3:54.67.

Canadian driver Justin Kripps steered his team to a bronze-medal finish in 3:55.09.

Friedrich paid tribute to his teammates after collecting his latest glistening Olympic medal.

“We did it all to get here again,” Friedrich told reporters. “We did an amazing job these four years … without all the guys, it’s not possible to achieve such a moment.”

Jamaica, making its first appearance in a four-man race in the Winter Games since the 1998 Nagano Games, placed last (28th overall).

Johaug led from start to finish in the women’s 30-kilometer mass start race at the Zhangjiakou National Cross Country Skiing Centre. She crossed the finish line in 1 hour, 24 minutes, 54 seconds, and had time to sip a cup of coffee before the runner-up reached the end of the race.

Jessie Diggins of the United States earned the silver in 1:26.373, while Finland’s Jessie Diggins claimed the bronze in 1:27.27.3.

On a brutally chilly day (about minus 14 degrees C, or about 7 degrees F) with strong winds, the skiers battled the elements on the 7.5-km course.

“I’m born in a small place where there’s a lot of wind and a lot of cold temperatures in the region, so this was nothing for me,” Johaug was quoted as saying by The Associated Press.

Johaug was up for the challenge and earned an Olympic medal in the 30-km race for the second time. She was the silver medalist at the 2014 Sochi Games. She’s also the reigning world champion.

Previously at the Beijing Games, her other two golds came in the 10-km classic and the 7.5 km plus 7.5 km skiathlon.

With all events wrapped up on Sunday, the top spot belongs to Norway, first with 16 gold medals and 37 total medals. The Scandinavian winter sports powerhouse also grabbed eight silver and 13 bronze medals.

The Russian Olympic Committee is second in total medals (32), but the IOC displays nations in the final medal standings in descending order based on gold medals. The Russians have six gold, 12 silver and 14 bronze.

In addition to Team USA, Austria and the Netherlands also both won eight gold medals, tying for fourth-most.

Japan collected three gold, six silver and nine bronze. Its 18 medals put the Hinomaru sixth overall in total medal count, trailing only Norway, the ROC, Germany, Canada and the US.

With the doping case surrounding Russian Kamila Valieva’s participation in the figure skating team event and women’ singles event still pending due to an IOC investigation, the ROC could be stripped of medals in events she participated in.

Look for an upcoming review of Japan’s medal-winning performances here at this site in the coming week.