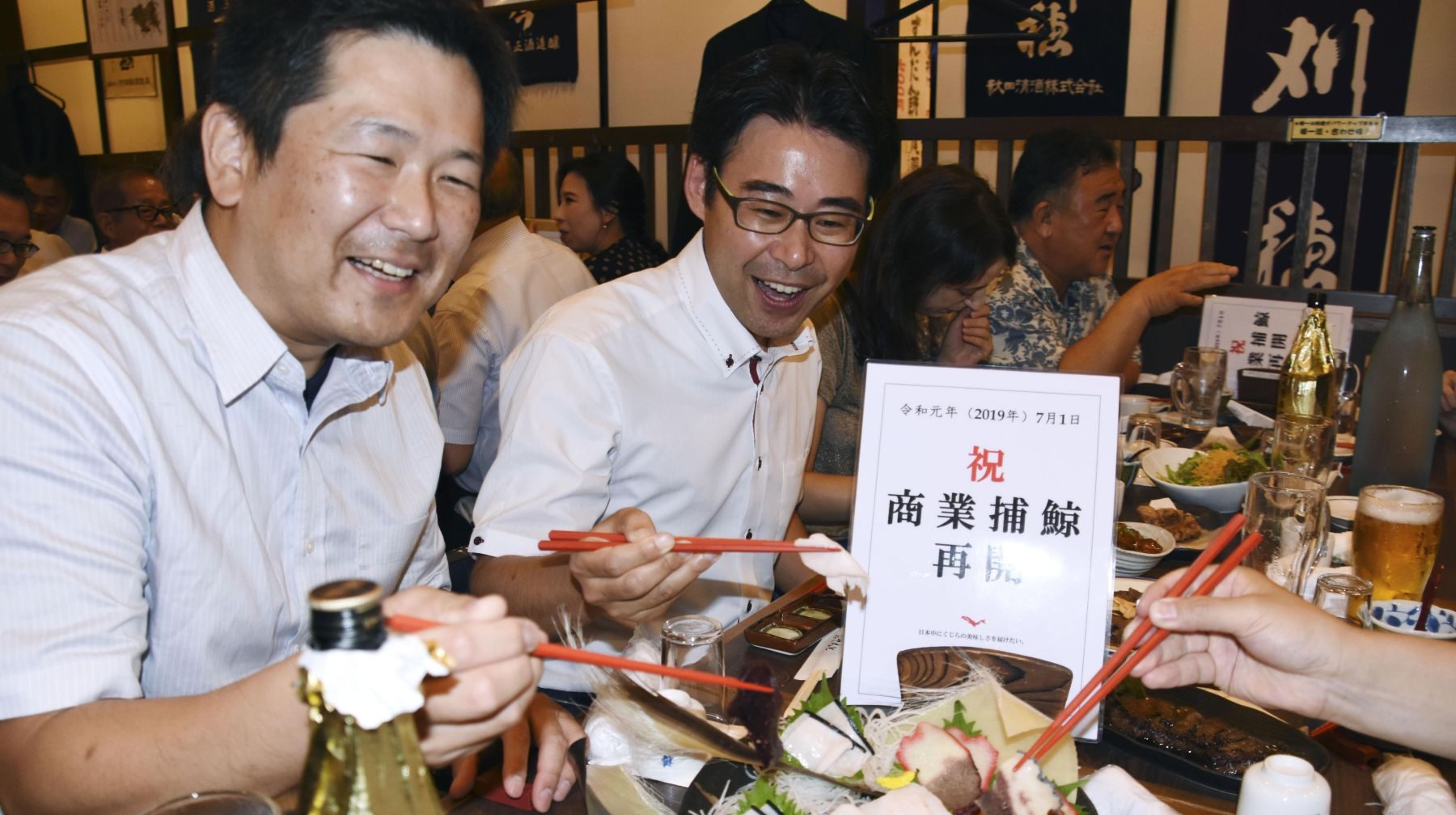 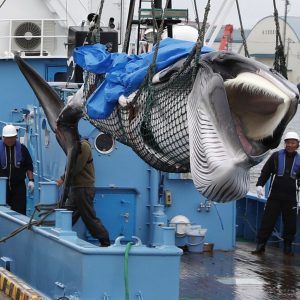 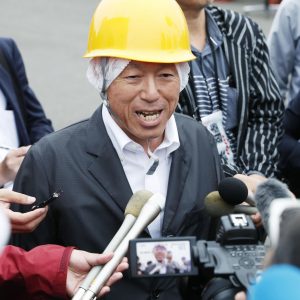 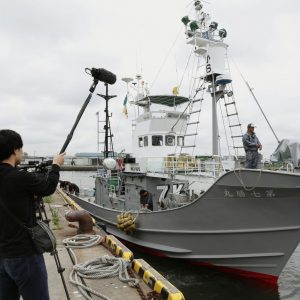 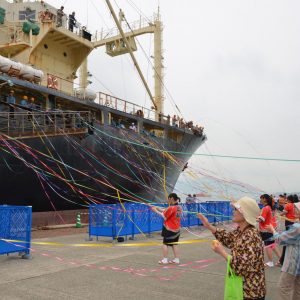 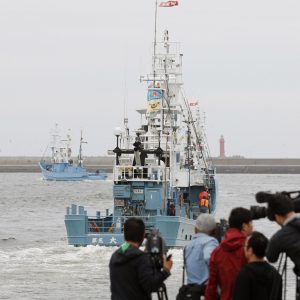 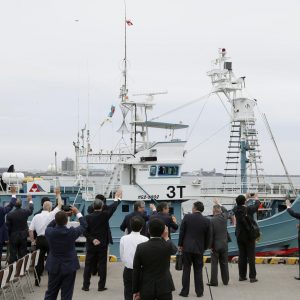 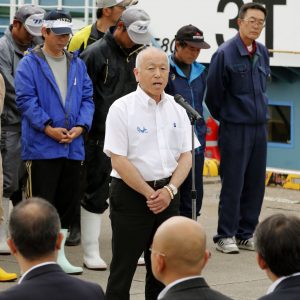 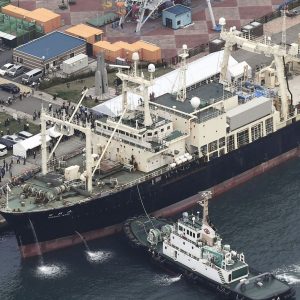 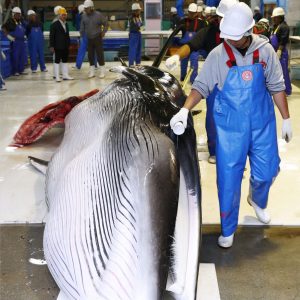 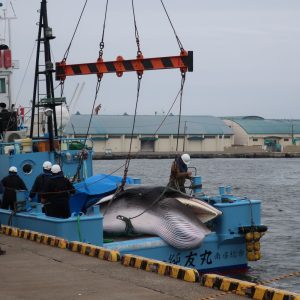 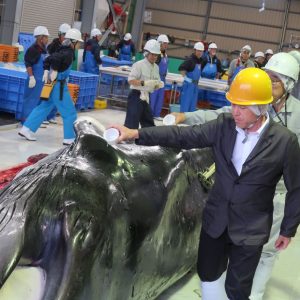 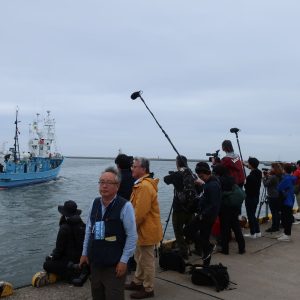 The five whaling boats chugged out into the bumpy waters off of eastern Hokkaido, a tiny armada under gray skies and the gaze of the world.

Each boat was as big as a city bus but far heavier, squat and armored against the sea, and powered by a boulder-sized motor and packed with all the things a modern whaling boat carries. They carried toothpaste and gunpowder and cup noodles and advanced radar rigs. They had cases of coffee and harpoons and sake and whiskey and gaff hooks and a dozen kinds of rope and first aid kits and colorful good luck flags.

And they carried the whalers themselves, some of whom stood on the flat flensing decks of the vessels, casually riding out the bucks and dips of the ocean and waving back at the docks.

The boats also bore the intense scrutiny of the international media.

The launch was not announced to the public, but the press had been invited. On shore, five dozen reporters from around Japan and the world filmed and snapped and jotted notes.

Some of the Japanese reporters waved back at the whalers, but none of the foreign reporters did. Nor did the British activists that had come to quietly record the event.

Minutes before, in a short ceremony to send off the fleet, the 29 whalers had assembled on the dock in front of their boats. As they shifted uncomfortably, a gruff phalanx in track suits and gumboots, a series of politicians and officials had addressed them in front of the cameras, offering their support in a series of rapid-fire mini-speeches.

Most of the national and international media picked up the words of Yoshifumi Kai, the head of both the Japan Small-Type Whaling Association, and the Fisheries Association of the small town of Taiji in Wakayama Prefecture, which operated one of the whaling boats, the Katsumaru.

“My heart trembles with joy at the restart of commercial whaling. I cannot fully express my gratitude,” he said. His comments were later reproduced on television sets and newspapers around the world.

Kai’s words were chosen over those of the powerful national Diet members in attendance, who praised the whalers, decried foreign criticism, and offered the traditional Japanese “Ganbare!” support for new and challenging endeavors.

Whaling has become a rare issue in Japan with backing from across the political spectrum — even the pesky minority parties, usually eager to criticize the powerful Liberal Democratic Party, have lined up in their public support.

After 30 minutes of speeches and congratulations, the whalers were offered bottles of sake for good luck, then scrambled aboard their boats and headed out in choppy seas. The assemblage watched from shore as the small procession disappeared behind the tsunami walls of the harbor, then began to disperse.

The dock filled with the sounds of mechanical camera tripods collapsing and equipment bags zipping. Some reporters called in their stories on mobile phones, while others sat right down on the concrete and punched them out on laptops.

“This is…quite a scene,” said one of the activists, a committed anti-whaling campaigner, trying to digest the whole thing.

“It’s such a great day for our country!” a reporter from a conservative newspaper whispered to me just after.

The politicians and officials left, and the journalists began to wait — it was not a good day for whaling, with the rough seas and cloud cover. And the ceremony meant the whalers hadn’t left until almost 10 A.M., long past their normal 5 A.M. departure. But one never knew.

A few hours later, word spread — the Sumitomomaru, out of Chiba Prefecture, had caught the first whale 42 kilometers out. It was a large minke whale, over eight meters long.

Soon after word came that the Katsumaru out of Taiji had also caught a minke.

In the early evening the press began to reassemble on the windy and quickly cooling dock, and after several false sightings, the Sumitomomaru appeared in the harbor, the whale on its rear deck, its mouth agape, pleated throat sagging and rows of baleen exposed. A crane lifted the carcass onto the bed of a truck, which sped off toward a nearby warehouse, a fleet of reporters in rental cars following behind.

At the warehouse, the whale was pulled down a ramp. Researchers carefully measured its length from jaw to tail. And then the flensers and whaling officials walked around it in single file, pouring sake over it from small cups, carefully avoiding the large harpoon jutting out of its back.

The press was allowed to film and photograph these proceeding through a narrow door, and pushed forward to capture the moment, but then a large shutter was pulled shut to block off the actual carving.

A Diversity of Media Coverage

In the hours and after, the headlines and video clips ricocheted around the globe, and as always whaling proved to be a sort of Rorschach test for those who cover it.

“The light of whaling is relit,” declared the Sankei newspaper.

“Japan restarts whaling for the first time in 31 years. But doubts remain about the economics, as expectations mix with uncertainty,” said Asahi TV.

Internationally, the reaction was more questioning.

“Is Japan killing whales for national pride?” asked CNN in large font on its website.

“Japan resumes commercial whaling. But is there an appetite for it?” queried the New York Times on its front page.

At the End of the Day

Later that night in Kushiro, the city where the whaling boats are based, the reporters gathered with the officials and politicians in izakayas and restaurants. They watched their coverage as it appeared online and on TV, joking when someone they knew slipped into view or made a statement.

On the boats, the whalers came back from their daily trip to the public baths, poured a few drinks, and bedded down on their small metal bunks, as the first day of the new whaling season came to a close.

(Click here to read additional coverage on whaling in Japan.)