“The International Community must Closely Coordinate Policies and Take Strong Action against The DPRK.” 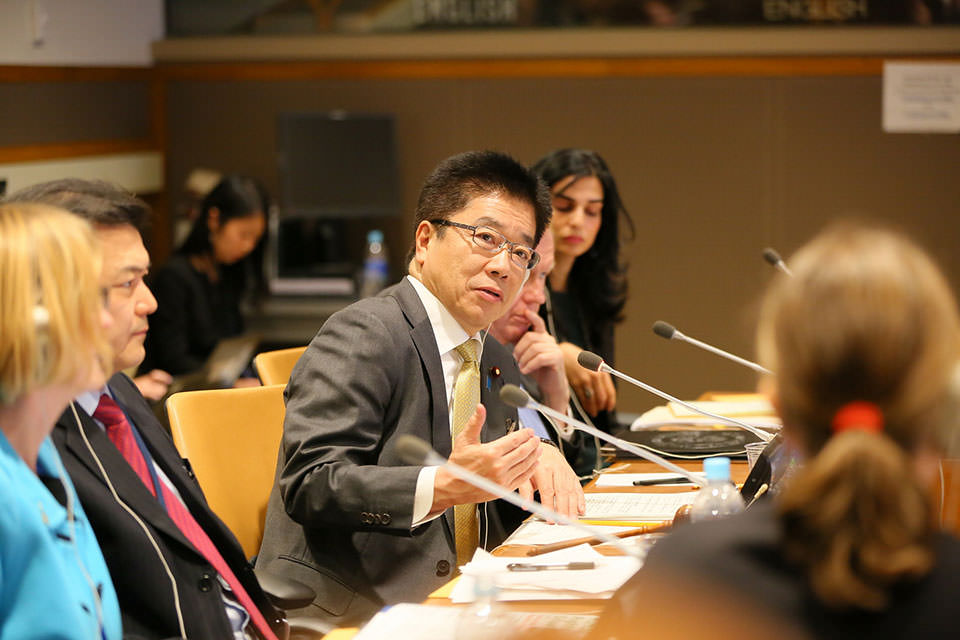 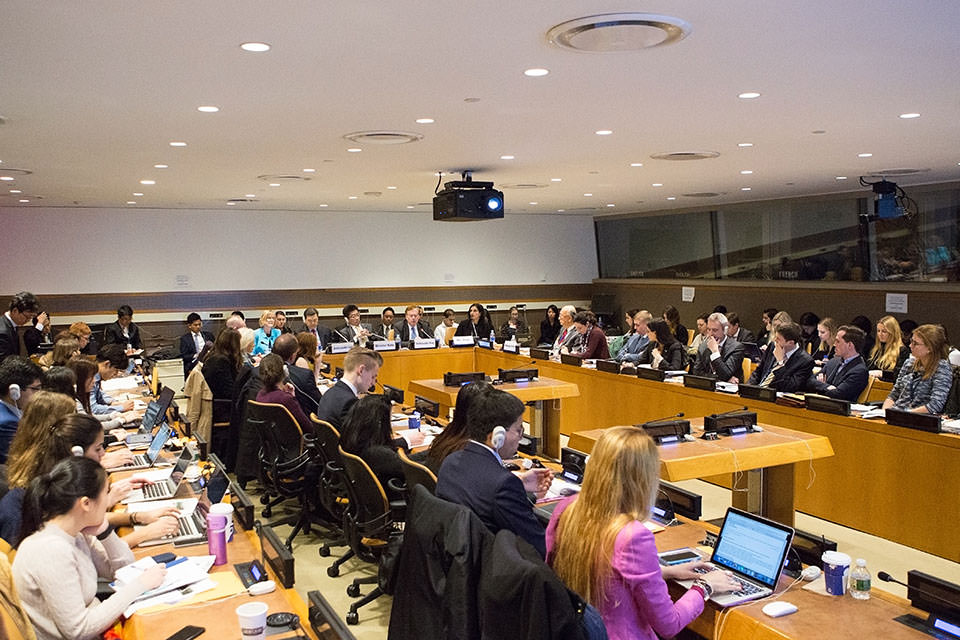 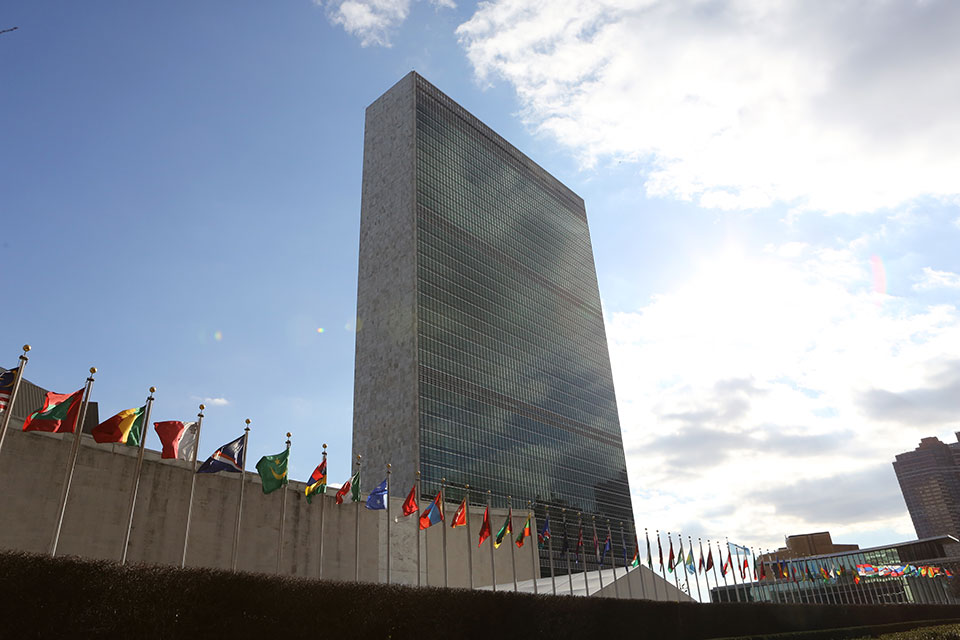 After decades of defiance, abductions, and provocations, the international community’s patience with the Democratic People’s Republic of Korea seems finally to have run out.

On Wednesday, November 30th, the United Nations Security Council unanimously adopted Resolution 2321, imposing the most restrictive sanctions in North Korea’s history on the regime in response to the North’s nuclear test on September 9th. With exceptions for humanitarian efforts and with an eye to attenuating the impact on the North Korean people, the sanctions hit North Korea’s mineral exports, imposed travel bans, froze assets, called for the closing of North Korean bank accounts in foreign countries, and virtually eliminated all imports to the North, especially materials used for nuclear and military proliferation.

While the People’s Republic of China has blocked such measures in the past, China also voted in favor of Res. 2321. China also noted that “certain parties”—an obvious reference to the United States—“had increased their military presence and scaled up military exercises on and around the Korean Peninsula, thereby intensifying tensions.” 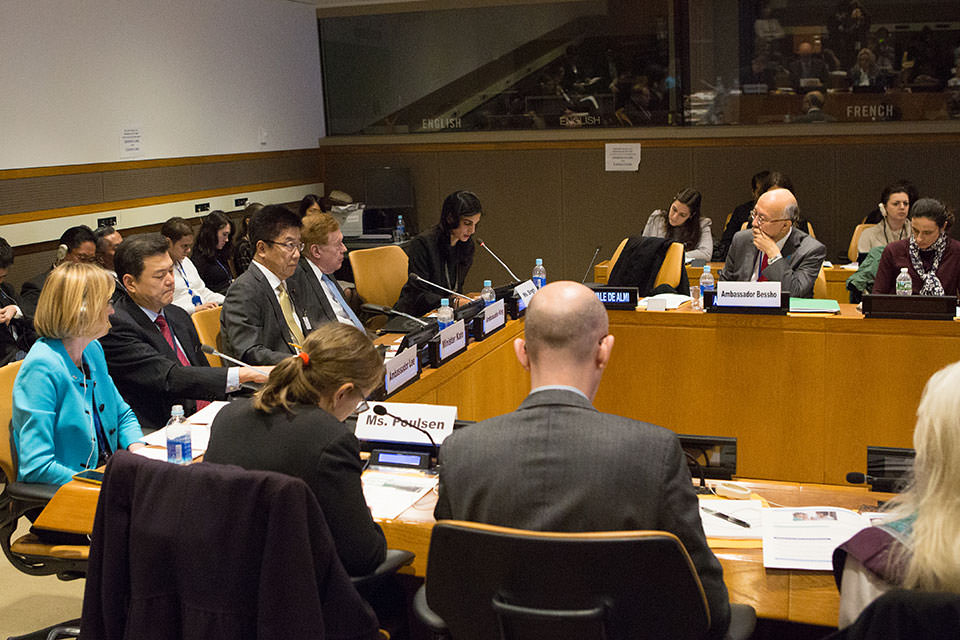 But perhaps the clearest signal that the international community is prepared to ratchet up the pressure on North Korea far beyond former levels came the following day, on December 1st. At a United Nations panel discussion on the human rights situation in the DPRK, co-hosted by Japan, EU, Australia, South Korea, and the United States, several of the invited experts indicated that North Korea’s human rights violations—including its large-scale abduction from many countries around the world—must be understood in the context of security threats that North Korea poses. In fact, some expressed concern about the impact of diverting resources to advance nuclear weapons and ballistic missiles programmes on the humanitarian and human rights situation of the citizens of North Korea. 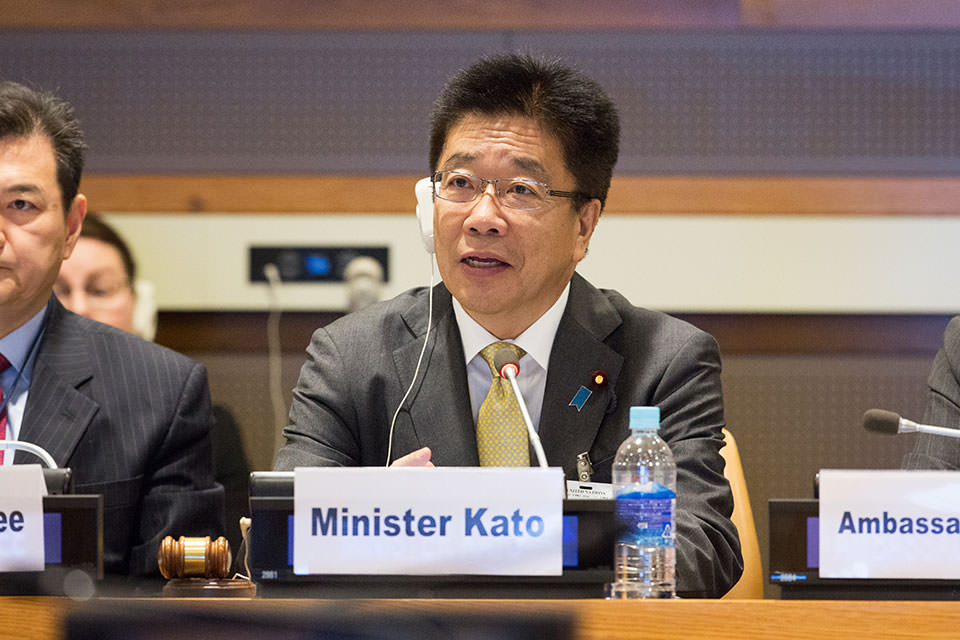 As Mr. Katō Katsunobu, the Minister in Charge of the Abduction Issue of Japanese Government and the head of the panel discussion, stressed in his remarks, “the issue of abductions committed by the DPRK is a matter of great concern that undermines the sovereignty of countries concerned and the lives and safety of their citizens. At the same time, the issue is a grave matter in terms of human rights and humanitarian concerns as the abductees’ precious future and the invaluable bond with their families have been taken away. ” Minister Katō also pointed out that “Resolution 2321 is the first time that a Security Council resolution regarding the DPRK expresses in an operative clause its deep concern over the grave hardships that the people in the DPRK are subjected to.” This link between security and human rights was the centerpiece of the Dec. 1st panel discussion, and represents a surprising new departure in the ongoing efforts to find some response to North Korea’s decades of lawlessness.

“As the Resolution demonstrates,” Minister Katō continued, “the international community must closely coordinate policies and take strong action against the DPRK.” 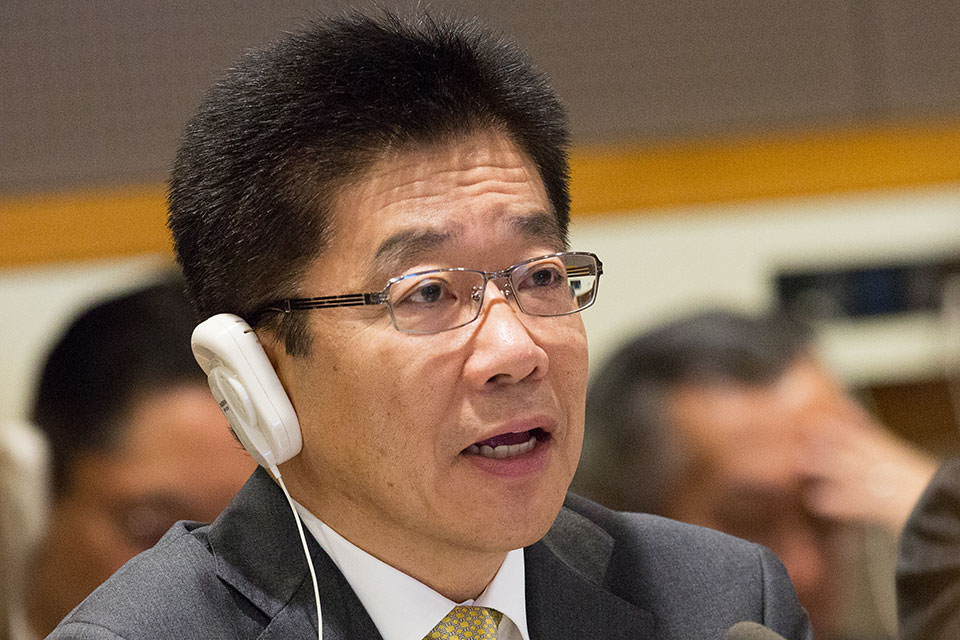 This resolve was echoed by Ambassador Lee Jung-hoon, the Ambassador-at-Large on North Korean Human Rights for the government of the Republic of Korea. Amb. Lee called attention to the “coupling effect” produced by Res. 2321, and emphasized that it was no longer enough to list North Korea’s crimes. The time has come to “do something about it,” Amb. Lee remarked. 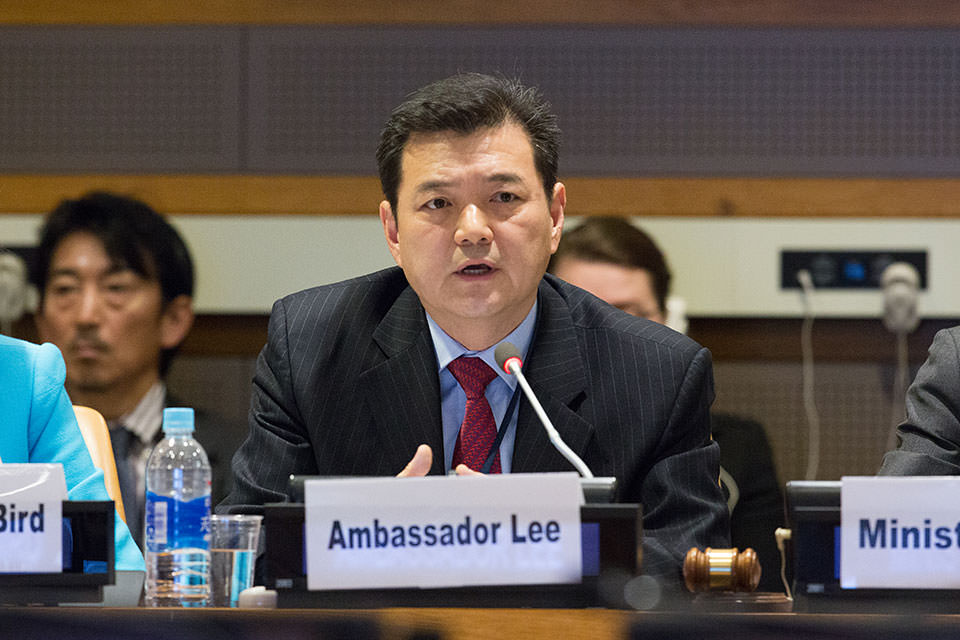 In a symposium on North Korean human rights violations in May of 2016, Amb. Lee spoke about the North Korean laborers who are forced to work abroad in order to earn money for the North Korean state. At the Dec. 1st panel discussion, Amb. Lee returned to this topic, saying that this practice amounted to “slavery” and should be stopped, both for the sake of the approximately 120,000 laborers and in order to deprive the North Korean regime of between 400 million and 2 billion dollars per year in hard currency. As positive developments in this regard, Amb. Lee noted that Poland and Malta no longer issue working visas to North Koreans, while Qatar has also begun turning DPRK laborers away.

Amb. Lee singled out China for criticism, however, saying that the Chinese response to the DPRK would be a “key litmus test” for the PRC’s ability to engage in global leadership.

Going forward, Amb. Lee said it would no longer be possible for any country to separate North Korea’s human rights violations from other business or cultural transactions. Amb. Lee called on the international community to suspend all sports, cultural, and commercial relationships with the North, just as the United Nations General Assembly had done with South Africa in 1968 over apartheid.

The plainest, and broadest, statement of the “coupling effect” produced by Res. 2321 and stressed by Min. Katō and Amb. Lee came from Ambassador Robert King, Special Envoy for North Korean Human Rights Issues for the United States government. 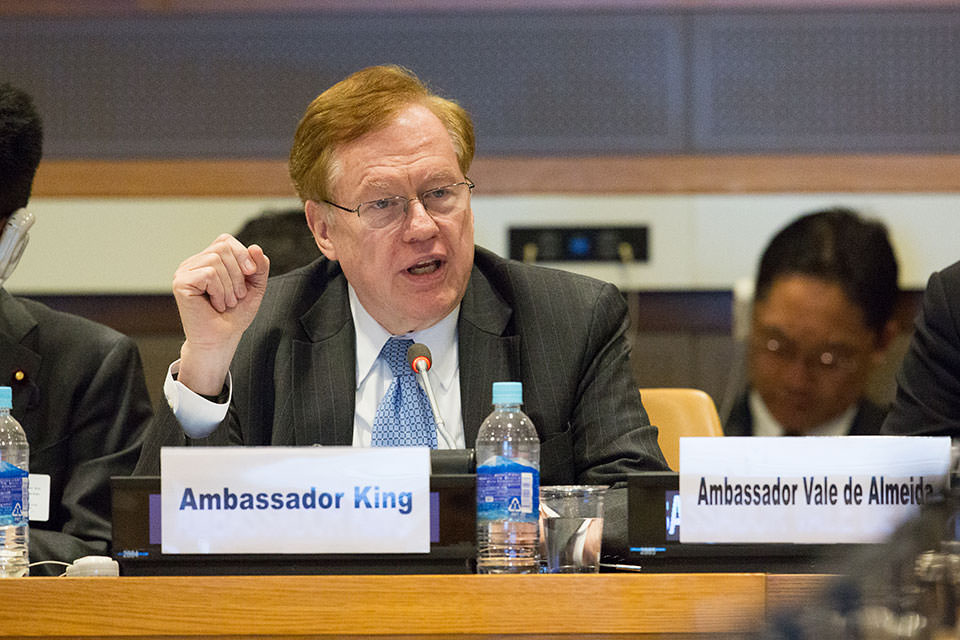 In his remarks, Amb. King—who, like Amb. Lee, had also spoken at the May symposium on North Korean human rights violations—said that a country that oppresses its own people will have fewer qualms about warring against its own neighbors.

Amb. King stressed that human rights issues tend to be treated separately from security issues, but that the link between the two should be considered. 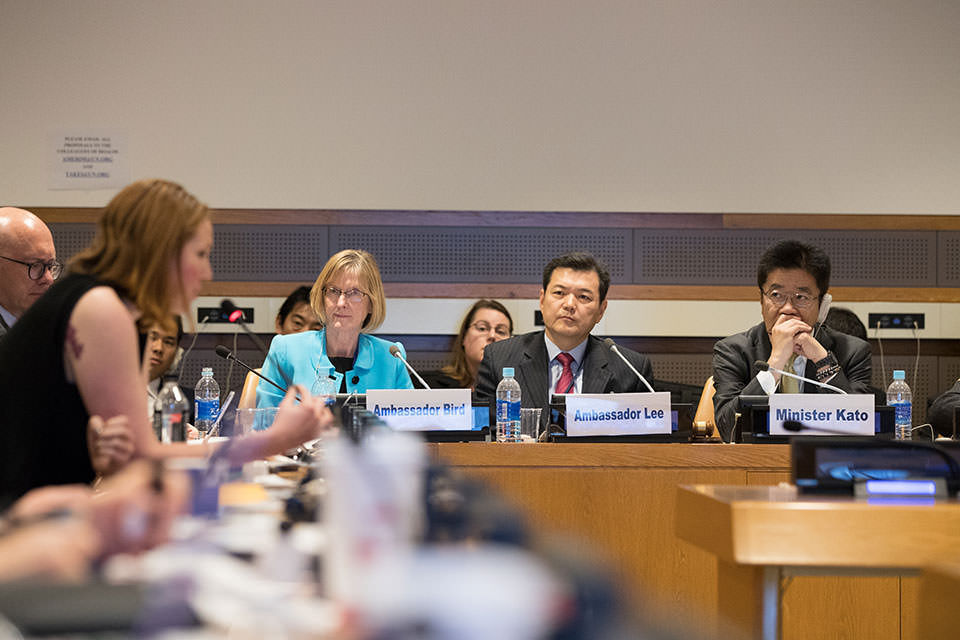 In a question following the panel presentation, Thomas De Luca, a political science professor at Fordham University, asked Amb. King to clarify the assertion of this link. In particular, Prof. De Luca asked Amb. King if states such as North Korea, whose human rights violations Amb. King suggested constituted a security threat, would be less likely to follow nuclear deterrence guidelines, and whether such states should be prevented from obtaining nuclear weapons “by force, if necessary.”

“I don’t think you actually have to resort to the use of force to rein in North Korea,” Amb. Lee said in reply. “If we can somehow convince China to get on board in these sanctions mechanisms, then it won’t be necessary to use the military to achieve results. I believe firmly that if China decided to really enforce the sanctions mechanism, shut down on the food and energy flows to North Korea, I just don’t see how the regime can last for longer than half a year, at best.”

“Better ways have to be found,” Amb. Lee added, “to get China on board in pushing North Korea to abide by the Resolution’s stipulations.”

Amb. Lee and Amb. King both stated that there is a new urgency in North Korea’s responses to international pressure, because, while the North Koreans insist that the nuclear issue is a matter of national security, the human rights issue is becoming a source of embarrassment and inconvenience for the North.

Stressing that the international community has made extensive and multi-pronged efforts to engage with the North Korean government, Amb. Lee hinted strongly that China must now be the one to take the initiative in bringing the DPRK to the negotiating table.

“I think it is those countries that do have diplomatic relations [with] Pyongyang,” Amb. Lee added, “to continue to talk to North Korea, [but they shouldn’t be] ginger in dealing with North Korea. […] It’s very, very important to tell North Korea exactly what it’s doing wrong.” 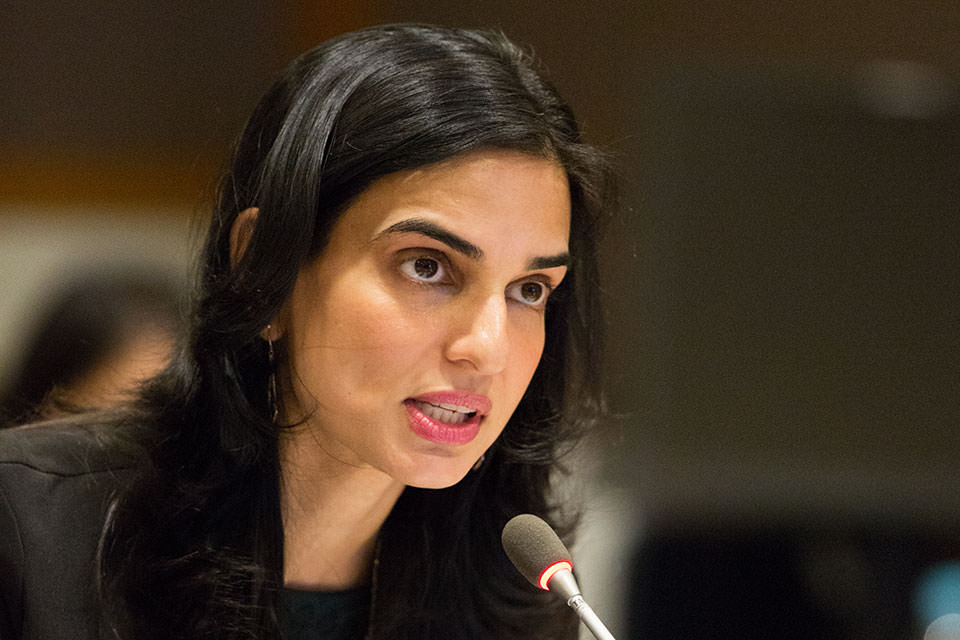 However, in earlier panel remarks Param-Preet Singh, the associate director of the international justice program at Human Rights Watch, indicated that referring the North Korean human rights violations to the International Criminal Court (ICC) would be a logical next step in increasing pressure on the North Korean regime. Identifying human rights violators for arrest, even if there was no immediate prospect of serving those warrants, would also bolster the hopes of the North Korean people, Ms. Singh argued. Ultimately, she added, it was important to keep in mind the eventuality of a truth-and-reconciliation commission in North Korea, where human rights abuses could be brought to light much as had happened in the wake of other failed dictatorial states around the world.

The Korean War never ended. Since 1953, an armistice, and not a peace treaty, has governed the uneasy cease fire along the 38th parallel. With the rise of Kim Jong-un after the death of his father, Kim Jong-il, the situation inside North Korea appears to grow more unstable by the day. North Korea’s increasingly reckless nuclear tests, and increasingly egregious human rights violations, do appear to be linked, as the Dec. 1st UN panel suggested. 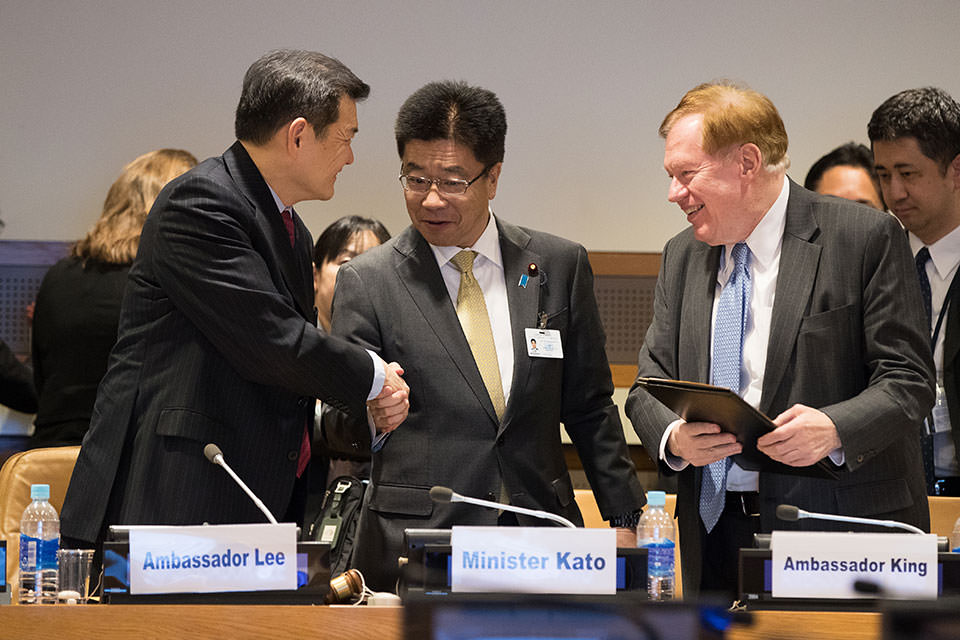 The challenges that lie ahead seem to be how to maintain this new, increased level of pressure on the North while also preparing for unbalanced, even chaotic, responses from the DPRK regime.

All Official titles cited in the text are as of December 2016.