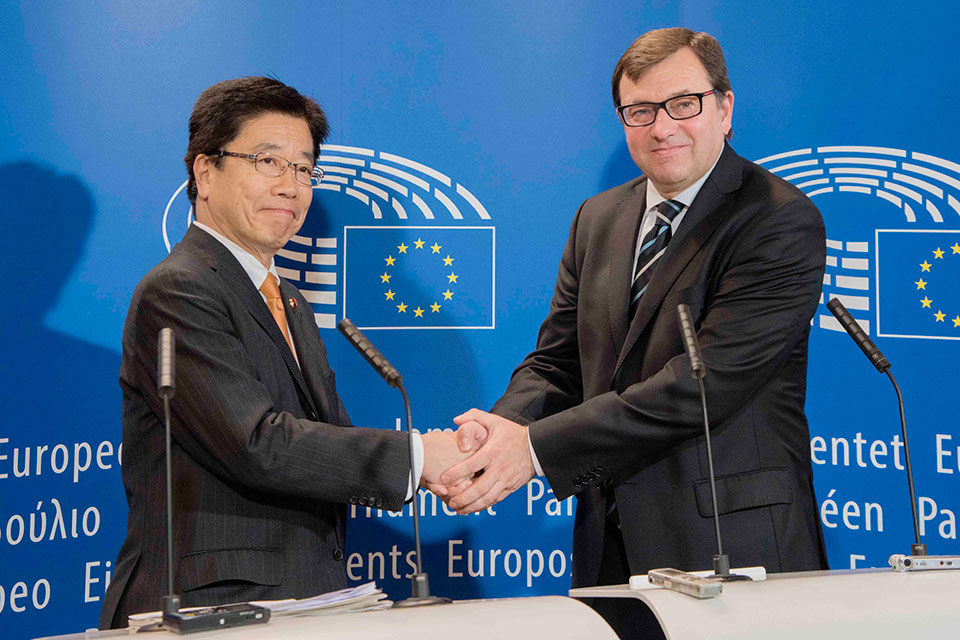 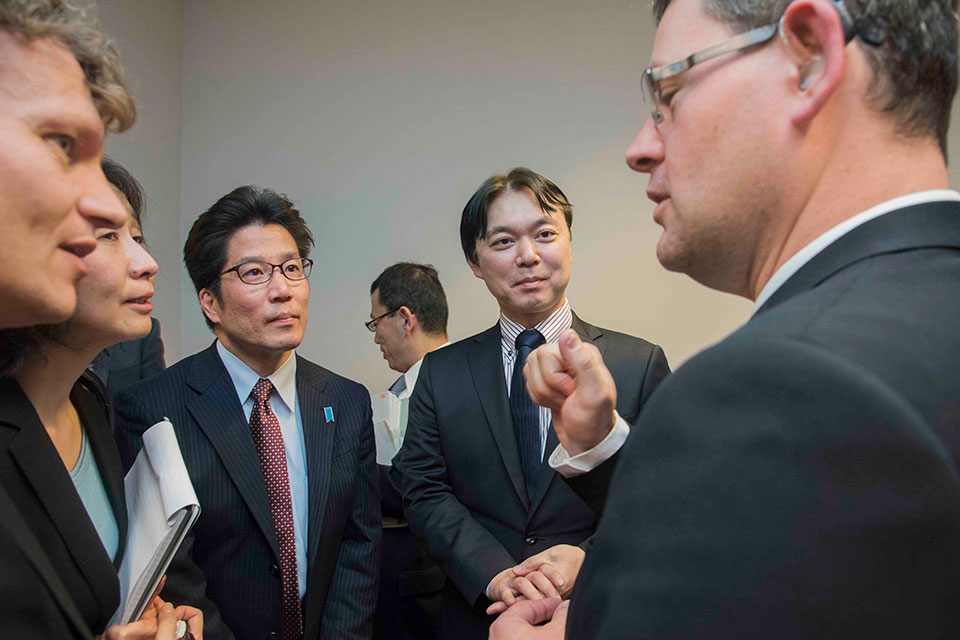 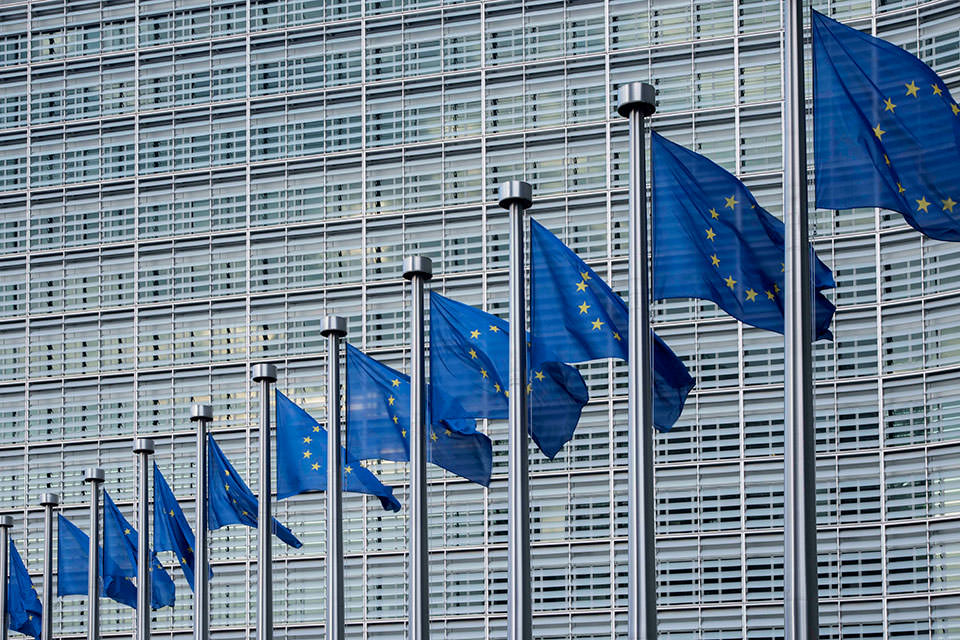 On May 4, 2017, a delegation led by Katsunobu Kato, the Minister in Charge of the Abduction Issue in Japan, visited the European Parliament in Brussels, Belgium. The delegation was in Brussels for a policy dialogue aimed at addressing the human rights violations in North Korea, including the North’s abduction of Japanese citizens.

The meeting marked the first time that the Minister in Charge of the Abduction Issue visited the European Union. Japanese and EU officials agreed to work together to resolve the abduction issue as quickly as possible. 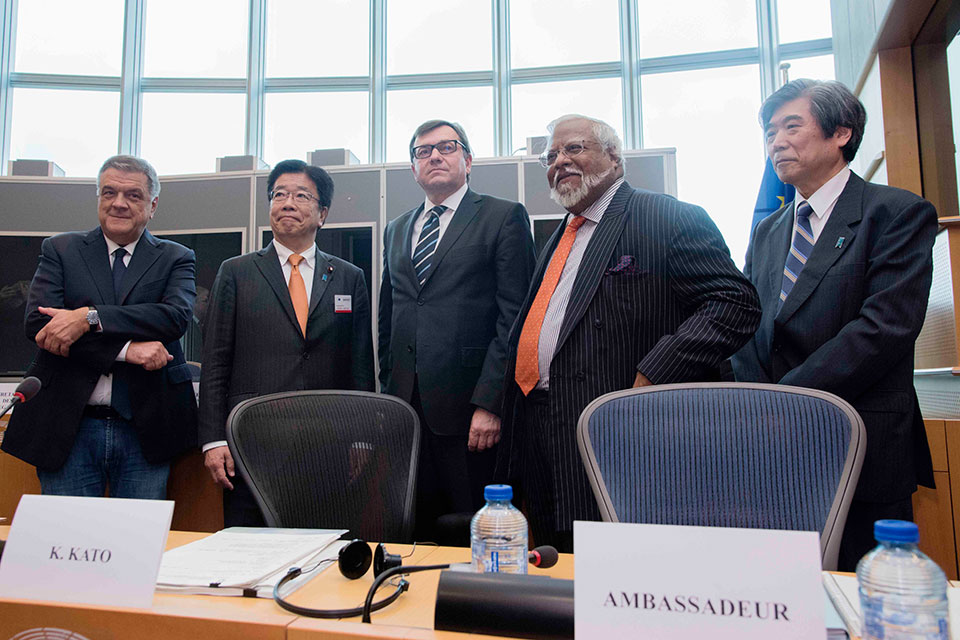 In the strongest remarks made by a Japanese delegation thus far, Minister Kato, reiterating the importance of resolving the abduction issues, said emphatically that there could be “no future” for North Korea should it choose to continue on its present course. 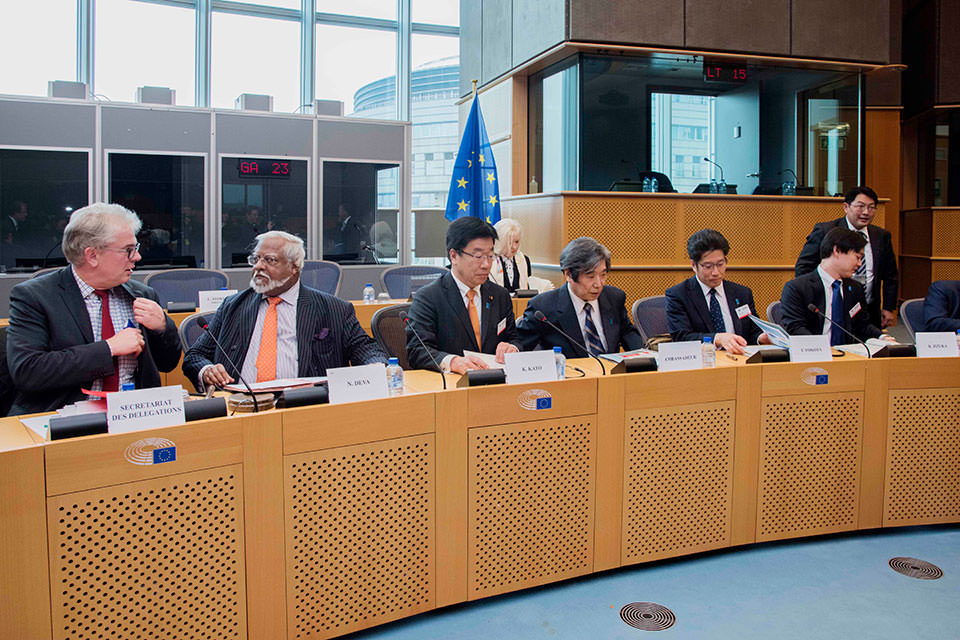 Minister Kato has often visited the United Nations as part of a concerted drive to secure the quickest possible return of all Japanese abductees. Minister Kato’s participation in an European parliamentary session marked the opening of a new front in Japan’s ongoing efforts.

While Japan’s Prime Minister Shinzo Abe has worked to establish strong bilateral relations with US President Donald J. Trump—relations made all the more important by the deteriorating security situation in and around North Korea—Minister Kato’s arrival in Brussels showed the Government of Japan’s intention to promote partnership with the international community, and in particular with the European Union, in order to resolve the abduction issue. The EU has partnered closely with Japan for more than ten years by co-sponsoring UN resolutions on the human rights situation in North Korea.

Minister Kato emphasized the importance and urgency of resolving the abduction issue in light of the tense situation on the Korean Peninsula caused by North Korea’s provocations.

Chairperson Ježek opened the meeting by framing it in terms of Japan’s strong and long-standing support for the European Union.

Ježek noted his delight that Minister Kato met with EU President Tajani, thus underscoring the importance the European Parliament attaches to the issue of abductees as well as to the mutual relationship with Japan.

“[Japan is] a country which is likeminded to the EU countries in strongly promoting international law and multilateralism,” Ježek said, emphasizing the broad affinities between Japan and the EU member states.

MEP Deva then extended his own “very warm welcome” to the Japanese delegation. Deva pointed out that Minister Kato hailed from Okayama, Japan, a place so beautiful that it should be known as “the Garden of Eden of Japan.”

“But as you all know,” MEP Deva went on, “the path from paradise to hell can be a short one, and it must be hell for what the families of the abductees have been going through ever since their beloved ones were brutally taken away from them. We feel very strongly about this,” Deva added.

European Parliament Human Rights Subcommittee Chairperson Panzeri was more interested in the criminal nature of North Korea’s actions. Chairperson Panzeri referred to the March, 2017 UN suggestion that an ad hoc tribunal be set up specifically on the abduction issue, with charges to be pursued in parallel to the abduction cases being brought before the International Criminal Court.

“Our subcommittee has paid much attention,” Panzeri said, “to the violations of human rights in the Democratic People’s Republic of Korea.” This subcommittee has also worked with the US and in other fora “to address the almost systematic violations of human rights in North Korea. We are ready and willing,” Panzeri said, “to work alongside our Japanese friends to bring truth to light and justice against these criminals.”

Continuing his remarks on North Korea’s criminality, Panzeri added that in March of 2017 independent UN experts recommended setting up an ad hoc international tribunal apart from the International Criminal Court.

“No Future for North Korea on Its Present Course”

In 2002, Japanese Prime Minister Junichiro Koizumi visited Pyongyang for a summit meeting with North Korean leader Kim Jong-il. At that meeting, Kim admitted for the first time that North Korea had abducted Japanese citizens and apologized for the abductions. Later, five of the abductees returned to Japan. After 2002, however, North Korea has failed to sincerely address the issue, even despite their commitment in 2014 to conduct comprehensive and full-scale investigations into the status of all Japanese citizens in the North. For three years, North Korea has offered no information whatsoever on this issue to the Japan side. 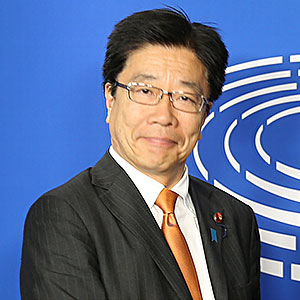 Emphasizing the increasing importance of resolving the abduction issue given the advancing age of the abductees and their families, Minister Kato asked the EU member states, most of which have diplomatic relationships with North Korea and seven of which have embassies in Pyongyang, to impress upon Kim Jong-un the gravity and futility of his ongoing refusal to release all of the abductees. Minister Kato stressed that Japan will make full use of the diplomatic channels available through interaction with the European Union to appeal to the North Korean leadership.

Failing to release the abductees, cease nuclear testing, and abandon ballistic missiles, Minister Kato said, would serve only to ensure that North Korea would be completely isolated from international society. On its present course, Minister Kato stressed, there can be no future for North Korea in the world.

The Personal Costs of the Abduction Issue 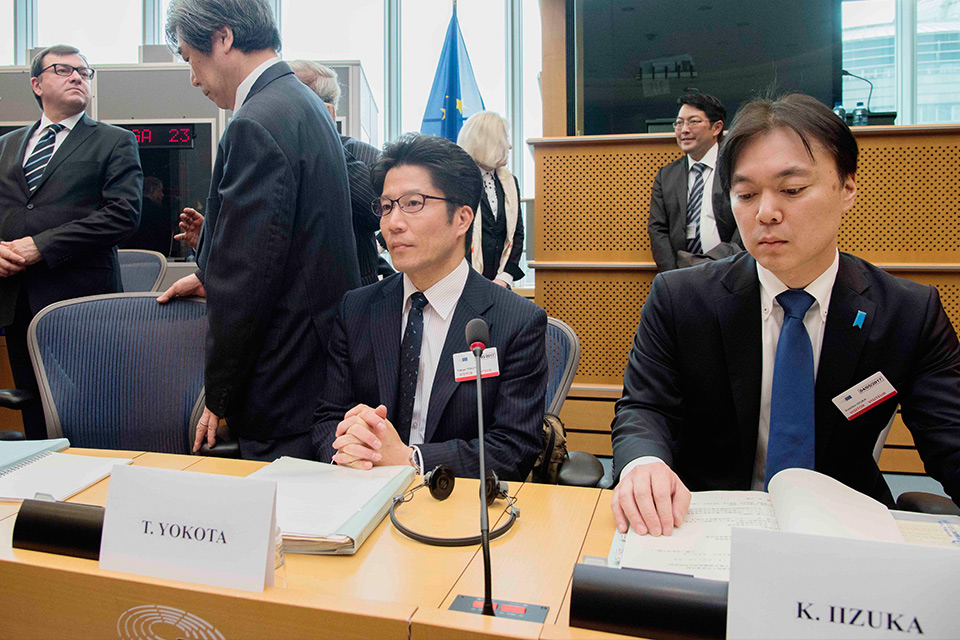 The most immediately effective appeals appeared to come from Mr. Yokota and Mr. Iizuka. Their personal remarks added a human dimension to the issue that other European Parliament members said had been lacking before. 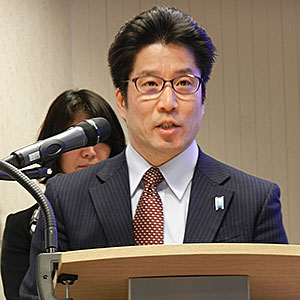 Mr. Yokota said that his sister, Megumi’s, “sudden disappearance completely changed our family life, which became heavy-hearted and void of conversation. […] For the first twenty years, our family was deep in sorrow, as no clue turned up, despite our persistent search.”

When it was finally learned that Megumi Yokota had been among those abducted by North Korea, the Yokota family was filled with hope, only to be cruelly disappointed when North Korea claimed—falsely—that she was dead, sending back bones which DNA testing proved were those of other people.

North Korea “violated the sovereignty of the state of Japan and its territorial waters,” in abducting Japanese citizens, Mr. Yokota continued. The hundreds of abductions they carried out are “unforgivable acts of evil.” In order to avoid further gross violations of human rights, such as the world witnessed at Auschwitz, “it is necessary for all the countries of the world to unite and urge North Korea to resolve the abduction issue.” 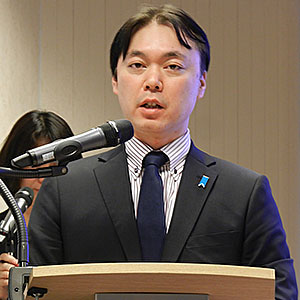 Mr. Iizuka also suffered a set of hardships. His mother, Yaeko Taguchi, was abducted when he was just an infant of one, and he has no memories of her. His only image of her comes from a single photograph taken shortly before she was kidnapped. The North Korean government lied in saying that Taguchi, too, had been killed—in a traffic accident—but the death certificate the North Koreans produced was a fake, and did not even contain Taguchi’s name.

On the night before the conference, an animé detailing the abduction of 13-year-old Megumi Yokota was screened at the Japanese Mission to the EU. The various members of the European Parliament expressed their sympathy for the abductees’ family members and support for the Government of Japan after the screening.

Moving on the EU Foreign Policy and Security Fronts

After the family members’ remarks, Ádám Kósa, a member of the European Parliament from Hungary, said through a sign language interpreter that, although he had long known about the abduction issue, it was not until he met Mr. Yokota and Mr. Iizuka in person that he really understood the “horrors” of the situation, or “realized what a breach of human rights this is.” Kósa urged the Japanese delegation to meet bilaterally with all of the EU member state parliaments, as they, too, would be “shocked” to learn of the true nature of the abduction issue.

In response to this, Minister Kato said that Japan was already pursuing bilateral responses, and was encouraged by the document issued after Prime Minister Abe’s visit with Donald Trump earlier this year, which marked the first time that the North Korean abduction issue was included in official text released following a summit meeting between a Japanese and other world leader. 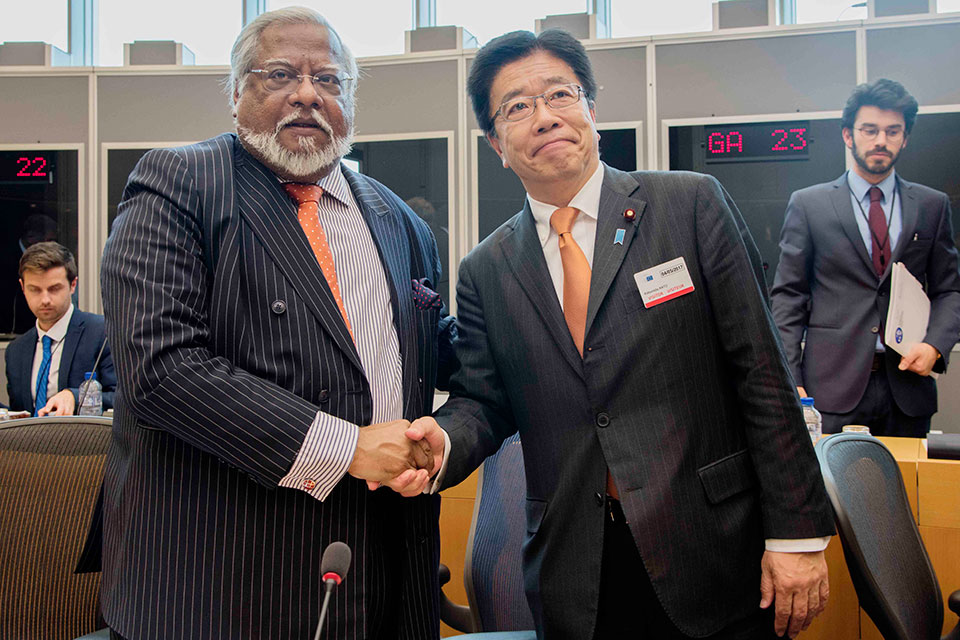 In response to a question from MEP Deva on the concrete steps Japan wished the EU to take, Minister Kato reiterated his call for member states to address the abduction issue directly with Pyongyang by means of their diplomatic contacts with North Korea.

Chairperson Ježek assured Minister Kato that he would write a letter on the issue to Federica Mogherini, the High Representative of the European Union for Foreign Affairs and Security Policy. MEP Deva, who is in contact with members of the North Korean government in his role as delegate to the Korean Peninsula, also promised to add the abduction issue to the agenda of his next meeting with the DPRK.

Urging North Korea to Engage in “Dialogue and Action for Action” 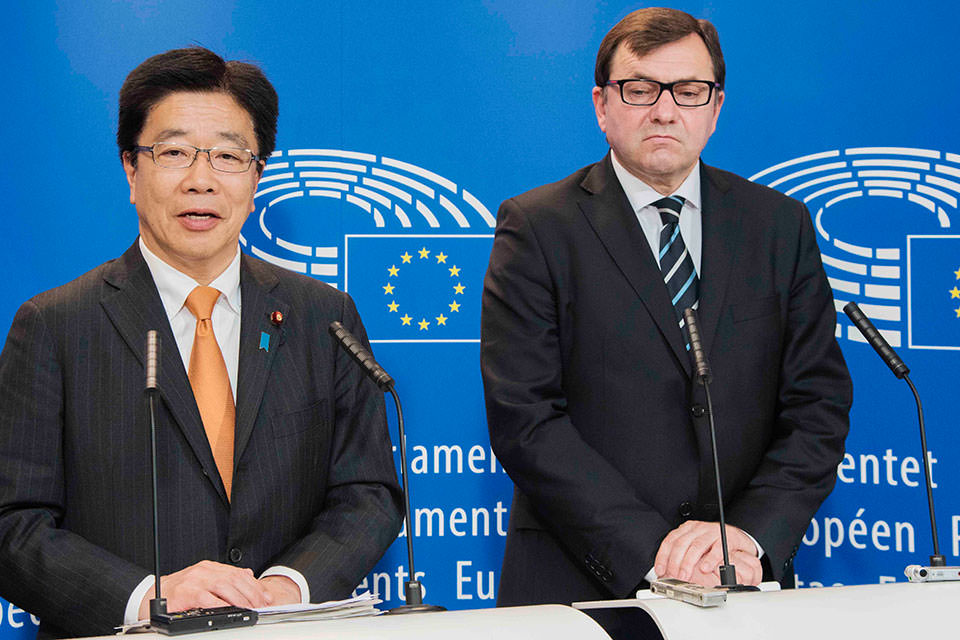 At a press conference following the meeting, Ježek said that the aim of the meeting had been to raise awareness on the issue of abductees and to exchange views on what progress has been made—as well as to gauge what can be done in the future. “This meeting enabled the members of the European Parliament to better understand this issue,” Ježek added, “and hopefully generate support for the EU and its member states when dealing with these issues.”

Minister Kato thanked the EU for the opportunity to “deepen understanding of the most up-to-date information on North Korea.” He then reiterated the fact that twenty-five EU member states have parliamentary relations with North Korea, and that seven of those states have embassies in Pyongyang. This provides a “channel” for European states to urge North Korea “to abandon its nuclear and missile development and to address the concerns of the international community on human rights issues, including the abduction issue,” Minister Kato said.

Minister Kato then added, “If North Korea does not abandon and address these causes for concern, North Korea will be further isolated and there can be no plans for their future.”

“I believe it was extremely timely that we have been able to receive support from the European Parliament on an early resolution of the abduction issue,” Minister Kato continued. Japan will continue to base its actions on the principles of dialogue and action for action, he said, “so that we can urge North Korea to come up with concrete and specific actions to resolve the abduction issue as early as possible. I would like to ask for continued and enhanced cooperation from the international community, including the European Union,” Minister Kato concluded.

This momentum picking up outside of Japan has been matched elsewhere in the international community and gratefully acknowledged inside of Japan, as well.

On May 9, Indonesian lawyer Marzuki Darusman (72) and Australian jurist Michael Kirby (78), both appointed by the United Nations Human Rights Council to investigate human rights violations in North Korea, were awarded the Order of the Rising Sun, Gold and Silver Star, at a ceremony in Nagatacho, Tokyo. 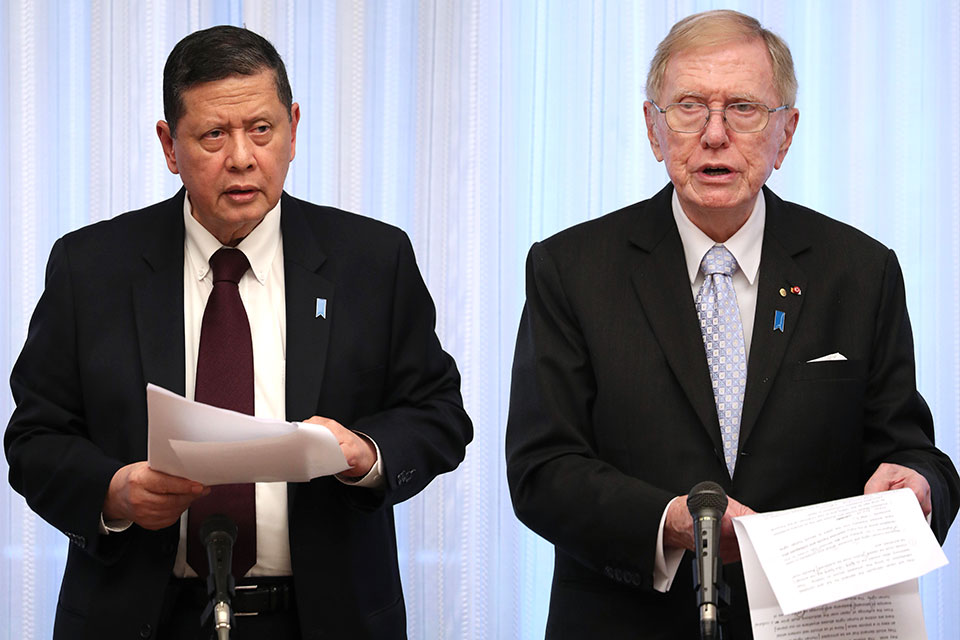 Kirby said that North Korea, which has repeatedly fired ballistic missiles in the direction of its neighbors, is an increasingly grave violator of human rights and must be met with sanctions and pressure. Darusman referred to the North Korean abductions as an ongoing crime under international law. According to Darusman, the abduction of Japanese citizens by North Korea is the most powerful means of driving forward the pressing of charges against North Korea in an international legal prosecutorial action.

In 2014, both Darusman and Kirby took part in the Commission of Inquiry on Human Rights in the Democratic People’s Republic of North Korea. The Commission’s report found that North Korea’s violations of human rights, including the rights of those Japanese citizens abducted by the North Korean regime, constituted crimes against humanity.

For further information on their speech, please refer to: http://www.rachi.go.jp/jp/archives/2017/0509jokun.html

All Official titles cited in the text are as of May 2017.