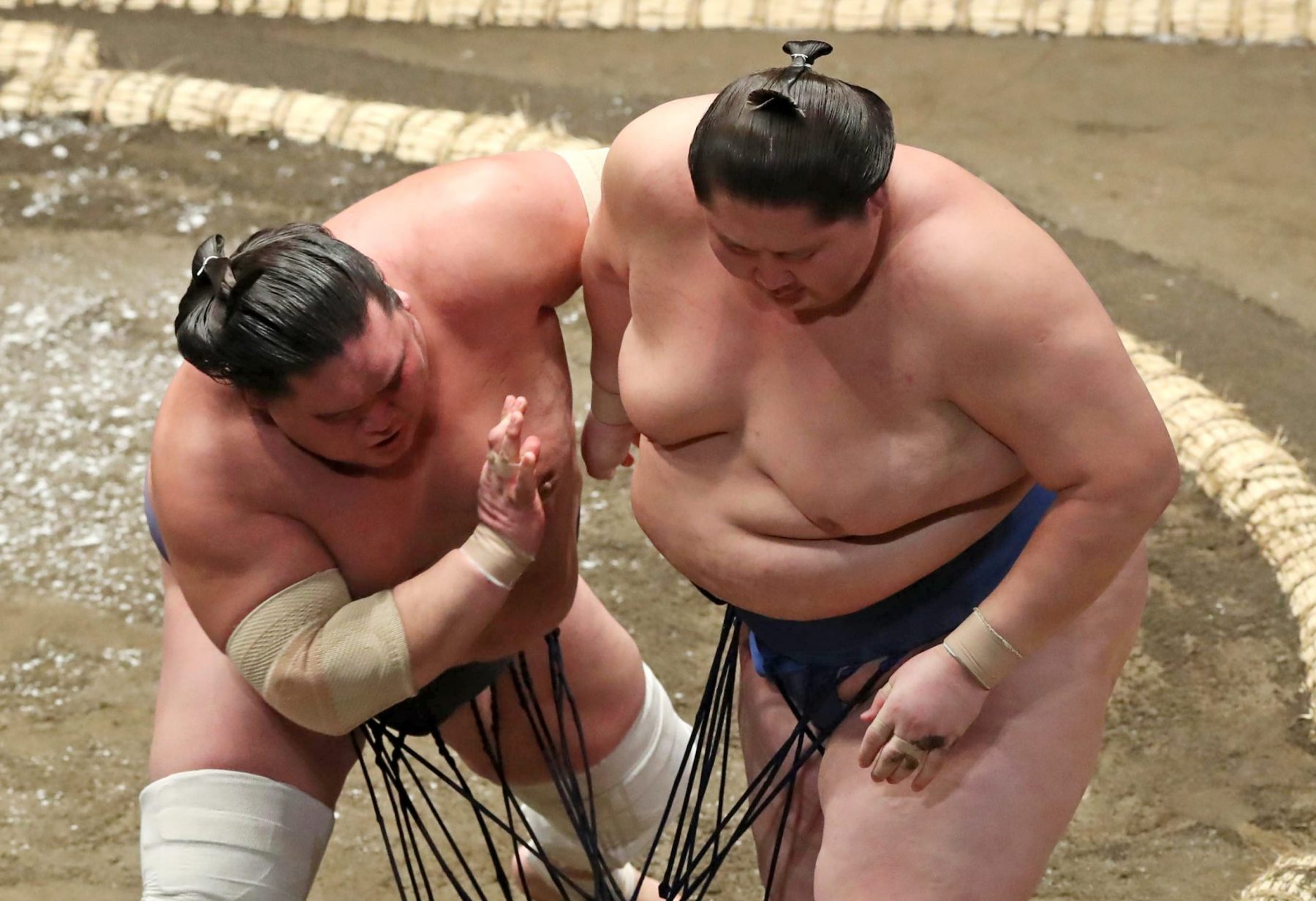 Yokozuna Terunofuji (left) faces Ichinojo on the opening day of the Autumn Grand Sumo Tournament at Ryogoku Kokugikan on September 12.

New yokozuna Terunofuji kicked off his debut at sumo’s highest rank with an impressive win over Mongolian compatriot Ichinojo on Sunday, September 12, the opening day of the Autumn Grand Sumo Tournament.

After a crushing collision at the face-off in the day’s final bout at Ryogoku Kokugikan, Terunofuji got a left-hand grip on the belt of Ichinojo and drove the komusubi out to earn the opening-day win.

Ichinojo weighs in at 206 kilograms (454 pounds) and is one of the true heavyweights in the elite makuuchi division. But the ease with which the new yokozuna forced him out bodes well for the rest of the 15-day meet.

Terunofuji was officially named sumo’s 73rd yokozuna in July, becoming the first wrestler in four and a half years to be promoted to the sport’s highest rank.

His promotion followed an epic comeback from the lower ranks.

He was an ozeki wrestler from July 2015 to November 2017. But a series of injuries and illnesses, including surgeries on both knees, saw him fall to sumo’s second-lowest division of jonidan in March of 2019.

After fighting his way back to the elite division in July of 2020, Terunojfuji won three of seven tournaments and twice finished runner-up.

He was bidding for his fifth career championship in July but lost to fellow Mongolian Hakuho on the final day of the Nagoya tournament.

But his 14-1 record in Nagoya was more than enough for sumo officials to decide to promote him to the coveted top rank.

“I felt a sense of  responsibility when I entered the ring and I was determined to do my best,” Terunofuji said. “The atmosphere was more intense than I thought it would be.”

The 29-year-old Terunofuji will be hoping to win the Emperor’s Cup in his first tournament as grand champion. He won’t have to contend with Hakuho, a wrestler who has a record 45 championships under his belt.

Hakuho and all wrestlers belonging to the Miyagino stable are not competing in the Autumn Basho after two of the stable’s wrestlers tested positive for the coronavirus.

Hakuho also had to withdraw from the New Year’s tournament in January after he was confirmed to be infected with the virus five days before the opening of the tournament.

In other major bouts on Day 1, No. 2 maegashira Hokutofuji spun Takakeisho around at the edge and shoved the ozeki wrestler out to start his Autumn campaign on a winning note.

Takakeisho was hobbled by injury and won only one bout in July so will need to earn a winning record in this meet to preserve his ozeki status for the next tournament in November.

It was a bad day all around for ozeki wrestlers. In the day’s penultimate bout, top maegashira Hoshoryu was forced back at the face-off but got a hand on the belt of Shodai and calmly drove the ozeki grappler out over the edge.

Mongolian Hoshoryu, a nephew of former yokozuna Asashoryu, won the Technique Prize after going 10-5 in the July meet and has shown steady progress since his debut in the elite makuuchi division.

The Japan Sumo Association has capped the number of spectators at 5,000, half the capacity of Ryogoku Kokugikan. The Japanese capital is still under a State of Emergency due to COVID-19.

The May and July tournaments were held with no COVID-19-related absences.

Elsewhere, sekiwake Mitakeumi came in low at the face-off and deployed several powerful arm thrusts to the chest to dispatch top maegashira Takanosho.

In the day’s first upset, third-ranked maegashira Wakatakakage took advantage of a superior face-off to topple komusubi Takayasu at the edge of the ring.

No. 2 maegashira Kiribayama made it two upsets in a row when sekiwake Meisei touched down with his hand after absorbing several powerful arm thrusts to the upper body.

Kotonowaka went an impressive 12-3 as an 11th-ranked maegashira in the Nagoya tournament and was awarded the Fighting Spirit Prize.

His grandfather was a yokozuna and his father a sekiwake. After struggling in his debut in the upper echelons, the Sadogatake stable wrestler has shown progress and will be hoping for a strong showing in this tourney.

Further down the ranks, No. 12 maegashira Tochinoshin used a textbook arm throw to send 11th-ranked Kotoeko tumbling to the dirt surface.

First Star: Terunofuji. Big win in yokozuna debut. It doesn’t get better than that.

Second Star: Hoshoryu. Solid win over ozeki Shodai after being shoved back to the edge is an early indication the rising star means business.

Third Star: Wakatakakage. Impressive win over dark horse Takayasu sets the No. 3 maegashira up for a strong tournament.