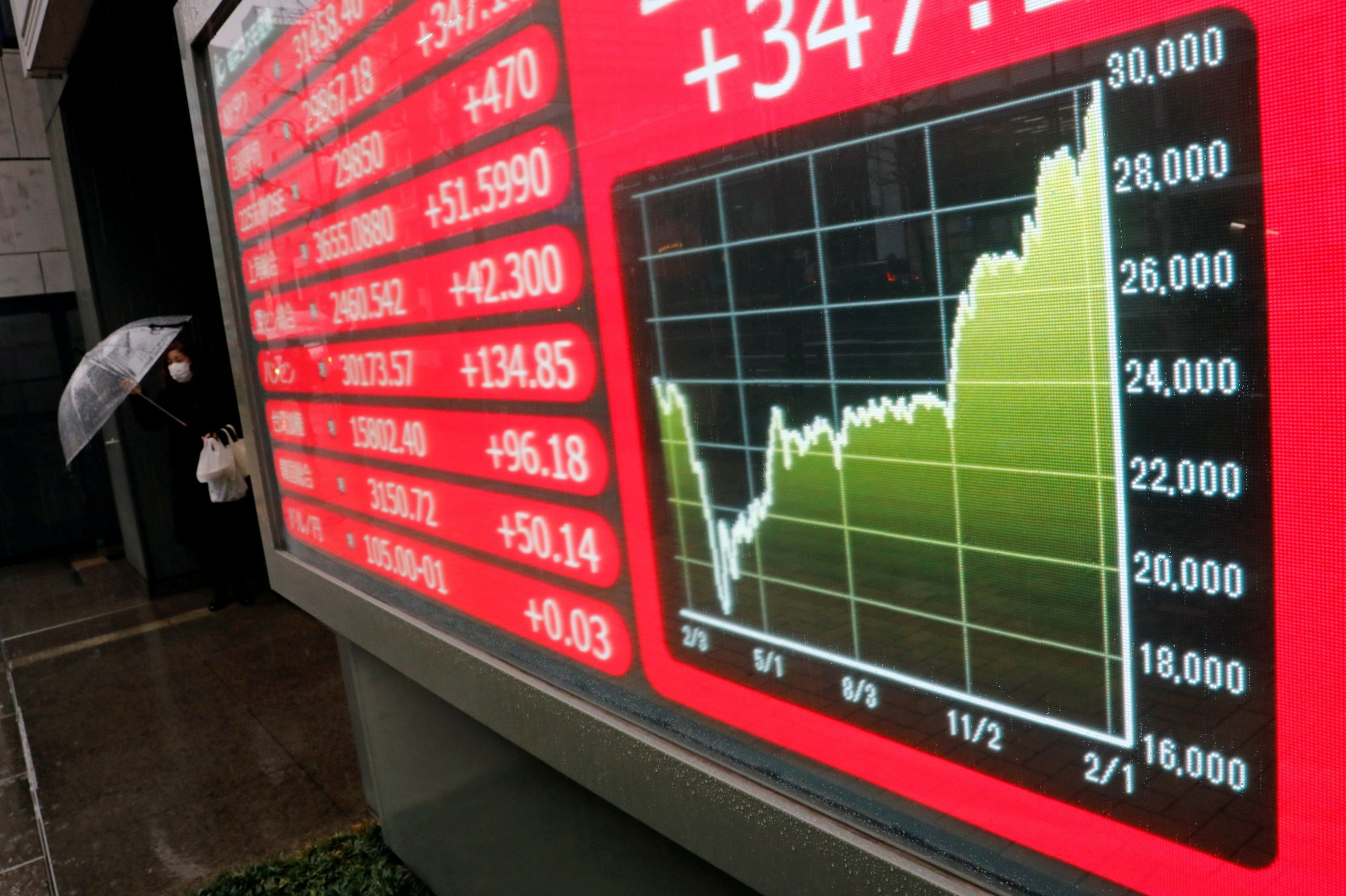 A woman holding an umbrella walks near an electric board showing Nikkei index at a brokerage in Tokyo, Japan February 15, 2021. REUTERS/Kim Kyung-Hoon

For the past few years, I have been monitoring the English language press every day to see what topics relating to Japan gain the most attention in the media.

Robots and quirky inventions arouse a great deal of curiosity, as do funny stories about animals and animation.

Perhaps surprisingly, though, the issue which comes in at number one position in terms of the sheer number of articles devoted to it is the performance of the Japanese stock market.

The Nikkei 225 share index has real star quality. If it was a person – perhaps a glamorous celebrity – this week it has been mobbed by reporters, craving for a photo and a quote.

On Monday, when it rose about 30,000 points for the first time since 1990, it grabbed the front pages internationally.

The stock market’s star quality is a constant reminder that capitalist Japan remains extremely important to the world.

The size of the Japanese economy makes it globally significant and analysts track the Tokyo stock market as a way of gauging sentiment across East Asia.

The 1.9 percent rally which lifted the Nikkei index over the 30,000 level on Monday took place when the stock markets in mainland China and Hong Kong were closed for the Lunar New Year holiday.

China’s robust economic recovery from the coronavirus pandemic should help swell the profits of the Japanese companies which operate there, including many whose shares are included in the Nikkei 225.

For example, shares in the company which operates Tokyo Disneyland, Oriental Land, have done well in recent weeks, on expectation that tourists from China and elsewhere will soon be coming back to Japan.

Compared to the markets in China and in most other Asian nations, the Tokyo stock market has a much greater trading volume and therefore more liquidity, which means investors can move their money about with relative ease.

Furthermore, the Bank of Japan is active in buying shares, and this helps to keep the market lively.

Politically though, the Japanese government generally tries to remain at arm’s length from the TSE.

This is in stark contrast to China’s approach. Investors were alarmed when the Chinese Community Party recently stepped in to block the flotation of one of its biggest financial companies, Ant Group, on the Shanghai stock exchange at just a couple of days notice. Its founder, Jack Ma, hasn’t been seen in public since.

Elsewhere, the Chinese clampdown on the pro-democracy movement in Hong Kong has led many banks and financial institutions to consider relocating their East Asian headquarters to Tokyo, which should over the long term push up the value of shares.

However, making accurate predictions for the value of stock markets is an almost impossibly difficult task – especially at the start of a typical trading day.

For example, I was surprised that the Nikkei share index rallied above the 30,000 mark on the day after a serious earth tremor in Fukushima ー and while the state of emergency imposed by the government to tackle coronavirus remains in place.

The Tokyo Stock Exchange tends to be fairly volatile, which creates excitement, especially during waves of euphoria, such as the one which is currently pushing up the value of equities globally.

Markets in the U.S. have hit records this year, and it is fortunate that Japan’s prime minister sees eye-to-eye with the new U.S. president on most trade and foreign policy issues.

Prime Minister Yoshihide Suga held a conversation with Joe Biden last month. Afterwards, Mr Suga told reporters, “I would like to deepen my personal relationship with President Biden and work to strengthen the Japan-U.S. alliance.”

Things are also going well with the European Union.

Toshimitsu Motegi became the first Japanese foreign minister to take part in the EU Foreign Affairs Council, celebrating the tangible economic benefits which have accrued to both sides through their Strategic Partnership Agreement.

In an open letter to the press published this week, the ambassadors of the EU countries to Japan said: “The European Union-Japan partnership – based on far-reaching shared values and common interests – has never been closer. It has a bright future.”

New data has been released which suggests that Japan is in a strong position to enjoy a recovery following the downturn caused by coronavirus.

The economy grew by three per cent in the fourth quarter of last year, compared with the previous quarter – that’s markedly more than analysts had expected.

It’s clearly a good time for business. Earnings at Japanese companies climbed 48% in the past quarter, putting the country on track to attain its first year-on-year growth in nine quarters.

The next great project for the nation starts in earnest this week: the mass vaccination against coronavirus of every person in Japan.

Last week, the authorities approved the use of Pfizer’s coronavirus vaccine, so the rollout is starting much later than in the U.S. and the U.K.

However, the COVID-19 infection rate in Japan is relatively low and the infrastructure of its medical system is sophisticated.

The sense of relief that will follow a successful vaccination drive should be immense, and it was anticipation of all the opportunities that will open up in the post COVID world that the Nikkei did its star turn this week.

But I think credit also needs to go to the supporting cast: Mr Suga, Mr Motagi and the captains of Japanese industry, without whose hard work this rally would not have been possible.

I am glad the European ambassadors remembered to thank them this week. I expect the investors will be very grateful, too.

Duncan Bartlett is the Editor of Asian Affairs magazine and a former presenter of World Business Report on the BBC. He is a research associate at SOAS China Institute, University of London and a regular contributor to Japan Forward.