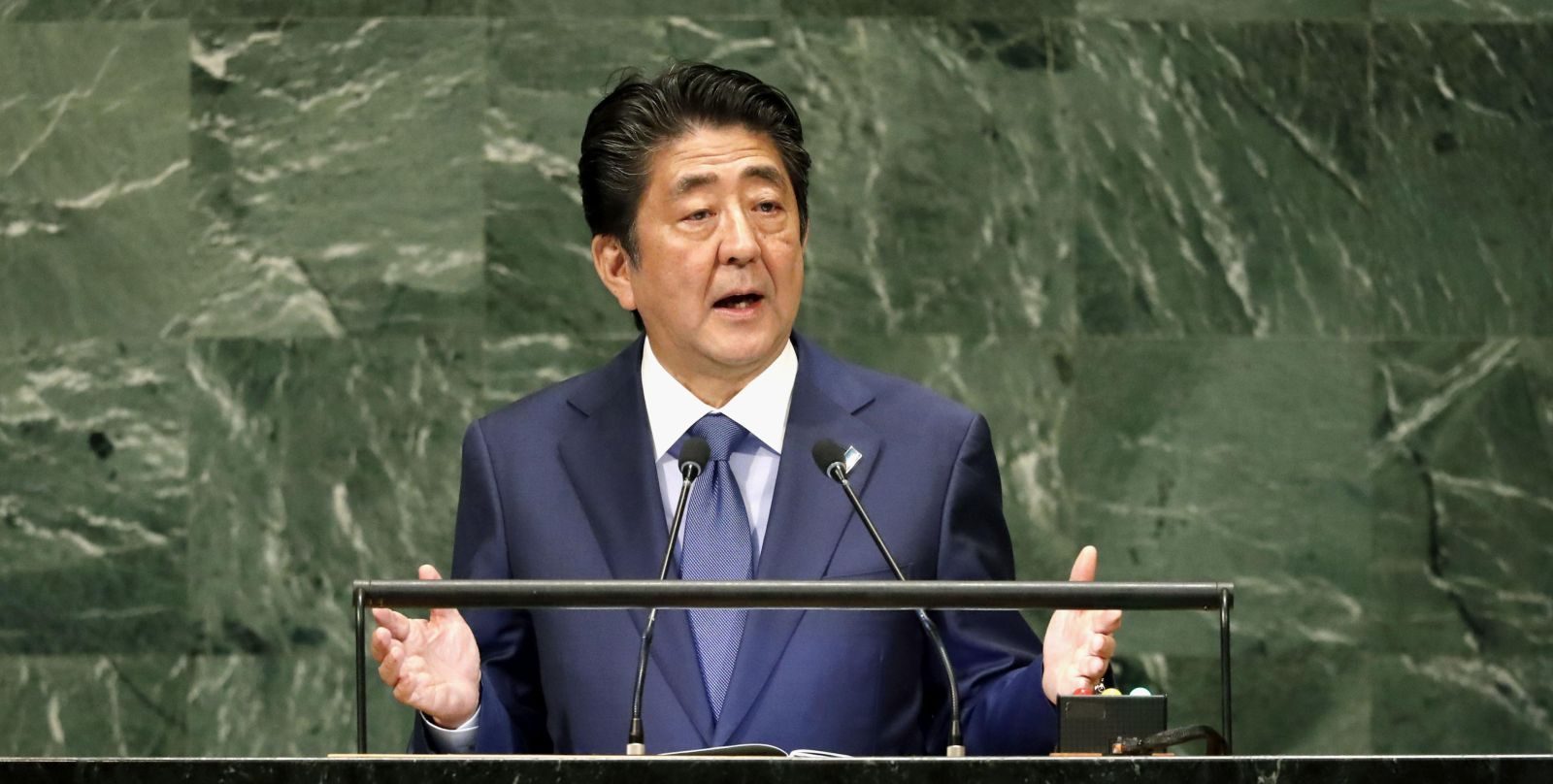 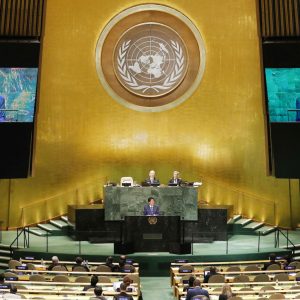 Japan Prime Minister Shinzo Abe addresses the United Nations General Assembly on September 25, 2018 on the next generation of awareness of the Indo-Pacific. 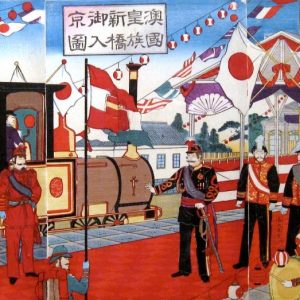 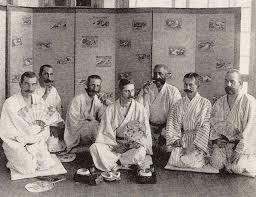 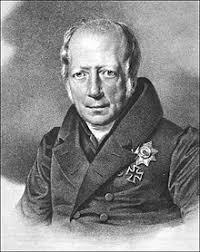 In Prime Minister Shinzo Abe’s address to the73rd Session of the United Nations General Assembly  on September 25, he highlighted the significance of the location of ASEAN countries and the importance of the historical connections and exchange among people speaking Austronesian languages:

The countries of ASEAN lie at the ‘confluence of the two seas’ — the Pacific and Indian Oceans. And it was the forerunners living in what we now call the Pacific Island Countries who, in eras long past, crossed these two oceans to introduce products to faraway eastern Africa.

It is important that Prime Minister Abe and his administration are, at this time, pushing the idea of a “free and open economic system.” It is equally important that they have noted it has a deep history, having been enjoyed by humans across the Indo-Pacific oceans over the last few thousand years.

These Indo-Pacific ancestors are the forefathers of the present Pacific Islands people as well as possibly the Japanese, according to some anthropology studies. The idea of the “free and open” economic system can also be seen as a metaphor for connections among the modern countries within the region today.

Yet, how much do we understand these past human connections linking the oceans of the Indo-Pacific over thousands of years?

European Exploration and Expansion of Austronesians

The identification of prehistoric connections between the populations of the Indian and Pacific oceans was first made by early European explorers in the Age of Enlightenment in the late 18th century. In particular, they noted similarities in spoken languages among peoples in the region.

Joseph Banks, who accompanied Captain James Cook on his first voyage, and George Forster, a naturalist who was on Cook’s second voyage with his father, were some of the first to identify that similar languages were spoken across the Indo-Pacific. Cook himself saw the Polynesians as originating from the East Indies.

The work of Forster influenced the German linguistic scholar Wilhelm von Humboldt (1767-1835), who also studied Indonesian languages and is recognized as the founder of Austronesian language studies. Humboldt termed this language family “Malayo-Polynesian,” but it is now more commonly recognized as “Austronesian” — a term coined in the late 19th century by the Austrian priest Father Wilhelm Schmidt.

Wilhelm von Humboldt was also a philosopher, diplomat, and founder of Humboldt University in Berlin. He did not participate in any the voyages of exploration. However, his brother, Alexander von Humboldt, was a close collaborator of Georg Forster and well aware of his Indo-Pacific work, all of which was published soon after the voyages were complete.

The studies by European scholars identified and recorded that Austronesian speakers brought with them not only their language but their social and political systems as well that developed into the societies we see today.

We now know through decades of archaeological research that these Austronesian speakers expanded into the Pacific, bringing with them a translocated environment, including pigs, chickens, and dogs. On their journeys, they carried along plants, such as taro, yams, domesticated coconut, breadfruit, and many others. In planting these crops they established new gardens, transforming the environment from virgin forests to cultivated landscapes.

Scholarship on the Indo-Pacific was undertaken also by the colonial powers of the region, such as the English, French, and Dutch, in addition to the Germans and members of the Habsburg Empire who did not have colonies at this time. All of them made major contributions in rich scholarly research into the region.

Academic Links between Japan and Germany

What of Japan’s links to Europe? Evidence of early ties and intellectual exchange can be found in the museums of Europe.

One example is illustrated by a discovery about 15 years ago when I visited the Natural History Museum in Vienna. I found a large spider crab originating from the Sea of Japan on exhibit. It was a gift in 1882 from the Japanese Emperor Meiji to the last Emperor of the Habsburg Empire, Franz Joseph.

Why did the Japanese Emperor present this crab to the Emperor of the Habsburg Empire? Was it another metaphor for Indo-Pacific connections or part of a scholarly exchange? These questions were not answered by the exhibit alone.

The first European who introduced an academic perspective on Japanese culture and its natural world to Europe was the German scholar Engelbert Kaempfer, who stayed in Japan from 1690 to 1692. During his stay in Japan, he was honored with having his name given to the scientific nomenclature of this crab, Macrocheira kaempferi.

Connections between Austria and Japan could also be seen 11 years later, when Archduke Franz Ferdinand, the Austrian emperor’s nephew and next in line to the Habsburg throne, paid an official visit to Japan. The Archduke was later assassinated in Sarajevo — triggering the First World War — but he visited Japan for a month in 1893 and even got a tattoo during his stay.

One hundred and fifty years ago, at the beginning of the Meiji era, many Japanese leaders studied in Germany, including Japan’s first Prime Minister, Hirobumi Ito.

German scholars likewise came to Japan. One of the most important figures among them was Erwin von Bälz, a medical doctor who stayed in Japan for 27 years (1876-1905). Many Japanese may recognize him as the person who developed the Kusatsu Onsen (natural spa). However, he also undertook an anthropological study of the Japanese people, arguing that the majority of Japanese were part of the “Malayo” group (Austronesian language group).

Many Japanese were influenced by these German scholars’ research, including Dr. Inazo Nitobe, one of the founders of Japan’s colonial policy and the deputy secretary-general of the League of Nations. Such studies by Japanese and German scholars into cultural connections between Japan and the Indo-Pacific ceased after the World War II, when new paradigms on cultural identity developed.

It was later alleged that many geographical and anthropological studies were used incorrectly and even distorted by the Japanese military during the war. An example includes the then-new concept of geopolitics.

After the war, many Japanese scholars who had been involved in military work were purged and much of their work abandoned. Indeed, many books were banned after the war.

Nishio Kanji, in his 2008 book Breaking the Seal on the GHQ Burned Books (Tokuma Shoten Publishing), outlines this well. He reports:

From January 1, 1928, to September 2, 1945, approximately 220,000 titles were published in Japan. Of those, 9,288 were selected for examination, and 7,769 of those were taken and designated as “confiscated propaganda publications.” This is what I am talking about when I refer to “book-burning.” The occupation army created the master list of 7,769 titles, but it was the Japanese government who actually carried out the confiscations throughout the whole country based on that list.

Much of the historical work linking Japan with the Pacific was thereafter neglected and remains so today.

Now, Prime Minister Abe is raising the international profile the Indo-Pacific region as an example of a “free and open economic system.” Yet, what do we know about this region?

Much of what previous generations once knew, including their published works, has been lost or neglected. After the war, the baby was thrown out with the bath water, leading to an ignorance of the Indo-Pacific by Japanese today.

Renewed encouragement of Indo-Pacific and Japanese studies is urgently needed to redress this loss. Studies should be undertaken from many perspectives, at different levels, and using a range and variety of scholarly topics.

Japan should take the initiative on this research, working with scholars from Europe, Australia, New Zealand, and the United States, as well as the Pacific Islands, where scholars and books were not abandoned.

Last but not the least, I would like to tell Prime Minister Abe that there are other achievements by Austronesians which resulted from a free and open economic system where freedom of passage on the oceans was central. It is the trade and exchange of valuable foods throughout far-reaching regions of the world.

For example, Austronesian people not only brought bananas to East Africa, but they also reached South America and brought back the sweet potato to Central Polynesia some 1,000 years ago.

For many decades, scholars thought that the people of the Pacific came from South America because of the presence of sweet potato in the Pacific. But the late Japanese archaeologist, Dr Yosihiko Sinoto, who was one of the fathers of Pacific archaeology, changed this theory by studying the movement of fishhooks from Asia to the Pacific.

The introduction of the sweet potato drastically changed Pacific society as it had a shorter growing cycle and could be cultivated at high altitudes, where previously other crops such as taro could not grow. Pigs can also eat sweet potatoes in their raw state, whereas taro had to be cooked for pig consumption.

It was my great fortune to learn about the Pacific from Dr. Sinoto. Now, this is my turn to provide an opportunity to teach the next generation about the Indo-Pacific.