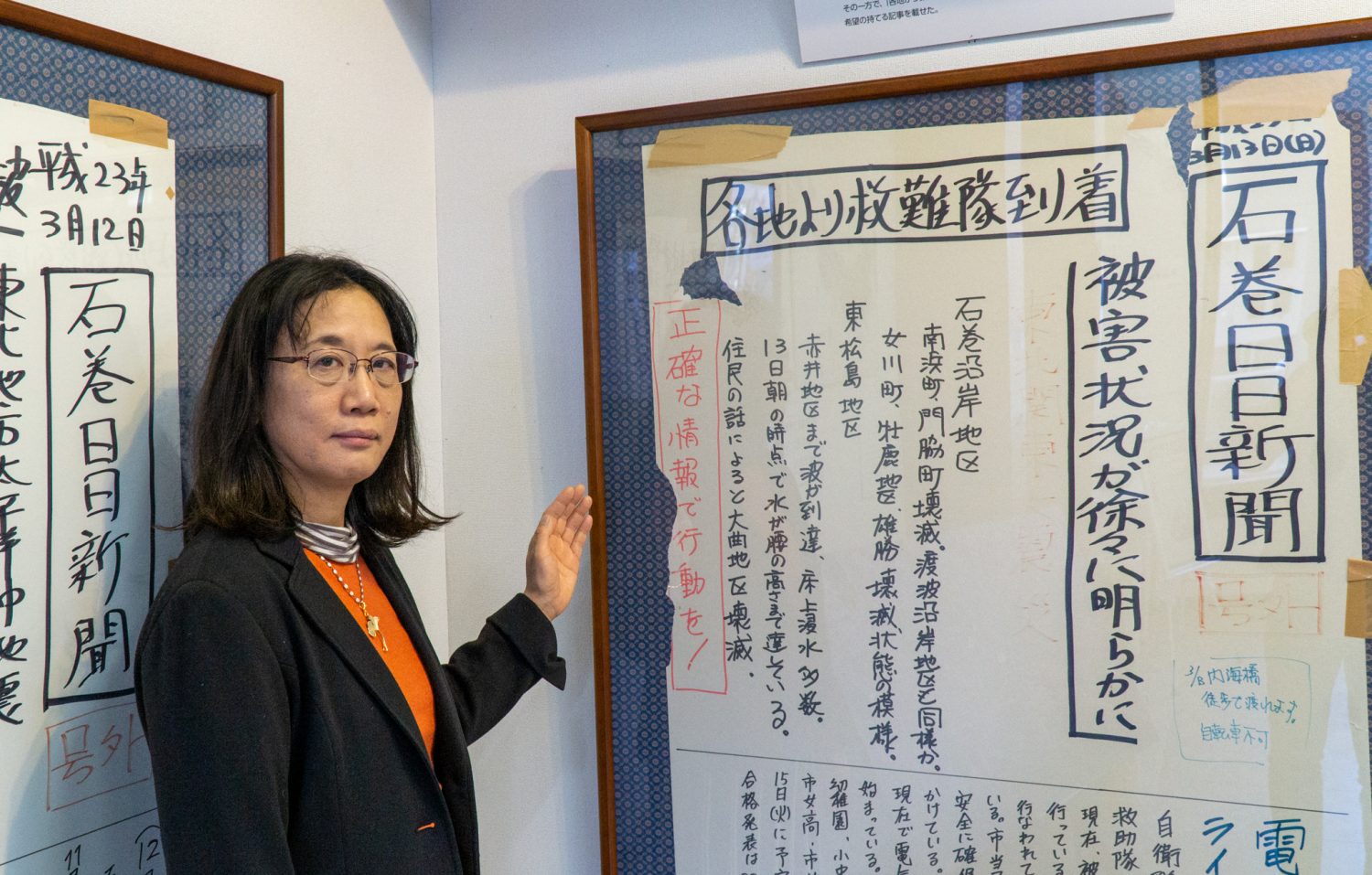 How many times have you asked yourself: In an emergency, who is an essential worker? What jobs are most necessary?

COVID-19 has reminded us of the importance of the people who keep our society running. There are rescue and medical workers, supermarket employees, garbage collectors.

But perhaps surprisingly, at the beginning of the pandemic, we were reminded that the media is also key in time of emergencies.

Ten years ago, one small newspaper — Ishinomaki Hibi Shimbun in Miyagi Prefecture — managed to bring hope to local readers in the immediate aftermath of the March 11, 2011, earthquake and tsunami. Their tools: literally just pen and paper.

The handwritten newspapers of Ishinomaki Hibi Shimbun are still exhibited all over the world, most recently in Taiwan in March 2021.

That same publication became a hub for children’s concerns. By founding a children’s newspaper called Kodomo Shimbun, it helped the youngest victims of the earthquake and tsunami find their voices and speak on their own terms after the earthquake.

And even 10 years after that massive M9.0 earthquake and the giant tsunami that followed, we are reminded of the vital importance of delivering news.

We caught up with Ishinomaki Hibi Shimbun reporter Michiko Hirai, 60, to learn more about how the resilience the world has found in Ishinomaki and other parts of the Tohoku region sometimes comes from the power of the pen and being able to tell your own story.

Representing the Spirit of Journalism

Ishinomaki Hibi Shimbun has gained international recognition for its efforts in delivering news in times of emergency.

There are few recent disasters that took as much of a heavy toll on the local population as the earthquake of March 11, 2011, and subsequent tsunami and nuclear accident.

The whole region was left with an immense loss of life, dispersed rubble, no water, electricity, or direct connection to a lifeline for food or rescue.

Michiko Hirai was a reporter on that fateful day. After the earthquake struck, she recalled going up the main hill next to the town, Hiyori Yama, to get a better look at the sea.

“I saw the wave of the tsunami in front of me. The truth is that it was surreal. And people around me were crying because they were seeing their livelihoods swept away, everything which was most dear to them,” she said.

The local newspaper for which Hirai worked for, Ishinomaki Hibi Shimbun, was in trouble as well. History was unfolding in front of them, yet they, too, had no water or electricity, both necessary to operate the printing presses. Moreover, water from the tsunami had also affected the printing machine.

But the chief of the newspaper, Hiroichi Konoe, had no doubt: No matter what, they had to inform citizens about what was going on. It was important to tell the story.

Konoe took a black marker and, on a piece of paper one and a half meters long, wrote in large letters, "The Largest Earthquake in Japanese History, Magnitude 8.8 (it was later corrected to M.9) Hits Tohoku area.”

It was the first of six handwritten newspapers which would be printed that week. Each day, there would be six copies of the paper, and because they would hang on the walls of evacuation centers, they came to be called “kabe shimbun” (wall newspapers).

Explaining the content of the paper, Hirai said: “For people here, it wasn’t important to know, for example, how the nuclear plant in Fukushima was doing. We wanted first of all to convey useful information for them: which shops were open, which roads were safe.”

On March 13, the paper ran a list of the 100-plus evacuation centers around the city: pachinko parlors, supermarkets, parking lots turned into impromptu evacuation locations, some even with more than 4,000 people.

“Phones were not working. It was hard finding anyone. We thought that by sharing this information, one might be able to track down a loved one who perhaps worked next to ‘x’ supermarket, which was now a shelter,” Hirai said.

Poignantly, many headlines were also filled with hope for the local population. “The Self-Defense Forces are on their way.” “Food is on the way.” “Water operation is being restored.” And, finally, on March 19, “Let’s all overcome this together!” This last one was quite fittingly in Ishinomaki dialect.

Looking back, Hirai isn’t shy about saying that, for a moment, the decision to write a paper by hand seemed like a crazy idea. “To tell the truth, when I was first told that our editors wanted us to write the paper by hand, I was a little apprehensive. Would locals laugh, would they think less of us, I wondered?”

But it became clear later that people were grateful. They would crowd around the paper when it was hung up and read it earnestly.

In an age where fake news can spread like wildfire on SNS, Hirai told us how at that moment she was reminded of something important: “It was a faith built over nearly a century of operation, that what was written in the newspaper was fundamentally not wrong. They believed what we wrote, and we couldn’t afford to let down this responsibility.”

To this day, sets of the newspaper’s kabe shimbun are exhibited all over the world to remind the world of the importance of resilient journalists in spreading information.

Hirai reflected on the importance of delivering correct information, in light of the lessons learned 10 years ago: “[After 2011] a professor from a University in Tohoku did a study on how in the immediate post-earthquake period in Sendai, rumors were running rampant — things which were scary but turned out not to be true. It was for this reason that we were trying to call on people to be cautious about sharing information unless they knew it was accurate. We wanted everyone to ask themselves, ‘Is this true?’”

Hearing from Ishinomaki Hibi Shimbun I was reminded of one key point: Being able to tell your story, with real information, can help create connections between people. But, more importantly, it can help heal.

In a time of depressing COVID-19 and fake “news,” as journalists and news-readers we’d do well to remember that.

Find articles related to this story in the series, 3.11 Earthquake: Rebuilding, at this link.