[3.11 Earthquake: Rebuilding] The Power of Humanity in the Face of Irreparable Loss 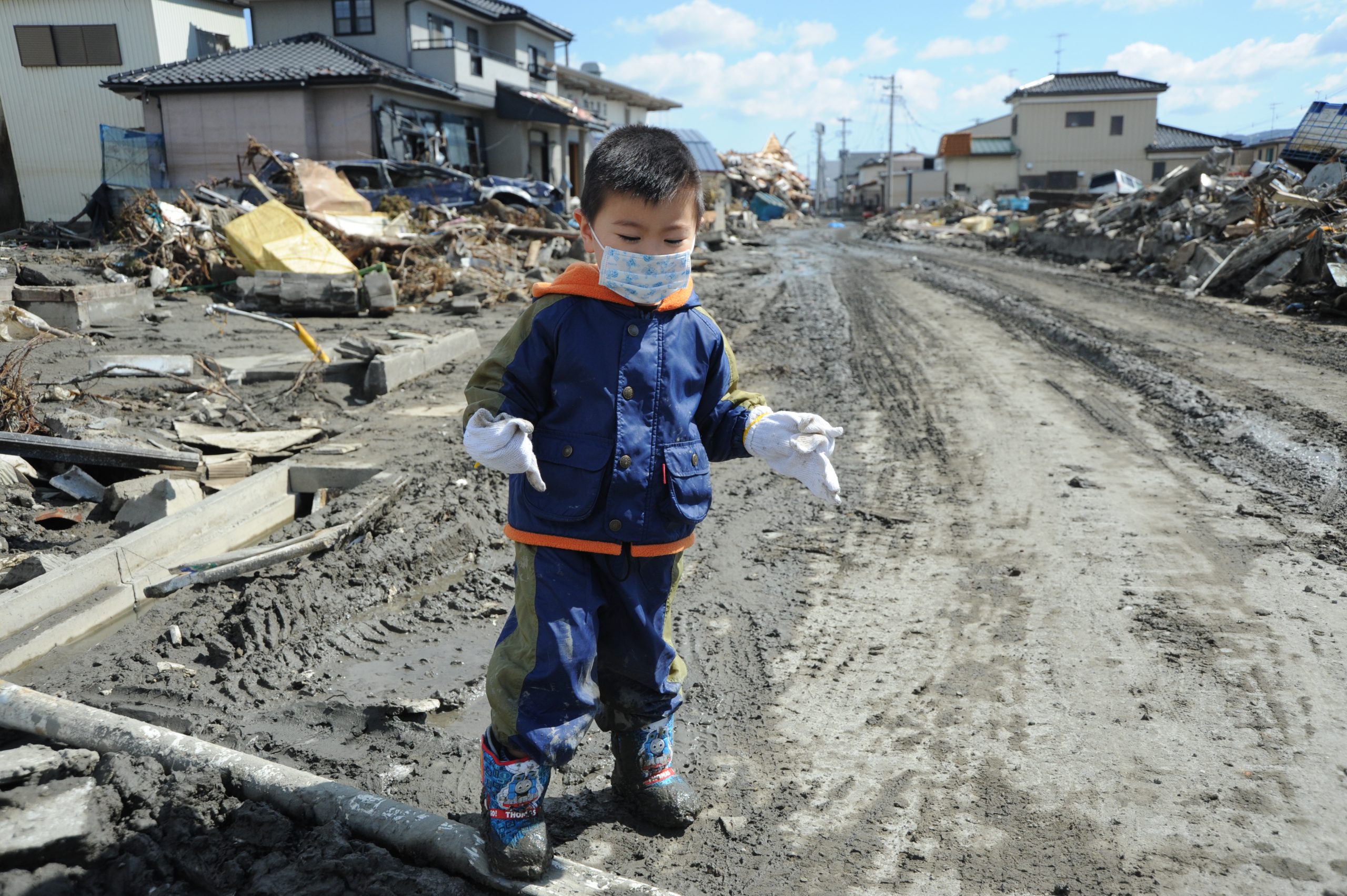 In June 2011, I went up to Tohoku to visit my friend K. who lives in the coastal town of Ofunato. I hired a car at the nearest bullet train station and set the satnav for Ofunato Station.

When I arrived after a two hour drive, I found that the station no longer existed and neither did the town center. Instead, my gaze rested on acres of rubble, twisted metal, shattered plastic, wires, shelves, spoiled household goods, unclassifiable objects that once had a purpose.

A mile from the shoreline, a capsized fishing trawler nestled between broken buildings. A dead car sat in a river, water up to its windscreen. The air was acrid with dust.


K greeted me, smiling and crying. On the phone she had told me “Women are strong.”

Her parents’ house had been close to the port. As soon as the tsunami alert sounded, she went to pick them up in her car and drove them to her place, further up the valley. Now all that remained of the parents’ house was a few bare concrete blocks. Their only surviving possessions were the clothes they were wearing at the time.

“Some people lost much more,” K told me. “They kept their life savings in cash at home.”

Ofunato had been lucky, she continued. It had suffered badly from the last serious tsunami, triggered by the Chilean earthquake of 1960. As a result, the townspeople were sensitized to the risk. Every year there were two or three alerts for a “large-scale tsunami”. Each time, K would pick up her parents and drink tea with them at her place until the all-clear message appeared on her phone.

In contrast, the neighboring town got off lightly in 1962 and therefore was slow to react this time. Thirty percent of the people working in the local government office died.

“The first thing was the sound,” K recollected. “A horrible crunching, roaring sound. I went out into the garden and saw the wave coming over the top of the pedestrian bridge. That’s when I knew we had to get out of here too.”

The water flooded into K’s garden but stopped there. By that time, she and her parents had fled into the mountains. They spent days up there, living in an old people’s home with no electricity, no heating, no phone. After finding some gas canisters and a portable cooker, she defrosted some frozen food and cooked it up for the hundred inmates.

K’s father was head of the local post office for fifty years. Years after his retirement, his friends called him “Bureau Chief.” One of the proudest days of his life had been when the Emperor decorated him for his long service at a ceremony in Tokyo.

“We were lucky,” he said. “It would have been much worse if the tsunami had come at night.”

I heard this again and again. These people who had lost so much kept saying they were lucky. But perhaps luck comes to those who believe they are lucky.

A few weeks after the disaster, K was walking past one of the many piles of rubble that dotted the area when she saw something glinting among the lumps of concrete and broken furniture. It was her father’s medal, conferred by the emperor, still intact. None of their other lost possessions reappeared.


At dusk, she showed me the graveyard of cars, eight hundred of them, some just dented, others squashed like beer cans.

“If you come late at night you can hear voices,” she said. “People trapped inside the cars are calling out for help,” she said. I checked to see if she was joking. She wasn’t.

I last saw K in the summer of 2019. When the disaster happened, her husband and son were in Tokyo, working and studying respectively. Now they are all back together in the family home. She works part-time as a juku teacher and volunteers to help aged people, though Covid has disturbed the normal routine.

I stayed at the Ofunato Onsen Hotel, up on a bluff overlooking the bay. The seafood was delicious, the view spectacular. The town was entirely rebuilt, the station spiffing new and equipped with all the latest tech.

The material devastation of 2011 had disappeared like a bad dream, but the human damage was irreparable. So many had died, so many lives had been blighted. K’s father had passed away several years before, never really recovering from the trauma.

Life is not easy here. It never has been and never will be. The courage is humbling. What is COVID-19 when you’ve been through 3.11?

Shoji “Swifty” Sugawara reopened seven weeks after the disaster, half-expecting nobody to come. His top-notch audio equipment was in a sad state. Aftershocks would send the stylus skipping across the vinyl from time to time, but customers didn’t seem to mind. They drifted in straight away, wanting good strong coffee and whisky and, most of all, jazz of all kinds, at full throttle, now more than ever.

Swifty’s place was in Ichinoseki, a town of 110,000 in the south of Iwate Prefecture, a six hour drive from Tokyo. Well away from the coast, the town was protected from the deadly tsunami. Yet he knew people who had disappeared. Nearly everybody did.


The quake knocked down a retaining wall of the building, and the electricity was cut in this part of town. For a week he sat there in the dark, smoking and thinking. When power was restored, the sight that greeted his eyes stunned him. Tangled wires, broken glass, mess everywhere. The institution that he had spent four decades building had taken a hammer blow.

Yet he was determined to get the place up and running by April 26. For that was the meijitsu (date of death) of the man who gave him his nickname and was the inspiration for his life’s work. The place that Swifty runs is named after him too: the legendary bandleader, Count Basie.

The “jazz kissa” (jazz coffee shop) is a peculiarly Japanese institution, born from the confluence of two booms in the early sixties. The first was the jazz boom set off by the visits to Japan of musicians of the calibre of Art Blakey, Thelonious Monk and Miles Davis. The other was the hi-fi boom, which increased the availability of audiophile-class equipment, such as Swifty’s beloved JBL (James Bullough Lansing) speaker system.

Back in the day, the typical jazz kissa would have a “no talking” rule and would serve only coffee, ensuring that there were no drunken interruptions to the flow of sounds. Today, Japan’s six hundred remaining jazz kissas are more broadminded. Some play music that isn’t jazz and offer a good menu. Some, horror of horrors, play CDs.

“Basie” is probably the most famous of them all. But it isn’t just a place to listen to life-affirming music in the middle of sparsely populated, somewhat left-behind Iwate Prefecture region. It is also a node in an invisible network that has a nationwide, indeed a worldwide reach.

Well-known Japanese musicians who have been there, and in many cases performed, include piano pugilist Yosuke Yamashita, avant garde trailblazer Kaoru Abe, and Sadao Watanabe, the only bebopper to be awarded the Order of the Rising Sun. Famous foreign visitors include Elvin Jones, Anita O’Day, Freddie Hubbard and sonic bomb-thrower Peter Brotzmann.

How did this come about? Swifty was born and brought up in Ichinoseki. In the late sixties, he spent several years in Tokyo. He went to Waseda University and joined its High Society Orchestra as a drummer, which led to a one month tour of the United States. Several of his pals went on to become highly influential in creative circles, such as veteran comedian Tamori. By chance, he met a well-known music and film critic who became his mentor.

Those few years were enough to provide him with a lifetime of connectivity. In 1970, he returned to his hometown and set up “Basie.” He has been running it for the last fifty years.

In 1983, Count Basie himself visited the jazz kissa named in his honor. He was using an electric wheelchair which required Swifty to instal special “barrier free” ramps to negotiate the stairs. A year later, the great jazzman passed away at the age of 79.

Not many people get the chance to get on friendly terms with their musical heroes. When Swifty is asked what Count Basie was like in person, he answers as follows. “Listen to his music. He’s exactly like his music.”

In September 2011, exactly six months after the quake and tsunami hit, Swifty fixed up a charity concert for the Count Basie Orchestra, featuring several musicians who had played with Basie for decades. It took place at Motsuji Temple, a few miles from Ichinoseki.

Two thousand people attended in the cool of the autumn evening. Arrangements for the gig were helped by the fact that one of the temple’s monks was a jazz fan who frequently patronized the Basie jazz kissa.


The Power of Humanity

I’ve gazed at many thousands of Shoko Hashimoto’s photos of the 3.11 disaster. They show the scale and fury of the destruction, and also the power of the human response. There are many images of people eating heartily and smiling unfakeable smiles, even while living in disused schools just weeks after the tsunami. Communal ceremonies, such as the New Year’s lion dance, have a deeper significance when dealing with adversity.


The conclusion: my God, these people are tough.

Perhaps all humanity is when survival is at stake. Most of us will never know because we will never have to face the same kind of test. Let’s hope so anyway.


Author: Peter Tasker  Find other articles by the author here.