A Super Saturday for Japanese Horse Racing in Dubai 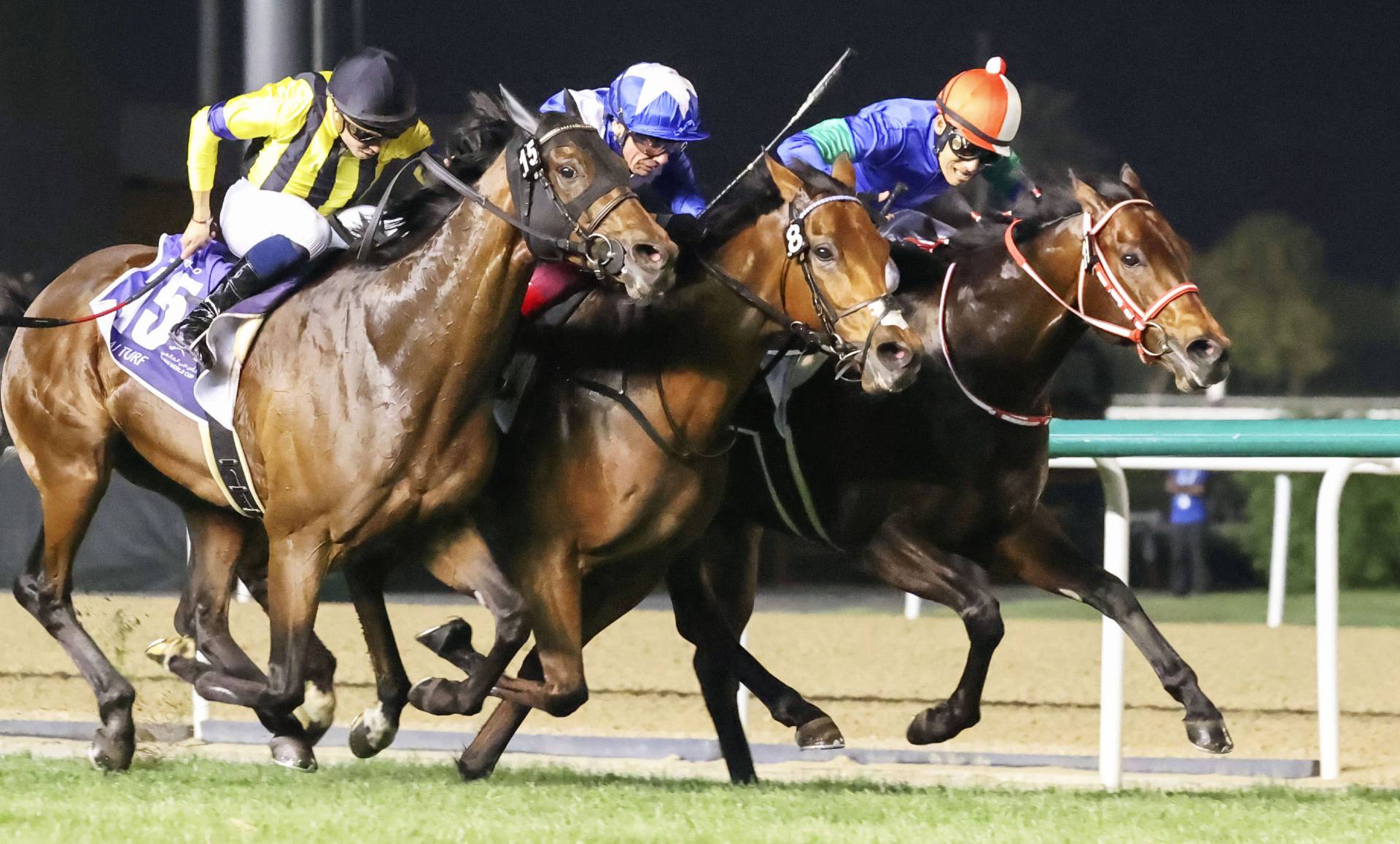 Panthalassa (right), guided by Yutaka Yoshida, competes in the Dubai Turf at Meydan Racecourse in Dubai on March 26. Panthalassa and Lord North (middle) finished in a dead heat, sharing the win.

Japanese horses demonstrated their talent as the collective commitment to excellence shared by their owners, trainers and jockeys produced impressive results on Saturday, March 26 in Dubai.

On a star-studded day for horse racing, eight of nine races at Meydan Racecourse featured an international field of top-class thoroughbreds. The lone exception: the Dubai Kahayla Classic for purebred Arabians.

Japanese-bred horses won four races and shared the title in another.

The 2,000-meter Dubai World Cup concluded the day’s festivities at Meydan Racecourse, with American trainer Bob Baffert’s Country Grammer, ridden by Italian Frankie Dettori, securing a 1¾-length victory over Hot Rod Charlie in 2 minutes, 4.97 seconds. Country Grammer returned to competition after a nine-month layoff following the Saudi Cup in February, where he was the runner-up.

“It has been a long time but it is worth it,” Dettori said. “This is my fourth Dubai World Cup win but I have never won at Meydan.”

Kawada said: “It was a good place. He (Chuwa Wizard) was second last year and this year he was third so it was a very strong race and a very good run. He’s matched last year’s performance today and we’re very happy.”

On Saturday, a total of 22 Japanese horses competed in the octet of races, starting with Bathrat Leon in the 1,600-meter G2 Godolphin Mile in the late afternoon.

The 24-year-old winning jockey was thrilled by the outcome of the race.

“The plan was to go forward and just go quick,” Sakai said. “Everything worked out and the horse kept going. I think he preferred the dirt surface here more than in Japan. Mr. Yahagi is one of the best trainers in the world. It’s a great result.”

Yahagi conceded that the outset of the race was the pivotal component of their recipe for victory.

“He’s a good strong front-runner and we know the bends well,” Yahagi said of Bathrat Leon. “So he got a good start and he pushed and he was able to keep it up to the line. We got our tactics right.”

After the Godolphin Mile, which started at 8:20 PM JST, the Dubai Gold Cup began about 30 minutes later. Again, the results were superb for Japan’s racing representatives.

French jockey Christophe Lemaire, a prolific winner on the Japan Racing Association circuit for many years, and 4-year-old Stay Foolish teamed up for a triumph in the G2 Dubai Gold Cup, a 3,200-meter turf race.

“He didn’t break as fast as he did in Saudi [Arabia] so I was behind a good horse but happy to be on the inside,” Lemaire told reporters later. “He doesn’t have a big turn of foot and I thought the potatoes were done, but in the end he outstayed them. I think he could run in any Group One [race], anywhere.”

In the UAE Derby, trainer Koichi Shintani’s Crown Pride outsprinted Summer Is Tomorrow to the finish by 2¾ lengths, winning the 1,900-meter event in 1:59.76.

With the victory, Aussie jockey Damian Lane’s ride, the 3-year-old son of Reach the Crown, qualified to compete in the Kentucky Derby.

“I was very confident turning in from about the [600-meters remaining mark),” Lane commented in a post-race interview with reporters. “He just leveled out as I turned in about 300 [meters to go]. I began to worry but when [Summer Is Tomorrow] got tired, he didn’t.”

“He likes to do his running at the back of the field in a 1,200-meter race,” Kawada commented, according to bloodhorse.com. “That’s just his style and he did the same here, and I had a very good feeling about him doing well going into this but there was too much ground to make up in the end. But it was a good race and I’m happy with the way he went.”

Dettori and Yutaka Yoshida and their respective rides ― Lord North and Panthalassa ― delivered a memorable duel in the Dubai Turf. When the $5 million USD (￥609.5 JPY), 1,800-meter race was done, it was declared a dead heat. The winning time: 1:45.77.

Yahagi, who also trains Panthalassa, discussed the significance of the day’s results while adding context to the rise of Japanese horse racing on a global scale.

“We’ve had a lot of good luck today so we didn’t think we’d lose!” Yahagi told reporters. “I’ve never known a wait like that in a photo finish.

“As the level of Japanese racehorses has increased over the years, I’ve been really proud to showcase it on the global stage.”

A Quintet of Japanese Horses in Dubai Sheema Classic