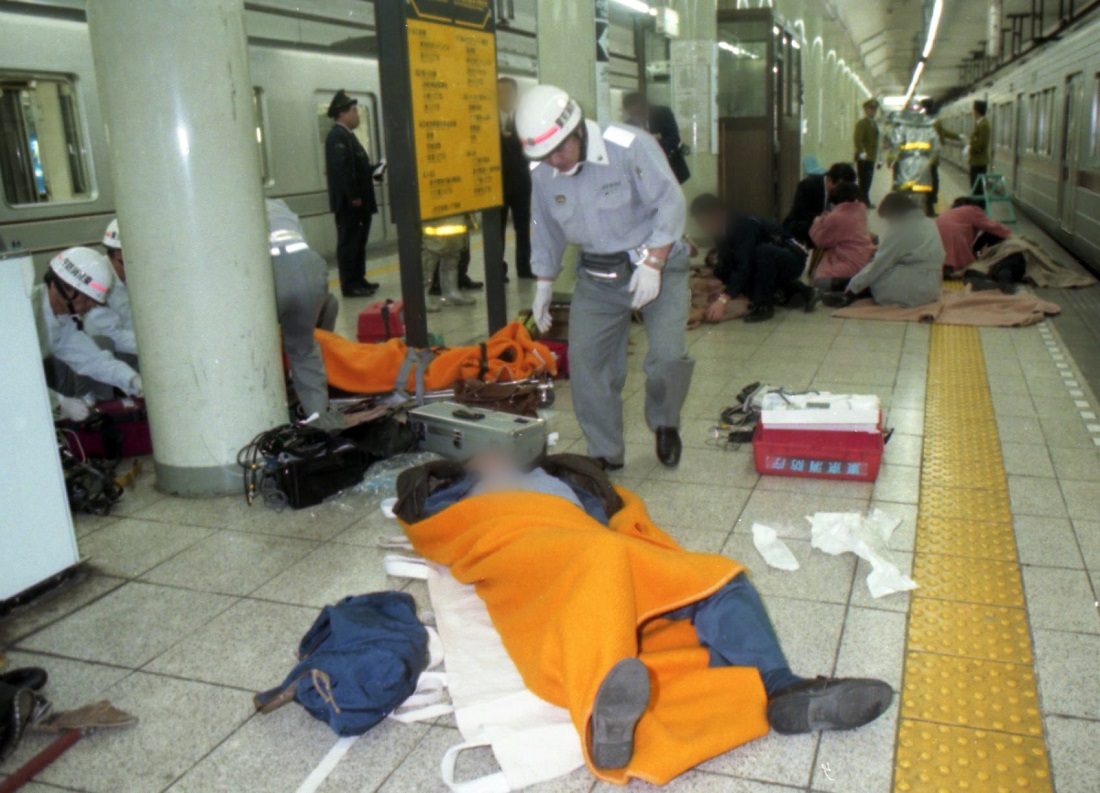 It has been 27 years since the sarin gas attack on subways in the heart of Tokyo.

During rush hour on the morning of March 20, 1995, domestic terrorists dispersed the extremely toxic liquid nerve agent sarin in five cars on three subway lines running through the Kasumigaseki district, where the headquarters of several central government ministries and agencies were concentrated. As a result of the chemical attack, 14 people died and more than 6,000 others suffered physical problems, some serious.

This attack on the center of Japan’s capital was an unprecedented case of indiscriminate terror. The aim of the cult that perpetrated the atrocity was nothing less than the overthrow of the Japanese government, as shown by the fact that it had purchased a military-use helicopter and automatic small arms from Russia.

The name of the cult was Aum Shinrikyo. In the wake of a series of deadly crimes carried out by its members on orders from its leader Shoko Asahara, born Chizuo Matsumoto, Asahara and 12 of his disciples were later sentenced to death. Their executions were carried out in July 2018.

Although 27 years have passed since that fatal March morning, the sorrow and pain of family members of those killed in the attack and surviving victims continues unabated, with many survivors still suffering from impaired vision and other after-effects. For them, that terror attack never ended.

On March 20, Shizue Takahashi, the widow of a subway employee who died in the attack, could be seen laying an offering of flowers at the Kasumigaseki Station on the Tokyo Metro.

She said she was afraid that the public would forget the horror of that day. “What I most hope to achieve through my activism is to tell young people [about the incident]. I hope to do so one step at a time.”

The government and related organizations too need to let the world know what happened in the subway attack, which was an exceptional case in which the nerve center of a nation was subjected to chemical terrorism.

After all, at this very moment Russia continues its invasion of Ukraine, with the chances rising of an attack with biological or chemical weapons on the capital of Kyiv or the port city of Mariupol in the southeast region of the country.

Russia has been spreading false reports alleging that the United States and Ukraine have been jointly developing biological and chemical weapons. US President Joe Biden says that these reports are a clear sign that Russia is itself considering using such inhumane weapons.

If biological and chemical weapons like sarin are employed even once, it will cause enormous suffering among the civilian population and stymie relief efforts. It would also constrain the efforts of Ukrainian authorities to maintain operation of transportation systems and other vital infrastructure, and prolong the horrendous conditions their people are enduring.

Russian President Vladimir Putin is obviously incensed about how his war on Ukraine is not proceeding as he had expected. There is therefore growing concern that he might resort to the use of tactical nuclear weapons in addition to biological and chemical weapons.

Japan is the only nation that has suffered an atomic bomb attack. And its capital has also experienced chemical terrorism. The unfolding tragedy in Ukraine should not be viewed as just a conflict on the distant continent of Europe. Japan must give deep thought to the situation and then do the things that we are able to do.

Keeping the memory of the sarin subway attack alive is certainly one of those things.