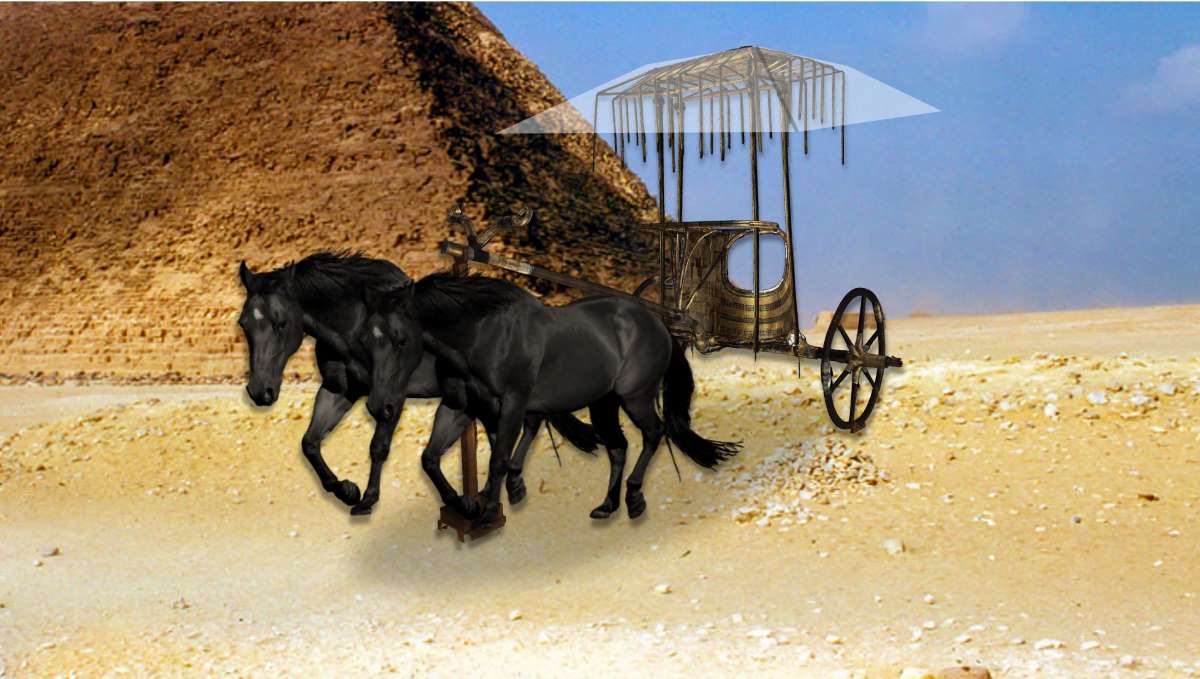 Three-dimensional rendition of the canopy and two-wheeled carriage excavated from the royal tomb of Tutankhamen. (Courtesy of Oishi Laboratory, University of Tokyo, The Grand Egyptian Museum, (GEM), and Japan International Cooperation Agency (JICA).

These technologies are used not only for research-related discoveries, but also for the preservation, exhibition, and restoration of cultural assets. We are at the forefront of using the latest technology for research into the ancient world.


Restoration of the ‘Second Solar Boat’

2022 marks the 100th anniversary of the discovery of Tutankhamun’s royal tomb. The Grand Egyptian Museum, which aims to open in Egypt in the latter half of 2022, will house the artifacts such as the relics of Tutankhamen, and Japanese researchers have cooperated in the preservation and restoration of these valuable cultural properties.

Associate Professor Takeshi Oishi of the University of Tokyo (Spatiotemporal Media Engineering) and others collaborated with the Egyptian researchers to measure the artifacts in 3D. While analyzing the collected data, they discovered that a canopy and a two-wheeled carriage, which had been displayed separately, were in fact a set.

There had already been a theory that the carriage had a canopy, but it was difficult to confirm because there was risk of damage in attempting to combine the real artifacts. Using the 3D data and virtually fitting the two components showed that they matched perfectly.

The new museum is considering an exhibition method that would allow visitors to see the images of the restored canopied carriage on their smartphones.

The “Second Solar Boat,” found near King Khufu’s pyramid is also a focus of Dr. Oishi’s restoration effort. The massive wooden ship was built about 4,500 years ago, but the parts have fallen apart and deteriorated over time. Dr. Oishi has been measuring parts that have deformed due to scrapes or shrinkage, and simulating the original structure using 3D data. In the future, he plans to restore the boat by connecting the excavated parts.

For over 20 years Dr. Oishi has been working on 3D measurement and analysis of various archaeological sites and cultural properties, such as the Great Buddha of Todaiji Temple in Nara and the Bayon Temple of Angkor in Cambodia.

At the Baryon Temple, a large amount of the face of the carved statue remains. Art history experts have determined which spirits are represented by referring to the shapes of their jaws and eyes, but Dr. Oishi and others have developed a method for classifying them using objective, measured data.

In addition, the temple may collapse due to weathering. Using 3D data and a 3D printer, a model of the temple was made, and a wind tunnel experiment was conducted to determine what sort of damage would occur from the direction and speed of the wind.

The temple has been measured nearly every year for over ten years, and the changes over time have been recorded. Analyzing the aging process and effects of restoration efforts has contributed to the preservation of the remains.

In the future, continued research into robots that can carry out measurements will be important so that a lot of data with consistent quality can be collected, according to Dr. Oishi.

Professor Takeshi Inomata (Mayan Archeology) of the University of Arizona made a significant discovery by taking 3D measurements from the sky. By irradiating a laser beam from a plane and determining the height differences of the ground surface from the differences in the reflection time, he discovered in southern Mexico the “Aguada Fénix” (Phoenix Reservoir), the largest and oldest large-scale structure in the Mayan civilization.

The remains measure 1,400 meters in length, 400 meters in width, and 10 to 15 meters in height, and form a rectangular open area. It seems to be a place where many people gathered to perform ceremonies. The ruins are so large they look like natural terrain from the ground.

The method of searching for archaeological sites using observation data collected from the sky, such as aerial photographs and images taken by satellites, is sometimes called space archeology. However, in the area where the Mayans lived, there are many tropical rainforests, and thick vegetation has blocked the line of sight.

Laser and data processing technologies have developed and have been used in this region since around 2015.

Since it takes time to walk on the surface of the earth to survey and make a map, only a limited area can be investigated. “I could only see about 1 square kilometer at most, and I couldn’t grasp the whole picture of the [ancient] society,” said Dr. Inomata.

Measuring from the sky allows for investigation of a large area at once. Compared to making a map by walking through the jungle, struggling 100 meters at a time  while watching out for poisonous snakes, Dr. Inomata calls measuring aerially “another world.”

Around the Aguada Fénix, more than 30,000 structures were found by analyzing data of about 80,000 square kilometers. There is a limit to how much humans can check vast amounts of data. The development of methods that use artificial intelligence to classify the structures is also being pursued.

The Aguada Fénix is ​​believed to have been built between 1100 and 700 BC. This was before the establishment of cities and dynasties.

The idea that such large-scale structures cannot be created without the existence of hierarchical organizations has been deep-rooted. But the discovery of this site indicates that ancient people may have voluntarily gathered to accomplish the work. Dr. Inomata says, “This kind of understanding gives us important implications about human capability.”


The Progression of Humanity

In contrast to archeology, which mainly deals with excavated remains, biological anthropology focuses on humans themselves, by examining human bones.

Gender and age can be inferred from the shape and size of bones and teeth, and deformities remaining in bones can be investigated. There are also analyses using computed tomography (CT) scans.

In addition to these methods, DNA analysis has recently developed as a powerful tool in anthropology.

For example, even if the size of bones suggests a person had a small physique, it cannot be known whether they had a small build due to genetics, or because of nutritional or environmental effects. Examining the genetic material may reveal the reason.

It was found that DNA remained in old human bones in the late 1980s, and it became possible to analyze it. However, in the early stages, the DNA of the mitochondria, an organelle in the cell, was analyzed, and only the genetic information from the mother’s side was known.

It has been possible to analyze nuclear DNA from around 2010, with the advent of the “next generation sequencer,” a device that can read a large amount of DNA sequences at high speed. This methodology makes it possible to examine the genetic information inherited from both parents, and applications using the device have progressed rapidly.

The first major achievement of this method is the discovery that the extinct Neanderthals crossed with the ancestors of modern humans, and some of their genes are still inherited.

Genetic information directly tracks the origins of a modern human population and where they’ve been, how ancient peoples crossed lands and spread around the world, and the accompanying spread of civilization and language.

Kenichi Shinoda, director of the National Museum of Nature and Science (Molecular Anthropology), points out that “there will be more research in collaboration between anthropology and archeology.”

This is because the DNA found in surrounding bones can help determine why a certain artifact was found there, showing whether the object itself was simply brought from another location, or if the people who created it also moved.

If the genetic relationships of the people found in the ruins are investigated and the DNA of genetically distant people found to be mixed in, it can be inferred that there were interactions with different groups.

Information about the characteristics of a person’s hair, and the color of his or her hair and eyes, can also be obtained from DNA analysis. Combined with information like the physique, which can be found from the shape of the bone, the appearance of an ancient person can be more realistically restored.

The DNA of pathogens such as bacteria and viruses can also be found in human bones. There are studies that follow how infectious diseases, such as the plague and tuberculosis, once spread and mutated.

However, Dr. Inomata warns of attention being focused only on cutting-edge technology, and says that “survey and excavation in the field should not be neglected. Close research is important.”

Research is expected to elucidate the origins and steps of humankind by combining both traditional and technologically-advanced methods.