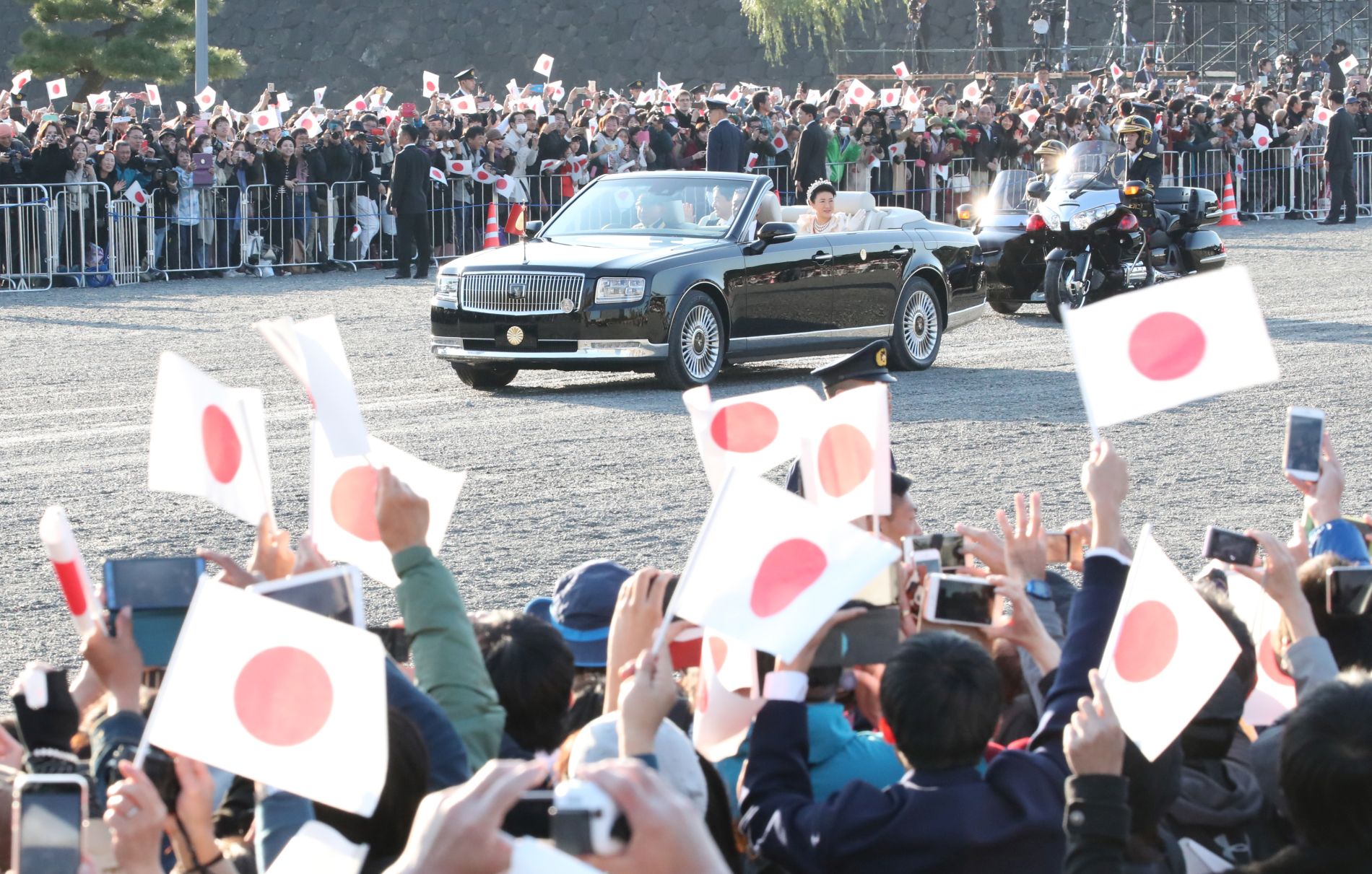 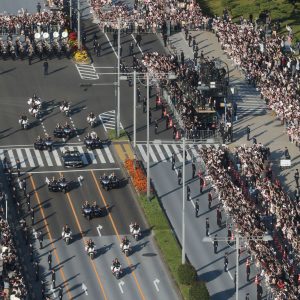 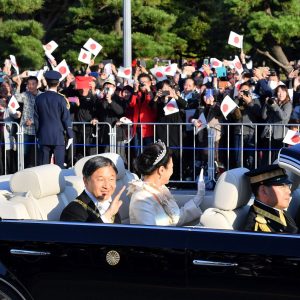 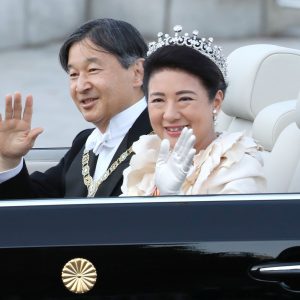 How many times does one think, “If I don’t see this event now, I might never get a chance to see one again”?

An estimated 119,000 people headed to central Tokyo to find a place to stand around the area of the Imperial Palace on November 10, hoping for the slightest chance to get a glimpse of the Emperor Naruhito and Empress Masako in their first official parade as symbols of Japan. In the glorious sunshine of the Sunday afternoon, the Emperor wore an elegant suit, and the Empress a long white dress with frilly collar and a tiara.

The couple smiled and greeted onlookers, who waved little Japanese flags as with the song “Reiwa” softly playing in the background. The excitement was palpable, with people cheering, their smartphones raised to document the once-in-a-lifetime event.

The Empress appeared to shed a little tear, as captured by networks towards the end of the parade.

This concludes the five ceremonies of enthronement of the new Reiwa Emperor, who ascended the Chrysanthemum Throne on May 1, 2019, after his father Akihito abdicated on April 30.

JAPAN Forward and Sankei Shimbun joined the thousands who braved the crowds to observe the historical event and pick up some of the reactions on the ground.

Shizuyo Fujii, a 49-year-old part time office worker, had lined up since 4:30 A.M. in the square in front of the Imperial Palace. He managed to secure a space in the first row with his video camera. Coming from Ibaraki Prefecture, he excitedly told The Sankei Shimbun, “I wanted to make this an experience I would cherish all my life.”

Sanae Hisae, 71, from Nagahama City in Shiga Prefecture, told a Sankei reporter: “Being able to see the smile of the Emperor and Empress, it really moved me. I also hope that the Reiwa era will be one of peace.”

Michiko Uchida, 76, a housewife from Saitama Prefecture, told us, “I waited three hours, and was only able to see for one second.”

It certainly was a busy day on Twitter as people shared their excitement and the pictures they took of the imperial couple passing by.

I was able to see the celebration parade from a distance.#祝賀パレード pic.twitter.com/jNmf3cpniG

Many onlookers also documented the crowds. For example, surrounding stations, such as Gaienmae, Aoyama-Itchome, were unusable for at least 30 minutes after the parade due to congestion.

But even those who didn’t attend shared their thoughts on the imperial couple.

The Story of Disappointed Parade-Goers

Given the incredible excitement in the lead up to the parade, there were also many who didn’t manage to see the Emperor’s car when it passed by.

Some people were late making their way to the course. In addition, the tight security had an impact on the length of time it took people to get into the designated viewing areas. There were 40 checkpoints at 29 locations carrying out security inspections, including metal detectors and bag searches, with those closest to the imperial palace opening at 8 A.M.; in the Hibiya portion of the parade course, at about 11 A.M.; and finally in the area near Akasaka Mitsuke, at noon.

A mother and daughter who came all the way from Shikoku, Takamatsu, wiped sweat from their brows as they got out of the crowd. The mother, Yumi Komatsu, told JAPAN Forward: “I didn’t manage to see a thing, I was just watching it live online with the guy next to me. But I thought I wouldn’t get another chance to see this so I thought I would give this a shot…. I could hear the music and feel the atmosphere though.”

Predictably, there were complaints about lines being jammed, and many watched the procession streamed online.

Some, however, were not discouraged by their inability to see the parade. A 71-year-old from Adachi Ward, Tokyo, said it was a difficult event to attend for people of old age as they couldn’t stand for a very long time and needed access to toilets. He and many others still braved the situation to get a glimpse of the Emperor. “Despite everything, one doesn’t really understand the atmosphere if you don’t come here. The crowds, the madness. It was worth it!” he said.