Are We Witnessing the Collapse of South Korea’s Democracy? 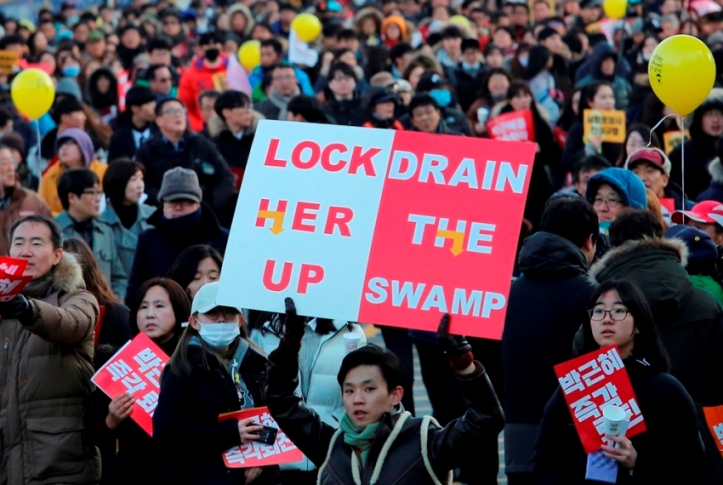 Amidst the ongoing impeachment proceedings of President Park Geun-hye, South Korea’s premodernity has unfolded itself, rather surprisingly to the world at large. She has been impeached for influence-peddling and corruption connect to her close confidant who had no official government position. Their relationship is based on President’s early devotion to the confidant’s father, a shamanistic-Evangelical cult leader, who she believed was able to communicate with her assassinated mother’s soul.

Circumstances have demonstrated that the impeachment proceedings, as well as Park’s legally-nonbinding conditional statement on resignation, were more consequent on the massive popular demonstrations rather than on orderly public discourse centered on deliberation in the National Assembly. Evidently, there exists no deeply entrenched practice of observing the country’s constitution that guarantees presidency unless impeachment proceedings are required.

Behind this entanglement, the government in Seoul has suffered from a latent legitimation crisis since the very beginning. The country’s independence was brought simply by the windfall of Imperial Japan’s defeat at U.S. hands, not won by a war of independence against the suzerain. Ironically, the Pyongyang regime has more credibility in this regard due to its anti-Japan guerrilla skirmishes that have since been mythologized as robust resistance.

Seoul’s legitimacy rested instead primarily on economic performance based on export-led growth and its trickle-down effects, reaching the level of developed economies in the 1990s. Yet, with other newly industrializing economies quickly catching up, not least of all China, South Korea has rapidly lost its niche in international markets and experienced a serious hollowing-out of its manufacturing sectors. Consequential unemployment and underemployment turned out to be the hotbed of the mass demonstrations against Park.

Successive South Korean presidents, once they become lame ducks, have continually taken advantage of the unflinching popular resentment against prewar Imperial Japan and resorted to the anti-Japan card. It is temporarily effective to divert popular discontent while enabling transitory rallying effects. Yet Park began making full use of the card once in office even while facing the country’s already deep economic and political predicament. This cut her margin for error in domestic politics, necessitating her to vainly play strategic acrobatics on the Korean Peninsula.

Having become increasingly dependent on China as a market for exports and investments, Park carelessly formed a diplomatic alignment with China, which also suited her focus on Japan history questions in general and the Comfort Women issue in particular (Seoul recognizes them as sexual slaves and Tokyo as wartime prostitutes). This antagonized not only Japan but also its sole security guarantor, the United States, particularly against the backdrop of deepening Sino-American geostrategic rivalry, centered on the East and South China Seas.

The United States’s sense of antagonism will inevitably increase once the need for trilateral security policy coordination with Japan and South Korea becomes acute —especially if North Korea once again engages in military-political brinksmanship involving nuclear and missile tests. The Obama administration nudged Tokyo and Seoul towards reaching an agreement on the Comfort Women issue after North Korea’s two nuclear tests in January and September 2016. The Obama administration also pressed Seoul to accept deployment of the Terminal High Altitude Area Defense (THAAD) missile system on its soil to counter a possible attack from the North. Seoul’s lukewarm acceptance of the system (which began its deployment on March 6) considerably irritated Beijing given their perception that it will weaken the effectiveness of their nuclear deterrent, which has led to various political and economic retaliations against Seoul.

Tokyo and Seoul concluded their agreement in December 2015, labelling it as the final political settlement of the Comfort Women issue, centered on additional Japanese financial support for the women and Seoul’s best efforts to remove a Comfort Women statue in front of the Japanese Embassy in Seoul. The agreement is a supplement to the final legal settlement of the issue that was already achieved in the Japan-South Korea Normalization Treaty of 1965. This means that if Seoul tries to bring up the issue again as excuse to dodge trilateral cooperation, South Korea will surely jeopardize its relationship with Washington.

Leadership in South Korea acting under an acting president is adrift, caught between the United States and China, or a rock and a hard place and remains unable to honor the 2015 agreement with Japan. With the demise of Park’s presidency expected to signal the demise of Korea’s conservative forces along with it, Korea’s next president will almost surely take a softer line towards North Korea and will likely pursue anti-Japan and anti-U.S. policies that will only serve to endanger its alliance with the U.S. On top of this, the South Korean masses are fully incited, as shown by the prolonged anti-Park demonstrations, with their forces organized and financed as evidenced by the huge digital display panels and other logistics facilities.

The United States and Japan have to prepare for the wildcard of a rogue South Korea. Simply applying pressure on the moribund Seoul regime and/or its military, as Secretary of Defense James Mattis did in his recent visit to Seoul, helps little. Japan and the United States may be forced to begin thinking of alternative regional security architecture should they “lose” liberal-democratic South Korea.