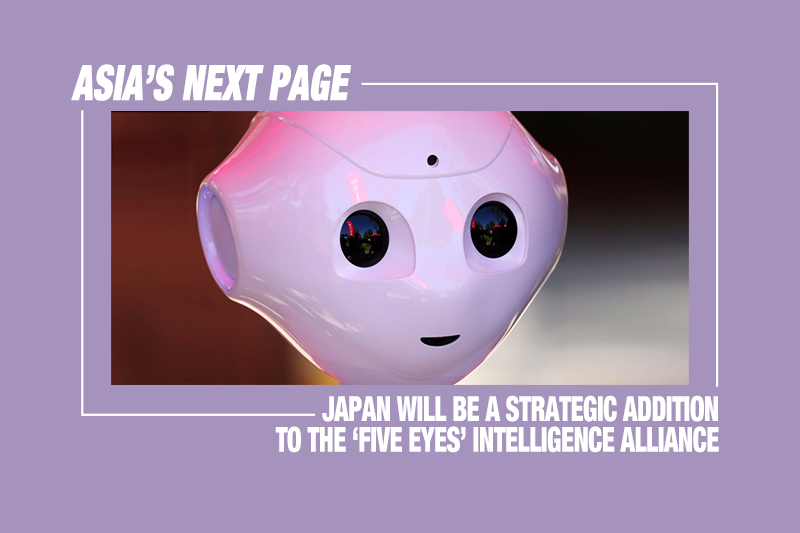 In an interview with the Nikkei Asian Review, published on August 14, Japanese Defense Minister Taro Kono emphasized the country’s long-standing interest in pursuing a closer intelligence partnership with the “Five Eyes” alliance.

Taro Kono contended for the expansion of the framework along mutual strategic interests: “These countries share the same values. Japan can get closer [to the alliance] even to the extent of it being called the ‘Six Eyes.’”

In the post-pandemic world, divisions between democratic and non-democratic countries are rapidly intensifying amid the increasingly tense geopolitical security environment. Hence, Japan’s public display of such aspirations strongly denotes its interest in building powerful and resilient security partnerships against long-standing security concerns, like the People’s Republic of China (PRC) and the Democratic People’s Republic of Korea (DPRK).

Commonly referred to as the FVEY, the “Five Eyes” grouping comprises the United States, the United Kingdom, Canada, Australia, and New Zealand — the “Anglo-Saxon” allies. Through the FVEY, they share, by default, all their raw and unprocessed signals intelligence (SIGINT), including the methods and techniques relating to SIGINT operations.

The cooperation dates back to the security partnerships forged between the U.K. and the U.S. during World War II, resulting in the UKUSA Agreement of 1946 (the treaty was revised in 1955). Although the group initially shared information on the military activities of the Soviet Union, members of the Warsaw Pact, and China, it has since evolved into a global surveillance network, especially for counter-terrorism purposes.

It successfully shared intelligence during the Vietnam War, the Gulf War, the Falklands War, and the military operations in Libya.

Over the last few years, there has been talk of the club’s expansion, but the pandemic seems to have hastened the discussion. Even in the pre-COVID period, a top U.S. congressional committee in 2019 sought to incorporate the democratic countries of India, Japan, and South Korea into the “Five Eyes” grouping. However, as the novel coronavirus reveals the democratic Western world’s key vulnerabilities, especially its significant dependency on China, the “Five Eyes” have begun to actively engage in an expanded partnerships with democratic countries, such as Japan, France, Germany, and South Korea, including deeper economic and diplomatic ties alongside an intelligence alliance.

For Tokyo, a prospective inclusion in the FVEY comes as a welcome initiative, particularly in view of sharing intelligence on and monitoring the military and cyber activities of China and North Korea. China and North Korea’s provocative military and security adventurism has been at the top of Japan’s security concerns for some time now. Japan’s annual defense review in 2019 listed China as a bigger threat.

In light of Japan’s glaring security vulnerabilities, an assured military backup against unwanted threats from China and North Korea certainly offers the country crucial security guarantee. However, the intent to join the FVEY highlights not only Prime Minister Shinzo Abe’s ambitious security-military outlook, but also Japan’s long-term vision to influence and partake in a quest for leadership, venturing into the rapidly evolving global politics vis-à-vis China.

After World War II, Japan, under its new Constitution, was not allowed to have offensive military forces. Japan renounced “war as a sovereign right of the nation” and adopted the “Yoshida Doctrine” (named after former Japanese Prime Minister Shigeru Yoshida), which prioritized economic recovery and aligned with the U.S. in defense and security matters.

Japan’s intelligence apparatus was totally dismantled. And, for the past 75 years, Japan has persisted with its pacifist pledge.

However, in response to China’s growing military might and North Korea’s belligerence, Abe has bolstered Japan’s defense capabilities in his second term, though the pacifist Constitution has as yet not been amended. Tokyo’s latest national security strategy has revamped its intelligence capabilities so as to project its power status as a regional leader and to defend its interests.

This shift in strategy has been accompanied with a growing public debate on Japan acquiring first-strike capabilities and re-establishing a comprehensive intelligence apparatus. Bolstering security is no longer a topic off-limits but a part of public discourse.

Importantly, the first-strike capabilities are being considered as an alternative to the U.S.-based Aegis Ashore ballistic missile defense system, in the event of the government’s monumental decision to cancel the deployment due to the huge costs involved.

This trend in public opinion was reflected in Japan’s defense white paper in 2020 as well. The document highlights the deteriorating regional geopolitical situation and, as a result, prioritizes Japan’s need to strengthen its military capabilities in maritime, air, land, space, and cyberspace sectors.

Furthermore, the ruling Liberal Democratic Party (LDP) recently prepared a proposal for Japan to acquire strike capabilities to halt ballistic missile attacks on Japan within enemy territory. The recommendations will be discussed by Japan’s National Security Council likely by the end of 2020.

These developments fall along the lines of Abe’s security reforms, which aim to take Japan a step closer to revising its post-war pacifist agenda. If anything, a proactive and a nationalistic defense posture being highlighted under the Abe administration stimulates Japan to venture into the FVEY, if only to cater to its own security concerns amid an increasingly uncertain strategic environment.

Despite not being a formal member, Japan has been collaborating with the network since 2018. Japan’s official involvement with the FVEY will certainly boost Abe’s security objectives for the nation. The goals of the alliance are in line with Japan’s larger vision in the Indo-Pacific — a “free and open Indo-Pacific” — where the latter is seeking to expand its footprint and project its status.

Moreover, some members of the FVEY already cooperate bilaterally and mini-laterally with Japan in matters of security. For example, the U.S.-Japan Treaty of Mutual Cooperation and Security, signed in 1960, facilitates mutual defense obligations wherein Japan acts as the “shield” while the U.S. plays the role of a “spear.”

Additionally, in July 2020, Japan signed a pact for intelligence sharing with India, Australia, and the U.K. in an effort to not rely solely on the U.S. for its security needs. Japan also conducts regular naval exercises with India and Australia.

Nonetheless, the FVEY framework will allow Japan to establish a more efficient intelligence-sharing structure as compared to bilateral SIGINT cooperation treaties, while also allowing it to acquire highly classified intelligence at an earlier stage.

Conversely, such an arrangement will benefit from Japan’s extensive intelligence network, mainly in the East Asian region, to monitor (and possibly counter) China’s growing military expansion. Amid growing diplomatic tensions over Hong Kong, Taiwan, and the South China Sea during the pandemic, the FVEY states seek to capitalize on information possessed by Japan. Moreover, despite the fact that Japan’s inclusion as a “Sixth Eye” is far from formalized, the strategic narrative in China already wants Beijing to be “fully alert.”

In the post-COVID-19 period, which has exposed the West’s utter dependence on Chinese supply mechanisms, the Five Eyes alliance is looking to expand its scope by focusing on economic and political cooperation alongside intelligence, with the broader aim of reducing, if not ending, Western reliance on China. Incorporating countries like Japan, India, and South Korea to form a trusted supply chain network has hence figured as a prominent suggestion.

Including Japan in the club and forming a FVEY free trade bloc are viable possibilities in the near future to begin the West’s economic decoupling from China. Importantly, China’s attempts to upend the existing U.S.-led liberal international order — by weaning itself off its dependence on the U.S. dollar and launching a digital renminbi — must be monitored closely, and countered.

Moreover, Japan’s addition will bring political credibility to an alliance which has thus far been perceived as an elite club of English-speaking Western countries with negligible or erroneous understanding of the East.

Nonetheless, the world of intelligence, spy craft, and espionage is inherently characterized by distrust. Therefore, sharing delicate information on multilateral platforms is immensely tricky, as states are at risk of their intelligence being compromised.

Many experts believe that Japan’s formal inclusion to the FVEY could jeopardize the network and that Tokyo’s relatively underdeveloped counter-intelligence apparatus could, in fact, paradoxically “expand the attack surface for adversarial countries seeking to compromise intelligence shared among the group.”

Despite this risk, the strategic advantages of Japan’s addition to the grouping cannot be denied. If Tokyo can gradually bolster its counter-intelligence capabilities and prove its ability to maintain a tight hold over shared intelligence and processed assessments, Japan can emerge as a welcome “sixth eye” in the framework, especially under the current fragile global security environment.

Dr. Jagannath Panda is a research fellow and center coordinator for Manohar Parrikar Institute for Defence Studies and Analyses, New Delhi. He is also the series editor for Routledge Studies on Think Asia. Dr. Panda’s most recent publications include India and China in Asia: Between Equilibrium and Equations (Routledge, 2019) and Scaling India-Japan Cooperation in Indo-Pacific and Beyond 2025: Corridors, Connectivity and Contours (KW Publisher, 2020). Follow him on Twitter (@jppjagannath1).