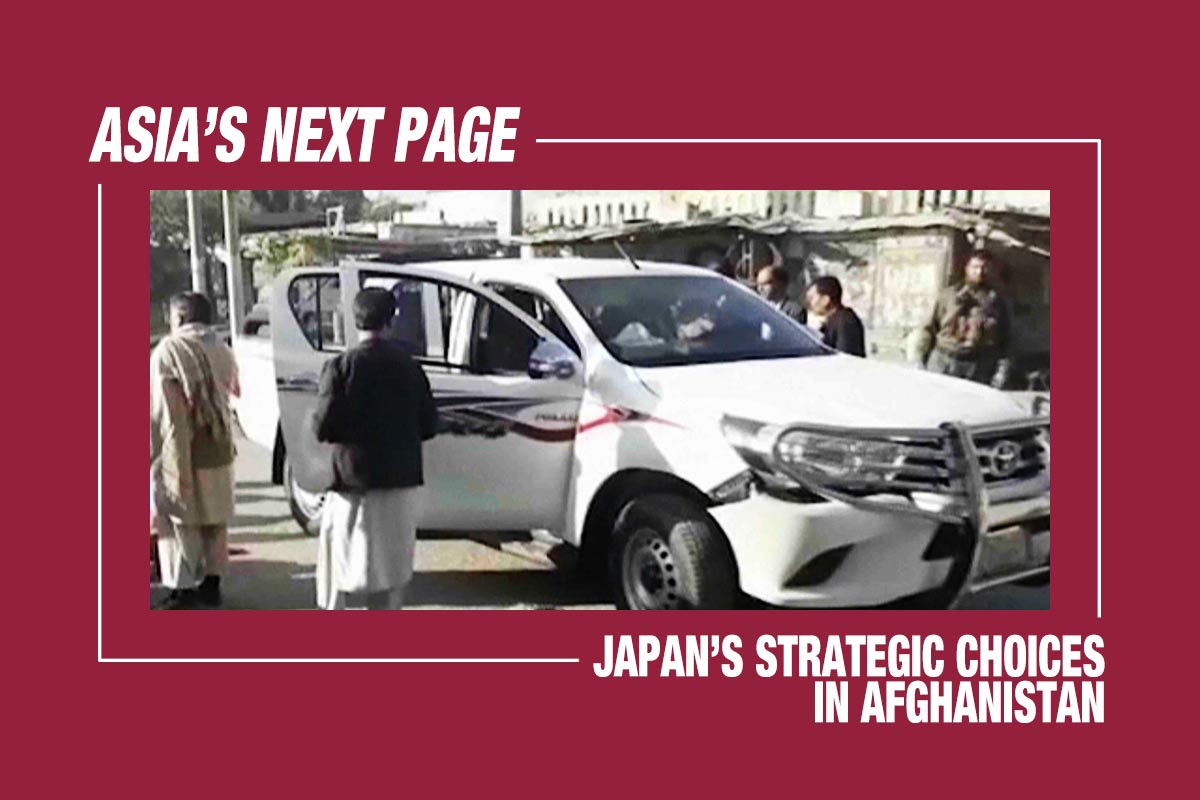 Concern about Japanese aid to Afghanistan in wake of U.S. pullout.

As the situation in Afghanistan unfolds, powers across the region, including Japan, are observing the developments with much caution. Although not always explicitly visible, Tokyo has a considerable strategic interest in Afghanistan, mainly in alignment with its alliance partner, the United States. To keep its economic interest in the region alive, Tokyo has pursued a cautious approach in terms of responding and visualizing the rapidly changing security environment in and around Afghanistan.

Officially, the Japanese government has shown a preference for an “inclusive government” in Afghanistan, supporting the truce between President Dr. Mohammad Ashraf Ghani and former Chief Executive Dr. Abdullah Abdullah. Furthermore, it has openly supported the peace process in the country by advocating for a “durable and comprehensive peace” mechanism, and further called on the international community to help maintain peace and stability in the region. Tokyo not only welcomed the phased troop withdrawal from Afghanistan, but also encouraged an Afghan-led peace process by supporting the U.S.-Taliban agreement signed on February 29, 2020.

Tokyo’s position on Kabul has until now been largely linked with the American presence in Afghanistan. Ultimately, one of Japan’s essential goals in its Afghanistan engagement has been to show fortitude with the U.S. under their Treaty of Mutual Cooperation and Security. However, with the U.S. withdrawing from the region, Japanese policymakers must begin to strategize Japanese presence in a post-U.S. Afghanistan with more focus.

Diplomatic ties between Japan and Afghanistan date back to 1931. The Soviet invasion of 1979 dampened bilateral ties, with Tokyo not ascribing diplomatic recognition to any of the groups in the region. However, the rise of the Taliban in Afghanistan – making it a primary regional security concern – brought about a change in Tokyo-Kabul ties. Japan even offered to hold peace talks between the Taliban and the Northern Alliance.

Moreover, as Afghanistan became a focal point of the international community post-9/11, Japan became a key contributor to peace-building, peace-consolidation, and the reconstruction process, with a focus on development in the country. Building on the seriousness it attaches to the situation in Afghanistan, Japan hosted the second International Conference on Reconstruction Assistance to Afghanistan (ICRAA) in 2002, which aimed to bring together the international community to discuss the rehabilitation of the war-torn country. With the second conference taking place a year after the September 11, 2001 terror attacks on the U.S., Japan held that the impact of terrorist actions (which saw Tokyo markets plummet) was an immediate international threat, in tandem with Washington’s famous ‘War on Terror’ strategy.

Hence, Tokyo’s quest for stability in Afghanistan was partly driven by its status as a responsible member of the international community. To further this agenda, Japan sanctioned its first round of large-scale official development assistance (ODA) to Kabul at $500 million USD  to be implemented until 2005 for reconstruction efforts. Another important outcome of ICRAA was the reopening of the Japanese Embassy in Kabul that was shut down amidst the Soviet invasion. These events marked the start of Japan’s 21st century Afghanistan outlook, which was in line with its goal of projecting a leadership role for its regional power identity.

Even though Japan has not been regularly mentioned in the rhetoric surrounding Afghanistan, it has been a key player in the country since the start of the century, second only to the U.S. in terms of overall financial assistance disbursed.

Japan took on the “lead country” job for one of the five significant security-area reform programs that were presented as the principal mainstays of Afghanistan’s reconstruction and stabilization — the disarmament, demobilization, and reintegration (DDR) program which targeted the assimilation of former soldiers into Afghan culture. Infrastructure and comprehensive rural development have been the key tenets of Japan’s reconstruction assistance in Afghanistan, and this has merged well with Japan’s Expanded Partnership for Quality Infrastructure (EPQI), with the development and improvement of rail and road networks taking precedence. Japan’s massive disbursements for economic infrastructure-oriented assistance, large-scale peace-building, and leading DDR, has successfully situated Japan as an active actor in Afghanistan, alongside countries like the U.S., UK, Germany, and Italy.

In terms of security, Japan has played a major role in the Disbandment of Illegal Armed Groups (DIAG) program, while its Maritime Self Defense Force (MSDF) has supported the Maritime Interdiction Operations (MIO) to prevent the flow of arms via the Indian Ocean. Constitutional limitations of its post-war system prevented Japan from partaking in the U.S.-led counterterrorism military operation – Operation Enduring Freedom (OEF) – and the International Security Assistance Force (IASF) led by the North Atlantic Treaty Organisation (NATO). Nonetheless, Tokyo has time and again contributed via its MSDF. Japanese naval ships have been deployed in the Indian Ocean since 2001, and these have refueled naval vessels engaged in OEF under Japan’s Anti-Terrorism Special Measures Law.

Impact of the U.S. Withdrawal

With the U.S.’s withdrawal and Taliban’s advancement, security dynamics in the country remain highly uncertain. Even as the Afghan government and the Taliban accelerate peace talks, there is increased fighting across the country. The Taliban have seized key border crossings with Iran and Turkmenistan and gained control of Kabul’s border.

Amidst Taliban claims that they control over 85 percent of the country again, Japan’s role in the country requires renewed focus if it is to achieve stability and protect its regional investments. Japan has its own financial interests to look at, such as the reserves of oil, gas, uranium, and more minerals accessible in Afghanistan and other Central Asian Republics. Political uncertainty in Afghanistan hinders worldwide harmony and can be an obstacle to Tokyo’s trade with Central Asia.

Post-U.S. troops withdrawal, Afghanistan is facing a formidable threat of descending into an Islamic State governed by the Taliban or plunging into civil war. International aid and Japan’s humanitarian and ODA assistance here become vital to map the future in a people-oriented manner. Japan’s rural development programs, which have seen success through initiatives like the ‘Peshawar-Kai and PMS’ led by late Dr. Tetsu Nakamura, can be crucial in providing consistency in community creation by providing food and livelihood to the Afghan people, thereby freeing them from dependency on the Taliban. Furthermore, as a country that itself has survived the devastation resulting from war, Japan can provide Afghanistan with support based on shared experiences and guidelines on post-conflict rebuilding.

Afghanistan holds significance for Japan for its geo-political and security prism. Kabul has been reportedly engaging with China regarding extension of the China-Pakistan Economic Corridor (CPEC) to Afghanistan. This would undoubtedly shape China’s entry into a post-U.S. Afghanistan, while also adversely affecting the power balance for many powers in the region, including Japan and its partner India.

Beijing has been looking to include Kabul in the Belt and Road Initiative (BRI) for a long time, but the U.S.-backed Afghan government had refrained from accepting it overtly. Now, talks are reportedly underway about a China-financed road link between Afghanistan and Peshawar in Pakistan via the CPEC. Such economic integration could allow China to fill the power-gap created by the U.S. post withdrawal of its forces.

The China-Pakistan ‘iron’ brotherhood would also allow Islamabad to emerge as a trump card for Beijing in its outreach to Kabul. Ultimately, China could achieve more success than the U.S. in Afghanistan on the grounds of its extensive leverage over Pakistan, though Beijing too might be careful and extremely cautious at present on many issues.

In fact, Beijing will not likely push BRI into an unstable Afghanistan. Peace, be it via the Afghan government or via the Taliban, is crucial to China. Nevertheless, a possibly dominant China in Afghanistan (and the region) would pose major challenges to Tokyo, the Quad, G7, and its regional and bilateral partners.

If anything, China’s rising aggression amidst the pandemic has dramatically changed Tokyo’s dynamics with Beijing. Limiting Chinese economic and political clout in the region is swiftly becoming a priority. Under such conditions, a China-backed Afghanistan tilts the regional balance of power in Beijing’s favor and could seriously jeopardise the campaign for democracy that many powers, such as the U.S., India and Japan aims to promote or advocate in Afghanistan.

Moving forward, regardless of the U.S. withdrawal, Japan has pledged to provide $180 million USD annually in aid to Kabul. This massive investment points to how Afghanistan will continue to feature prominently in Japan’s regional policy nexus.

In hopes of a stable environment, Tokyo will also continue to support peace dialogues between the Afghan government and the Taliban, with the aim of promoting a peace agreement by and for the Afghan people. Simultaneously, Tokyo will want to sustain and nurture channels of communication with both factions so as to ensure it can have a say in the country’s future alongside major players.

Such continued engagement also ties into Japan’s “great power” identity. Maintaining positive ties with both factions can position Japan as an influential player and provide it room for cooperation with strategic partners like India. Afghanistan’s geographic location makes it a strategically, geopolitically, and geo-economically vital state, especially with regards to politics in the Indian Ocean.

Tokyo’s involvement with Afghanistan can therefore act as a fundamental base for Kabul’s eventual involvement in regional and global initiatives in the pipeline — such as the Supply Chain Resilience Initiative (SCRI), the Blue Dot Network (BDN), and Build Back Better World (B3W) — therein positively shaping the regional balance of power. However, such a positive outcome will be dependent on how successfully Japan (and its strategic partners) navigates the complex internal Afghan dynamics that lie ahead.

Dr. Jagannath Panda is a Research Fellow and Centre Coordinator for East Asia at the Manohar Parrikar Institute for Defence Studies and Analyses, New Delhi. Dr. Panda is the Series Editor for “Routledge Studies on Think Asia”.