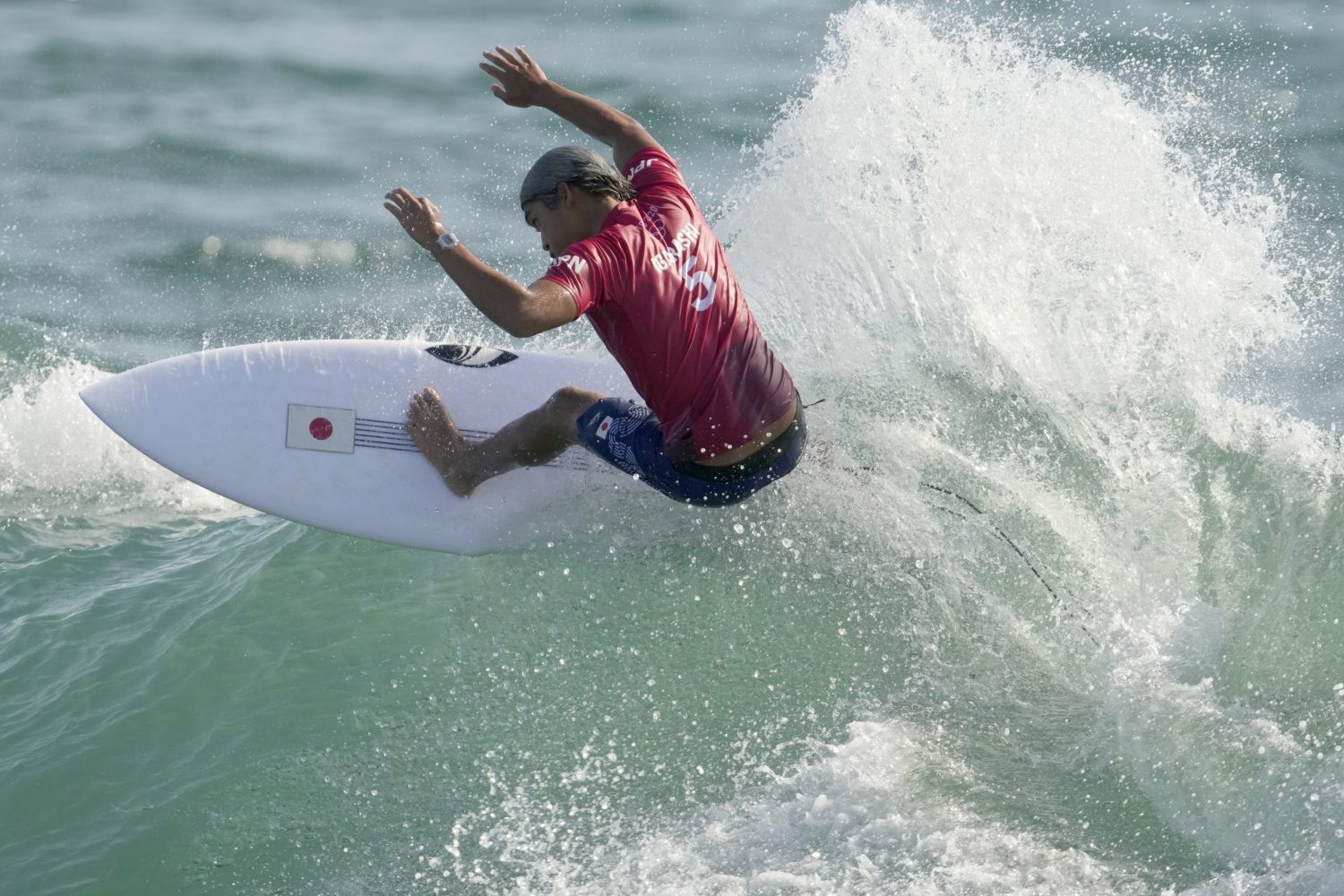 Japan's Kanoa Igarashi performs in the first round of the men's surfing competition on July 25 in Ichinomiya, Chiba Prefecture. (Francisco Seco/AP)

Surfing made its debut as an official Olympic sport on Sunday, July 25, benefitting from solid swells due to an approaching typhoon.

The surfing competition is being held at the Tsurigasaki Surfing Beach on the eastern shores of Chiba Prefecture. The venue is about a two-hour trip from Tokyo by train.

Surfing is among four new sports added to the Olympic program for the Tokyo Games. The others are sport climbing, skateboarding and karate.

The waves at Tsurigasaki aren't normally known for their size, but the approaching typhoon may help produce some larger than normal swells.

Japan is well represented with U.S.-born Kanoa Igarashi and Hiroto Ohara in the men's competition, while Mahina Maeda and Amuro Tsuzuki are competing in the women's bracket.

Japan's medal hope Igarashi got off to a strong start on Sunday, finishing first in his heat, scoring a combined 12.77 points from his two best waves.

“That first wave was really special,” Igarashi said, according to Kyodo News. “Woke up with a lot of pressure, there’s four years leading up to this wave, but as soon as I got that first wave that turned into energy and motivation for me.”

After a 20-year campaign led by International Surfing Association President Fernando Aguerre, the IOC approved the inclusion of surfing in 2016.

Ohara finished 2.27 points behind Brazil’s gold medal favorite Italo Ferreira, who dominated the opening round by taking 15 waves, three more than anyone else. Ferreira finished the day with a high score of 13.67 points.

“I am so stoked. It’s a special event,” Ferreira said. “I have been training a lot for the past couple months, so I am glad to finally be here.

“That was a good heat just to put pressure on [the other competitors] and try to impress the judges, see how they score.

“Being an Olympian is special to everyone, especially the surfers. I am happy to be a part of this history.”

The surfing event will take place over an eight-day window from July 25 to Aug. 1, but can be held over fewer days. According to the Olympic surfing schedule, on days in which competition can go ahead, it will start at 7 a.m.

Even though strict coronavirus countermeasures are in place, many fans could be seen lining a fence to separate the athletes from the public in order to get a glimpse of the action.

Japan, U.S. Remain Unbeaten and Will Meet in Final

Eri Yamada drove in the winning run in the bottom of the eighth inning to lift Japan to a 1-0 win over Canada.

With the win, defending champion Japan booked its place in the gold-medal game where it will face the United States on Tuesday, July 27.

“The opportunity to get a big hit came to me,” Yamada said. “I felt I would get a chance to contribute and was glad I did. We came into this tournament with the intention of winning every game.”

Yamada’s one-out, bases-loaded line drive to center at Yokohama Stadium scored the runner from third and broke the scoreless deadlock.

Japan improved to 4-0 and next faces its archrival, the United States, on Monday, July 26 in its final game of the preliminary round.

Japan once again got solid pitching from 39-year-old ace Yukiko Ueno, who struck out four and gave up four hits over six innings. Miu Goto pitched the final two innings for the win.

Japan won the gold medal the last time softball was contested at the Olympics at Beijing in 2008, beating the U.S. in the final.

The U.S. beat Australia 2-1 earlier Sunday and is also undefeated at 4-0.

Two-Time Olympic Champ Jones Eliminated in Round of 16

Taekwondo legend Jade Jones was ousted from the Olympic competition at Makuhari Messe in Chiba Prefecture in the under-57-kg category in a major upset.

The 28-year-old lost to Refugee Olympic Team representative Alizadeh Zenoorin Kimia, a 23-year-old who was born in Karaj, Iran.

After a strong first round, where Jones scored two kicks at the head (three points), and Kimia had two kicks at the body (two points), Jones yielded several body kicks between the second and third round, and didn’t manage to recover. The final score ended 16-12 in Kimia’s favor.

Jones has inspired an entire generation of athletes in her chosen sport by being the first taekwondoka to win a gold medal in the 2012 London Games. Four years later, she repeated the feat at the Rio Olympics.

Japanese representative Mayu Hamada also lost her bout in the round of 16, coming up against Nigeria’s Tekiath Ben Yessouf.

Kimia progressed well through the rest of the day, narrowly losing the possibility of a bronze medal against Turkey’s Hatice Kubra Ilgun.

Australia maintained its winning ways in the women’s 400-meter freestyle relay, establishing a world record (3 minutes, 29.78 seconds) and collecting the gold in the event for the third consecutive Olympics.

Australia held a 2.3-second advantage over Sweden entering the final leg of the race.

"I believed it when I touched the wall,” he said during a post-race news conference.

“I was so surprised I didn't accept that. I dedicate [the gold] to all my family, my mum, my dad, my sisters, I wish they are proud of me."

Hafnaoui is scheduled to compete in an 800 freestyle qualifying heat on Tuesday, July 27.

DeChambeau Pulls Out Due to Positive COVID-19 Test

American golfer Bryson DeChambeau has withdrawn from the Tokyo Games after testing positive for the coronavirus before departing the United States.

The 2020 U.S. Open champion was set to compete in the men’s golf competition at the Kasumigaseki Country Club in Saitama Prefecture.

“I am deeply disappointed not to be able to compete in the Olympics for Team USA,” DeChambeau said in a statement released by USA Golf. “Representing my country means the world to me and it was a tremendous honor to make this team.”

DeChambeau is the latest big-name athlete to see his Olympic dreams derailed by COVID-19.

DeChambeau will be replaced by Patrick Reed.

“I wish Bryson nothing but the best, and I know how disappointed he is to not be able to compete, and I will do my best to play my best and represent our country,” Reed said in the USA Golf statement.

Masters champion Hideki Matsuyama and Rikuya Hoshino are representing Japan in the golf event which begins on Thursday, July 29.

Spain's world No. 1 Jon Rahm also tested positive for the second time in as many months and was forced to pull out of the Olympics.

Rahm had to withdraw from the USPGA Memorial Tournament in Ohio in June after returning a positive sample, before going on to win the U.S. Open.

Gymnastics legend Simon Biles swept away the competition and ended up first in the all-around results, with a total score of 57.731 points, more than enough to become one of 24 athletes to qualify for the final on Thursday evening, July 29.

For Team Japan, Mai Murakami, delivered a strong performance with a final total score of 53.956 points. She thereby garnered a place at the finals in the all-around category, as well as guaranteeing a place in the floor final.

A native of Sagamihara, Kanagawa Prefecture, who began participating in the sport at age 2, Murakami, now 24, is a four-time all-around national champion. She has also shined on the global stage for many years, winning the floor exercise at the world championships in 2017 and a silver in the all-around event at worlds the next year.

Fournier sank the final go-ahead basket, a 3-pointer, with just a little less than a minute remaining in the men’s preliminary round Group A contest.

On July 18, Japan recorded an 81-75 upset win over world No. 7 France at Saitama City General Gymnasium.

A week later, France avenged that exhibition loss with a spirited performance against world No. 1 USA. Nando de Colo poured in 13 points in the winning effort.

In Group A, the Czech Republic topped Iran 84-78. Group B results from the opening day of the 12-nation tournament are as follows: Italy 92, Germany 89; and Australia 84, Nigeria 67.

Takuya Haneda advanced to the semifinal of the canoe slalom on Monday, July 26 after finishing 11th in Sunday’s heats.

Haneda, the first Japanese and Asian ever to win a medal in Olympic canoeing, finished 8.26 seconds behind leader Matej Benus of Slovakia.

The 33-year-old native of Aichi Prefecture won the bronze medal in the canoe slalom event at the 2016 Olympics.

He is hoping to move up the standings in the semifinal at Kasai Canoe Slalom Centre for a chance to advance to the final on the same day.

Britain’s Adam Burgess was second in Sunday’s heat, 2.75 seconds behind Benus, who clocked a time of 96.89 seconds. Germany’s Sideris Tasiadis was third in 101.23.

There are five gold medals up for grabs; the men’s and women’s individual and team, and the mixed team.

South Korea swept the podium in Rio, winning gold in all four events ー men’s and women’s team and individual.

This time, South Korea defeated Belarus 5-1 in the semifinals.

In the final, Koreans Sam An, Minhee Jang and Chaeyoung Kang teamed up to blank Russia 6-0.

Yoichi Itokazu, competing in the men’s 61-kg category, finished forth, narrowly missing out on the chance of an Olympic medal. This is the same result he obtained in Rio de Janeiro in 2016.

The exciting competition at Tokyo International Forum was wide open until the end.

Itokazu, 30, had started the round successfully by lifting 133 kg in the snatch and 159 kg in the clean and jerk. However, his efforts were stopped at 162 kg, as he failed the lift.

The Japanese was then shortly afterward overtaken by Kazakhstan’s Igor Son, Indonesia’s Eko Yuli Irawan and China’s Fabin Li. Li lifted an impressive 172 kg in the clean and jerk. The Indonesian athlete is now a four-time Olympic medalist, as he won silver in Rio and bronze in the 2012 London and 2008 Beijing Games. Son and Li, instead, made their first Olympic appearances.

Ai Kurogo and Mayu Ishikawa scored 13 points apiece as the Japan women’s squad downed Kenya 25-15, 25-11, 25-23 in a Pool A preliminary round match at Ariake Arena. It was the Olympic opener for both squads.

After finishing in a tie for fifth place at the Rio Games, Japan is aiming to earn a medal on home soil for the second time. The “Witches of the Orient,” featured in this new film, captured gold at the 1964 Tokyo Games.

Japan Strikes Twice in First Half, Holds Off Mexico

Takefusa Kubo scored for the second straight game and teammate Ritsu Doan also found his target in Japan’s 2-1 Group A victory over Mexico at Saitama Stadium.

Kubo put Japan in front in the sixth minute, while Doan was awarded a penalty in the 11th and capitalized on the opportunity.

Japan opened the Olympic tournament with a 1-0 win over South Africa on July 23.

Earlier in the day, the duo competed in the quarterfinals against German duo Patrick Franziska and Petrissa Solja. Mizutani and Ito required extra time to triumph, with the seventh going beyond 11 points in order for a team to win by at least two points. The scoreboard displayed the following score after the final point was recorded: 11-8, 5-11, 3-11, 11-3, 9-11, 11-8, 16-14.

After winning in the semifinals, they will play on Monday, July 26 for the mixed doubles gold medal against Xu Xin and Lui Shiwen of China.