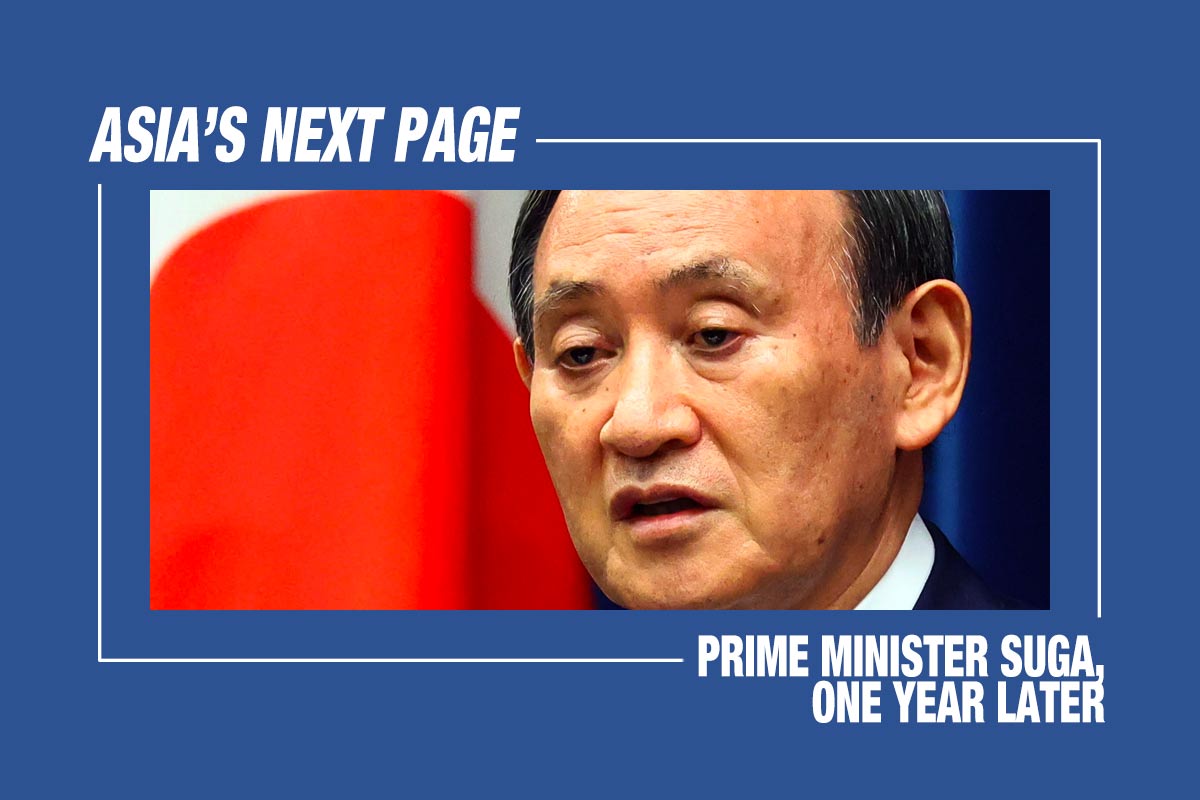 In September 2020, Yoshide Suga was elected Prime Minister of Japan after the rather sudden resignation of former Prime Minister Shinzo Abe, amidst a highly uncertain regional geopolitical, strategic and economic environment further accentuated by a particularly grueling pandemic.

Suga faced not only the challenge of reviving a nation reeling from the ill-effects of the still-ongoing COVID-19 pandemic, but also ensuring stability and continuity in the country’s foreign outlook after the end of the tenure of Japan’s longest continuously serving Prime Minister. Simultaneously, Suga also held the immense responsibility of leading the ruling Liberal Democratic Party (LDP) to victory in the general elections planned for later in 2021.

Now, after almost a year of his leadership and in light of the upcoming Japanese elections, has Suga successfully responded to the international and domestic challenges he faced? How should the world —and Japan itself —evaluate Prime Minister Suga’s one year in office?

In its brief time, Suga’s term has been riddled with challenges that required him to face several strategic choices as prime minister. Domestically, he has had to contend with a recessive economy brought about by COVID-19, management of the pandemic, a nation-wide COVID-19 inoculation campaign in a nation that traditionally holds vaccines in incredibly low confidence, hosting the Tokyo Olympics amidst the pandemic, and garnering political points ahead of the upcoming election.

In taking charge of Japan’s foreign outlook, Suga has, without doubt, accomplished much. For instance, in a sign of Japan’s continued commitment to its free and open Indo-Pacific (FOIP) vision, Suga has strenuously emphasised the same since his first month in office. His first few telephonic conversations with leaders of like-minded countries highlighted his agenda to build on Abe’s legacy and bolster Indo-Pacific institutions—especially the Quadrilateral Security Dialogue (Quad) comprising Japan, the U.S., Australia and India. Further, his first official trip to Indonesia and Vietnam only added credence to his FOIP agenda by building on ties with strategic Southeast Asian partners amid a focus on the Association of Southeast Asian Nations (ASEAN).

Such moves showed an active effort on Suga’s part to build on the Quad narrative as a “continuity” leader — a goal further actualized when Tokyo hosted the highly anticipated second Quad ministerial meeting on October 6, 2020. Report suggests that the meeting was to be initially hosted by India. However, with a change in leadership in Tokyo, the shift of venue to Japan could be interpreted as an attempt to signal Suga’s firm stand against China in light of a changing geopolitical order.

Suga further built his active engagement with the Quad – arguably the Indo-Pacific’s most important and closely watched security grouping at present – by participating and encouraging the actualization of the Quad Leadership Summit, which released “The Spirit of the Quad”, the grouping’s first-ever joint statement, in a major boost to its collective cooperation spirit.

Relations Outside of Asia

Japan-European Union (EU) cooperation has also seen considerable growth, with Suga meeting EU leaders for a virtual summit in May 2021. This consultation saw both sides strongly reiterate their concerns regarding China’s activities in both the South and East China Seas.

Concurrently, a focus on improving bilateral relations with ‘alliance partner’ America under the new presidency of Joe Biden was crucial to Tokyo’s security outlook. With Abe’s personal camaraderie with world leaders being famously regarded as a preferred foreign policy tactic, critics worried that Suga’s comparatively benign exterior would not aid recovery of bilateral and multilateral ties for Japan. However, as seen with the Biden-Suga April 2021 meet, which saw the release of their ‘global partnership for a new era’ –resetting Japan-U.S. ties to a pre-Trump positive equation –Japan’s diplomacy has remained unwavering under Suga’s directives.

Similarly, Suga’s focus on economic multilateralism remained thorough. The Tokyo-led Comprehensive and Progressive Agreement for Trans-Pacific Partnership (CPTPP) is now being vetted by the United Kingdom and possibly Taiwan, while even China has shown interest in joining the same.

Domestically, while ‘Suganomics’ largely continued under the guidelines laid by ‘Abenomics’, Suga’s economic policies were focused on ensuring recovery for Japan’s dwindling economy, which went into recession amidst the pandemic, by injecting stimulus. By February 2021, Japan’s economy had expanded by 12.7 per cent in the fourth quarter (2020), which is more than the projected growth, thus bringing the nation back from its worst recession since the post-war period and allowing it to take forward its economic recovery goals.

Yet, the decision to hold Olympics 2020 amidst immense public backlash – for fear of spread of infections and a heavy toll on economy – has led to recent voter support for Suga sliding to 34 percent, marking the lowest percentage the tally has been measured since Suga took office last September. This is a major cause of worry for the LDP, especially with elections fast approaching in October.

One of Suga’s first major diplomatic tests was –and continues to be –the China factor wherein his foreign policy skills and strategic tact have become crucial. This stands in connection with Suga having to reassure the LDP of not becoming overtly anti-China, especially as LDP Secretary General Toshihiro Nikai has China-friendly dealings.

Nonetheless, crackdown on Hong Kong’s democracy, the Taiwan question, human rights violations in Xinjiang and tensions in East China Sea with China have led to LDP China hawks ultimately supporting, if not asking for a stronger anti-China stand. Importantly, Japan’s 2021 defense white paper has named China and North Korea as the two key security threats to Japan and the international rules-based order, indicating Tokyo’s (as well as Suga’s) strong resolve to stand up to Chinese unilateral aggression in the region.

As Suga’s China policies see hardening, Japan has only accelerated its push for deeper ties with regional “like-minded” powers. India, Australia, Taiwan and France have all emerged in the forefront as a part of this equation. Japan’s continued focus on the SCRI with India and Australia to support the creation of alternative supply chains to limit economic dependency on China – preceded by Tokyo being one of the first countries to move manufacturing out of China amidst the pandemic – is an example of a stronger economic stand by Suga vis-à-vis China.

Meanwhile, Japan has remained actively engaged in trilaterals with France, India, the U.S. and Australia, while engaging in naval exercises like La Pérouse. Furthermore, for the first time, Japan has referenced the Taiwan question in its defense white paper, stating that unprecedented focus on Taipei’s security “with a sense of crisis” is needed. Japan’s support for Taiwan was also visible in its push, alongside the U.S., to bring Taiwan to the G7’s 2021 agenda, thereby assuming a leadership role on the issue on the global platform.

Suga has also made a concerted effort to pitch Japan as a sixth member (most unlikely in near future though) of the ‘Five-Eyes’ intelligence-sharing alliance between Australia, Canada, New Zealand, the U.S. and the UK, in face of China’s growing military capabilities and threat.

Such developments are testament to Suga’s successful maneuvering of a highly volatile geostrategic climate in the region. However, despite this positive trajectory on the global stage, Suga has seen wavering support domestically—with limited success in containing the pandemic and wide public opposition to Tokyo hosting the Olympics in its midst.

Suga’s already ambitious agenda—to manage the pandemic, revive the economy, host the Olympics and strengthen Japan’s posture and position — has been impaired by new COVID-19 variants and a progressively worsening situation (with an unprecedented 10,000 new cases recorded on July 29). With general elections around the corner, Suga and the LDP face a real risk of losing the prime ministerial office and becoming another short-term ‘revolving door’ leader in Japan’s long history of such prime ministers.

At the same time, the stability and longevity of Suga’s leadership is threatened by political infighting in the LDP, which reportedly pits Abe, Finance Minister and Deputy Prime Minister Taro Aso and former trade minister Akira Amari against LDP stalwart and longest-serving Secretary General Toshihiro Nikai. The latter was a major force behind Suga’s appointment and continues to be an influential figure in party politics.

As Suga looks to continue his stint in office and be re-elected as party leader, it will be critical for the self-made, non-faction and non-dynasty LDP leader to balance both blocs and ensure a strong support base. Notably here, Nikai was instrumental in advancing Sino-Japanese ties under Abe’s early tenure, and remains a supporter of engaging with China to cautiously repair ties, putting him at odds with Suga.

Such internal power struggle also puts at risk the LDP’s chances of winning the leadership — an office it has held almost continuously since its formation in 1955. The coming months will therefore be a critical test of Suga’s political acumen as the upcoming elections could decide how Japan’s regional and domestic posturing continues in the coming years.

Dr. Jagannath Panda is a Research Fellow and Centre Coordinator for East Asia at the Manohar Parrikar Institute for Defence Studies and Analyses, New Delhi. Dr. Panda is the Series Editor for “Routledge Studies on Think Asia”. Find his writing on JAPAN Forward at this link.